After tending to mail order duties, I headed down to Waterville Valley to pick up more copies of the WV Guidebook, and to head into the woods for an afternoon hike. With a 1:00 pm start, today's choice was the always entertaining Goodrich Rock Trail, with a bushwhack loop added from the upper end of the trail.

From the Depot Camp clearing on the Livermore Trail, I had a glimpse of South Tripyramid. 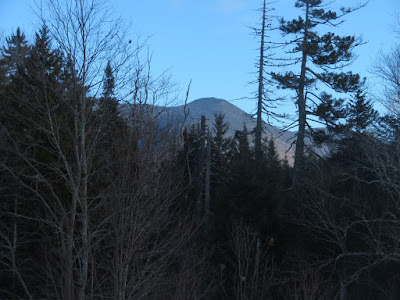 It was a cold and windy but beautiful day. I figured the trails in the Mad River valley would be sheltered from the wind, and there was hardly a breeze along most of the hike. The Greeley Ponds Trail had a thin cover of ice and frozen boot divots. 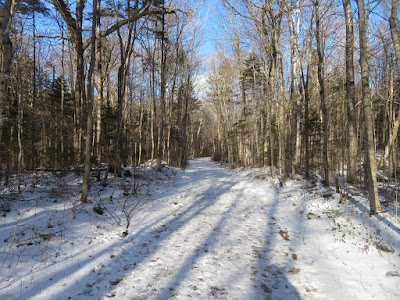 The Mad River was running free. 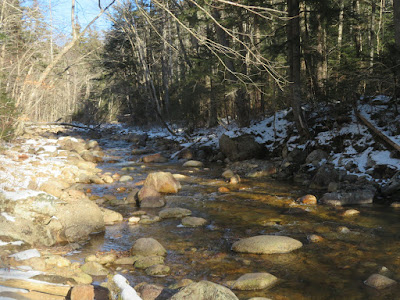 The Goodrich Rock Trail packs much of interest into its short length. 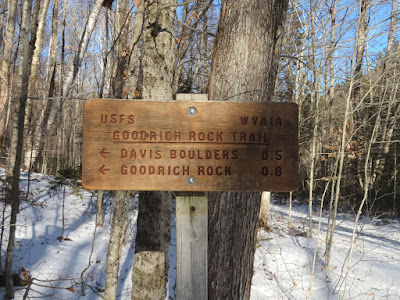 The first of many boulders along the trail. 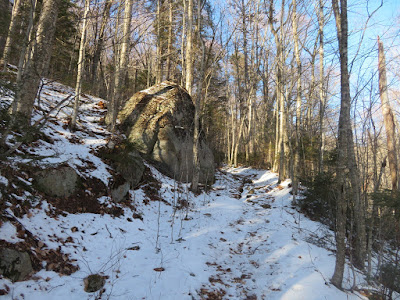 Rock steps ease the way up a steep pitch. 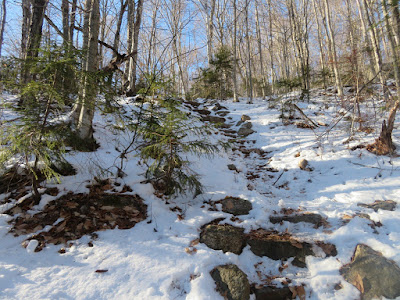 After crossing a tiny stream, the trail winds up through the Davis Boulders. This varied array of glacial erratics on the flank of East Osceola was discovered by Waterville cottage owner J.W. Davis in the 1890s, at which time he laid out the original trail. The rocks seen below are known as the "Corridor Boulders... 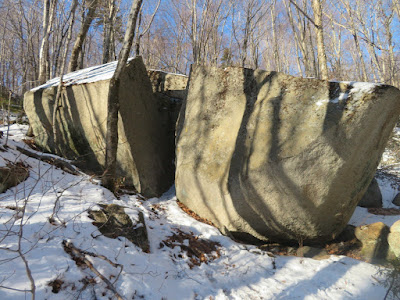 ....because the trail leads right through them. 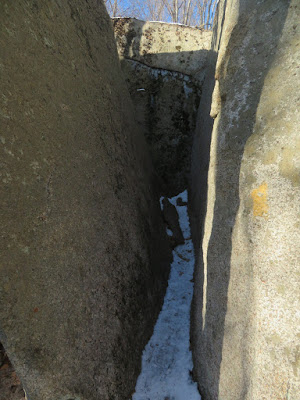 Climbers have dubbed this the "Mayhem Boulder." 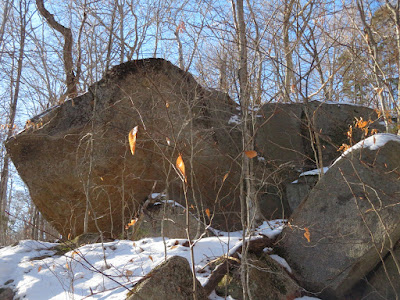 This monster is known as the "House Boulder." 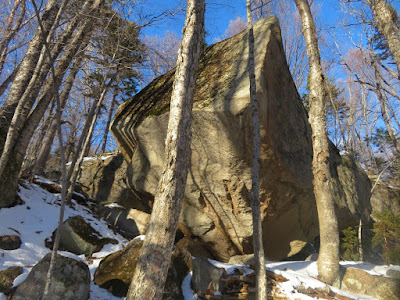 Another passageway along the trail. 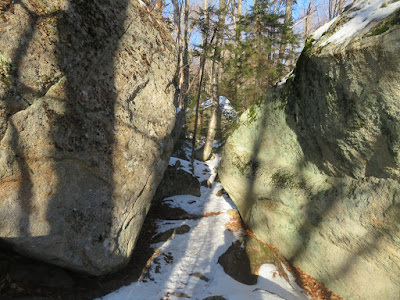 Second in size only to Goodrich Rock, this giant chunk of stone is called the "old Old Wooden Ship." 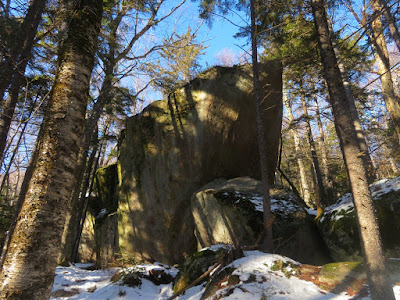 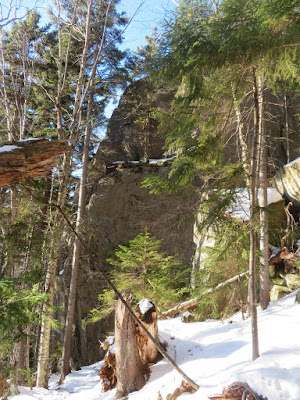 One of NH's largest glacial erratics, it was discovered by Watervilleans Arthur and Charles Goodrich around 1900. 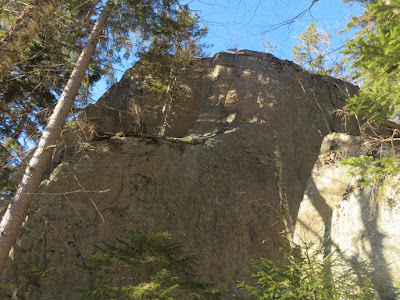 The trail ends at the upper side of the rock, where a 20-foot ladder built by volunteers of the Waterville Athletic & Improvement Association provides access to the top. 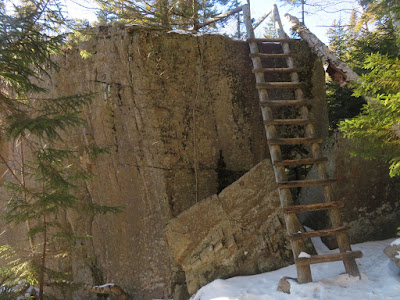 As usually happens when I visit here in winter, the ice at the entrance/exit point at the top of the ladder deterred me from going farther, even with spikes. 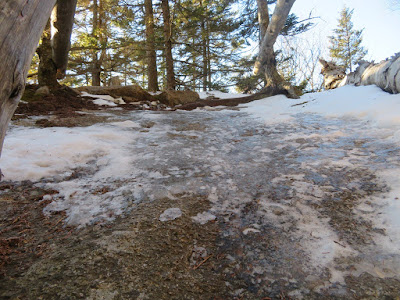 From trail's end, I bushwhacked up a steep spruce slope to visit another huge rock, higher up on this spur ridge of East Osceola. 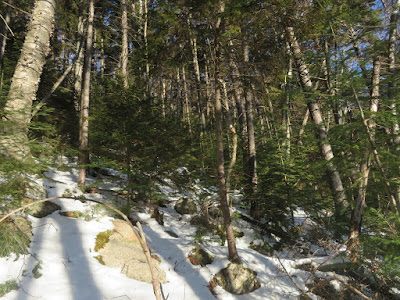 One side of this rock forms an impressive wall. 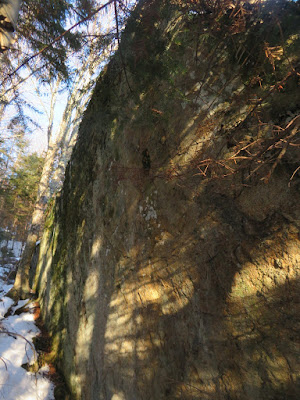 As in a previous visit, I was unable to find a way up onto the top of the rock, where there might be a bit of a view across the valley. With a short ladder or a three or four foot snowpack, access would be possible from the back side. 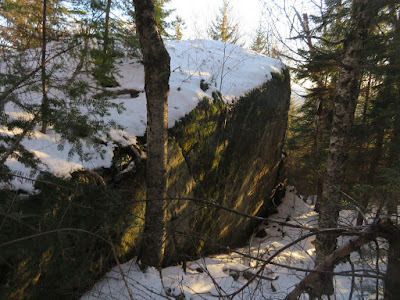 I made a bushwhack loop back down to the trail through an extensive hardwood forest with some interesting old trees. 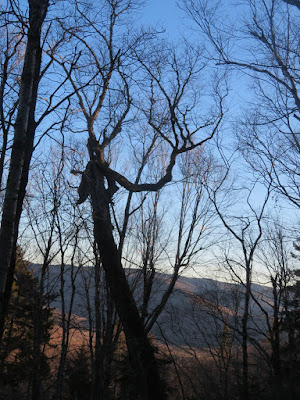 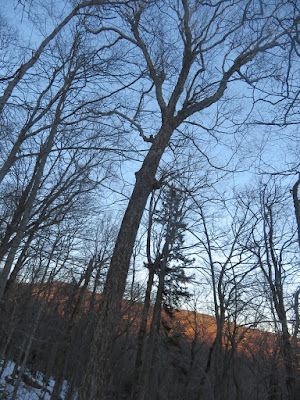 There were frequent glimpses of Tripyramid through the trees. 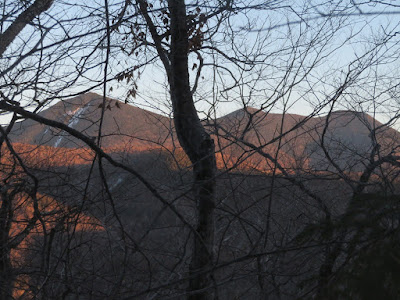 "Bear nests," in which tree-climbing black bears feed on beech nuts, were much in evidence. 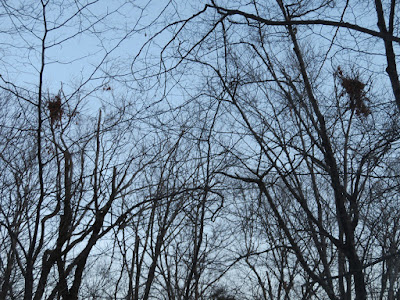 As I came back to the trail down below, I saw the Corridor Boulders from a different angle. 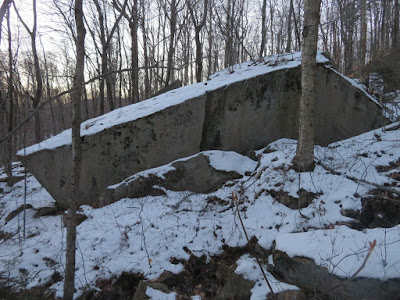 A near-dusk peek at North Tripyramid and the North Slide. 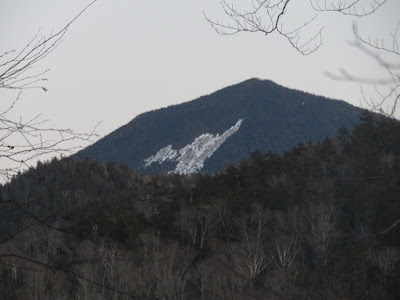