This mountain does not get a lot of love. But taken on its own, ascended from Mad River Notch, it's quite an interesting peak with its cliffs, slides, views and challenging trail.

Partway up the long, steep climb to the ridgecrest, the Mount Osceola Trail passes close by this huge rock slab, one of the few open spots on the upper part of a long slide that came crashing down off East Osceola in 1892. 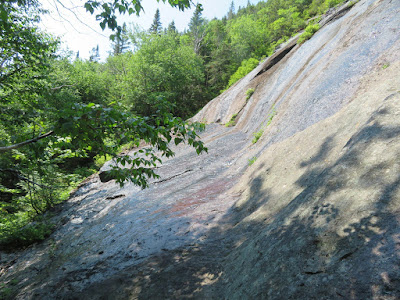 Looking up from the base. A short path leads out to here, but the slab itself is dangerous to climb. 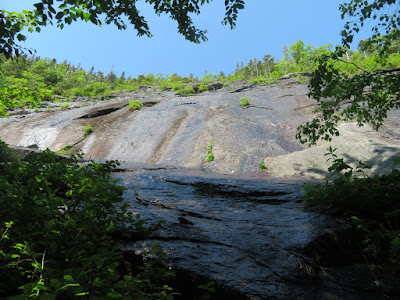 One of the roughest sections of the Mount Osceola Trail on the climb to East Osceola is where it ascends alongside the slab. 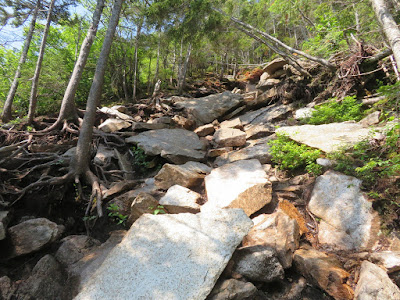 About 400 ft. higher, the trail scrambles up the topmost ledges of the 1892 slide. Excellent views here. 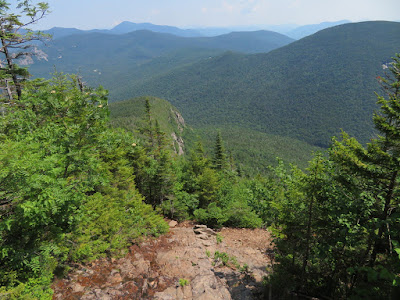 Looking down on the impressive cliffs of East Osceola's NE spur. 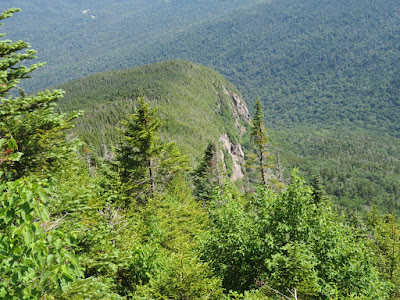 At the top of the steep climb, after emerging from the eroded gully sometimes called "The Chute," the trail turns left up the ridge, while a short path leads right to a superb west-facing viewpoint. Here the main summit of Osceola is seen close at hand. 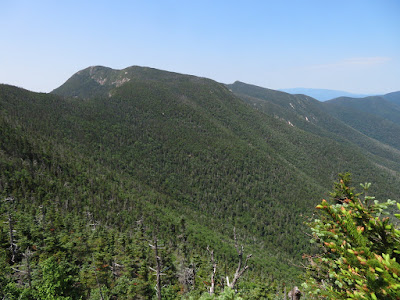 With binoculars, I could see that the main summit ledge looked pretty busy on this hot, sunny and humid Thursday. 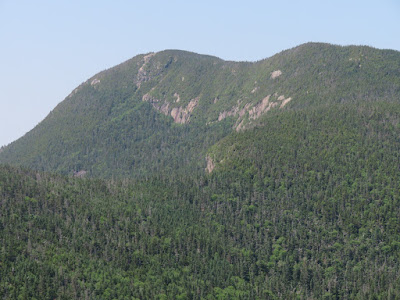 Osecola's West Peak behind a profile of the Split Cliff. 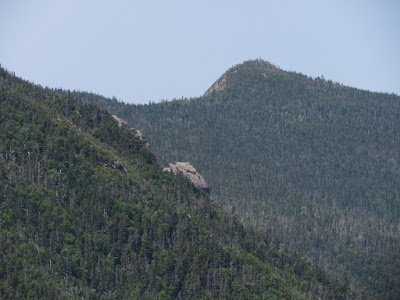 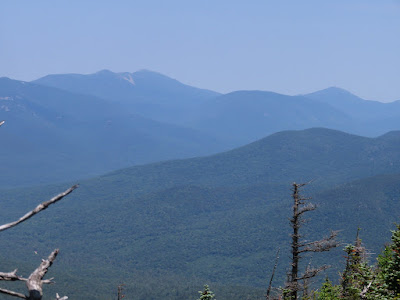 My favorite vista here is the many spurs of Mt. Osceola and Scar Ridge sweeping down into the Hancock Branch valley. 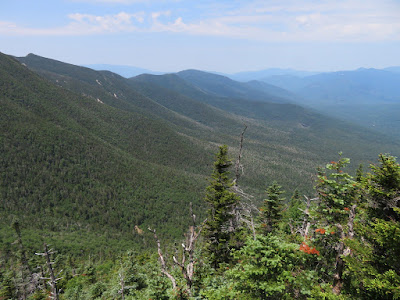 Above the viewpoint, the trail briefly eases through fine boreal forest before the final fairly steep pitch to the East Osceola summit. 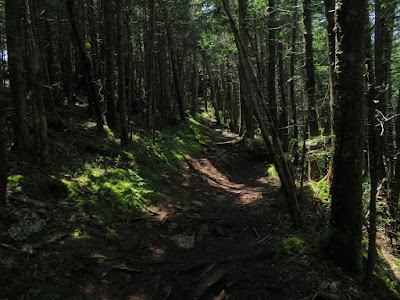 A cairn and lots of blowdown on the viewless high point. 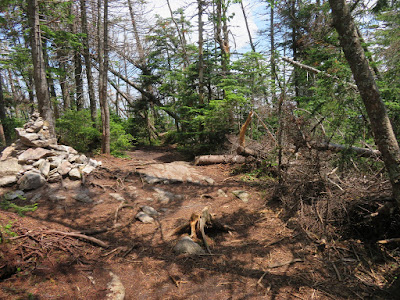 A short distance north of the high point, a path leads to a decent eastern view from a fir wave opening. This will likely be gone in a few years. 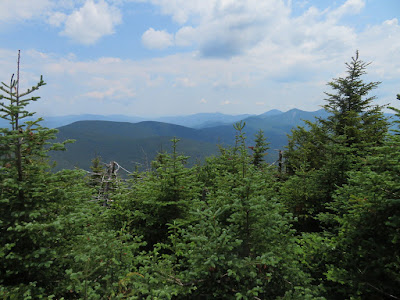 Mt. Passaconaway peers over behind the Tripyramids. 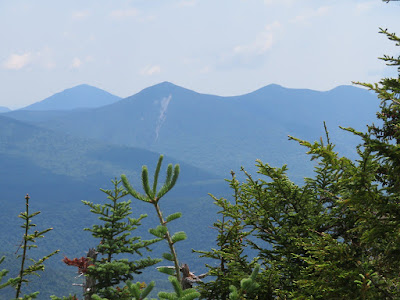 Dropping into "The Chute" at the top of the steep descent. The 1940 edition of the AMC White Mountain Guide has a laconic description of this section of what was then known as the Osceola-Greeley Ponds Trail. From East Peak "it turns NE down a narrow ridge and soon drops abruptly to the top of a slide, the N side of which it follows (very steeply) to the Greeley Ponds Trail near the S end of the upper pond." The lower part of this steep section was relocated to its current route in the mid-1980s. 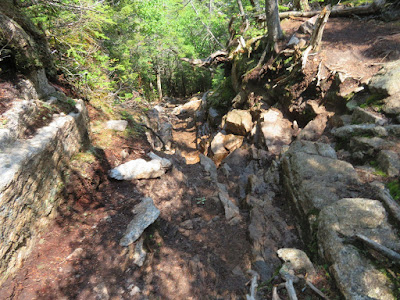 Upper Greeley Pond and Mt. Kancamagus from the slide patch crossed by the trail. 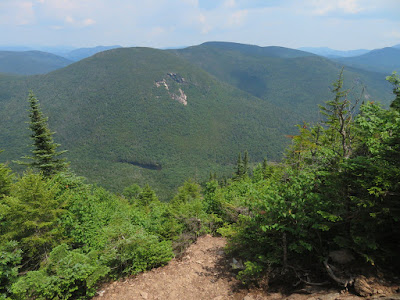 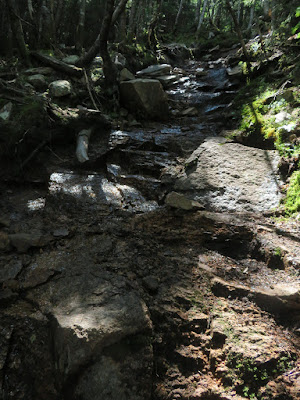 The K2 Cliff and slide on the west face of Mt. Kancamagus. In the early 1900s Waterville Valley hikers cut a short-lived trail up there from the south. 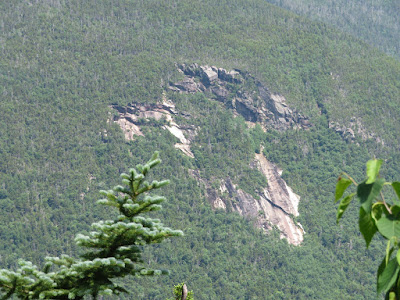 This old leaning yellow birch marks the bottom of the steep descent. 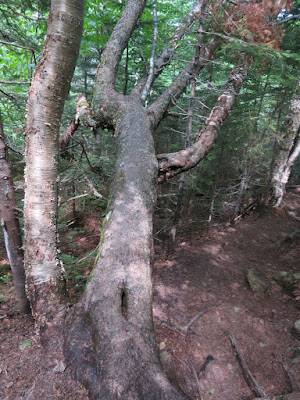 Before heading out, I made a steep bushwhack diversion down to an open patch on the 1892 slide that I had often seen from Upper Greeley Pond, but had never visited. It can be seen left center in this photo. The wide snowy patch higher up is the rock slab the Mount Osceola Trail climbs beside. 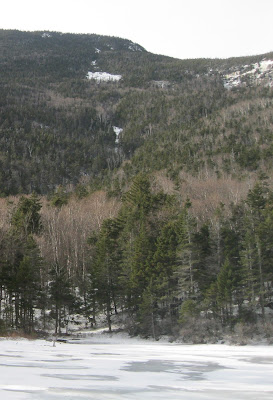 After pushing through some dense conifers, I found the open patch. 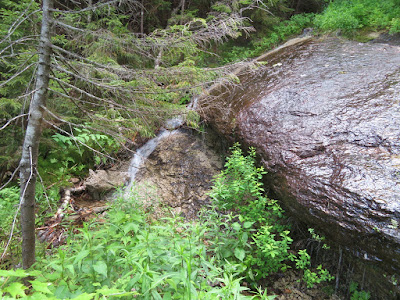 Looking down to Upper Greeley Pond. 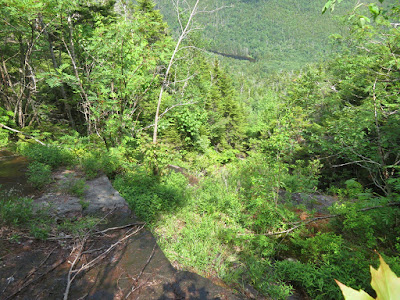 Zoom on the pond. 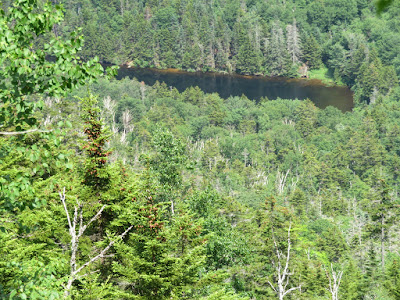 Annual growth has reclaimed much of this patch, but some open rock remains. I tried to imagine what this slide was like, freshly fallen in 1893, when William Morse Cole made a harrowing ascent and spent the night on the summit of Mt. Osceola. His account of the trip, “Alone on Osceola,” was published in New England Monthly magazine in 1895. Cole was a longtime professor of Economics at Harvard University, and a prolific author in the field of accounting. Osceola was a favorite mountain, and the new slide presented an enticing challenge for Cole: “…The fact that human foot had never trod those newly bared ledges served as an invitation.”
One October day he hiked in to Upper Greeley Pond and scouted his route from a log raft out on the water, noting “the white line of the slide.” He started up the track of the slide, clambering over torn and twisted trees and then loose debris and disintegrated rock. On the slide proper he found “bed rock nearly as smooth and washed as clean as a marble floor.” Higher up the going became quite treacherous. Cole had several narrow escapes from starting his own new slide. He tried taking to the edge of the slide, but eventually was obliged to make his way up the stream channel in the center. The very steep and smooth upper ledges were especially challenging: “Now and then I came to a pitch so sharp and smooth that I could not cling, even though I lay flat and pressed hard with both feet and hands.” Inspired by the expanding mountain views, he pushed on to the top of the slide and continued in rough terrain to the East Peak, and then along the ridgecrest to the ledgy summit of Osceola, where he spent a moonlit night before descending by trail the next morning to Waterville Valley. 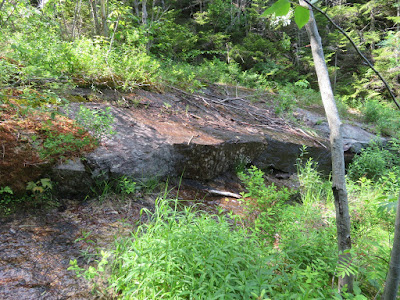 Interesting boulder caves beside the Mount Osceola Trail, a short distance below the bottom of the steep section. 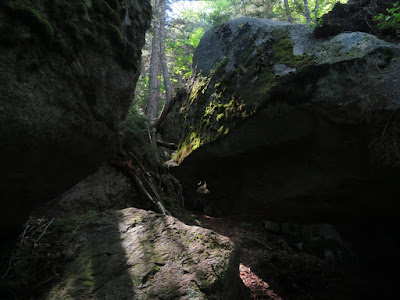 A peek at the cliffs of the NE spur. 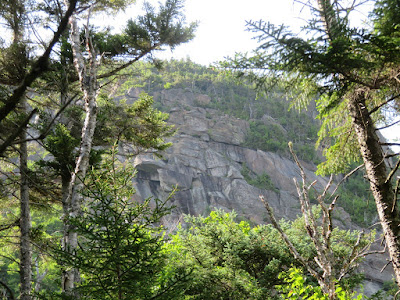