First sun on Upper Greeley Pond, after rising above the ridge of Mt. Kancamagus. 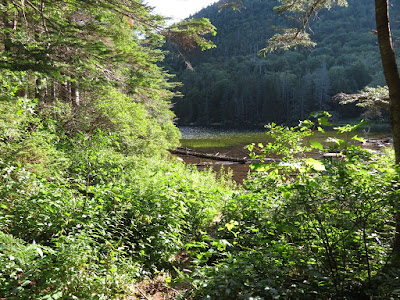 After a year or two of flooding, the little gravel beach at the NW corner of Lower Greeley Pond is back. 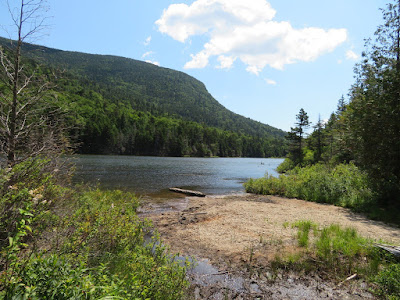 Mad River Notch from the beach. 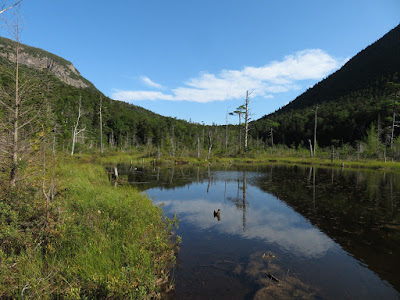 In the 1904 edition of his Waterville Valley guidebook, Arthur L. Goodrich wrote "The New Slide fell in 1897 and half filled the lower Greeley Pond." Minutes from a WVAIA meeting in 1897 noted that trail work was neded on the Greeley Pond path due to the slide.The remains of the slide runout are seen at the bottom of the photo. Goodrich called it the New Slide to distinguish it from the older slide farther north on East Osceola, which fell in 1892 - the slide crossed by the Mt. Osceola Trail near the top of the steep climb to East Osceola. 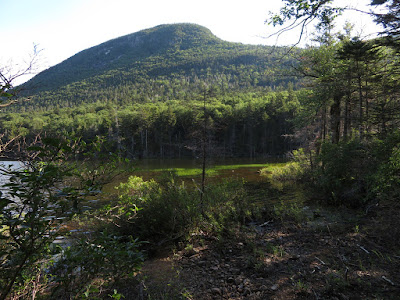 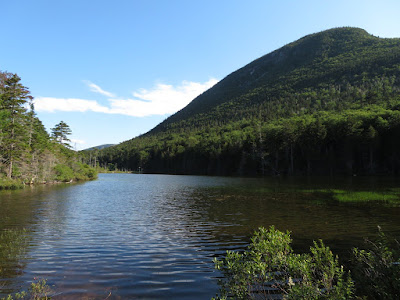 I followed the rubbly old slide track up from the trail. 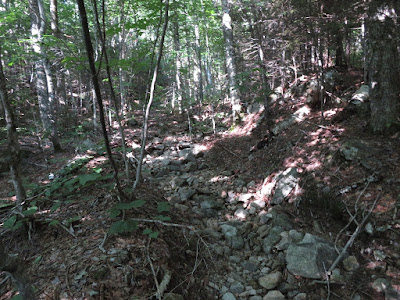 The first slab was slick and I opted for a detour through the woods. 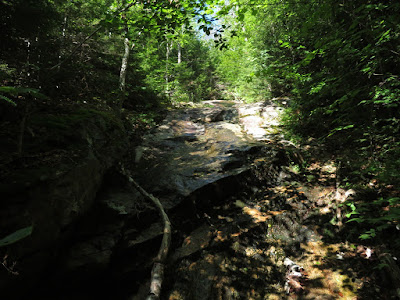 Same for the second ledge. 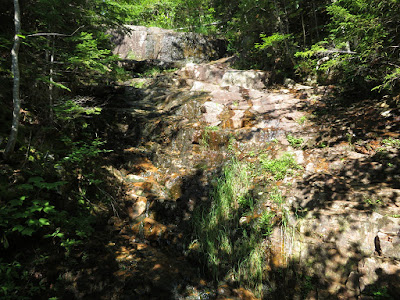 And the third, at the base of a huge steep, open slab. 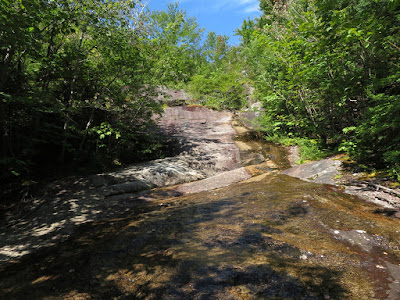 After a very steep and thick whack, I emerged on a shelf at the top of the big slab. I've visited this secluded spot several times before in summer and winter. The memory of the dense whacking always seems to fade. I had hoped to find a water bottle that was plucked from my pack back in 2010, but no luck. 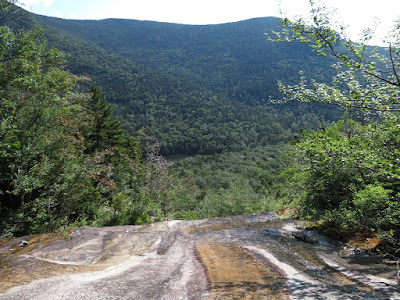 Looking down at Lower Greeley Pond. 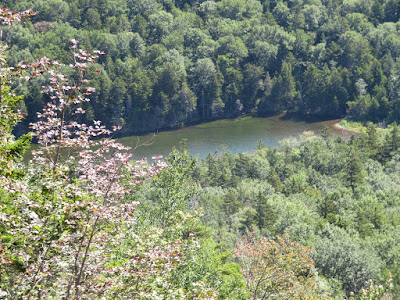 From the edge, a view across to the Tripyramids. 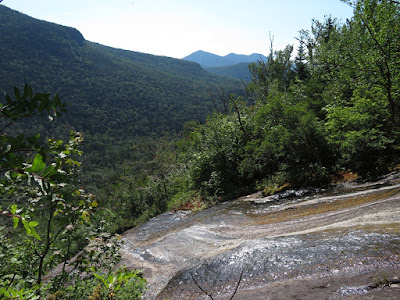 A nice perch for lounging in the morning sun. 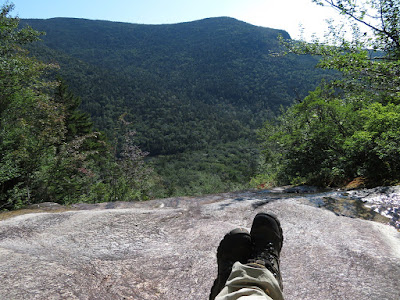 Heading farther up the slide track. 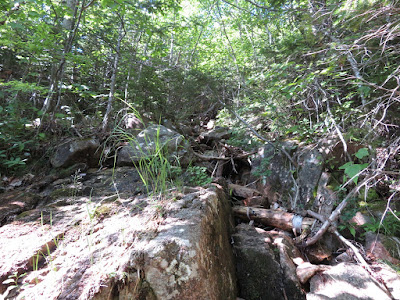 Did a short bypass around this spot. 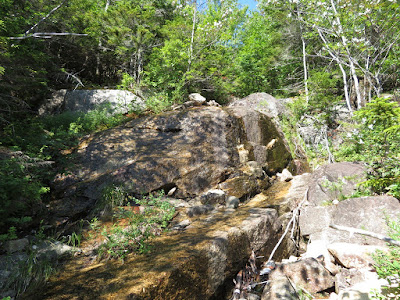 A bit higher was a section of nice dry, low angle slabs. 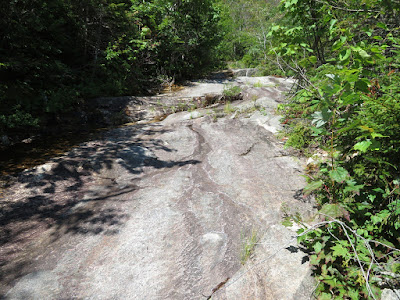 This was a smooth snowy swath on an early April snowshoe visit. 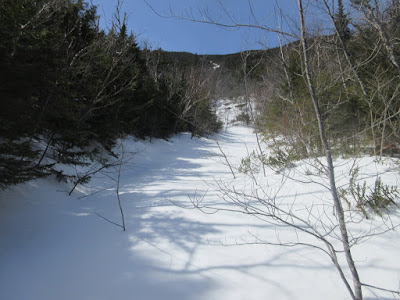 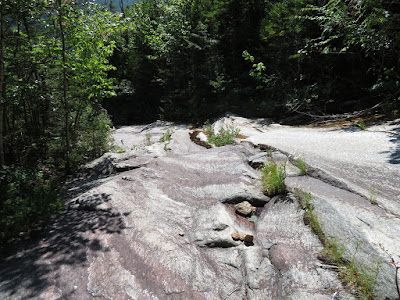 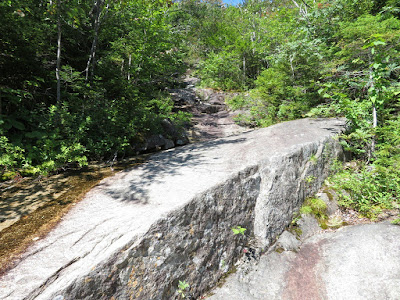 A headwall terminates the open lower part of the slide. The wet sections of ledge are as slippery as ice. 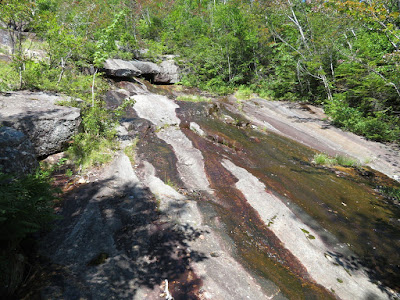 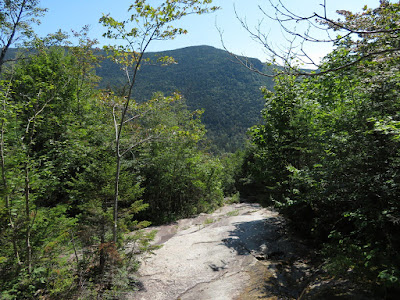 Tufts on the slide. 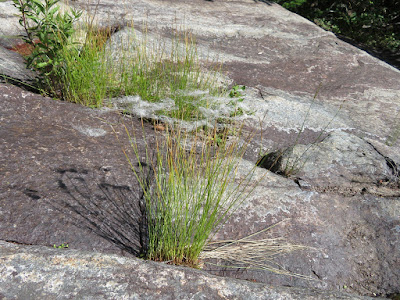 Better lighting back down on the big slab. 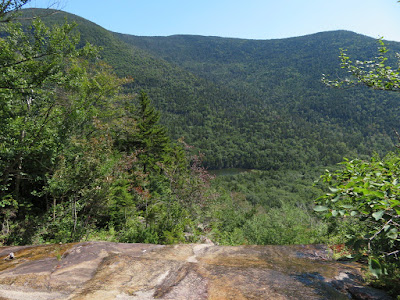 The K1 Cliff on Mt. Kancamagus. 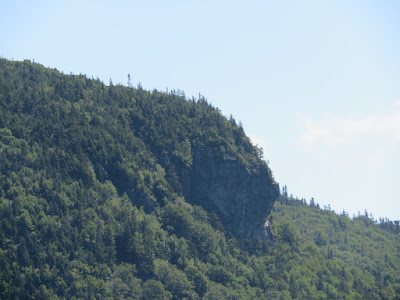 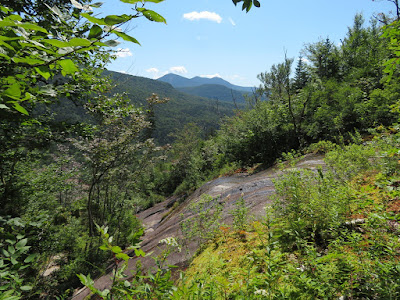 The old Waterville guidebook noted that the New Slide could be used for descent from East Osceola to Greeley Ponds. Yikes! Those hikers must have been made of sterner stuff. 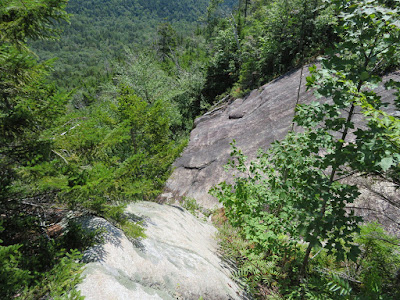 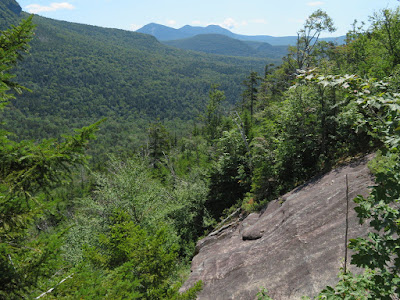 Upper Greeley Pond on the hike out. 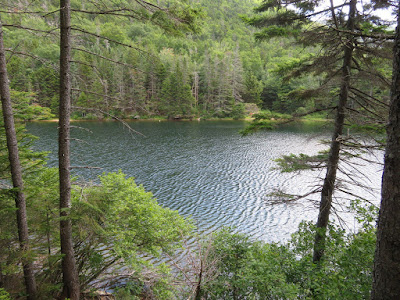 The 1897 slide is visible as a thin strip in this view from a talus slope on Mt. Kancamagus. The arrow shows the headwall slab where I turned around. The open upper part of the slide is 700-800 ft. higher in elevation. 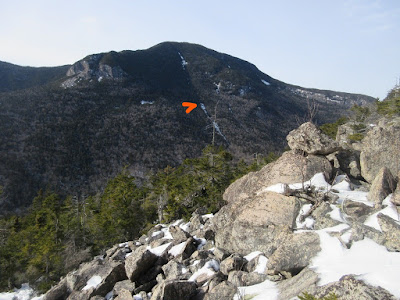