One of the blessings of living in the mountains is the chance to get out for short rewarding hikes before or after work. In the past week I've enjoyed three rambles in the cool of the morning, within a short drive of home.

I bushwhacked off Falling Waters Trail a little ways up Walker Brook, which drains the western slopes of Mts. Lafayette and Lincoln, then worked my way downstream past a series of nice cascades.

The highest cascade I went to. 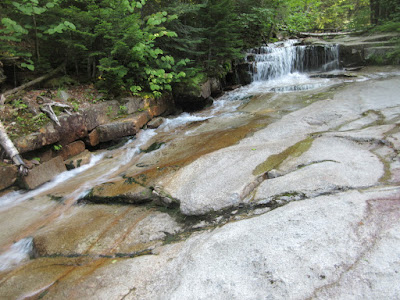 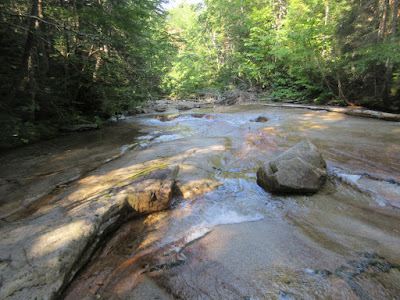 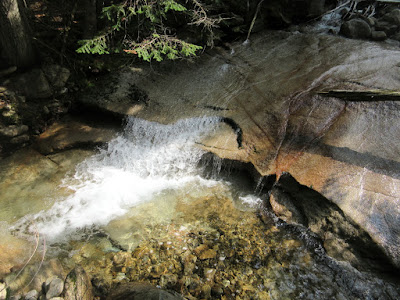 A series of shelves. 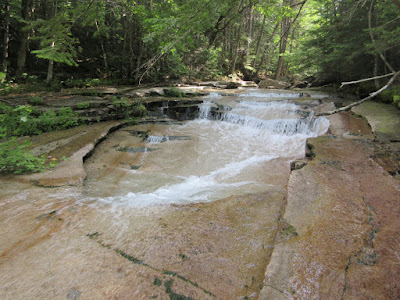 A granite boulevard through the forest. 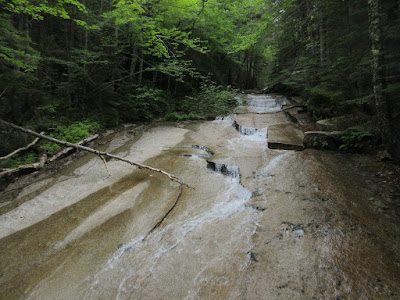 A fine cascade, should be impressive in high water. 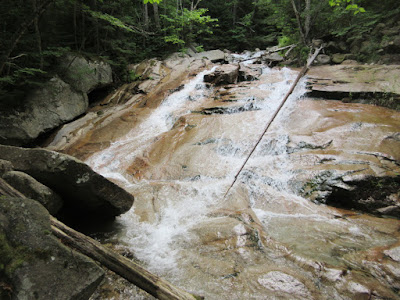 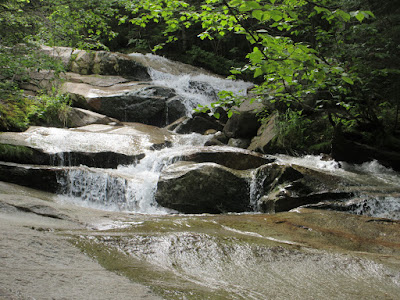 The waterfalls along the Falling Waters Trail along Dry Brook were touted in late 1800s guidebooks, but they were called Walker's Falls because what is now called Dry Brook was then known as Walker Brook. At some point the Walker name was transferred to the next brook to the north, which has its own set of cascades. In those earlier days access to the waterfalls was via logging road and rough bushwhack. Today's Falling Waters Trail was laid out in 1958 by noted trail-builder Clyde Smith, and was completed with volunteer labor.

Stairs Falls, which was once called Lower Walker's Falls. In his 1898 Guide Book to the Franconia Notch and the Pemigewasset Valley, Frank O. Carpenter described it as "a series of step-like cascades over sheets of granite." In Part 2 of Charles H. Hitchcock's Geology of New Hampshire (1877), this is presumably what was called "Walker's Staircase." 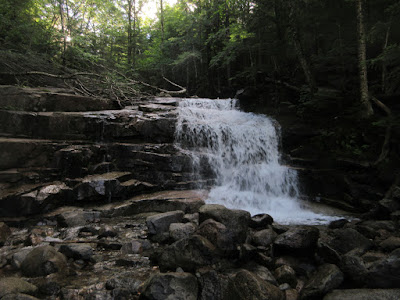 Swiftwater Falls, described by Carpenter as "a fall fifty feet high over blocks of granite." 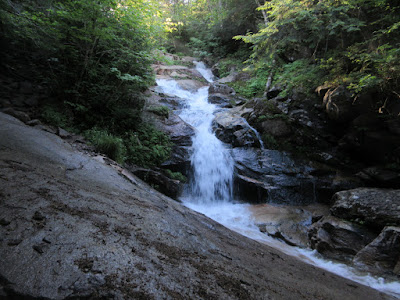 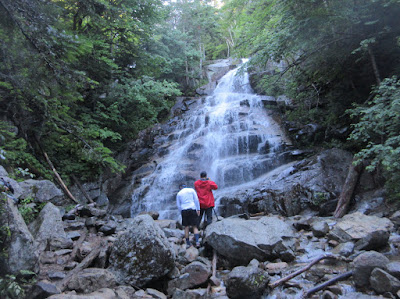 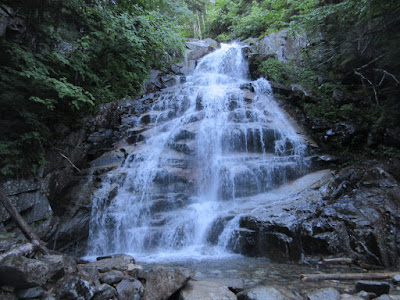 It was going to be a busy day on Franconia Ridge. Coming down from Cloudland Falls I passed at least 150 upbound hikers, maybe more. 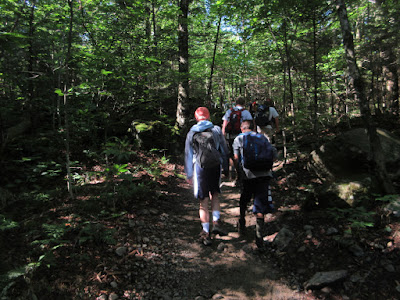 This small, shallow secluded pond resides on a high shelf in the southern shadow of Scar Ridge. One of my favorite ponds in the Whites, it has a wild aura and is far less visited than its easterly neighbor, East Pond. The 2-mile hike to the pond on the East Pond Trail and Little East Pond Trail is pleasant with mostly very good footing.

The scene was a bit on the dark side when I arrived at the south shore around 9:00 am. The water level was down, making it easy to get out to the edge for a view of the Scar Ridge peaks. 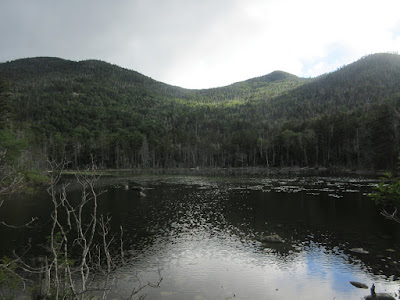 This gnarled old red maple guards the shore just to the west of the outlook spot. 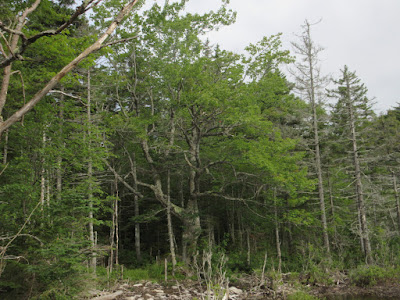 There were several clusters of what I believe is Pale St. John's Wort in bloom along the shore. 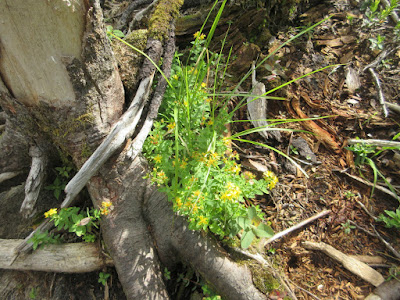 The sun burned through and brightened the pond and ridge. The main (west) summit of Scar Ridge is on the left, Middle Scar Ridge on the right. Middle Scar and its southern cliffy ledges look temptingly close from here, but reports indicate that blowdown and dense conifer scrub guarantee a miserable ascent. Mike Dickerman and I used this route back in 1987 and it was difficult then. It sounds like it's even worse now. 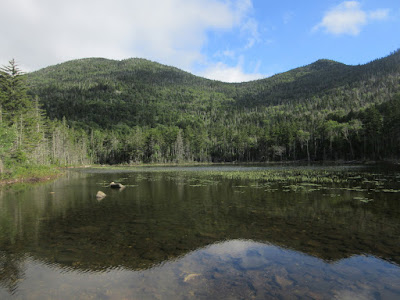 I spent a quiet 50 minutes at the pond, taking in the serenity and listening to some of the last birdsong of the summer (White-throated Sparrow, Magnolia Warbler, Winter Wren, Red-eyed Vireo, Dark-eyed Junco). To my surprise, a Belted Kingfisher landed on a snag along the north shore. I assumed this very shallow pond was essentially fishless, but the Kingfisher dove with a splash and came up with a morsel. 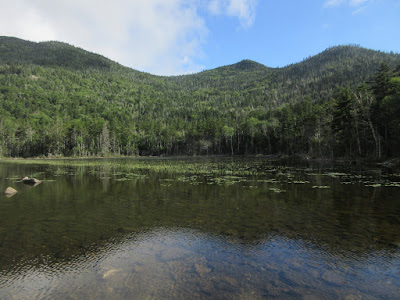 Pleasant walking on the grade of the Woodstock & Thornton Gore logging railroad, which operated from 1909 to 1914. It's a wonderful mellow hike whether you do the 4-mile round trip to Little East Pond, or the full five mile loop that also includes East Pond. 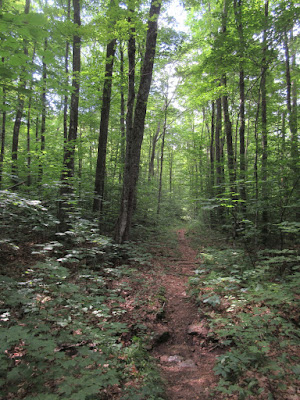