The weather forecasts were way off today. Instead of sunny skies, eager winter hikers were greeted with dreary clouds settled in above 3400 ft. I shelved plans for a higher elevation trek and decided on a visit to the open snowy slabs on the old Downes Brook Slide on the NW flank of Mt. Passaconaway, with an approach on the Downes Brook Trail. I figured with the recent cold weather the four crossings on Downes Brook would be frozen enough to navigate safely. With luck, maybe Downes Brook Trail would be broken out.

There was a great snowshoe track heading to the Mt. Potash Trail junction. Beyond here the Downes Brook Trail had only a ski track. I tried a few steps of snowshoeing along the edge of the trail and decided, nah, I'll just go up Potash on the nice broken trail instead.

The Downes Brook crossing on the Mt. Potash Trail was solidly buried. 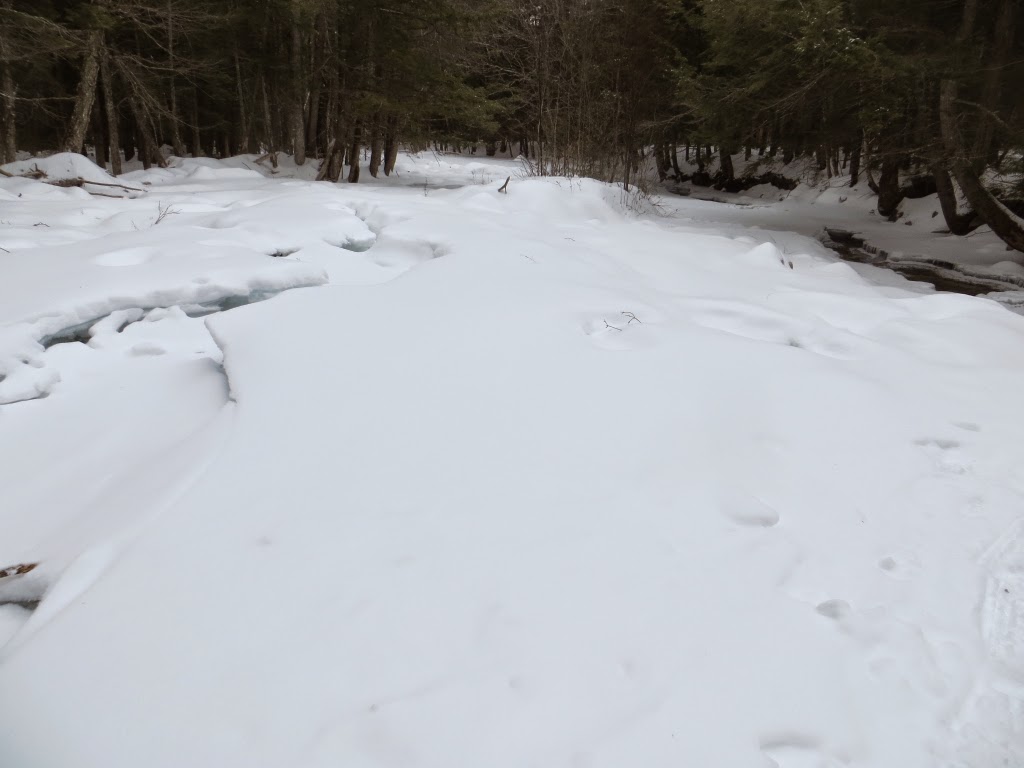 Not far beyond the crossing, the really nice snowshoe track abruptly ended. Beyond it was OK but quite choppy with boot tracks. By the time I got to the logging road crossing I'd decided I didn't want to slog up to Potash thusly and be rewarded with only limited views. So I changed plans on the fly and opted to snowshoe up this logging road to its end, then bushwhack back down to the Downes Brook Trail farther up the valley and make for the slide, my original destination. 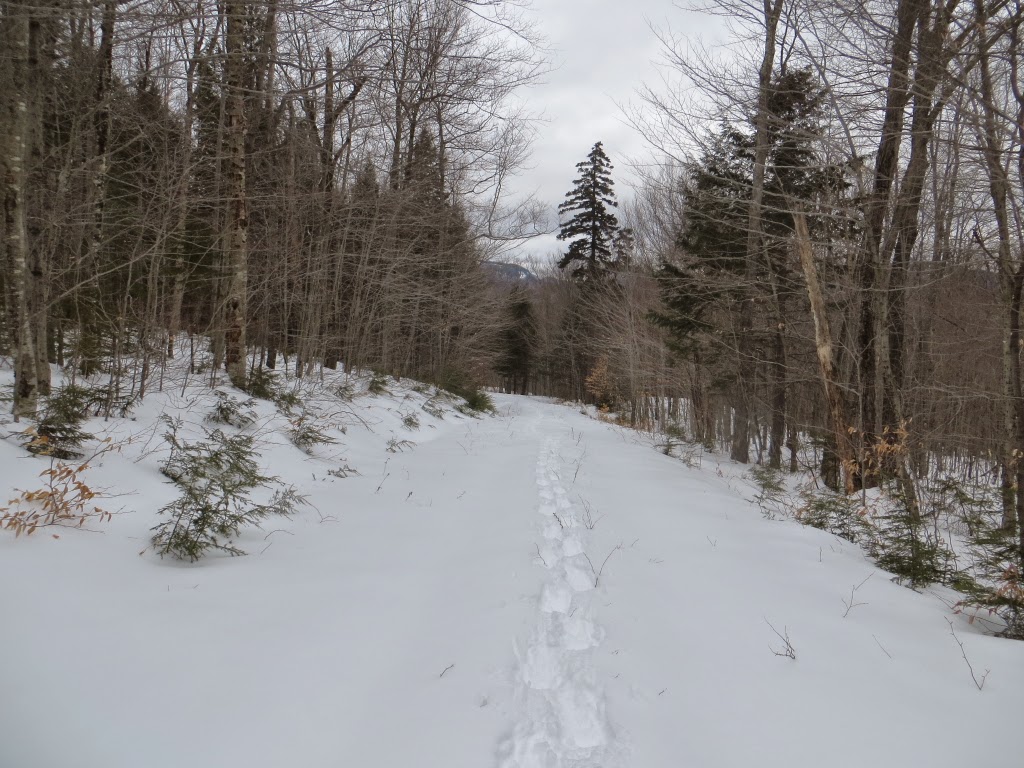 The road ended at a recent clearcut, then I continued gently down and across the slope, at times through partly grown-up old clearcuts. 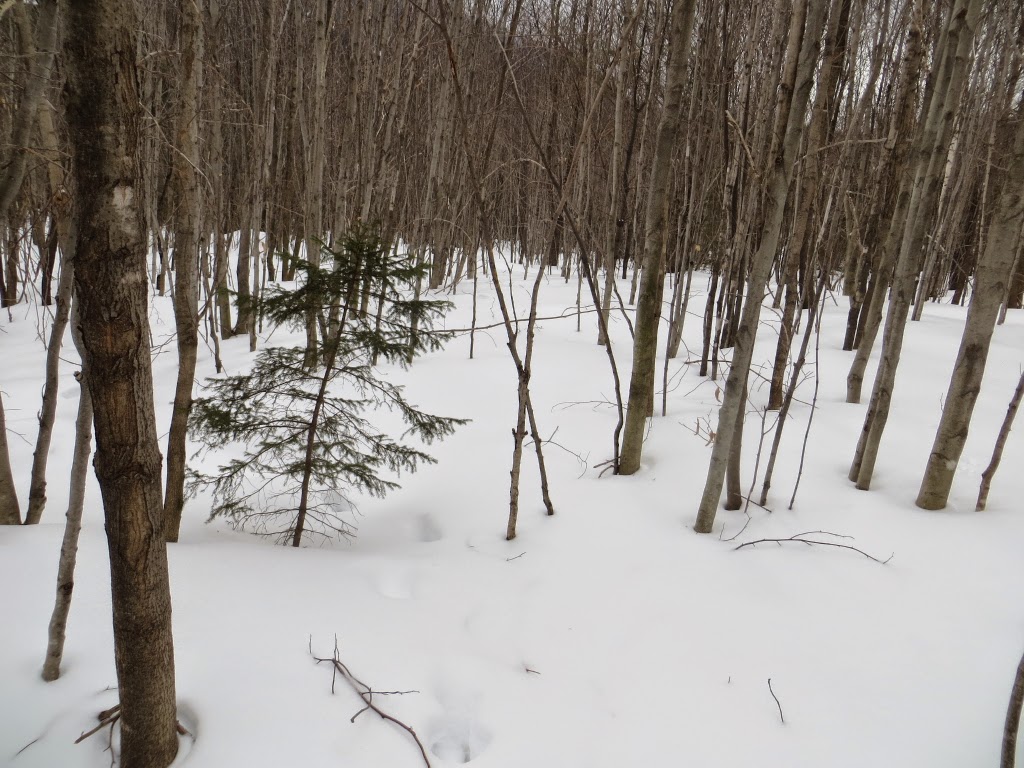 Farther along I passed these axe blazes, presumably marking the boundary of the Sandwich Range Wilderness. 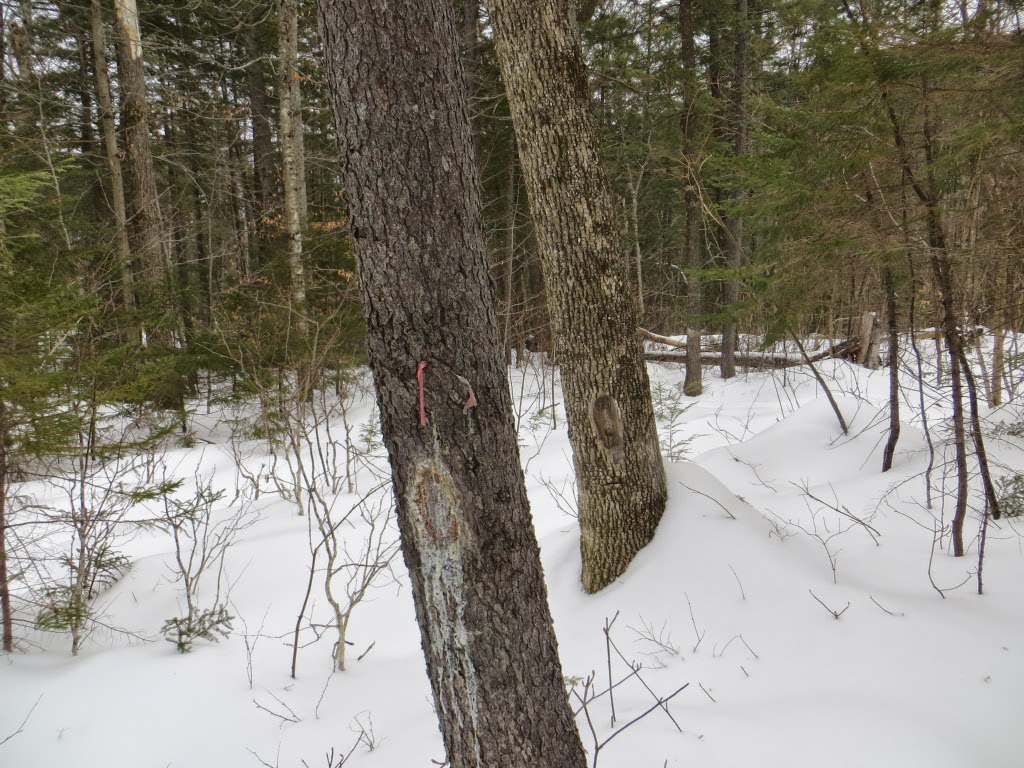 After floundering through mounded snow in small conifers, I descended a steep slope to the floor of the valley. 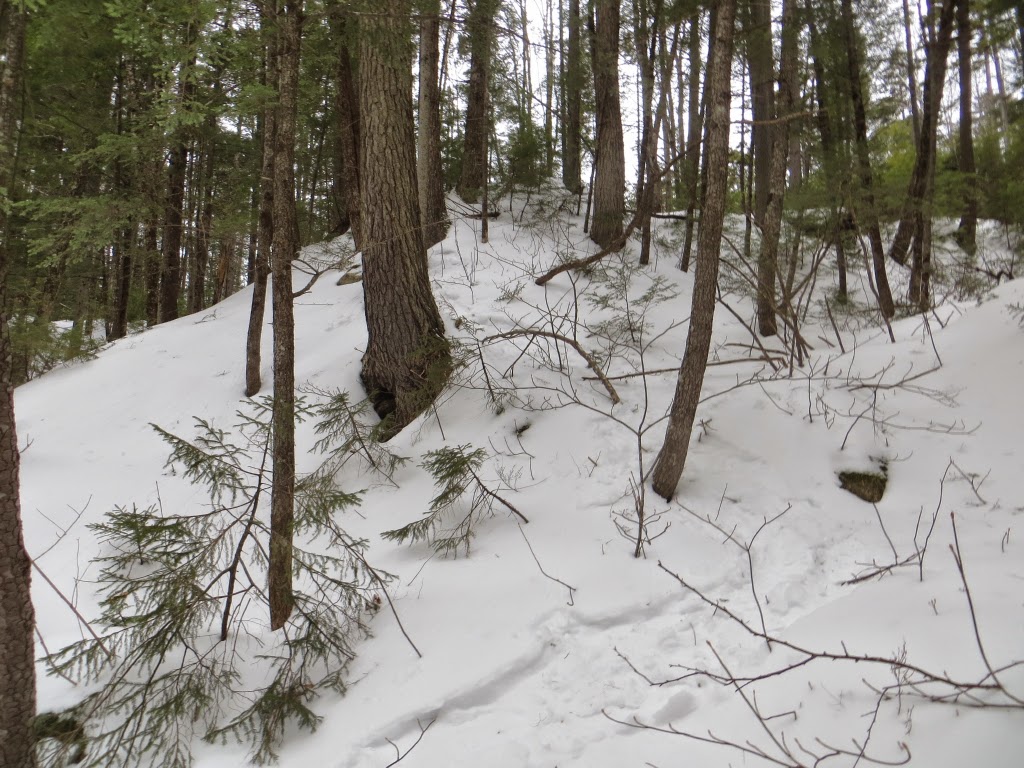 A short distance downstream I picked up the Downes Brook Trail at the fourth crossing. 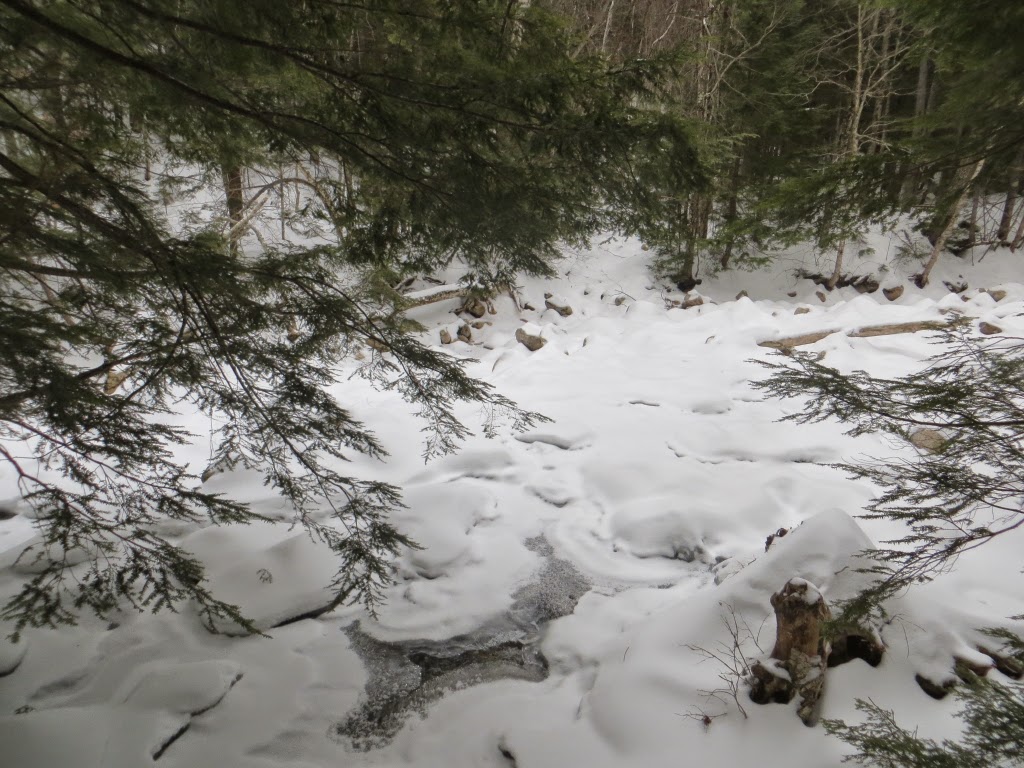 Back into the Sandwich Range Wilderness. 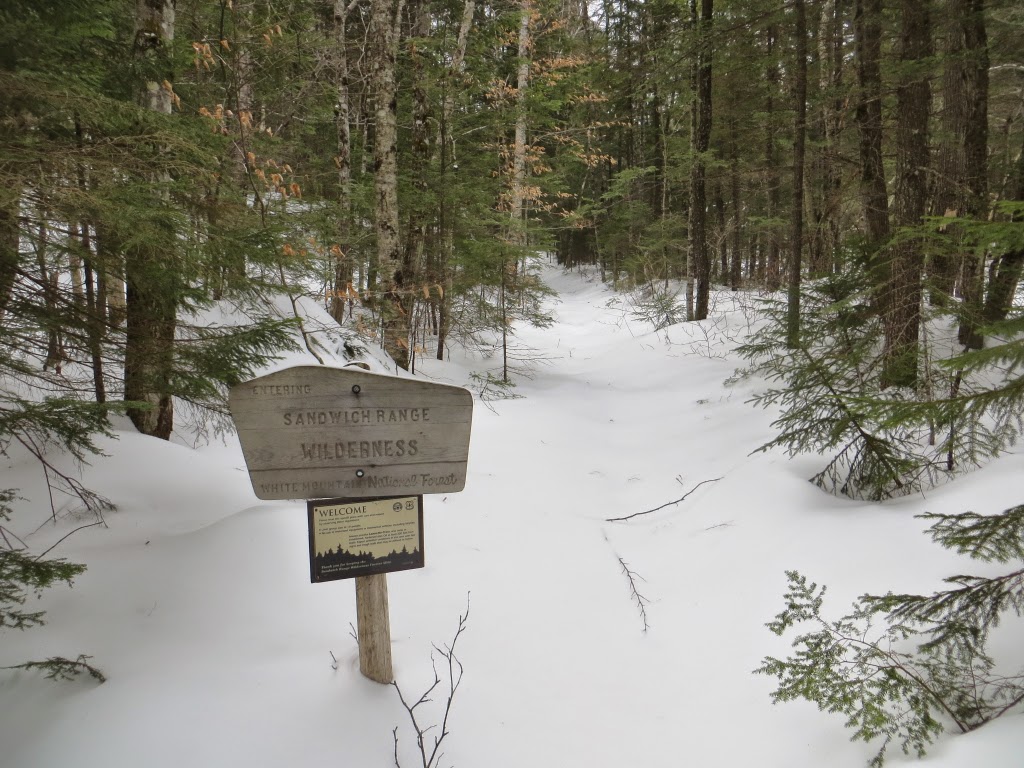 A slow, steady pace breaking through 8-10" of snow. 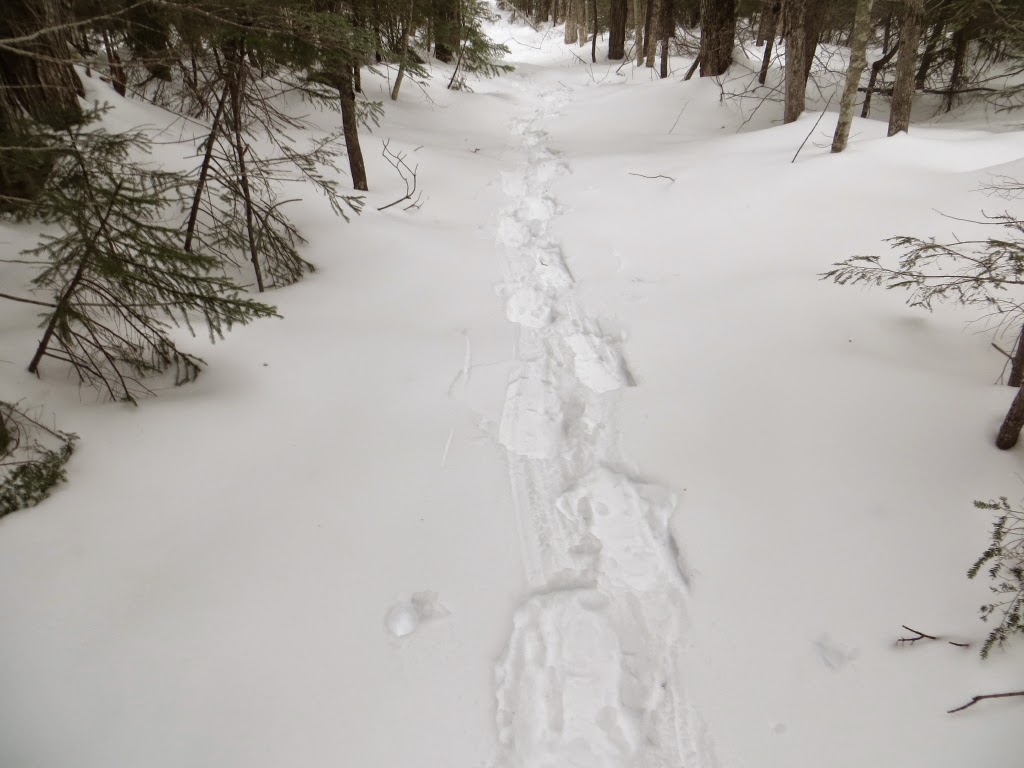 A mile after rejoining the trail I reached the outwash area that marks the foot of the Downes Brook Slide. 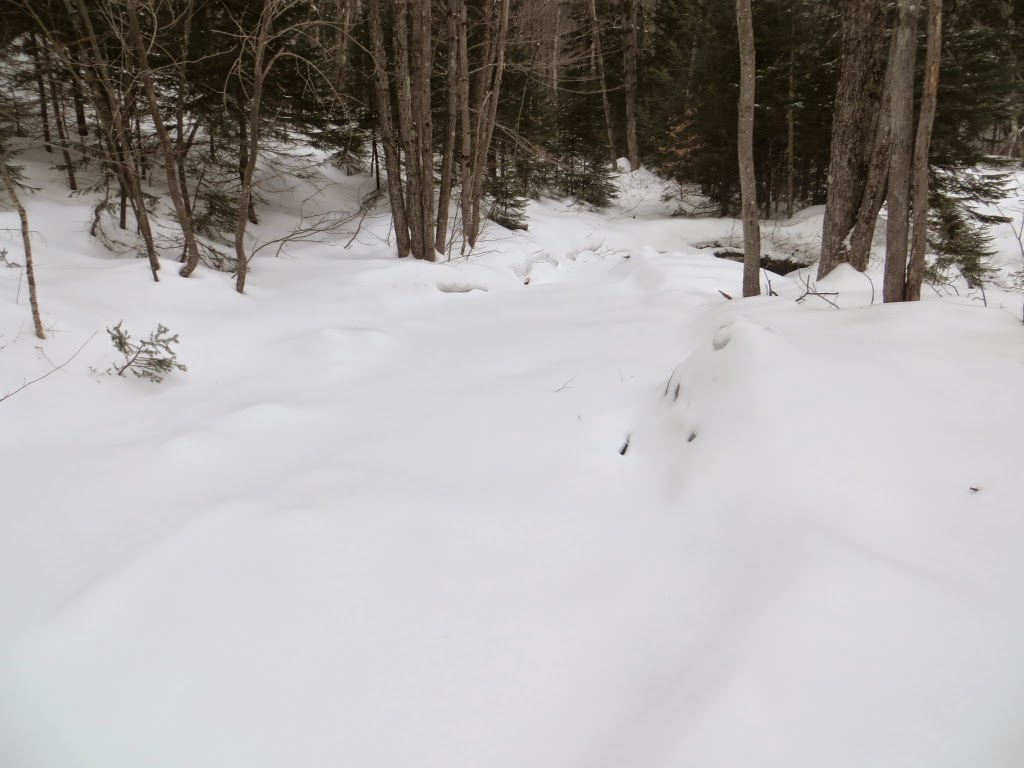 Looking up from the trail. Here I turned left off the trail and snowshoed up the mostly frozen side stream to the slabs on the slide. 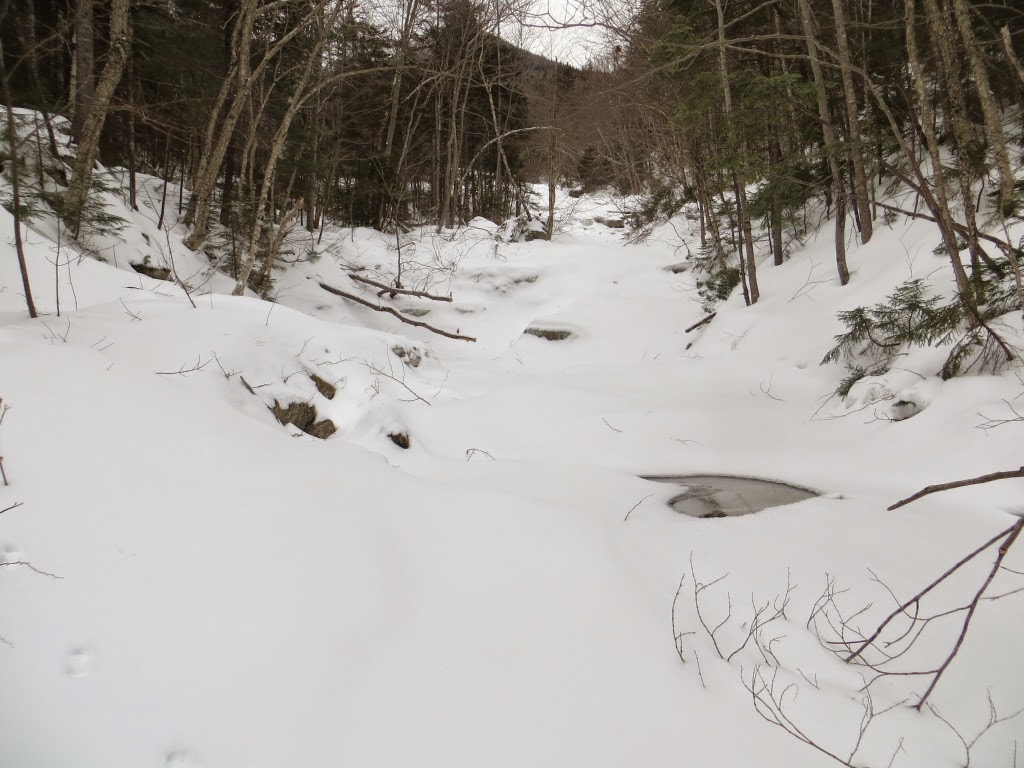 Skirting around a frozen cascade to reach the slabs. 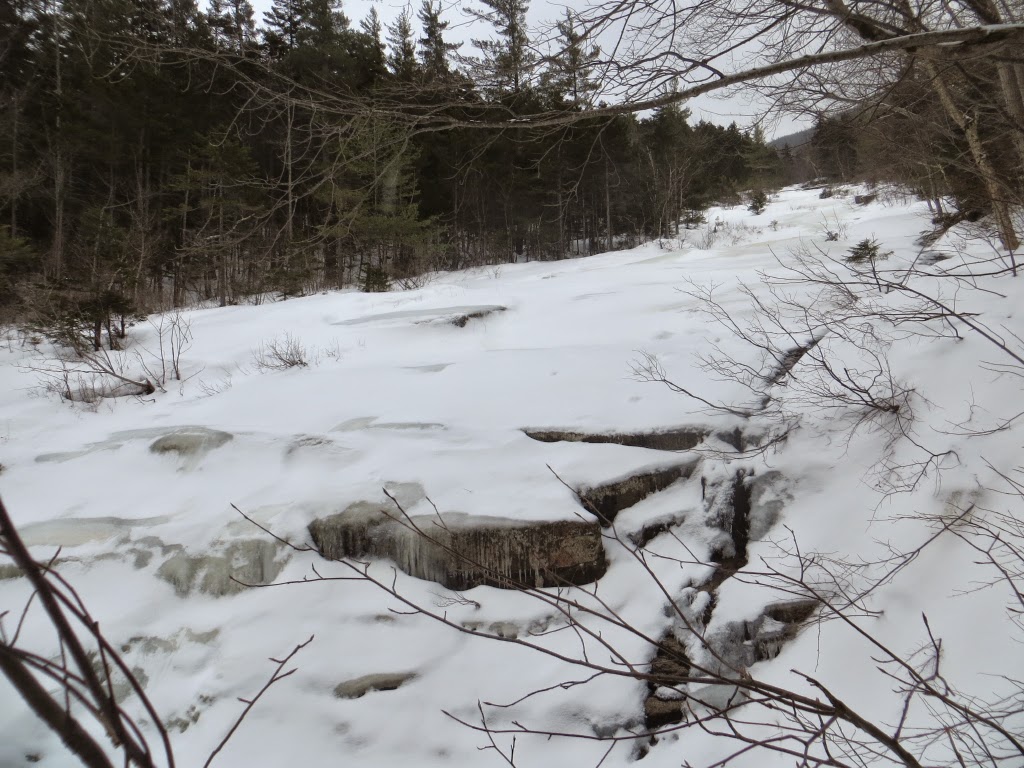 Looking down from the top of the cascade. 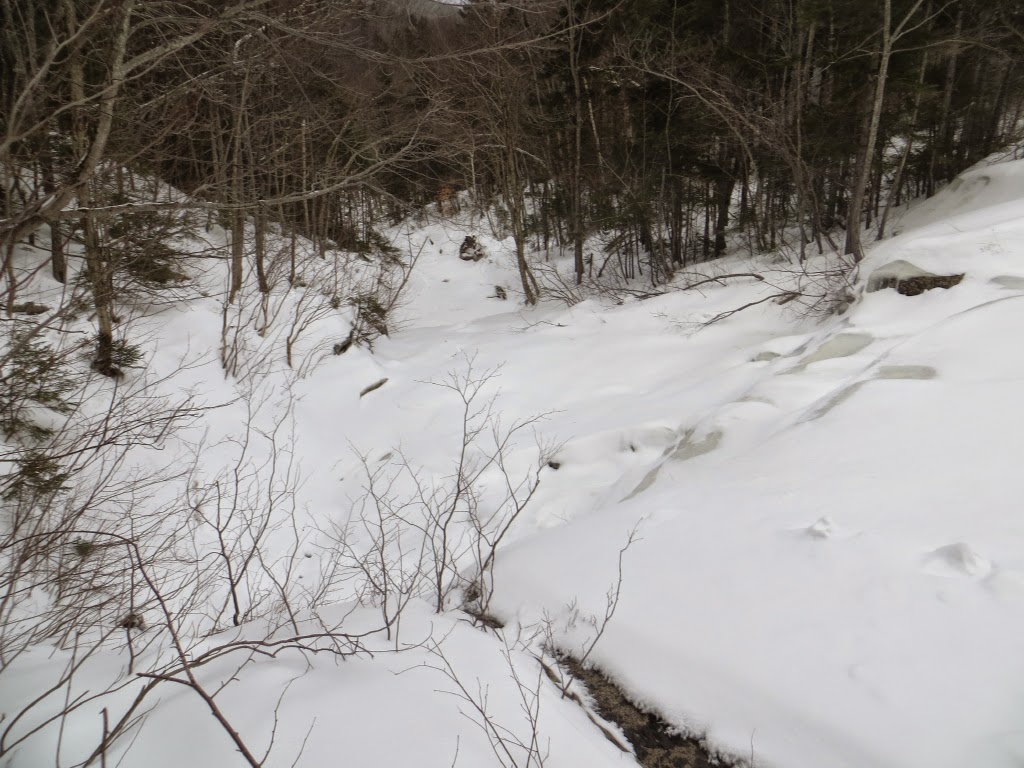 Looking up the slide. It fell in the early 1890s and for many years formed part of the route of the Downes Brook Slide Trail up Mt. Passaconaway. This trail was abandoned in 1957 because the steep upper slabs are wet and dangerous. Even these lower angle slabs can be treacherous in summer if wet. The old route gets occasional use from experienced bushwhackers, but the upper part above the slide is very steep, mossy in summer, and could not sustain heavy use. When unknown parties blazed the old route about 1990, the Forest Service and Wonalancet Out Door Club cooperatively covered over the markings to discourage casual use, and posted signs at either end noting that while foot travel was allowed, maintenance of the abandoned trail was not permitted. The only part that remains open as a maintained trail is the 0.3 mile upper stretch that leads down from the summit of Mt. Passaconaway to the spectacular north outlook. 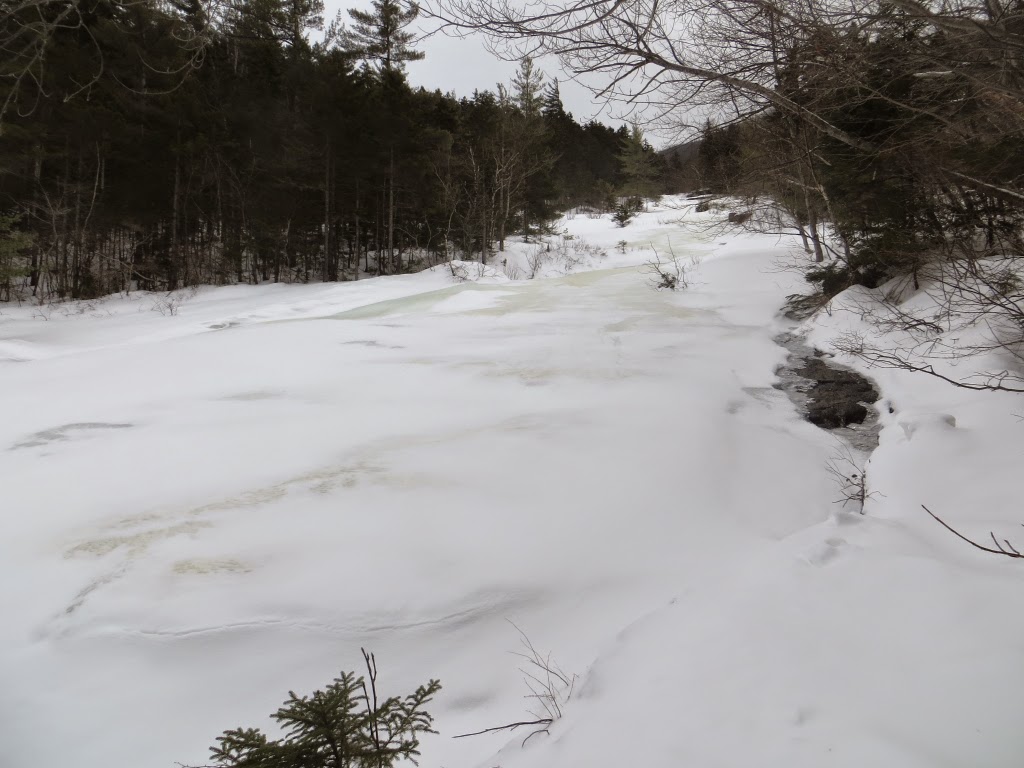 In winter these lower slabs are wonderful open fields of snow and ice. 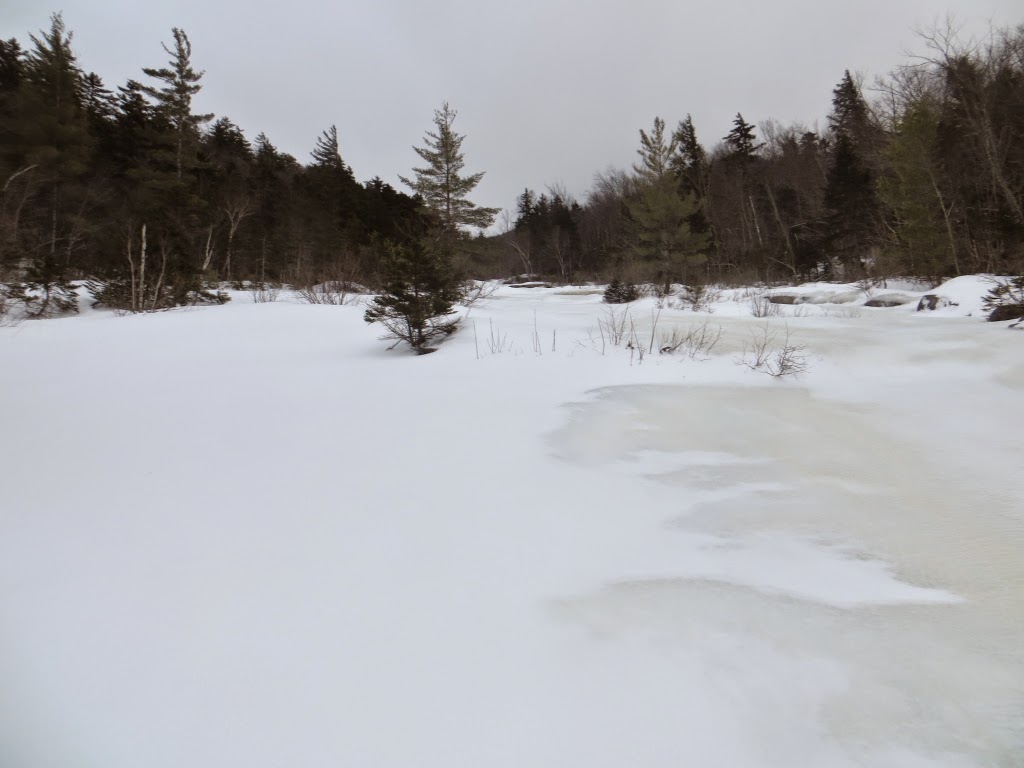 Looking back at Potash Mountain. 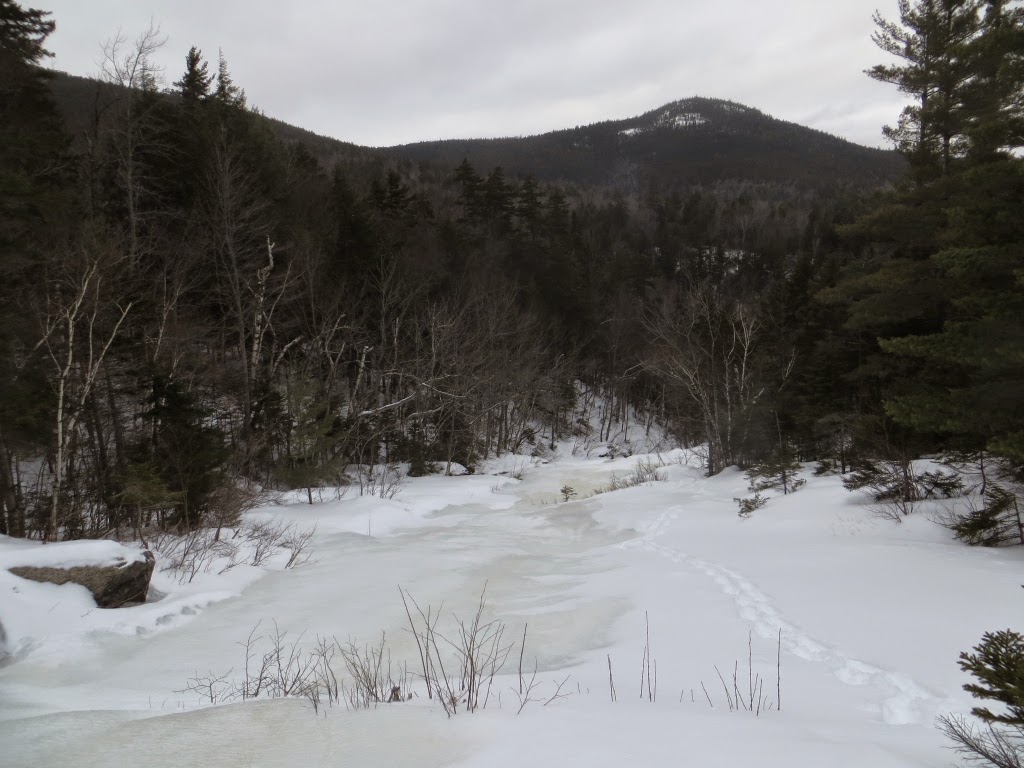 The Downes Brook Slide as seen from Potash on a nicer day. 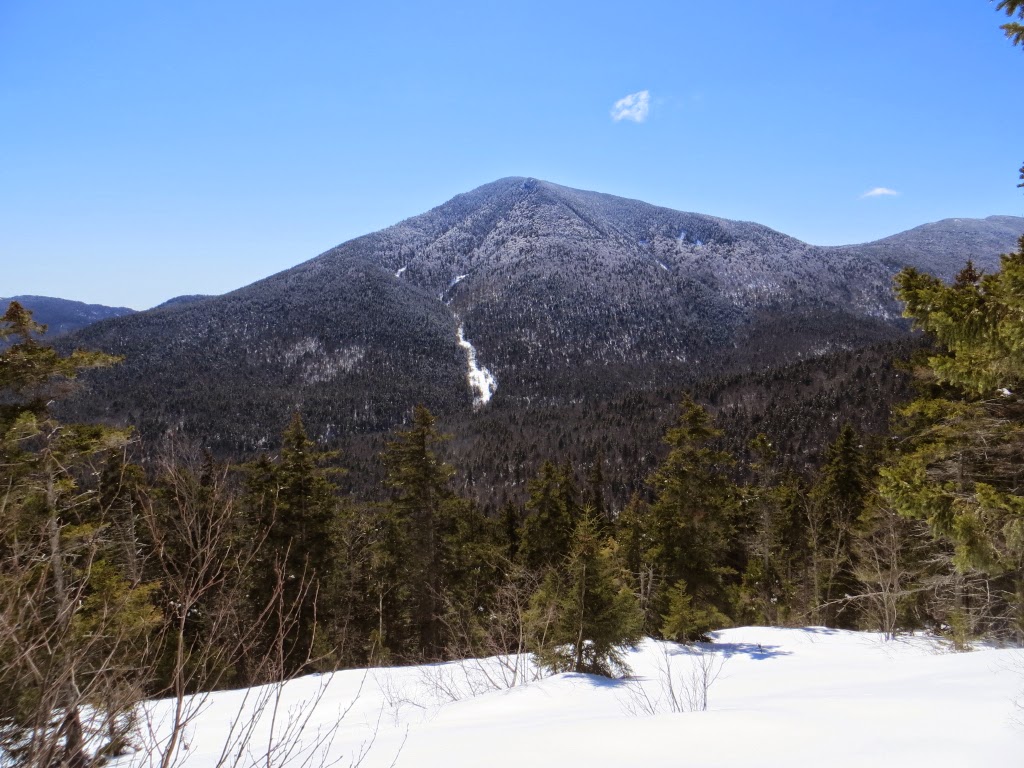 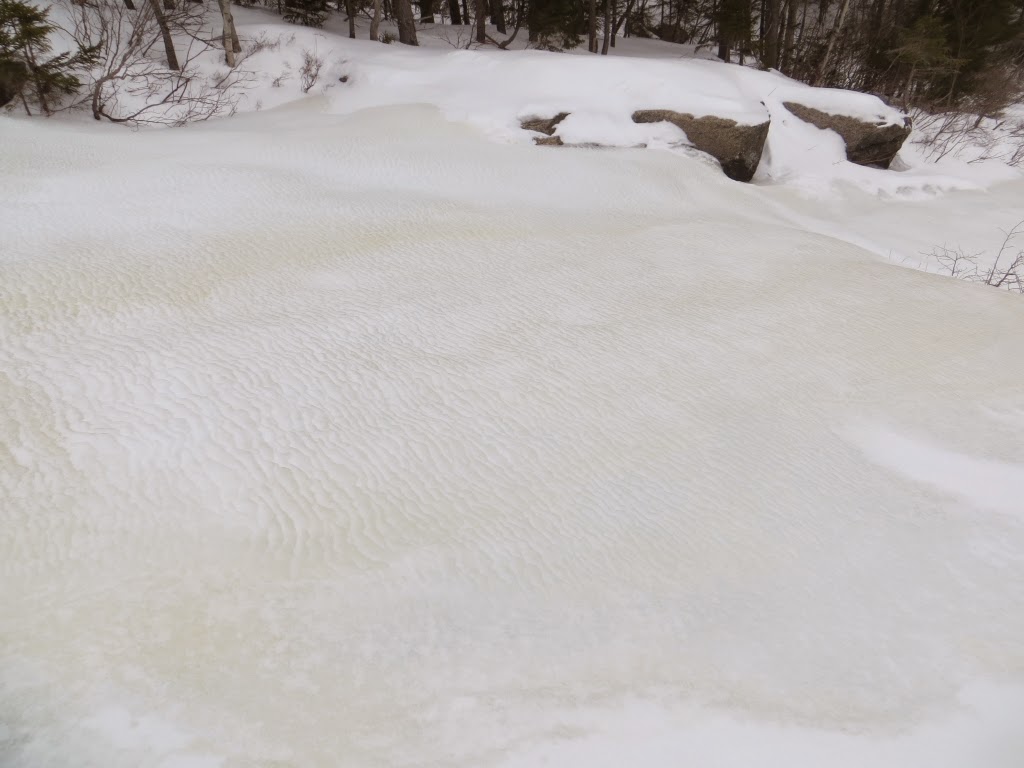 A ledge step in summer, an icefall in winter. 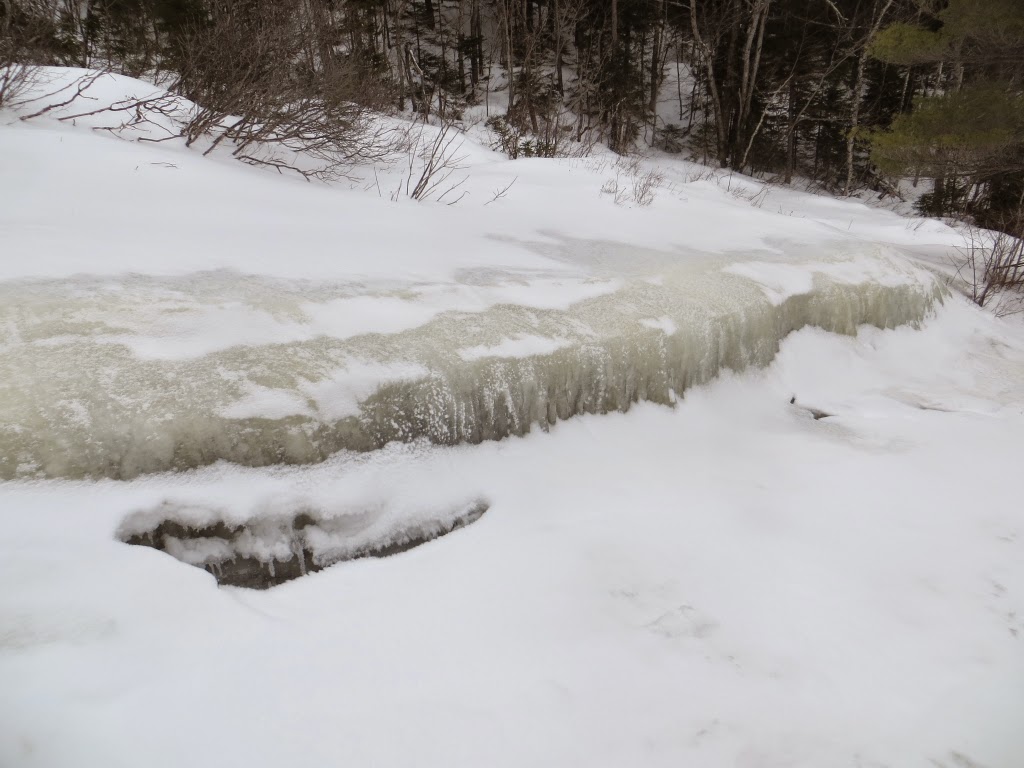 Mount Tremont in the distance, veiled by flurries. 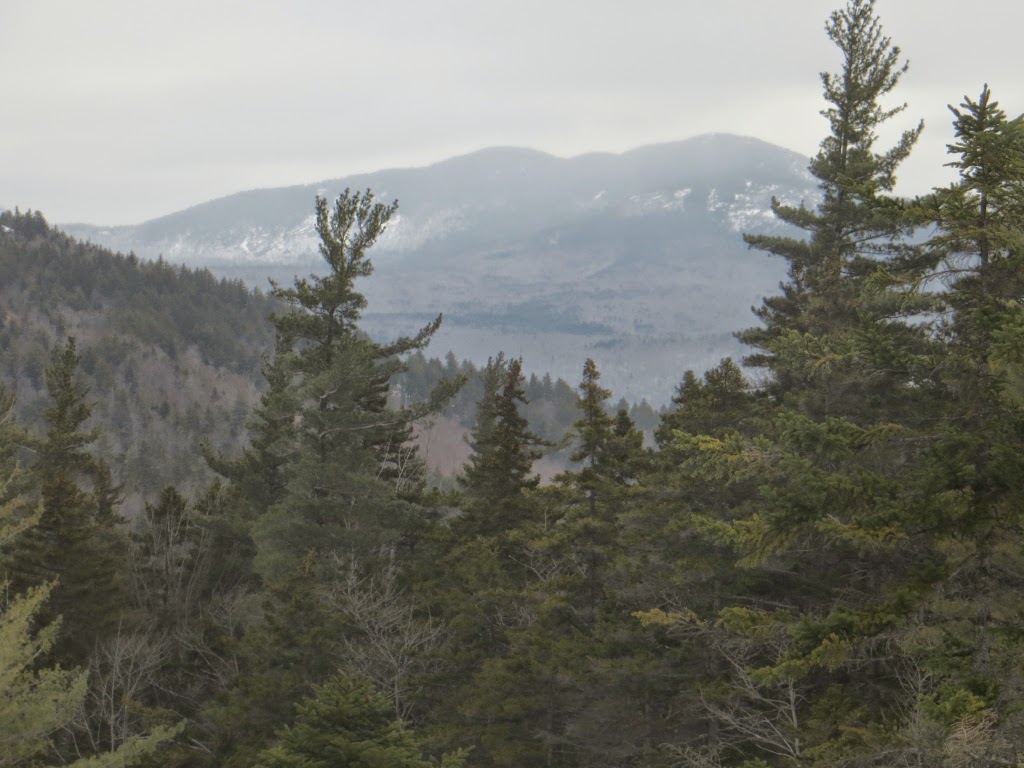 More iced-over ledge steps. Because I started late and took a roundabout route, I didn't have enough time to go higher on the slide. 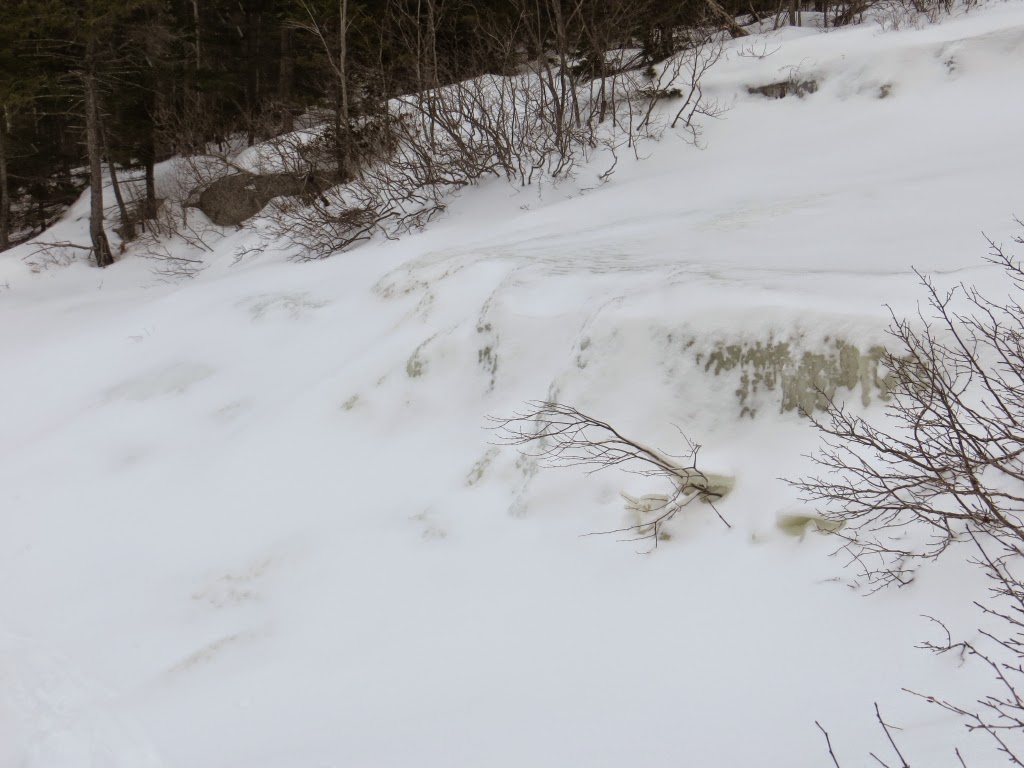 So I took a sit-down break in a 25-degree temperature that felt balmy after the recent frigid weather. 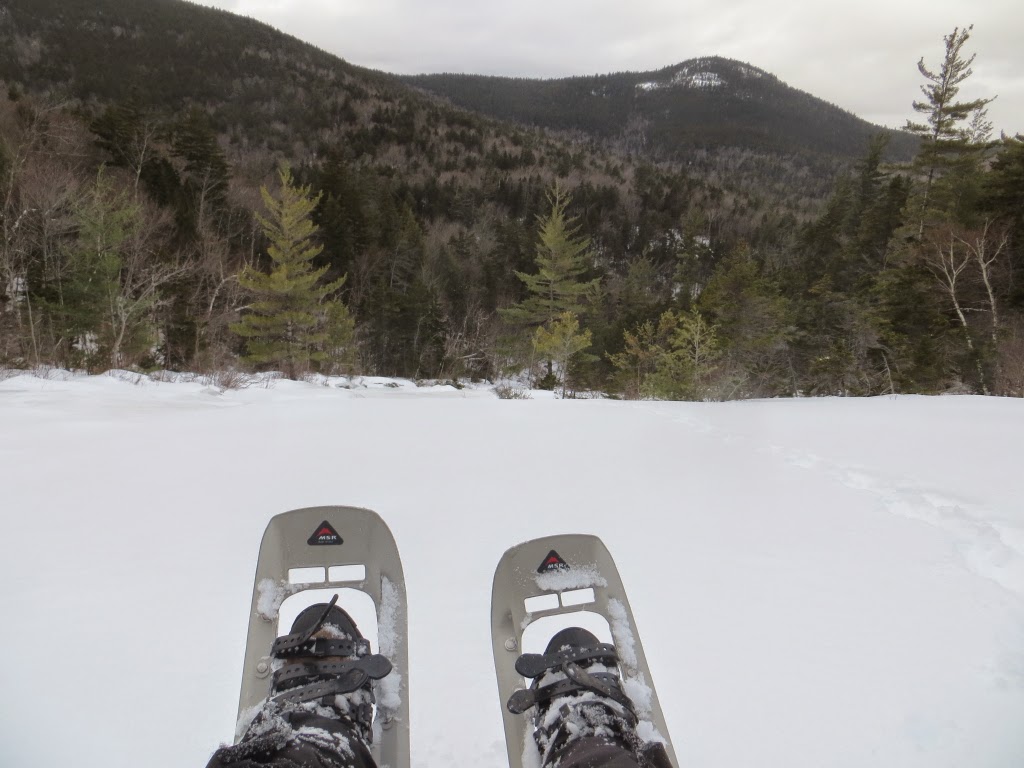 Looking across at my hangout spot. 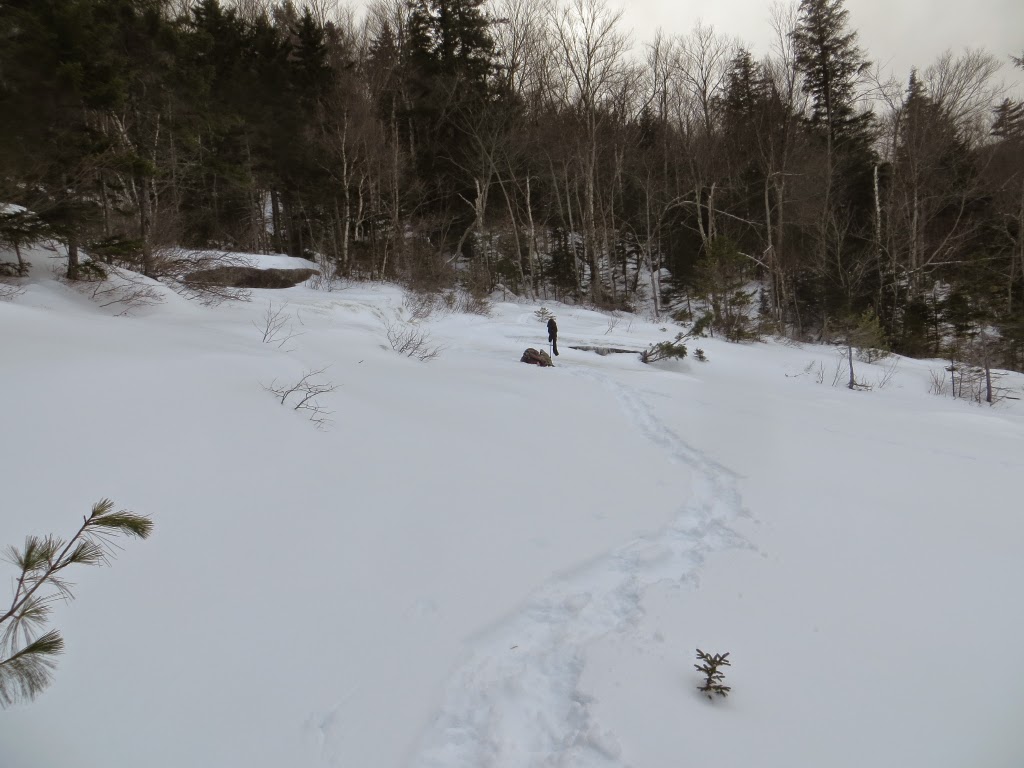 Trailless "South Potash" rises to the left of Potash Mountain. 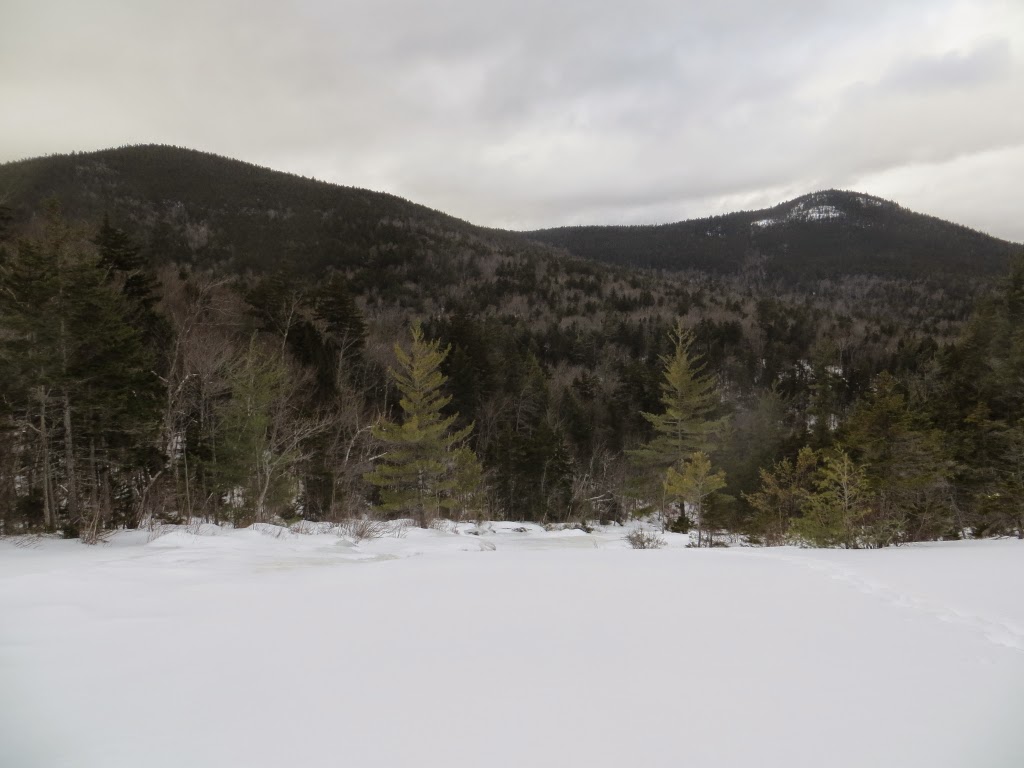 A gnarled little white pine struggles for survival on the bedrock. 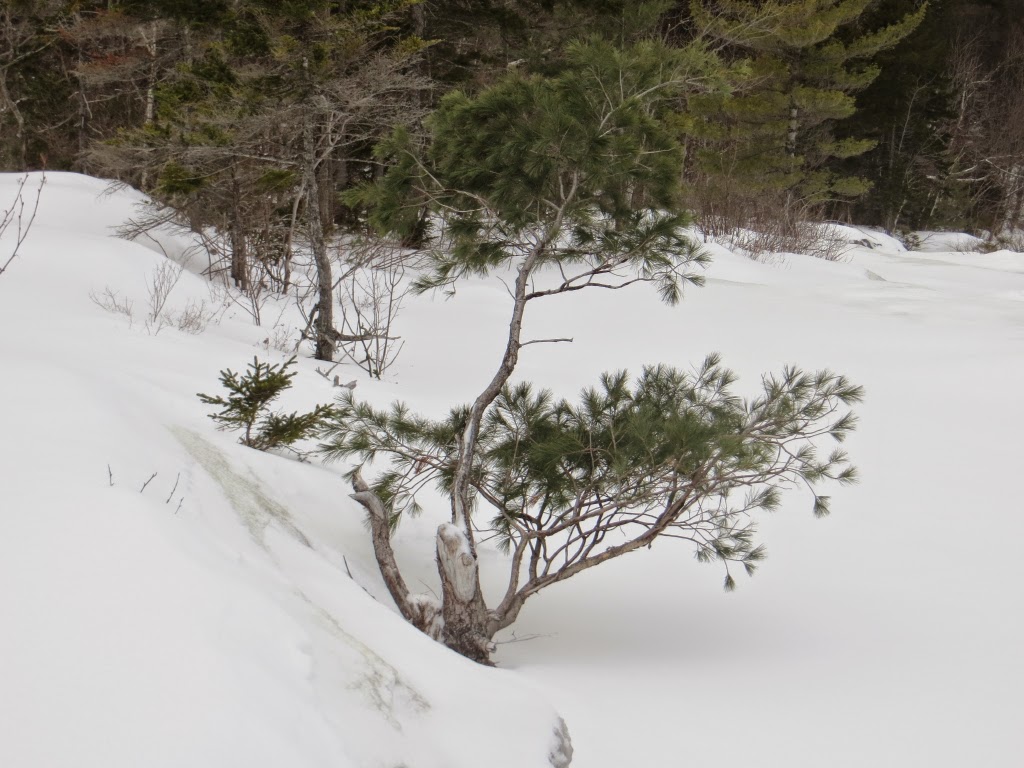 Upbound tracks on the right; downbound tracks, swooping and whooping, on the left. 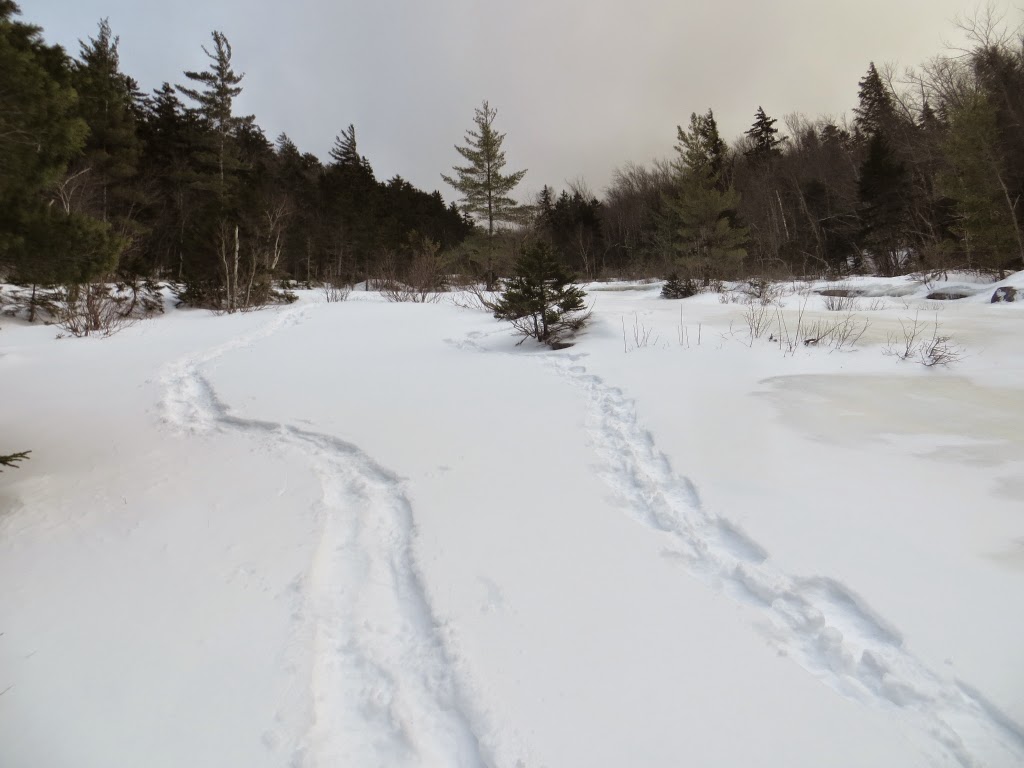 Going back down the streambed. 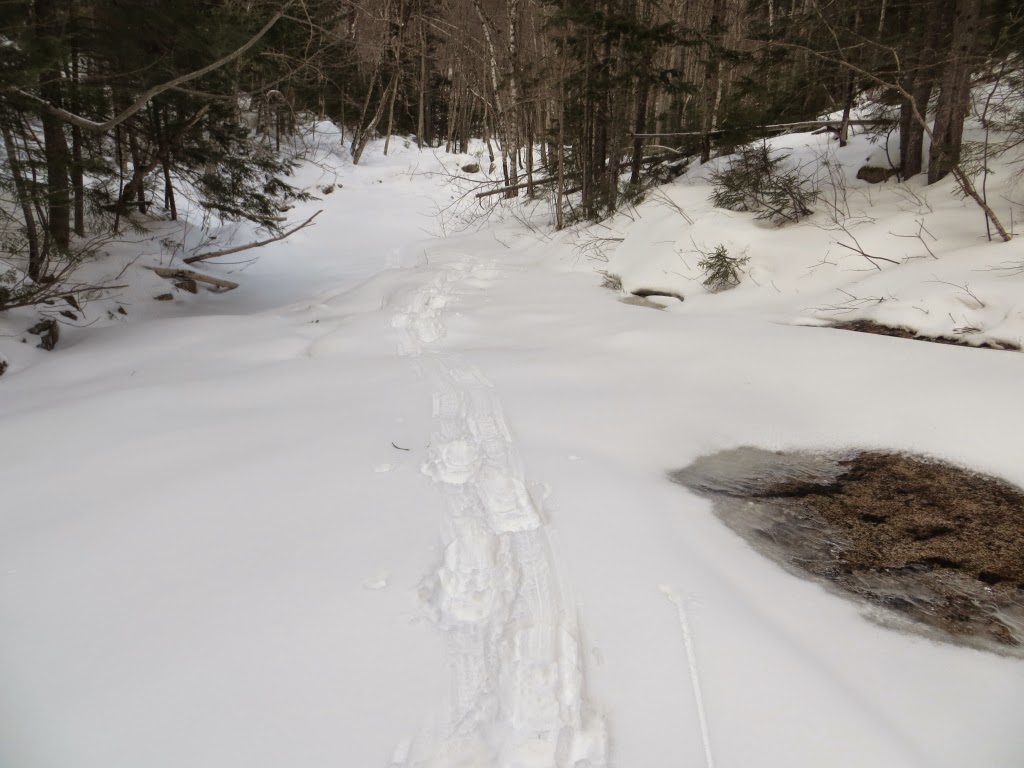 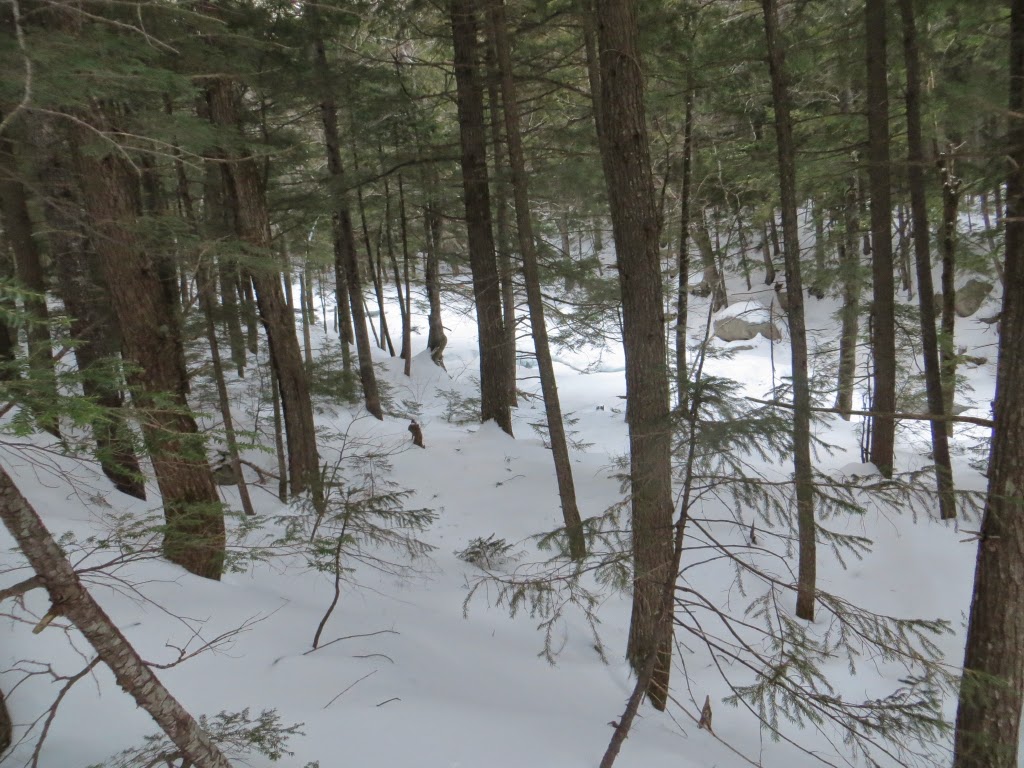 I had to break another mile of trail on the way back. Some stretches were postholed by moose. 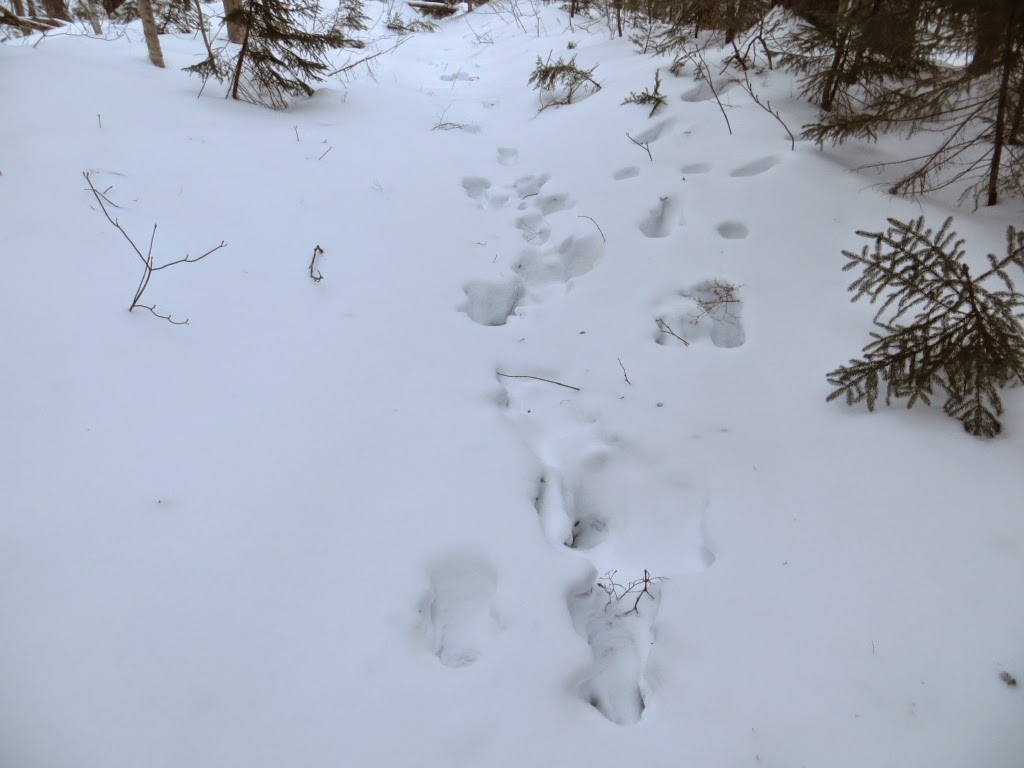 Interesting formations at one of the four crossings of Downes Brook. I had taken a bit of a gamble on this, since I'd only done one of the four on the way in, but all were doable with care,. The most exciting was the lowest one where, with dusk drawing on, I scooted quickly across some hollow-sounding ice. All in all, it was a fine journey for a gray winter day. 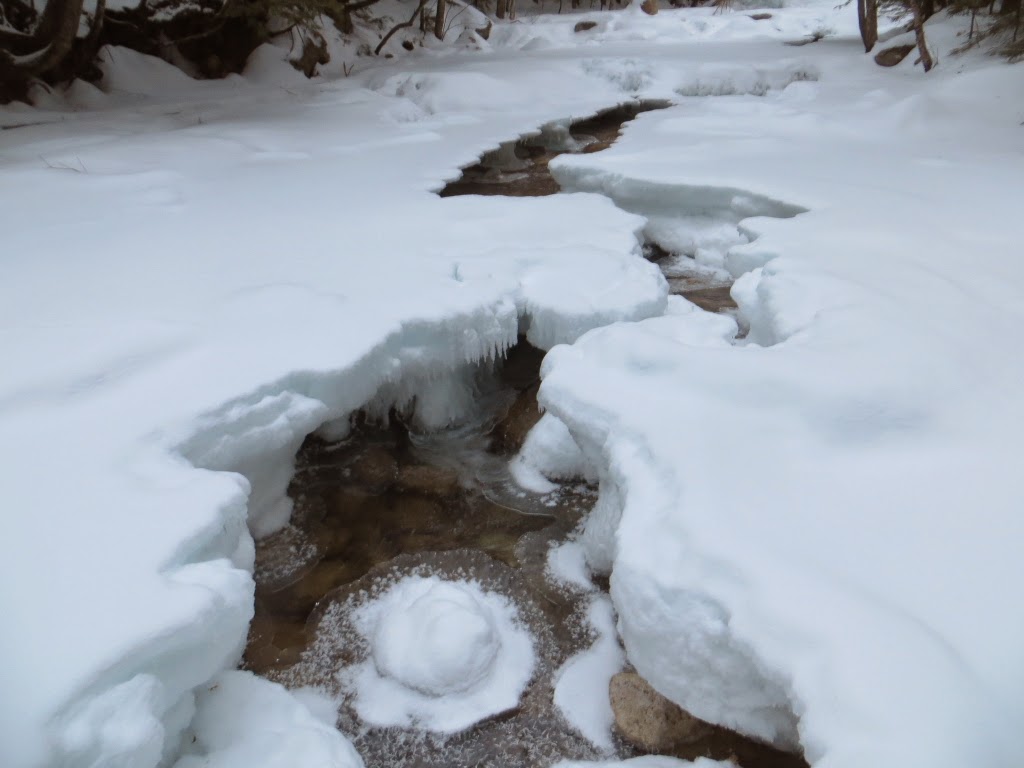