I enjoyed a snowshoe ramble in the Hancock neighborhood on a cold January day with highs in the single numbers and some afternoon "snow drizzle." I had seen on newenglandtrailconditions.com that Per Frost (LongMark) had broken out the Hancocks solo on Monday, following the Saturday night snowstorm. Here are Per's tracks on the railroad grade section of the Hancock Notch Trail. 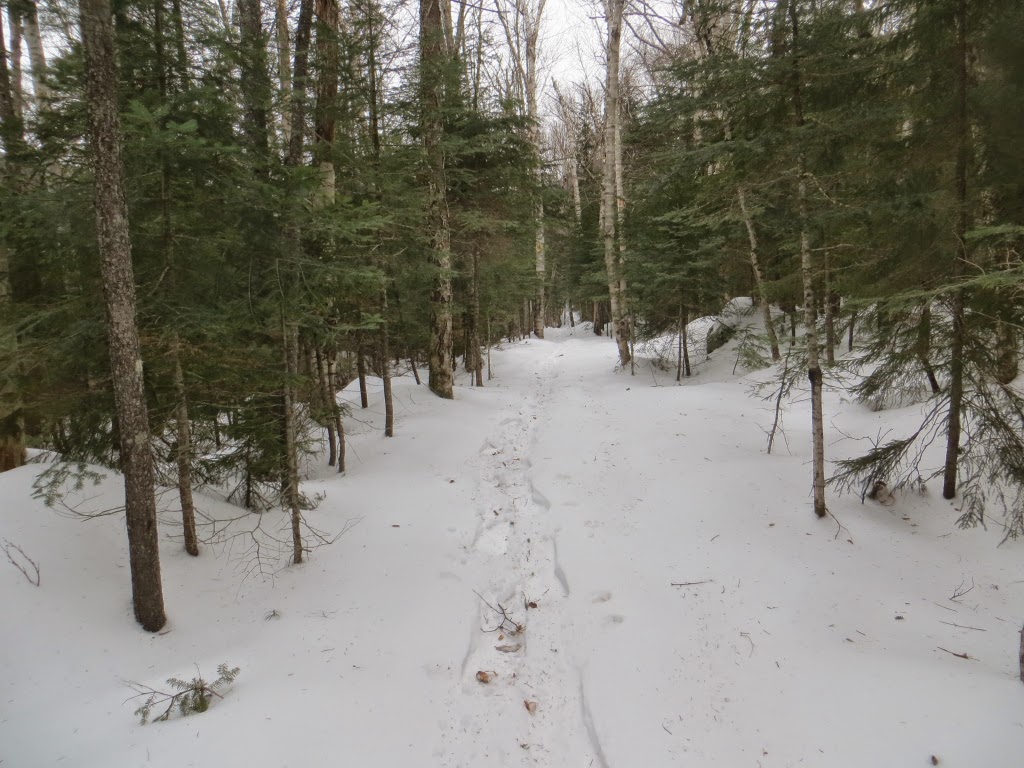 Part of South Hitchcock above the North Fork of Hancock Branch. 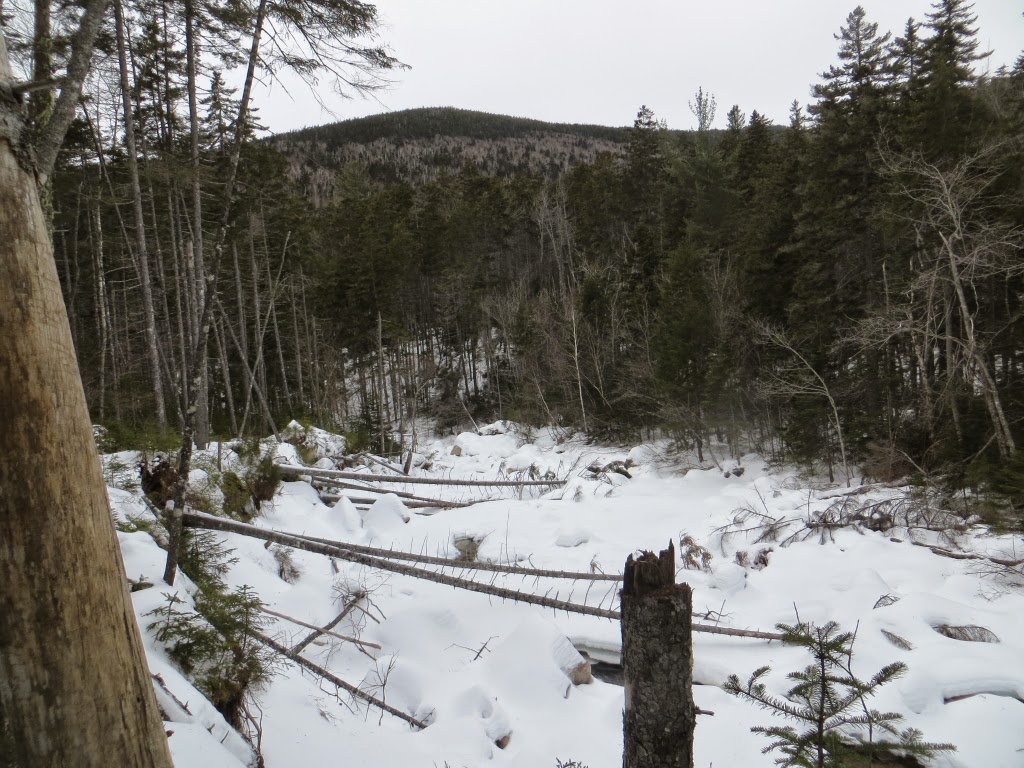 I had thought of going up South Hancock, especially with two younger guys on snowshoes starting right after me. I had visions of a nice track packed by three sets of snowshoes. I was puzzled when they still hadn't passed me a mile in; then they bombed past me barebooting it, having left their snowshoes behind. I decided I didn't want to deal with the chewed up trail all the way up and back, and went to Plan B, a visit to a bog west of the Cedar Brook Trail. 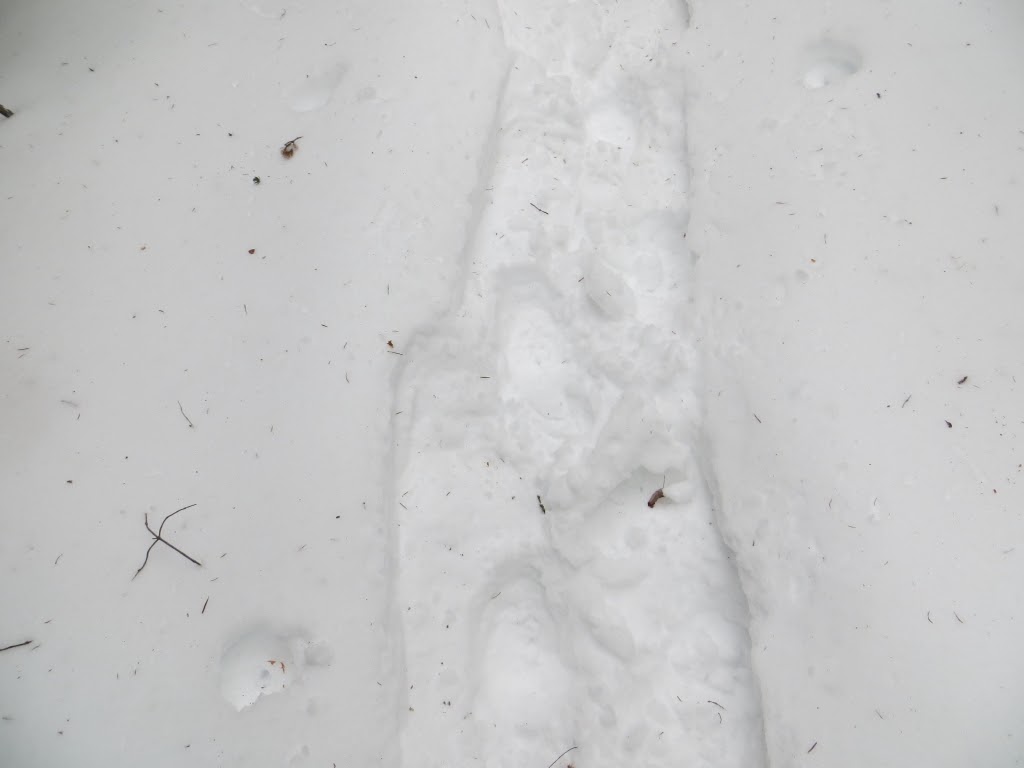 The streams are freezing up nicely. 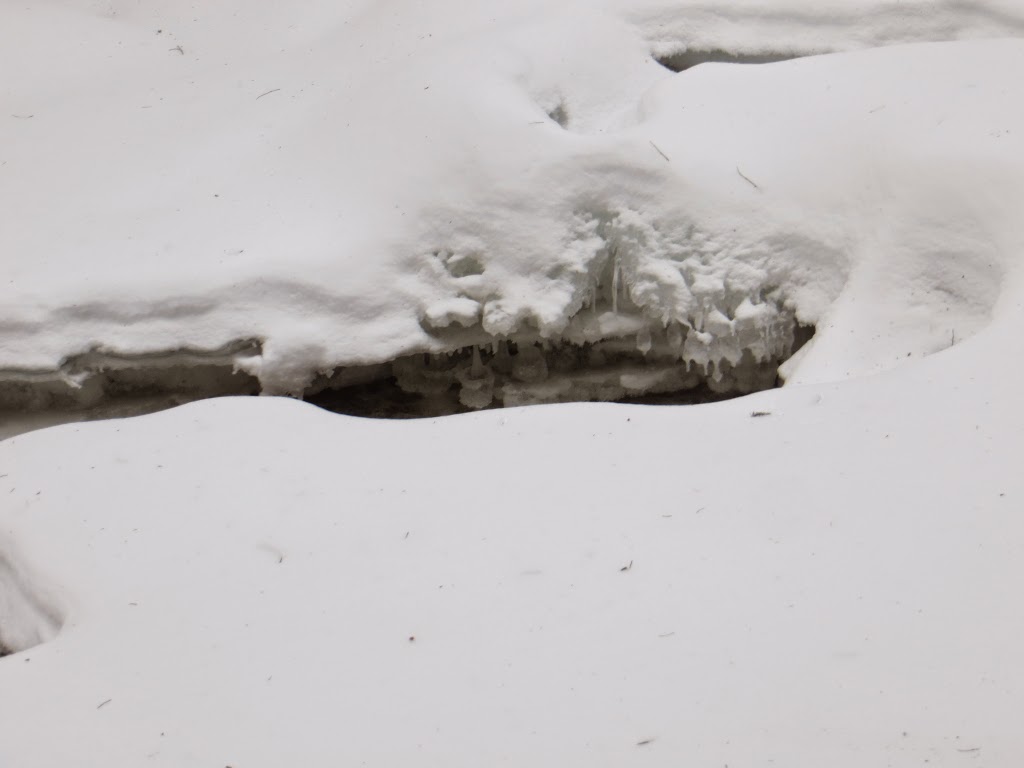 The North Fork at one of the crossings on the Cedar Brook Trail. 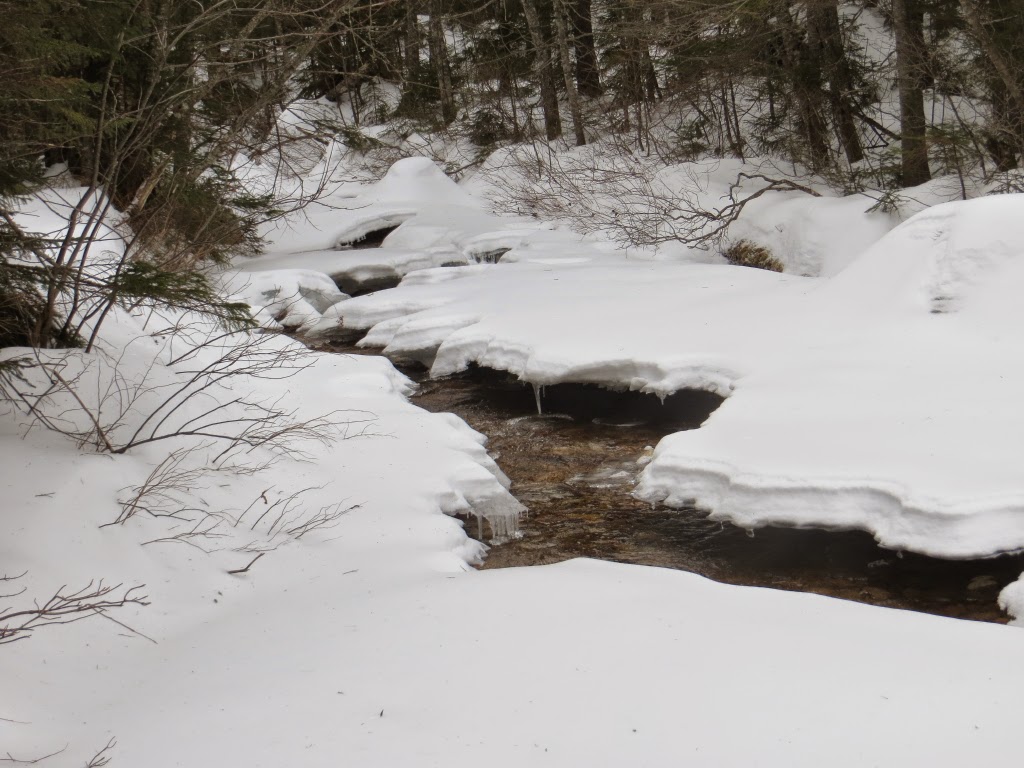 I meandered through open spruce woods out to the bog. 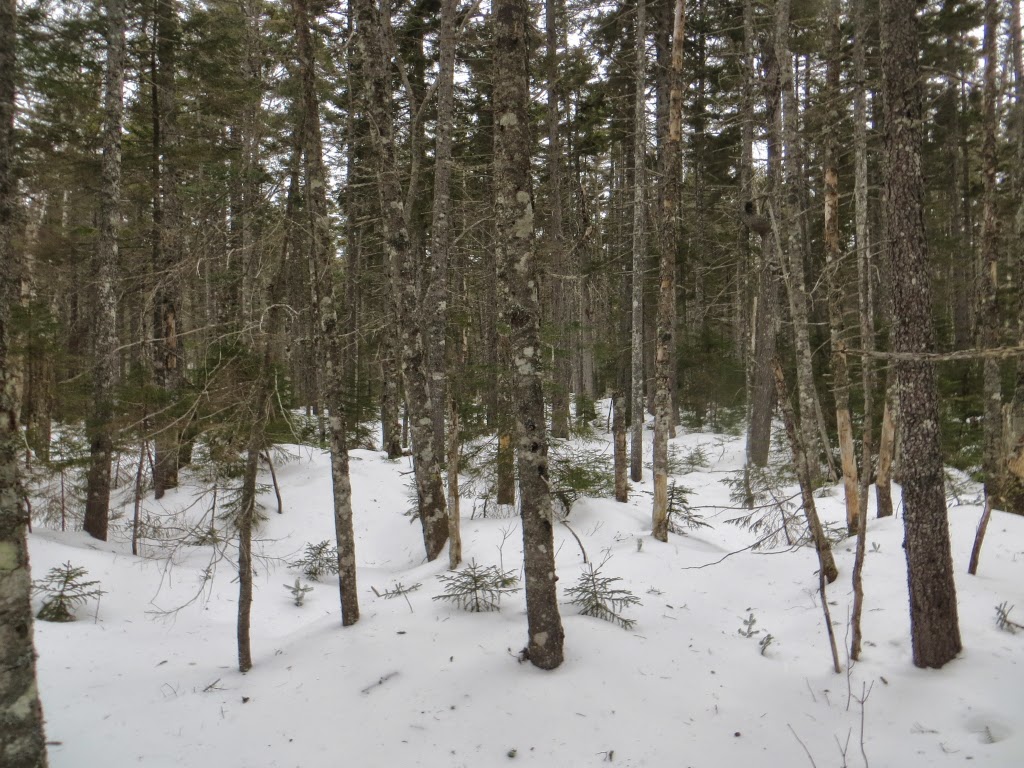 The Hancock Bog, feasible only for a winter visit so as not to trample moss and other fragile vegetation. 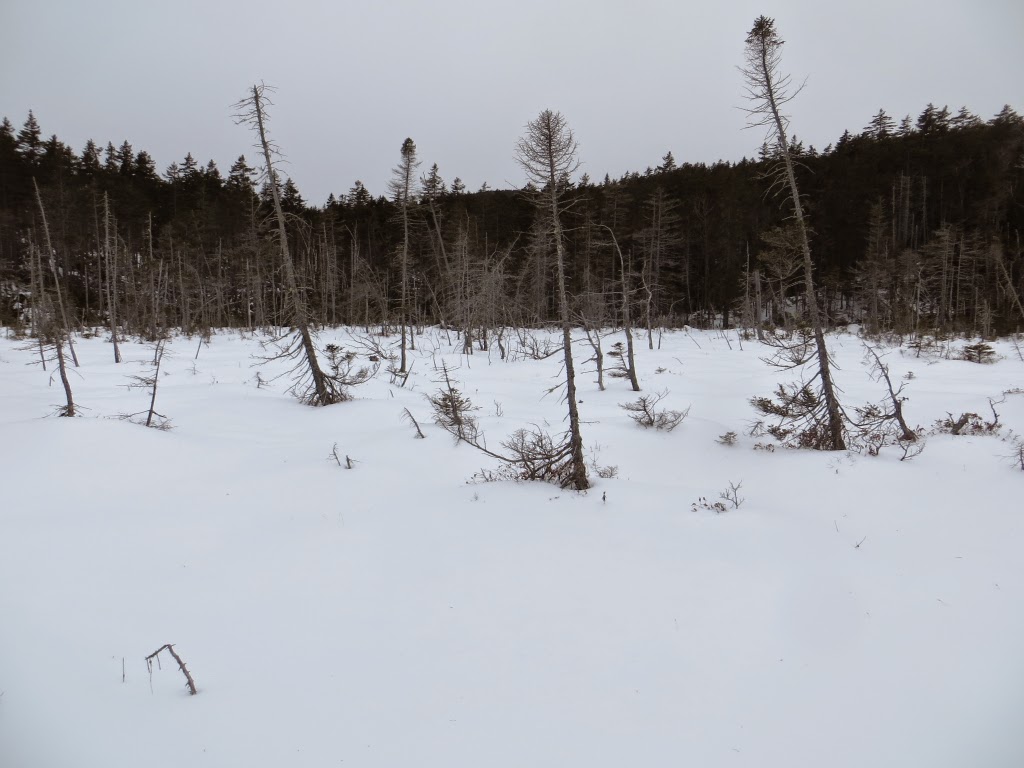 The bog offers a number of interesting views. Here you can see how wide a gap Hancock Notch is. 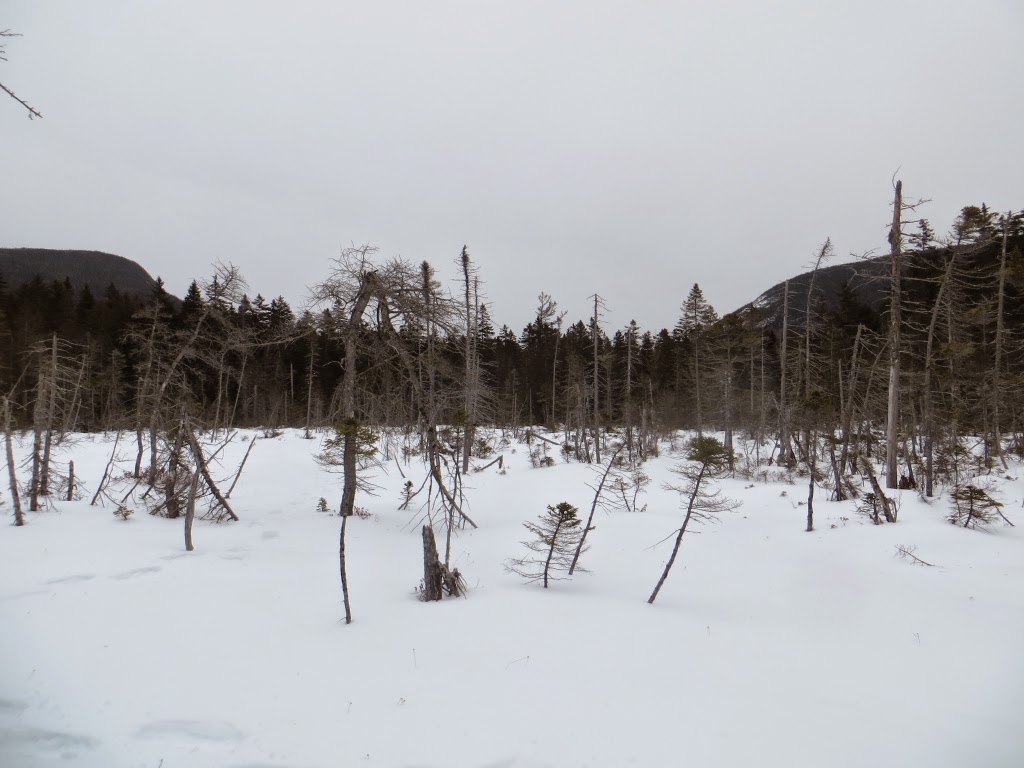 Mt. Huntington, on the south side of the notch. 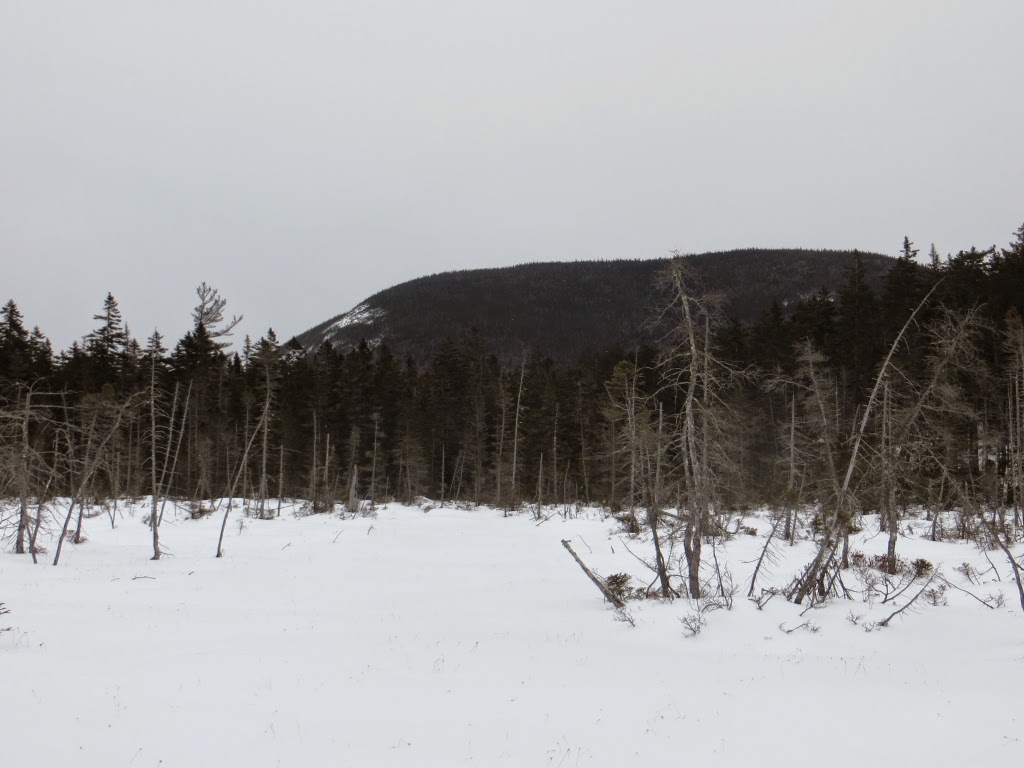 The Hancocks: North, South and the unofficially named Juno Peak. 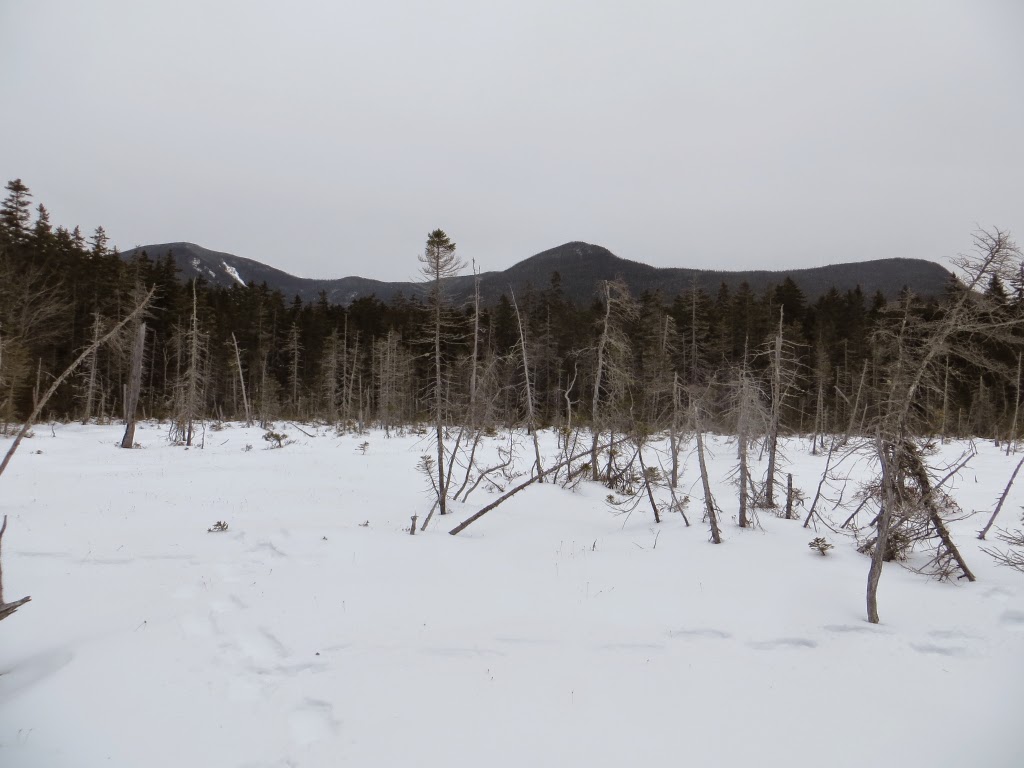 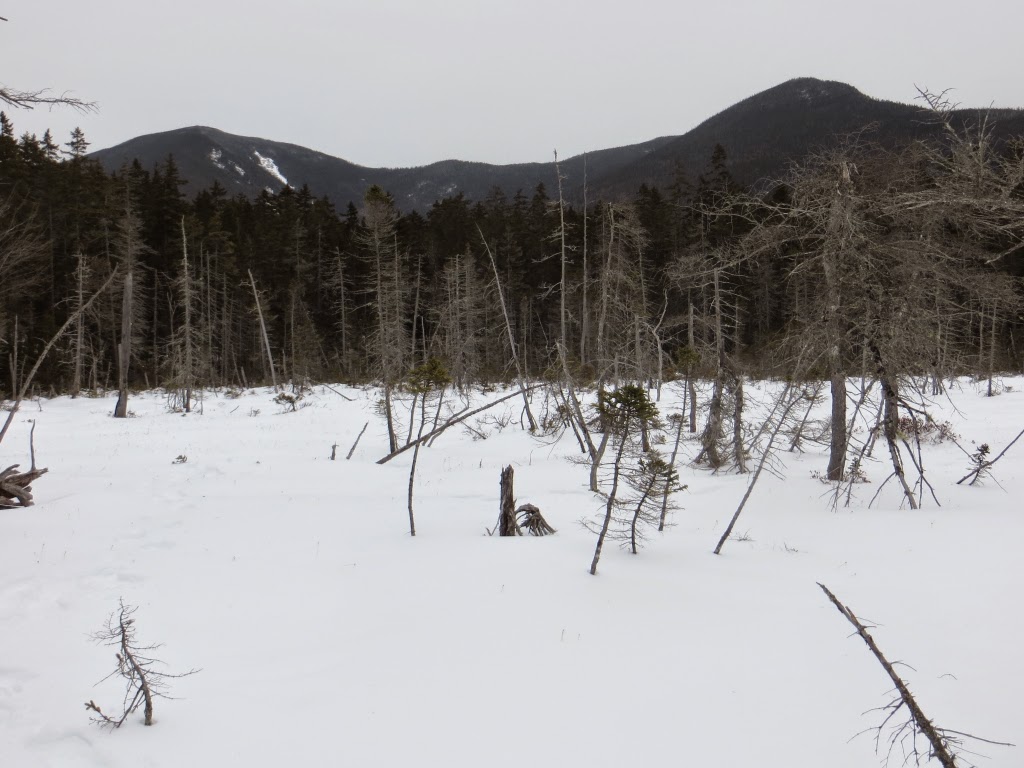 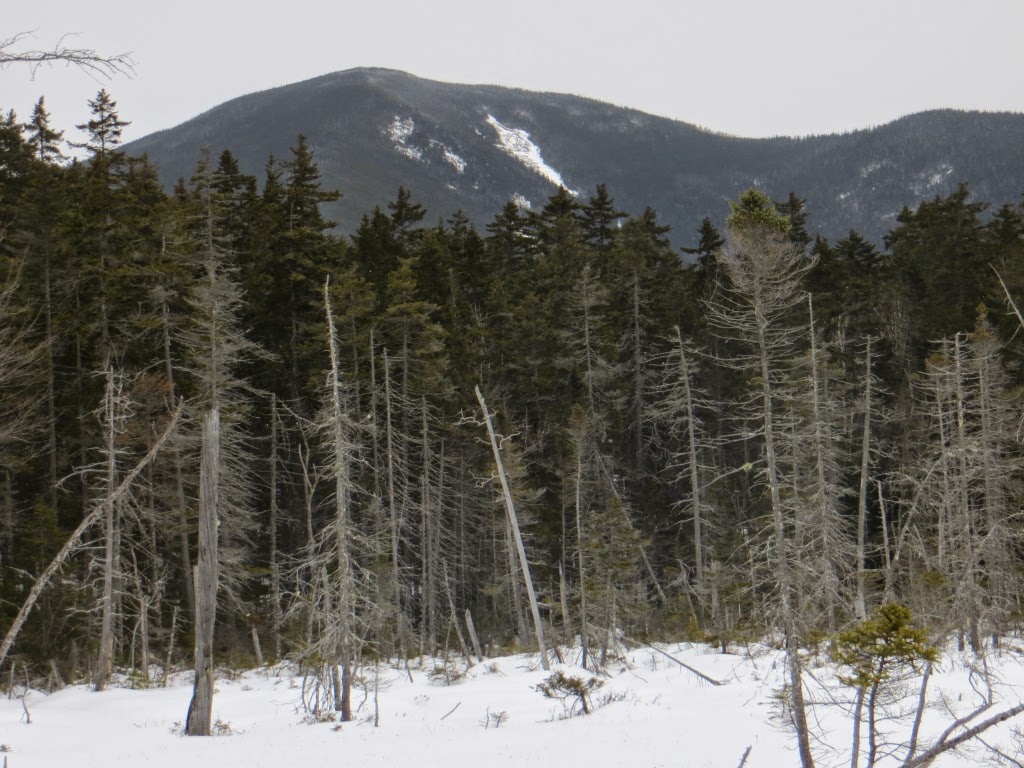 South Hancock is a dark pyramid from this vantage. 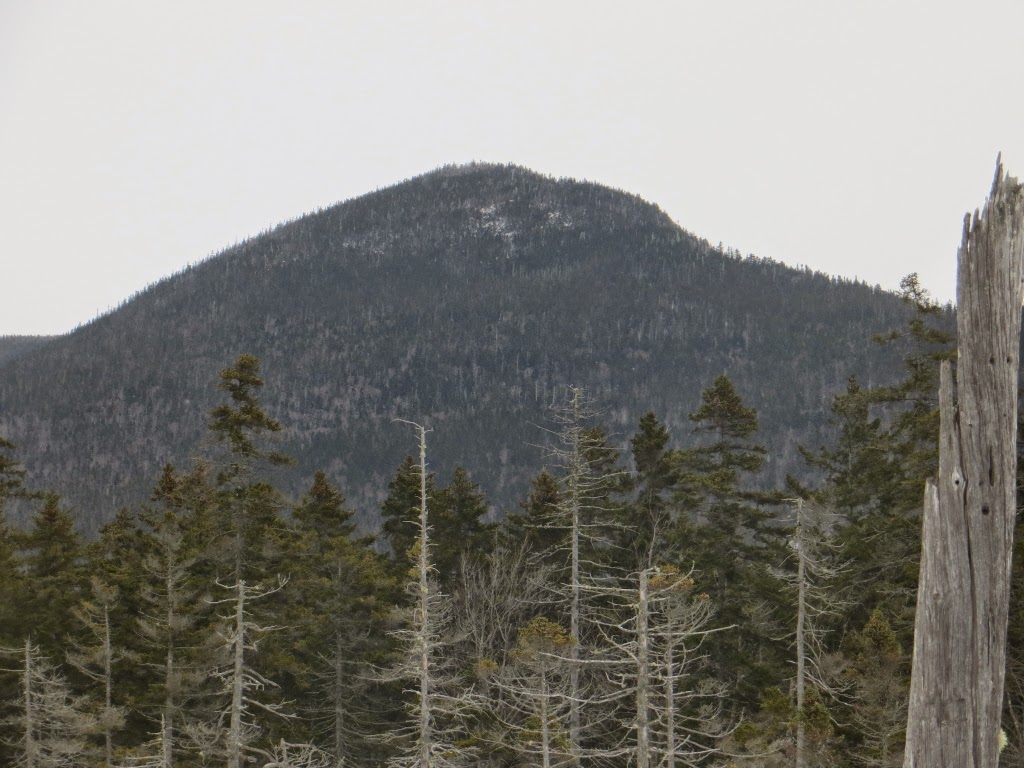 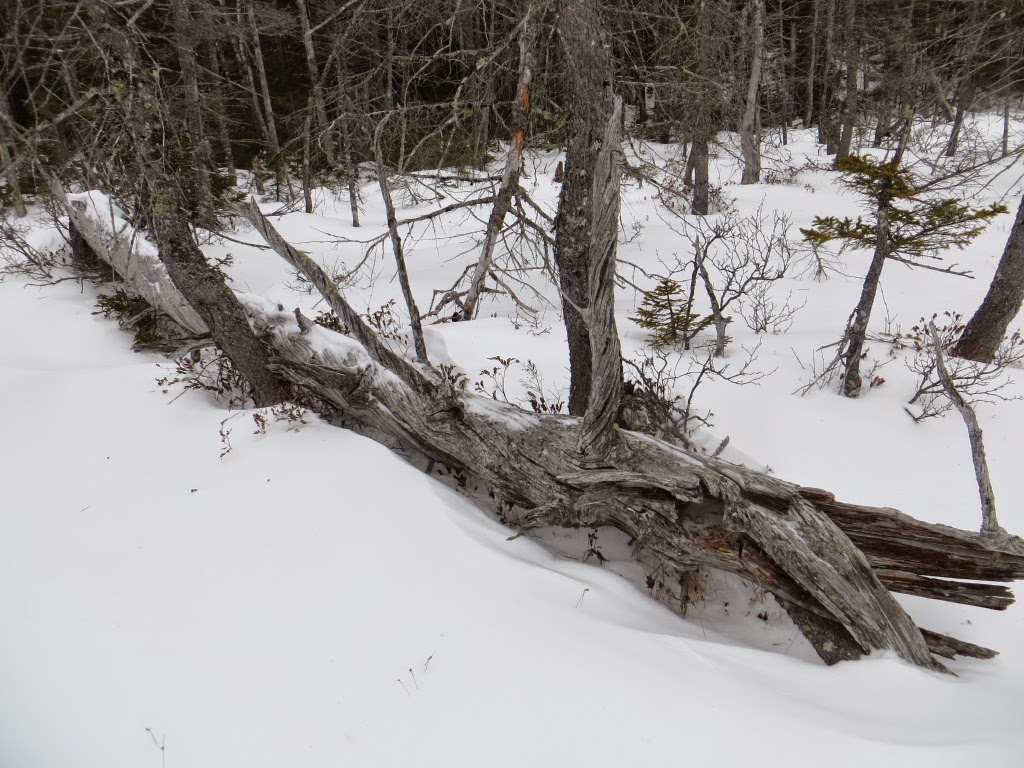 Upon returning to the junction, I decided to break trail up to Hancock Notch, a remote and wild spot in winter. 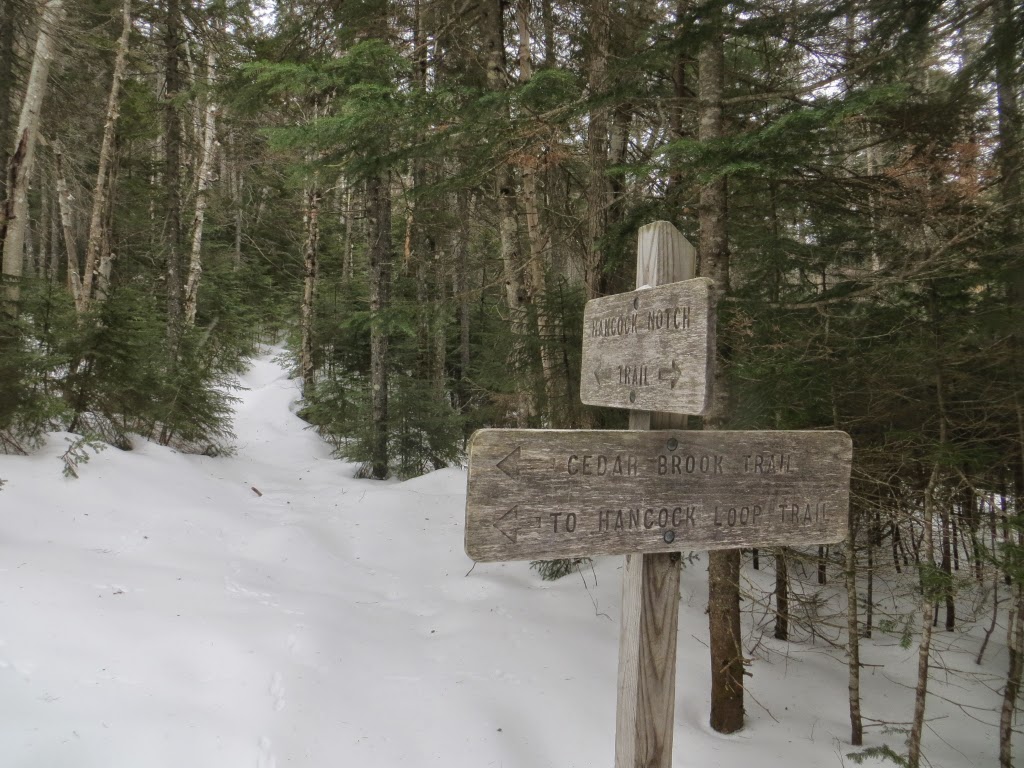 A 20-foot hands-and-knees crawl was required to get under this blowdown tangle. 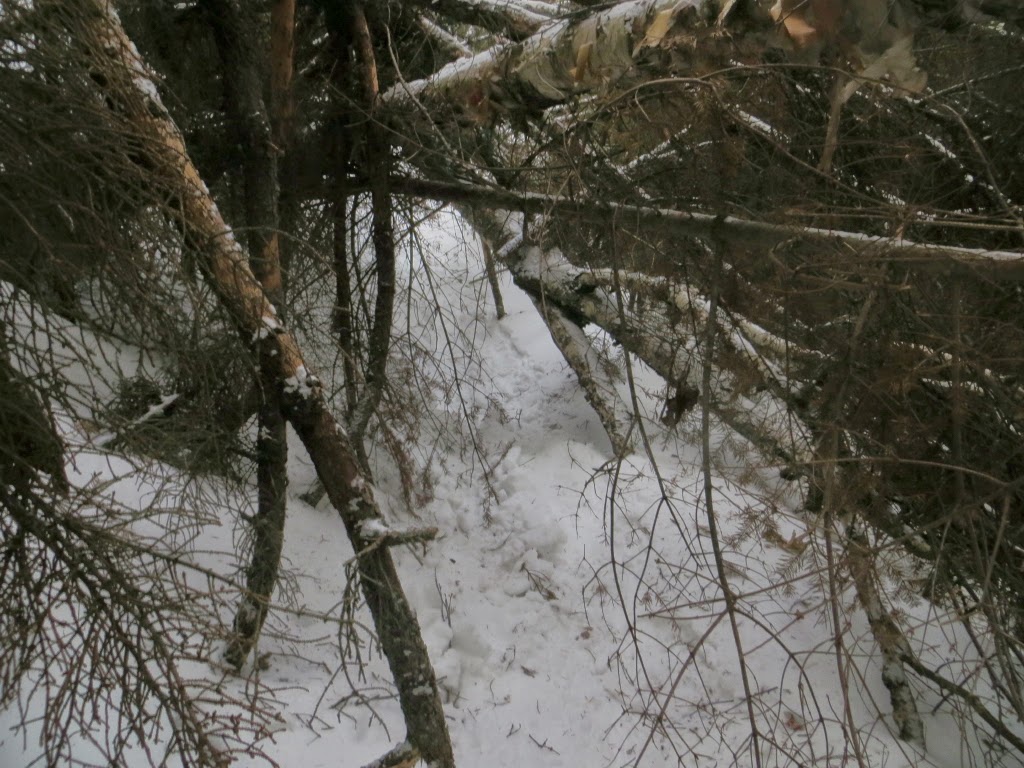 The trail had many mounds and gullies, making for awkward breaking at times. After taking an hour plus to cover 0.8 mile, I tipped my snow-caked hat to Per Frost for breaking out the entire route to the Hancocks solo. 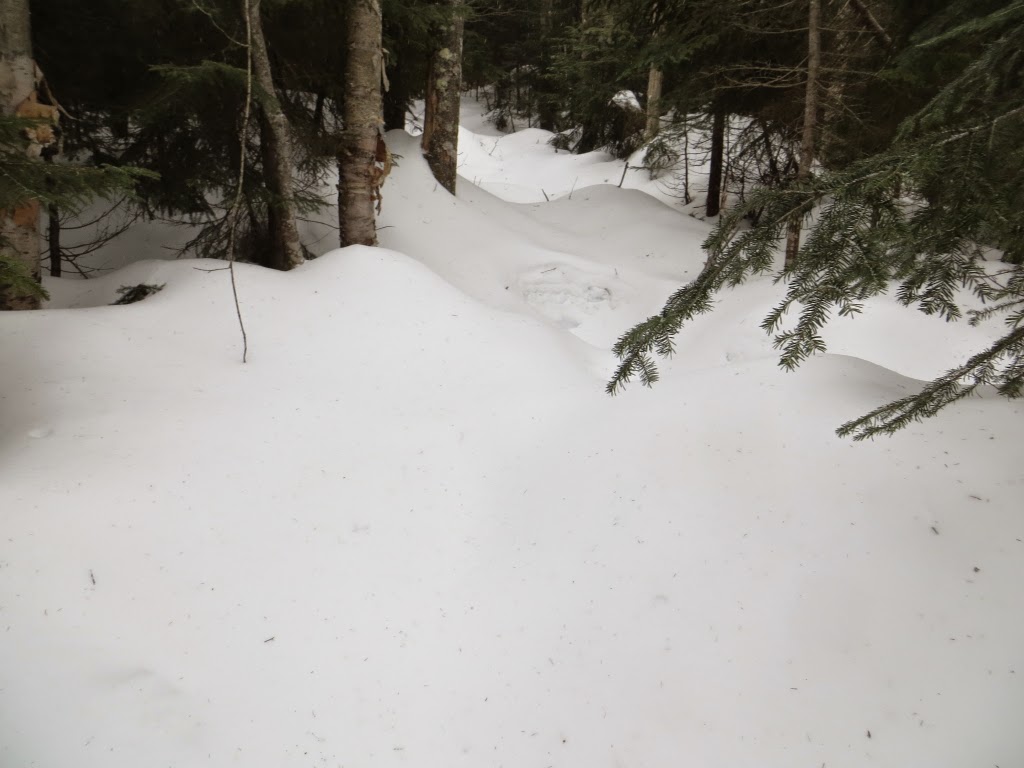 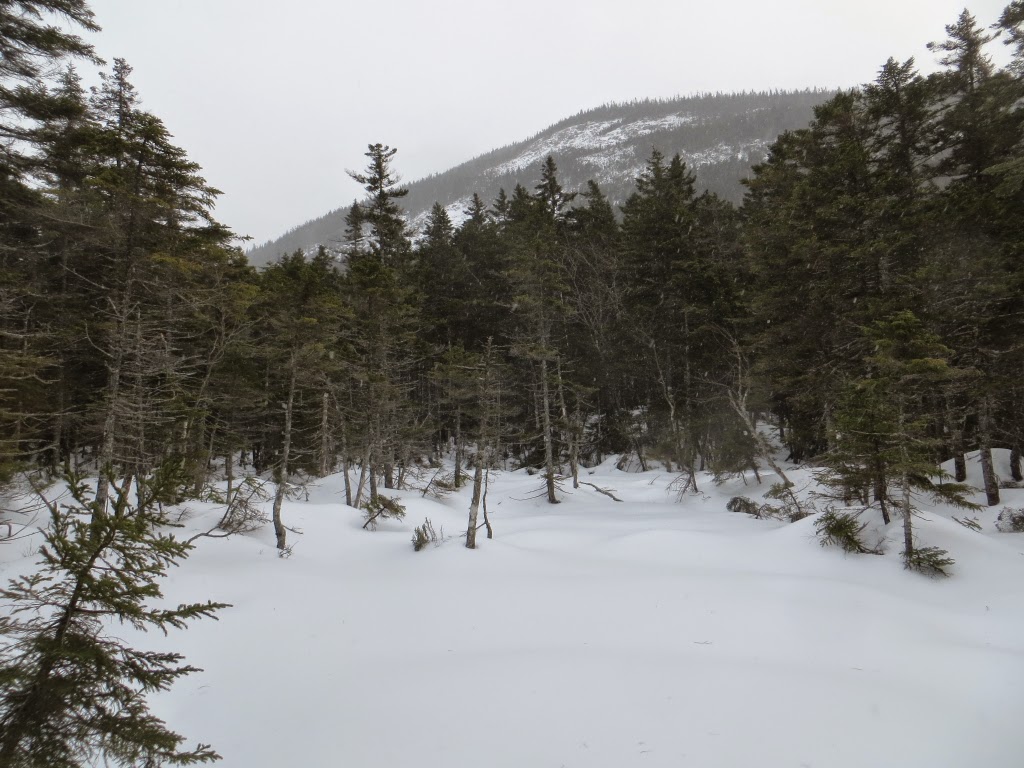 Wandering off-trail through open spruce woods along the broad floor of the notch. 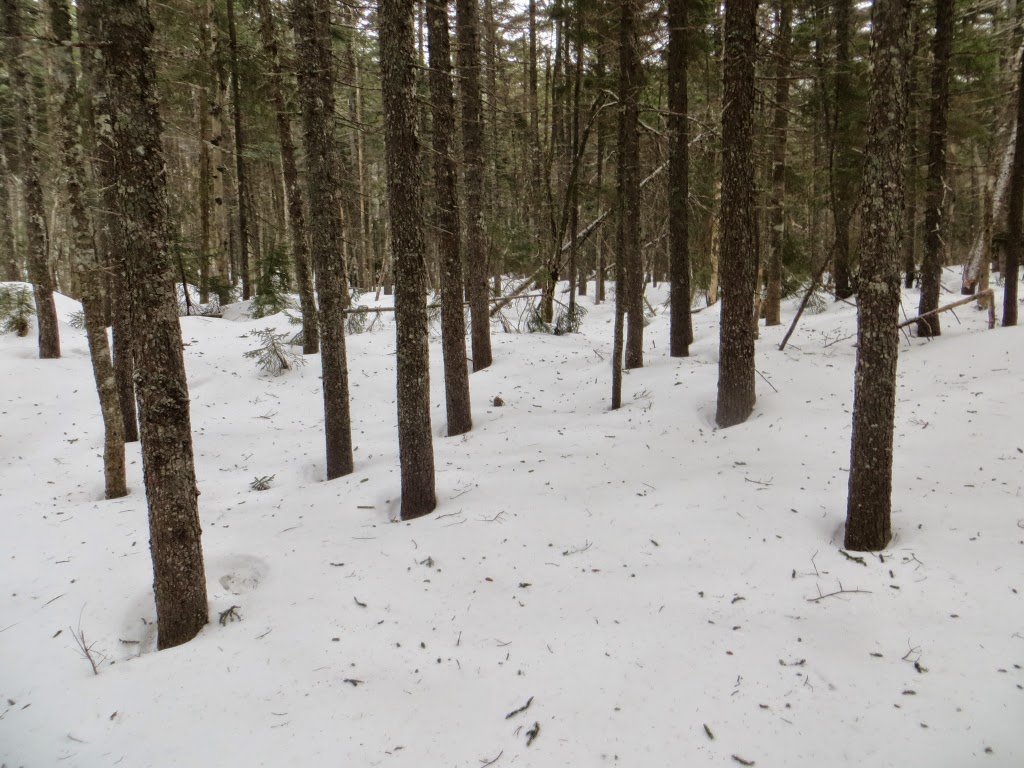 A closer look at the cliffs. I've whacked to the talus below the cliffs several times for their unusual views, but didn't feel like tussling with scrub for snow-fuzzed views today. 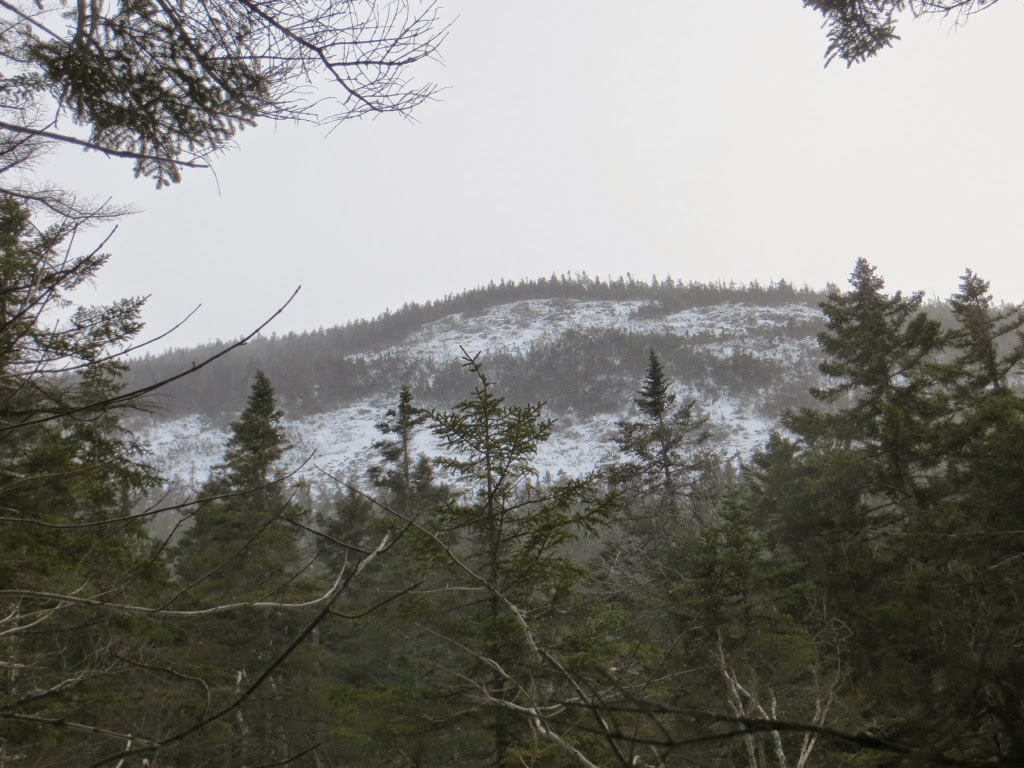 Back across the bog. 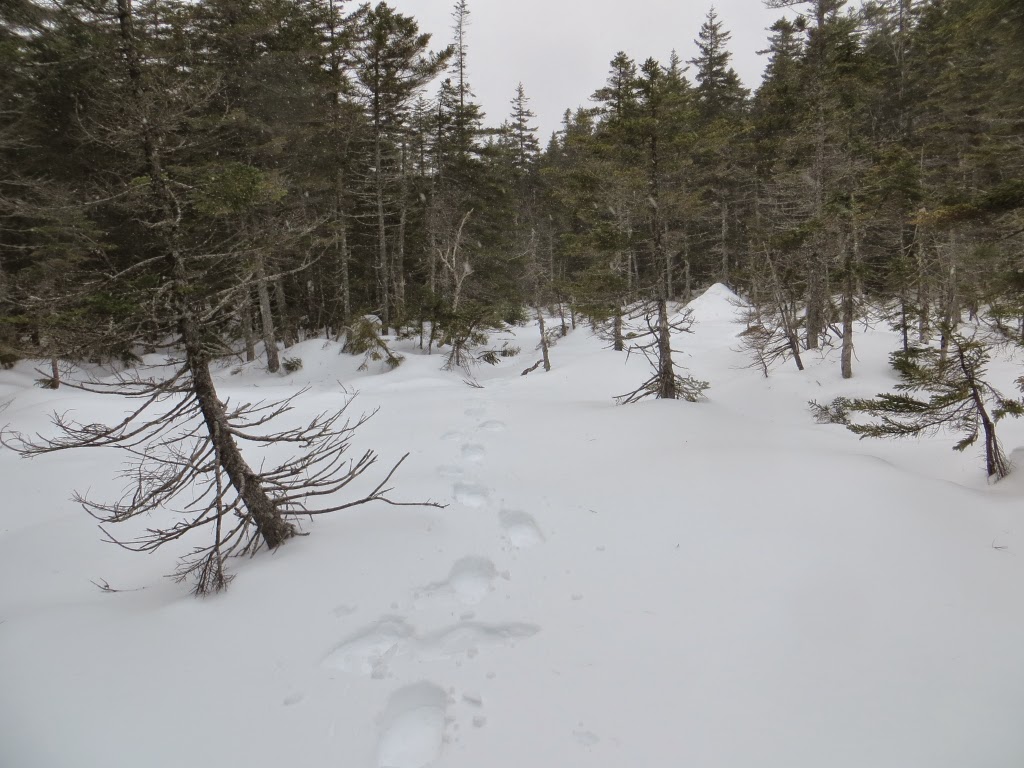 Retracing tracks down from the notch. 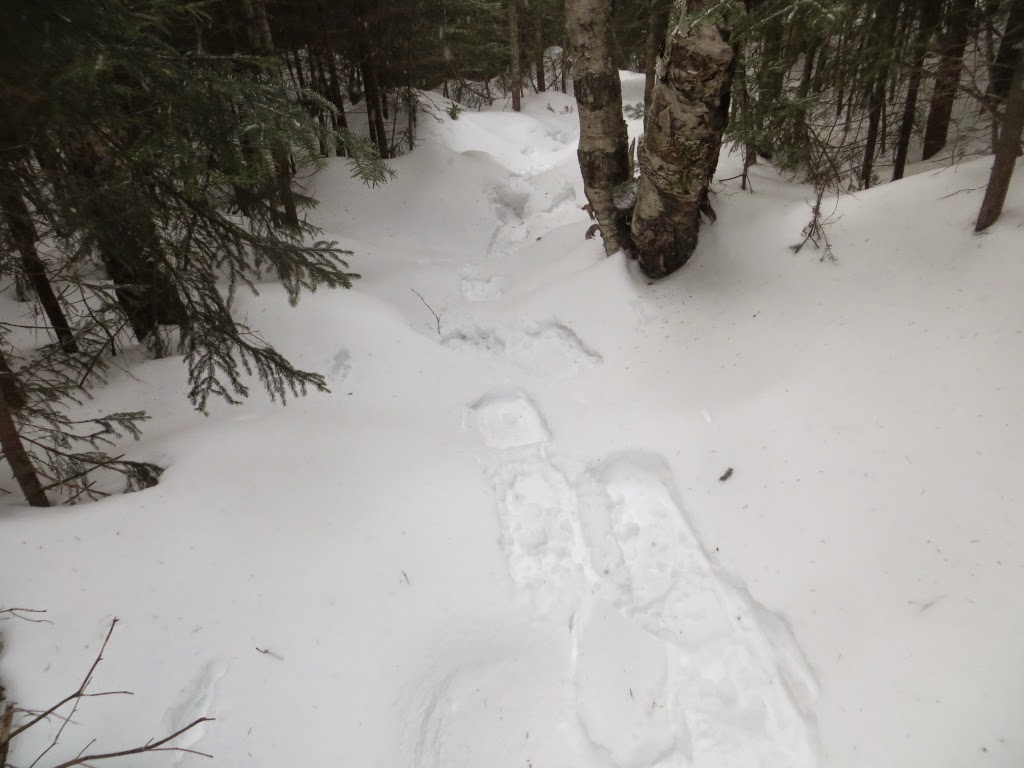 The shiny snowshoes that were left behind. 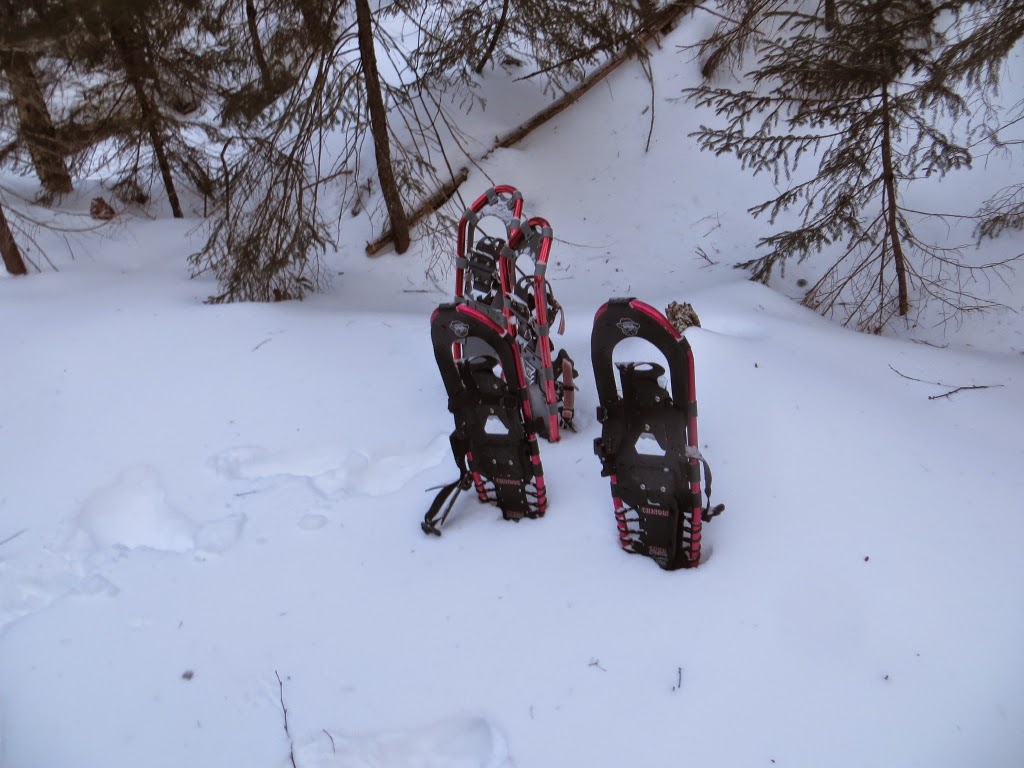