After getting some beta from Erin Paul Donovan and Amy Patenaude, both of whom had recently done this hike, I checked out a newly marked legal hiking route on the ski trails/service roads of Mittersill and Cannon ski areas. The development of this hiking route was mandated by a bill passed by the NH Legislature. (The bill originally related to leasing the Cannon ski area to a private company, but only the hiking route provision made it into the final bill.) Blazed in yellow, the route is a mixed bag as far as footing goes, but offers tremendous views, especially from ledges at the summit of Mittersill Peak.

The route starts by the new Mittersill chairlift, at a parking lot off the road into Mittersill Alpine Village. 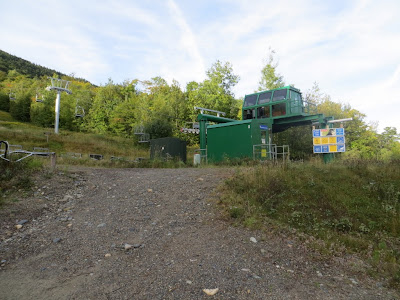 The grassy corridor at the start shows that it hasn't received much use yet. 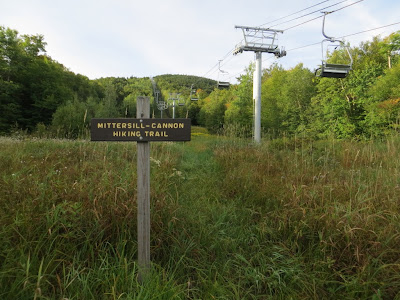 Yellow blazes, many on thin metal posts, mark the route throughout. 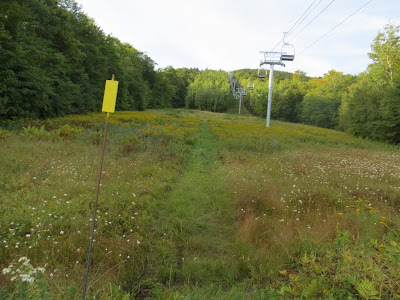 A nice shaded grassy section not far up. 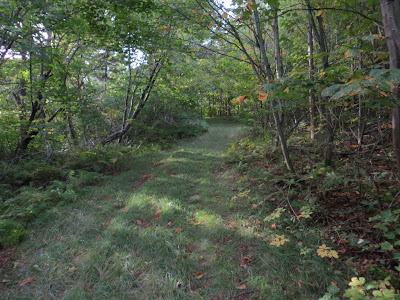 The least attractive part of the route is a 0.25 mile/400 ft. climb up a steep, loose section of a gravel work road. It seems every hiking route up Cannon needs to have an ugly stretch. 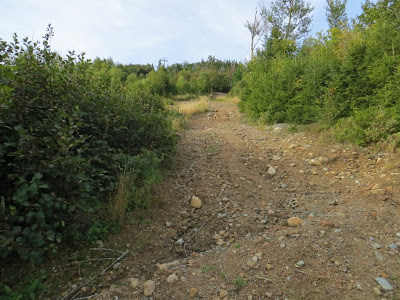 The views compensate for the bad footing. 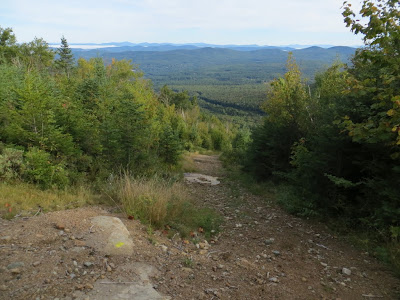 Part of an old lift rusting in the woods. Mittersill Ski Area was originally opened in 1946 by Baron Hubert von Pantz of Austria. After several poor snow years, it closed in 1984. It was acquired by the state and reopened for skiing in 2009, and the new chairlift was installed in 2010. 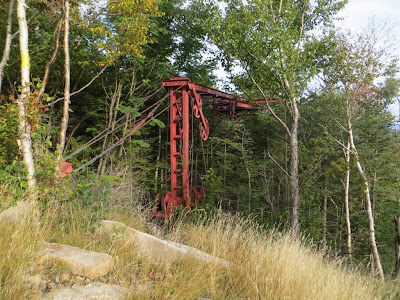 A pleasant section of the route. 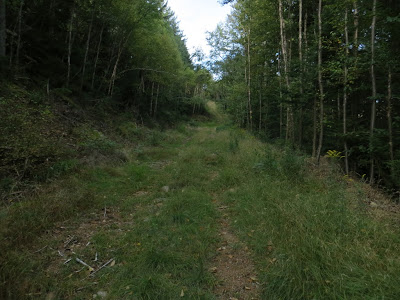 The turns onto various ski trails are well-marked. 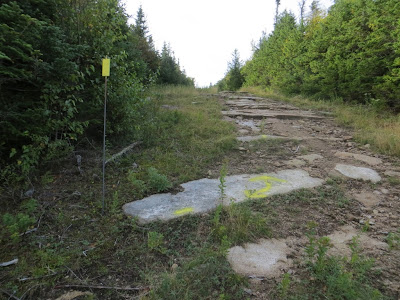 Morning fog lingers in the valleys to the NW. 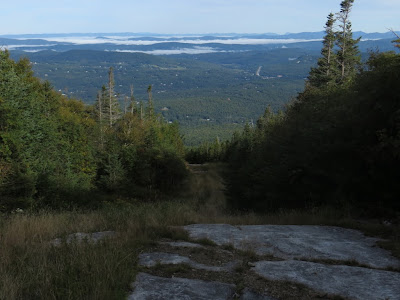 After passing the upper terminal of the chairlift, the route follows the historic Richard Taft Trail, cut by the CCC in 1932. 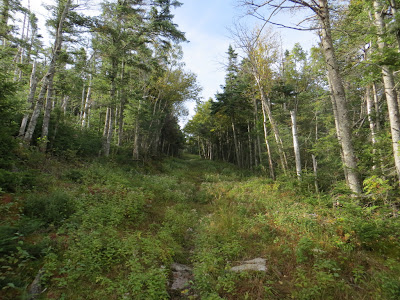 Lots of asters blooming through here. 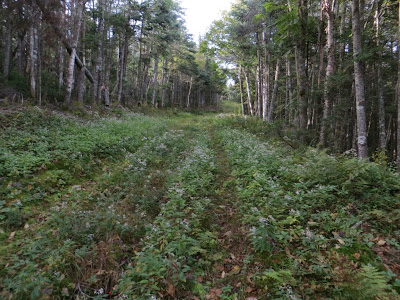 The entrance to the backcountry Tucker Brook Ski Trail, with its famous "13 turns." 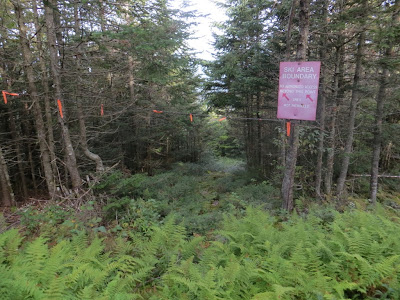 The open summit of Mittersill Peak (3630 ft.), a NW spur of Cannon that was once called Mt. Jackson. 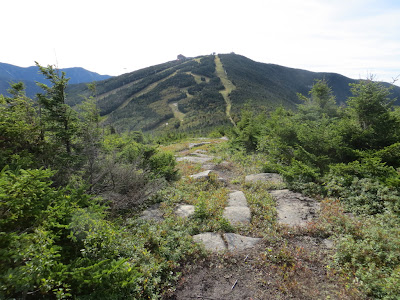 Ledge perches beside the trail offer some excellent views, including this look at Coppermine Col, the deep pass between Cannon and the Northeast Cannon Ball. 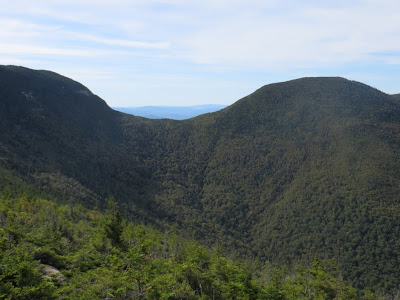 Nice vista of the Cannon Balls and Kinsmans. This is a nice spot to hang out for a while, with a wide view west to Vermont as well. 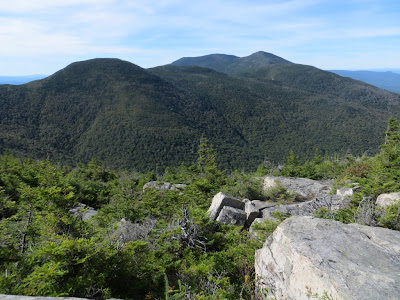 Looking back at Mittersill Peak while climbing the Upper Ravine ski trail towards Cannon's summit. 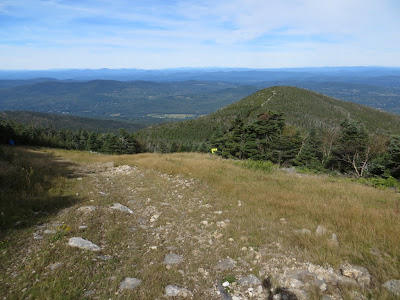 From the summit tower on Cannon, the views were phenomenal this day, with 110-mile visibility reported by the Mount Washington Observatory. In this photo, Camel's Hump, the Worcester Range and Mt. Mansfield (L to R) are clearly visible on the Vermont horizon. 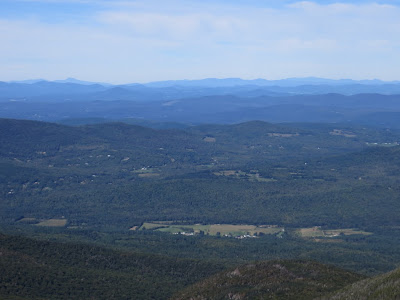 It was an Adirondack day, with Macomb Mtn. visible through Lincoln Gap in the Green Mountains. 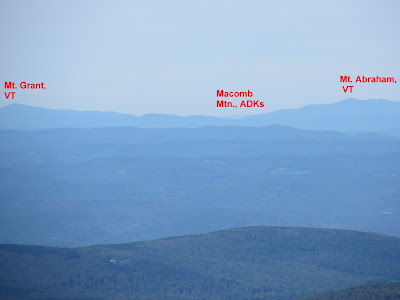 Another angle on the Cannon Balls and Kinsmans. 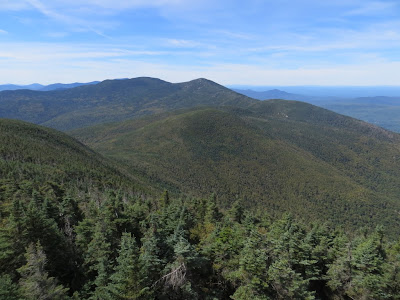 Close-up of the Kinsmans, with Mt. Moosilauke peering over in back. 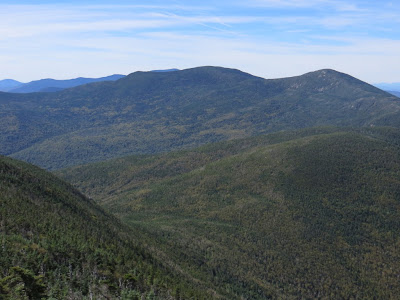 I-93 winding southward from Franconia Notch. 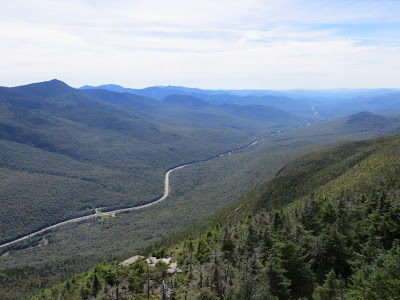 Looking down into the Coppermine Brook valley on the west side of Cannon. 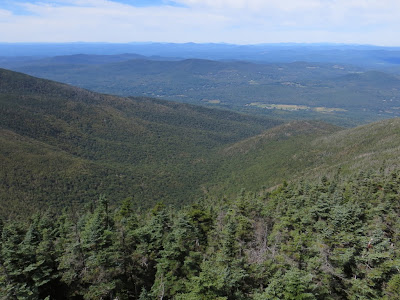 The bulky south ridge of Cannon. 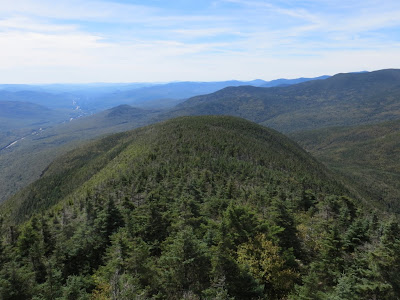 Hanging out in the tower. Saw only two hikers up there, along with a couple dozen Tramway riders. 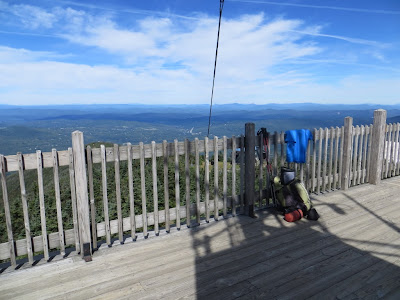 Benchmark under the tower. 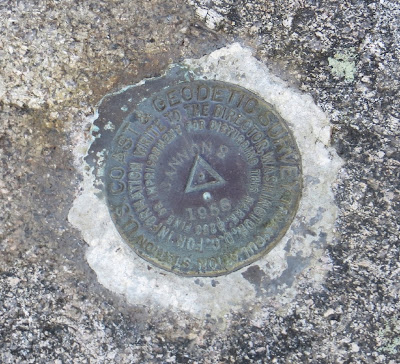 View of Franconia Ridge from the Rim Trail. 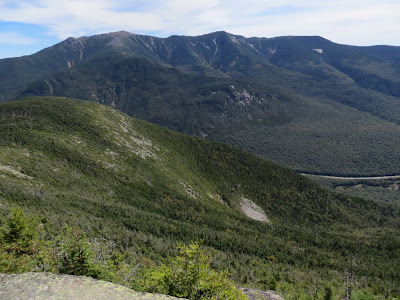 For the descent, the Mittersill route starts beyond this passage under the Tramway/summit cafeteria building. 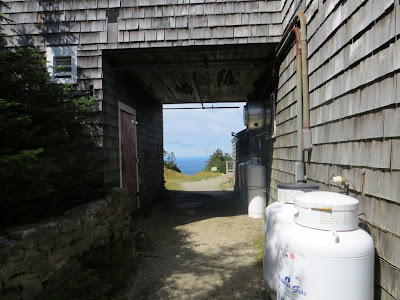 You walk into the views much of the way down. 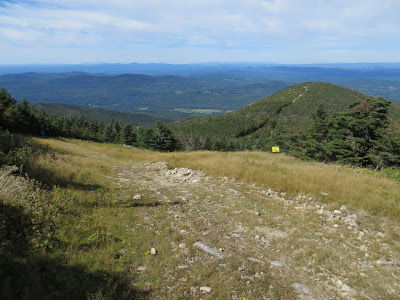 A field of goldenrod near the bottom of the route. This new option for hiking Cannon is an interesting and scenic alternative to the usual steep, rough and rocky fare on the regular hiking trails. It's a 5 mile round trip with 2500 ft. of elevation gain. 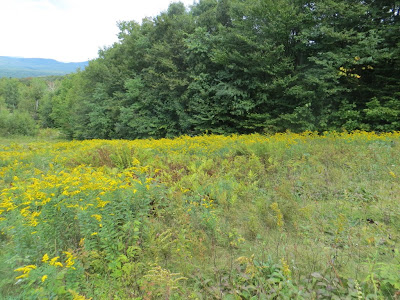