An exploration into the wild, trailless ravine of Little Tunnel Brook on the NW side of Mt. Moosilauke has been on my wish list for a number of years. It was the only one of the five major ravines on Moosilauke (the others being Jobildunc, Gorge Brook, Slide Brook, and Benton or Tunnel) that I hadn't explored. Old articles spoke of the now mostly forgotten "Nine Cascades" in the deep cut of Little Tunnel. Wrote town of Warren historian William Little in an 1887 issue of the Granite Monthly, "Little Tunnel stream, another branch, rises in the ravine between the high crest and Mt Blue. It has nine cascades, one more than two hundred and fifty feet high at a slope of seventy degrees which comes laughing, leaping, tumbling into a great basin at its foot. A huge cliff a hundred feet high from its brink looks down on the falling waters." From a high embankment above Route 112 I had seen this towering cascade as a frothy white squiggle emblazoned on the steep mountainside.

From the outlook partway up the Benton Trail you can peer into this ravine, and you can hear the cascades, but they are hidden from view. Not much information on the ravine could be found, other than some hints in Up Moosilauke, Jack Noon's wonderful book of historical fiction, and a helpful 2011 trip report on a Little Tunnel exploration by Jason Berard.

This was originally going to be a high peak day, but persistent clouds smothering the summits prompted a change in plans. My frequent bushwhacking partner, John "1HappyHiker" Compton graciously agreed to join me on a trip into Little Tunnel on very short notice. Before rendezvousing with John late morning along Tunnel Brook Road, I visited the embankment above Route 112 for a sneak preview of the tall waterfall, which looked to be in good flow. 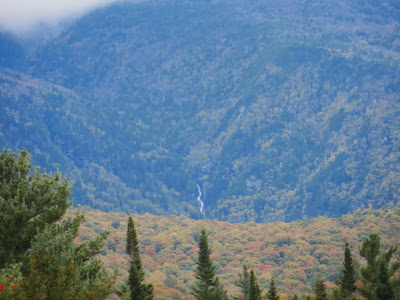 For our approach to the valley we decided to use the WMNF "Bunga Jar" logging road off Tunnel Brook Road. By chance I met a WMNF timber marker at the gate and learned that this road was quite walkable. Though slightly longer than a more direct approach, it saved us having to cross Tunnel Brook at the beginning and end of the trek. It turned out to be quite a pleasant walk, with some nice early fall colors on display. 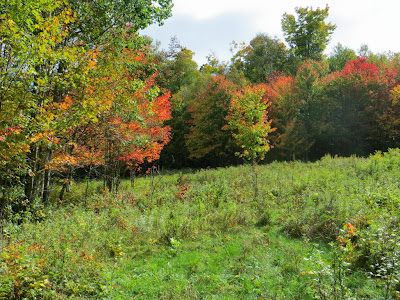 After an initial climb, this road had easy grades, and good footing except for a mucky stretch in the last 0.1 mi. 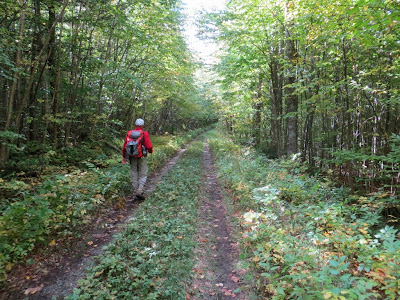 The road ended at a brushy old log landing, which will probably be put to use again with the upcoming Pemi Northwest timber harvest. 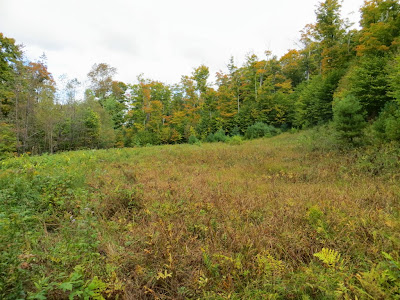 From here we bushwhacked across to Little Tunnel Brook, and enjoyed pleasant travel up the lower part of the valley, largely following an old logging road that at times seemed to be a trodden path, probably used by the local moose population. 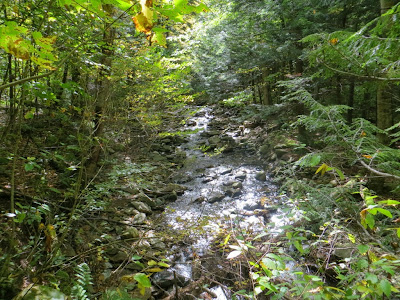 John capturing one of the many brook vignettes as we wandered up the valley. 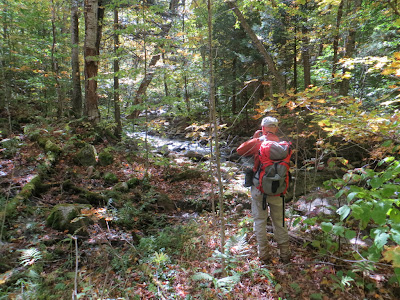 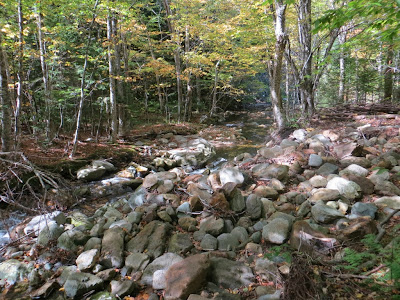 Lots of yellow birch in the lower valley, starting to glow golden overhead. 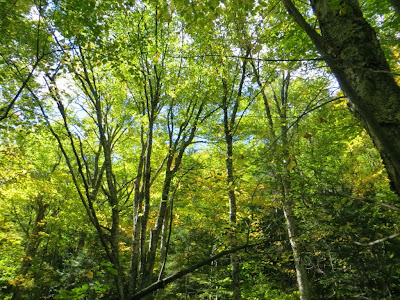 An early cascade, one of several of the sliding variety that we passed by. 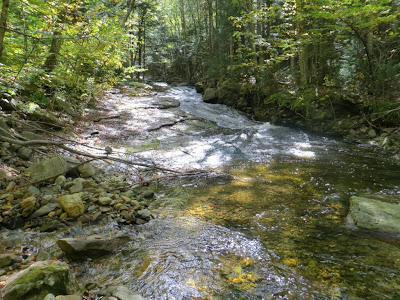 We found this rusted shovel blade near an old logging road. 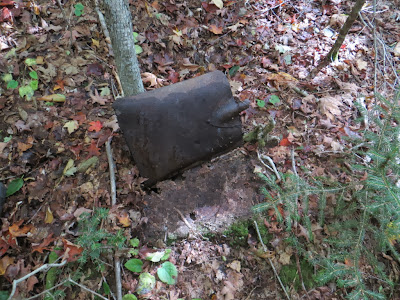 More cascades, deeper in the valley. 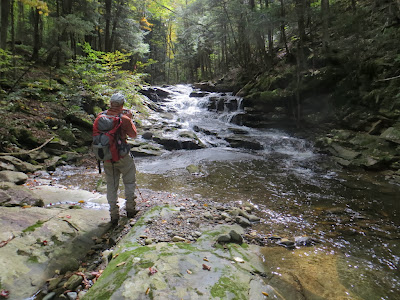 Open hardwoods, with a glimpse of the western ravine wall ahead. 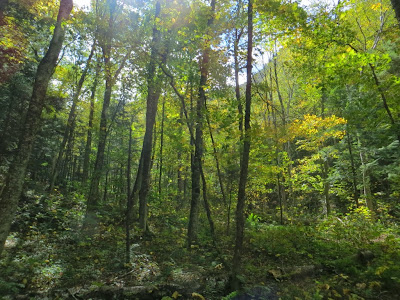 The brook goes ever on.... a lovely valley! 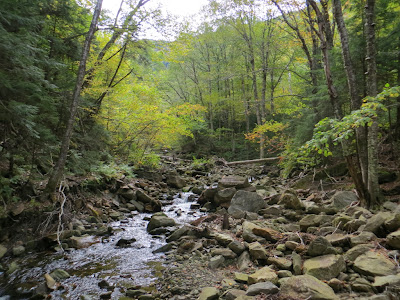 Higher up, the walls of the valley closed in and the terrain got rougher. We went back and forth across the brook to find the best going, sometimes using small "islands" between braids of the stream. 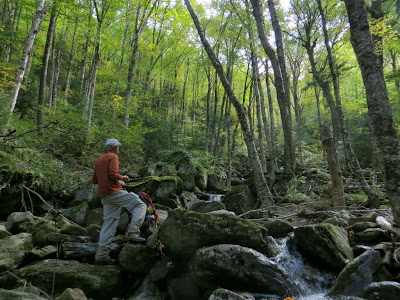 Where the brookbed steepened, the water danced down through the rocks. 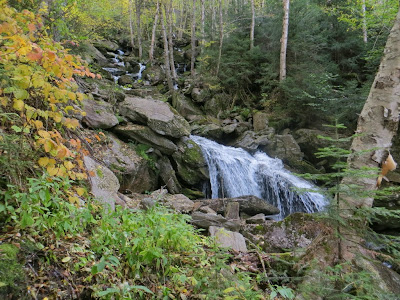 The approach to the big waterfall led through some difficult terrain, steep with lots of rocks and hidden holes. Careful foot placement required. 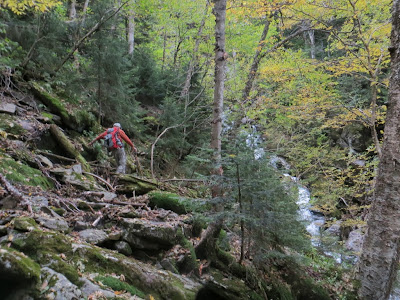 After some maneuvering, we emerged on rocks at the base of the big waterfall, where we could look down on some cascades below... 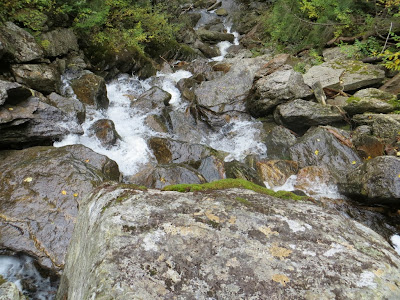 ...and up at the main attraction. 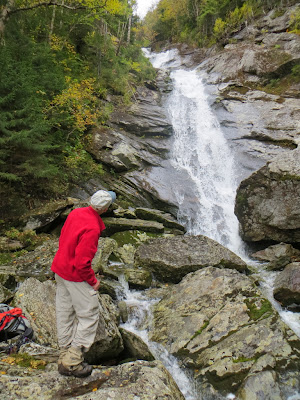 We scrambled across to rocks on the west side for a full view of this impressive waterfall. We guessed it must be close to 100 ft. high. 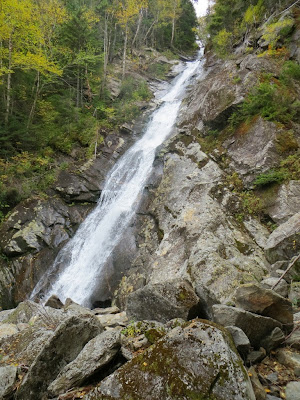 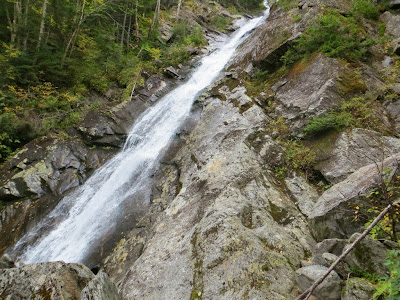 Hanging out on the rocks, with the east wall of the ravine behind. 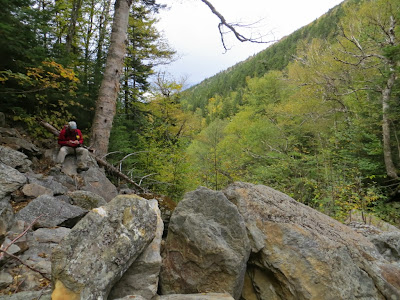 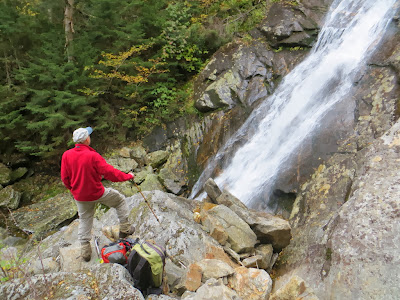 A closer look at the top of the falls. We eyed the ledge perches up there, which would have a distant view to the north, but we had gotten a fairly late start and it would have taken some slow, careful, steep whacking to get up there and back down. We were content with hanging out on the open rocks at the base. 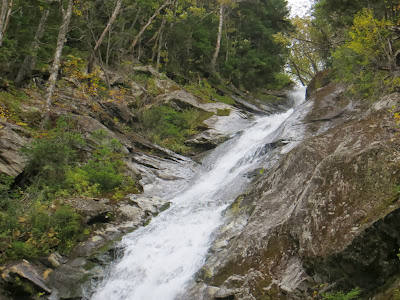 On the way back down, we popped out to the edge of the brook to look at this cascade flowing out from a cave-like formation. 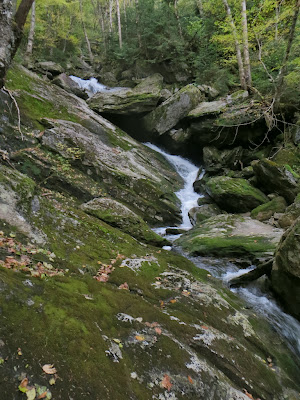 This spot looked familiar, and when I got home it matched up (in location, not quality!) with a photo taken by Eli Burakian that appears on page 57 of his beautiful photographic tribute to Mt. Moosilauke, Moosilauke: Portrait of a Mountain. 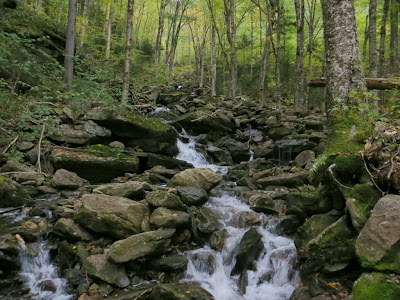 John pauses in a cathedral-like glade of yellow birches overlooking the brook. During our seven-hour journey, Little Tunnel Brook surprised and delighted us again and again. 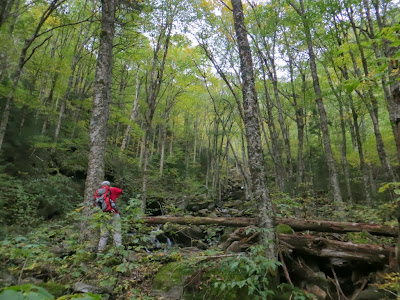