Had the afternoon off and did some off-trail exploring in the middle of the Oliverian Brook valley in the Sandwich Range Wilderness.

Started in on the Oliverian Brook Trail, and at the point where it turns L off a spur grade of the Swift River Logging Railroad, I continued ahead on the overgrown old grade, which continues ahead for another 0.15 mile. Didn't find any artifacts in here. 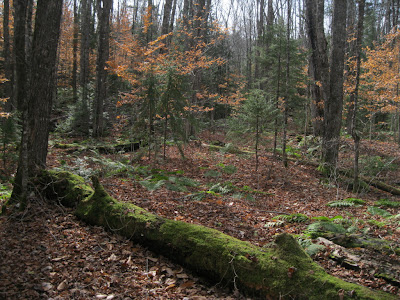 I bushwhacked back to the trail and continued S, entering the Wilderness. 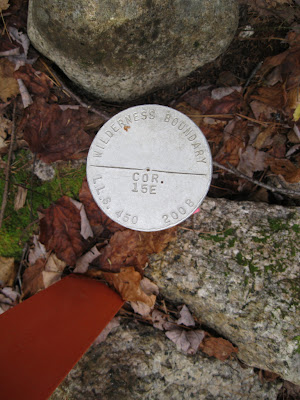 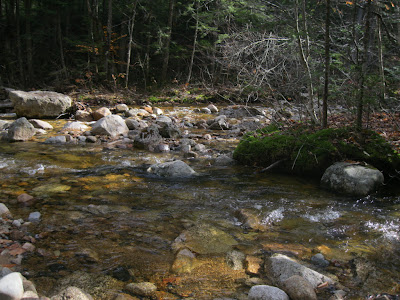 Cascade #1 on the West Branch. 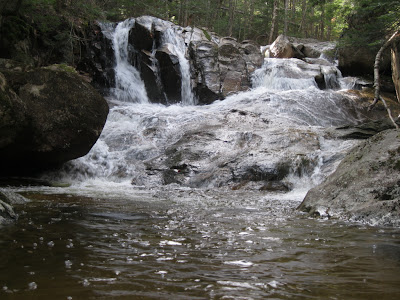 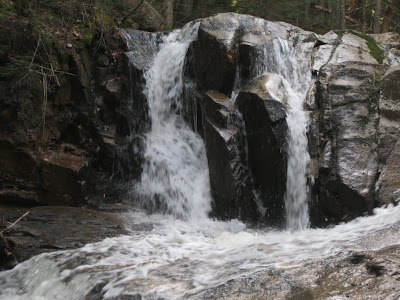 Cascade #2 on West Branch. This long, ledgy drop was a nice surprise. 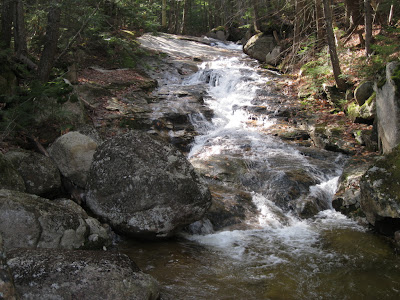 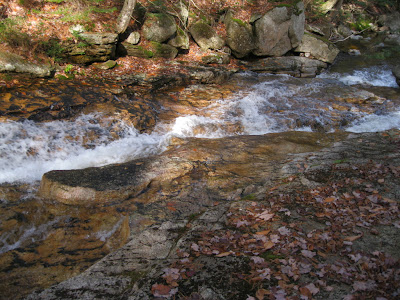 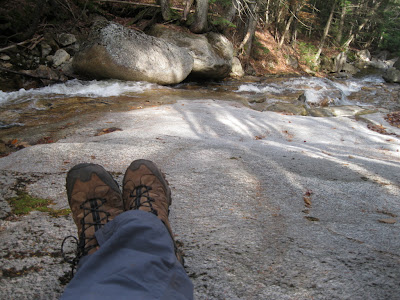 The bushwhacking got a little rougher above here. Farther upstream was this waterslide. 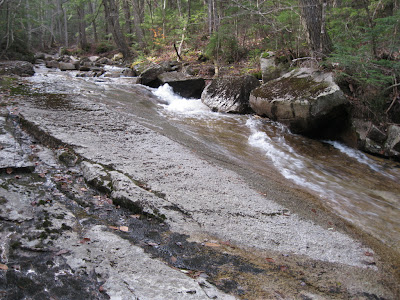 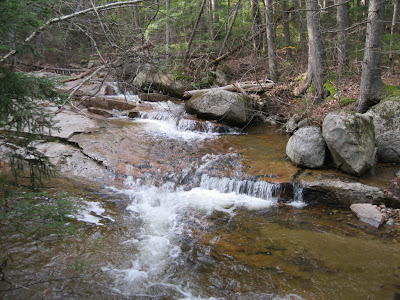 From a steep bank I got a good look at a cascade I had visited last week. 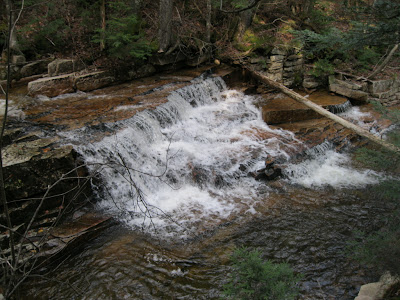 A frontal view of the natural ledge dam on the brook, above the last cascade. 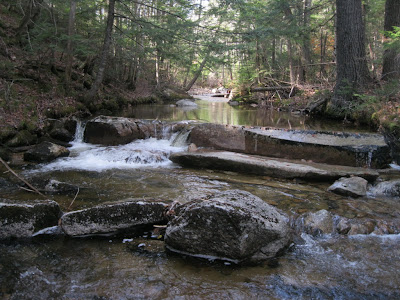 I crossed the Passaconaway Cutoff and continued up along the West Branch, and then a tributary, heading NW. According to the map of the Swift River Railorad in Bill Gove's Logging Railroads of the Saco River Valley, the lower Lambert Camp was located in this vicinity. 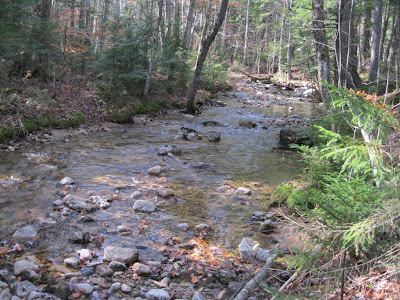 I didn't pinpoint the camp location, but I did find this old bucket left over from the logging days of a century ago. 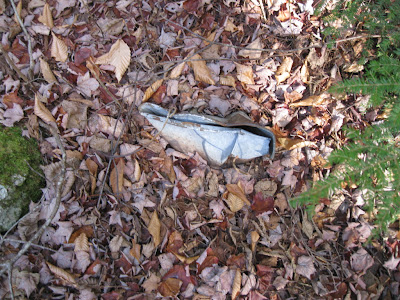 From there I whacked through some fairly thick and confusing rolling terrain to the beaver bog at the foot of Hedgehog Mountain, one of my favorite spots in this area. From the S edge I found a view up to the East Ledges of Hedgehog. 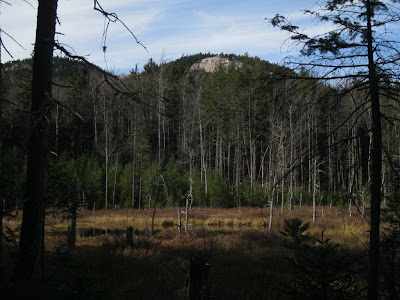 Then I worked around to the NE corner of the bog, where a dry open area provided a fine view of Mt. Passaconaway and a great place to lounge in the sun. It was so warm here that there were a number of non-biting bugs flying around, and a couple of dragonflies were on patrol. 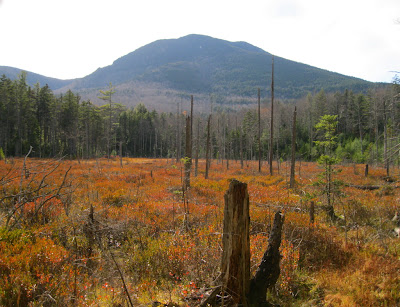 In this return view from the N outlook on Mt. Passaconaway the bog can be seen on the lower R, just above the mountain's shadow. 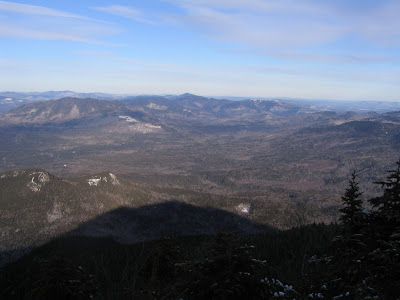 From the NW side of the bog, a view of the distinctive profile of Square Ledge. 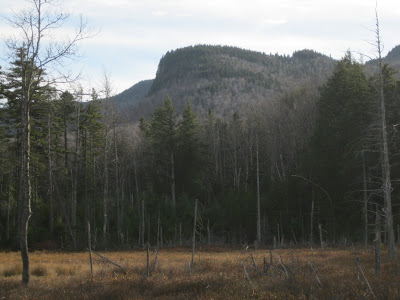 Looking back across the bog. 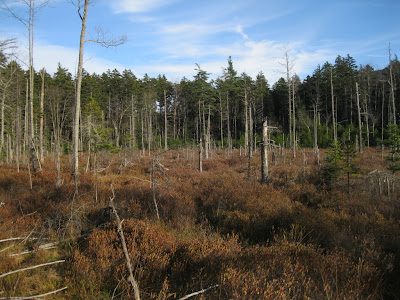 The small inlet stream that feeds the bog. 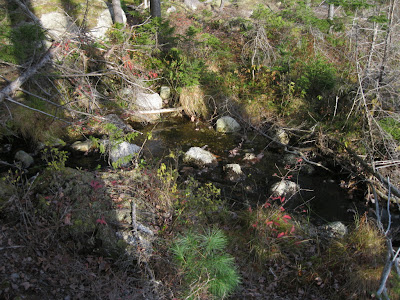 I stayed here til the sun dropped behind Mt. Passaconaway. 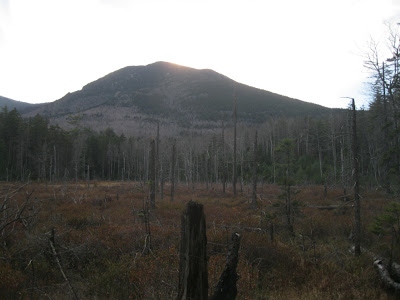 A large hemlock near the bog, on the way back to Passaconaway Cutoff. 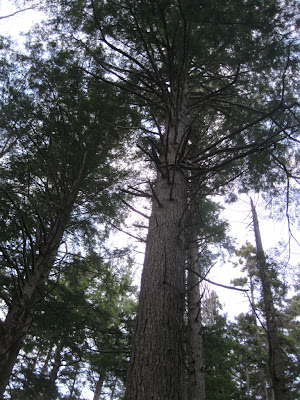 As luck would have it, I emerged on the trail by a stepover blowdown I wanted to take out on the Cutoff. I cut the tree in two places, but unfortunately it was too big and heavy for me to move off the trail by myself, and daylight was waning, so no time to make another cut. We'll haul it off when I have some reinforcements. 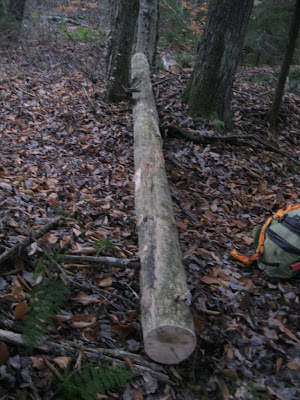