One of my favorite fall walks is the mostly gentle ramble out to Carrigain Notch, the wild backcountry pass between Mt. Lowell and Mt. Carrigain's Vose Spur. Much of the hike leads through colorful leaf-strewn hardwood forest, at its best in October. Along the way I planned to check out three new relocations on the Signal Ridge Trail. With the Sawyer River Road recently reopened after repairs from Irene damage, the time was right for this scenic trek.

Carrigain Notch is prominent in the classic view from Zeacliff. 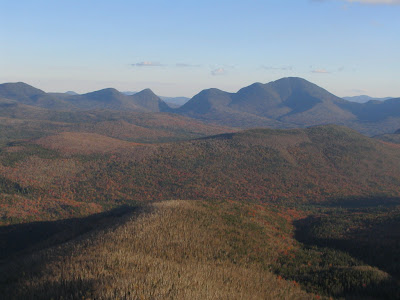 A great close-up view of the cliffs and slides on Mt. Lowell, on the east side of the Notch, is seen from Mt. Carrigain's Signal Ridge, along the Signal Ridge Trail. 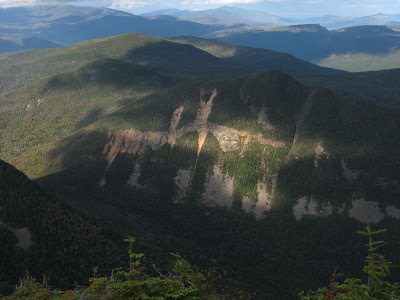 The first relocation is at the start of the Signal Ridge Trail. It now follows a new route on the south side of Whiteface Brook, avoiding a potentially difficult crossing. 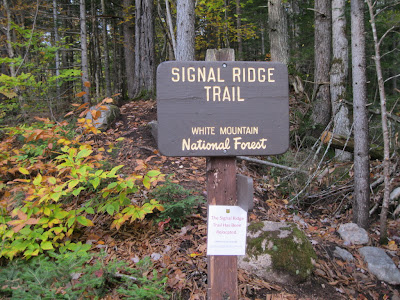 There are some nice hemlocks along this new stretch of trail. 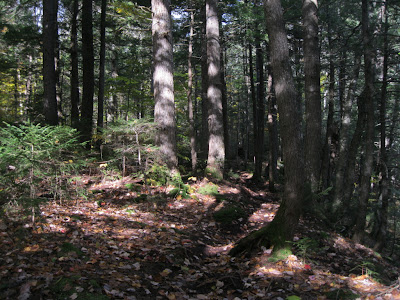 The original section of trail leading along Whiteface Brook is very pleasant. A second relocation goes higher up on the bank to avoid some Irene washouts. 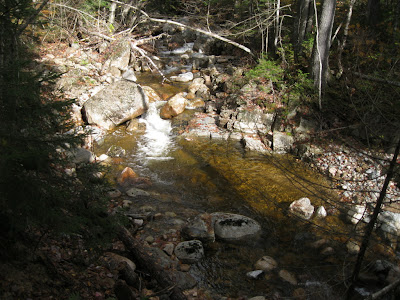 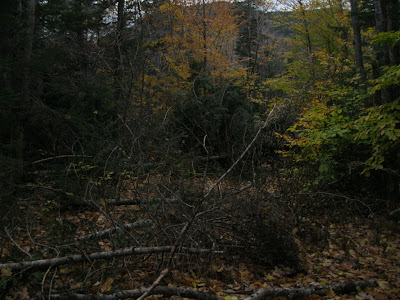 After crossing Carrigain Brook, the trail skirts a large beaver pond/meadow. I made a short bushwhack to the edge of the meadow for a view up to a lower spur of Signal Ridge. A short bushwhack from farther up the Signal Ridge Trail to the cliffs on this spur was an alternate plan for today. But after studying them with binoculars from this vantage point, I thought the terrain up there looked pretty desperate. Maybe another time. 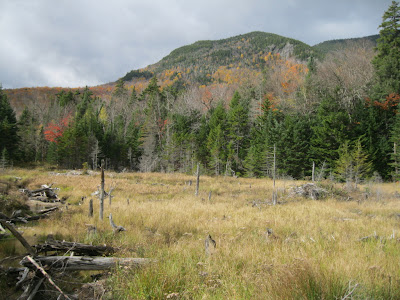 At one muddy spot on the trail, fresh bog bridges were stacked, waiting for placement. 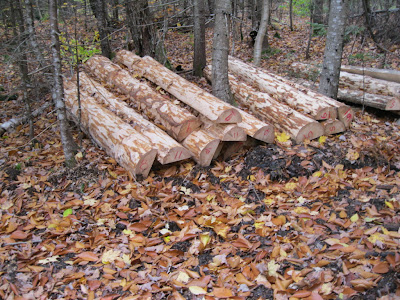 After following the Carrigain Notch Trail for 0.25 mi., the Signal Ridge Trail now turns L onto a new section that climbs up and over a low ridge before returning to the old route in 0.3 mi. This photo shows some nice sidecut work by the Saco Ranger District trail crew where the trail switchbacks up onto the mini-ridge. With this change, the hike to Carrigain via Signal Ridge Trail is now 5.3 mi., 0.3 mi. longer than before. 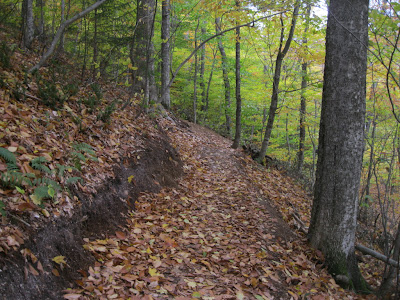 After checking out the new section, I retraced my steps and headed north up the Carrigain Notch Trail. The next mile is a wonderful stroll through colorful, leaf-carpeted hardwood forest in a beautiful, remote valley. 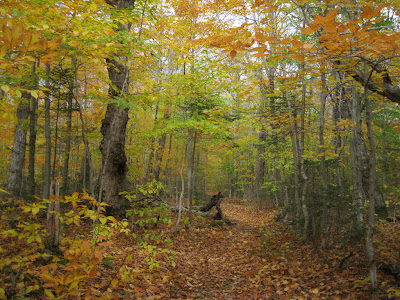 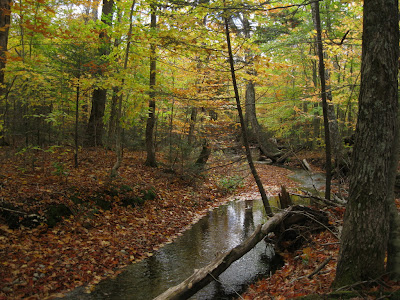 October glory in the backcountry. 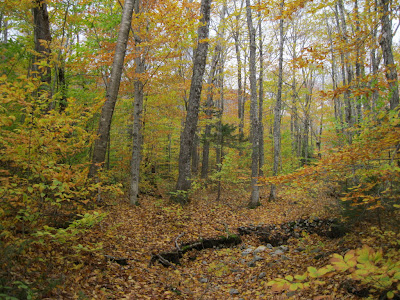 Farther up the valley you come by Carrigain Brook again, at a spot where a small sandbar... 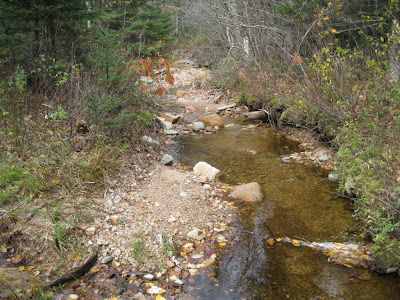 ...gives you a peek up at the forbidding face of Vose Spur. 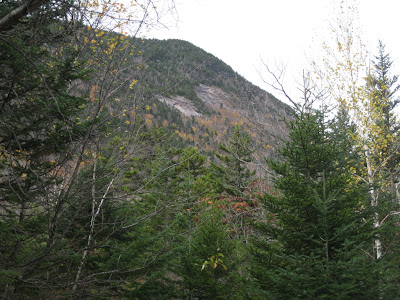 Just beyond is a boulder where many Hundred Highest peakbaggers launch their climb up Vose. The first time I climbed Vose my friend Bill and I ascended directly from the height-of-land in Carrigain Notch - not recommended! 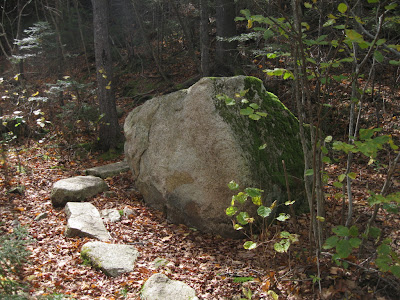 After a steady half-mile climb, the trail levels off near the top of the notch and enters the Pemi Wilderness. The wind was howling up here on this crisp, cool day, adding to the wild aura of the place. 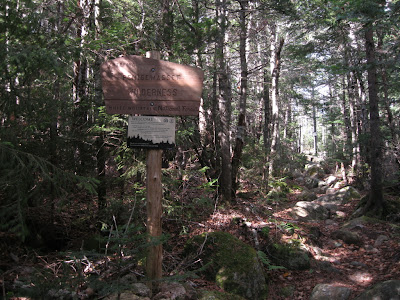 I headed off-trail and descended a short, steep pitch through dense woods to the floor of the Notch, catching this view up to the cliffs of Mt. Lowell. 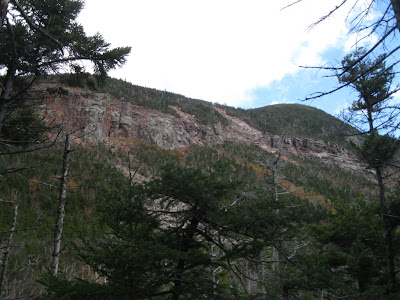 I re-visited a small pool of water on the floor. Ever since first coming upon this years ago, I've wondered if this is the "Wild Duck Pond" mentioned in 1920s AMC White Mountain Guides as a good camping spot near the top of the notch. (Not to be confused with Duck Pond between Mts. Lowell and Anderson). 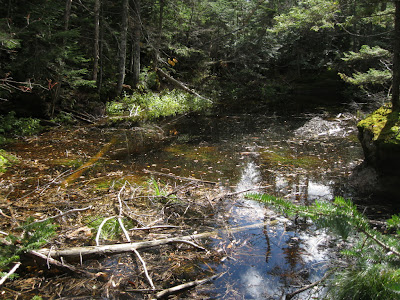 There are at least seven talus slopes strung along the base of Mt. Lowell's steep western face. Years ago I visited one of these, but even though the whack to it was not lengthy, the footing was treacherous due to the big unstable rocks and numerous dangerous holes. This trip I aimed for a gravelly slide to the N of all the talus slopes. As hoped, this provided a safer bushwhack, though it was thick enough, and the steep, loose gravel was somewhat difficult to climb. From the lower part of the slide, which was as far as I went, there was a view up to the red-tinted cliffs, which perhaps gave Lowell its previous name of Brickhouse Mountain. The name Mt. Lowell honors Abner Lowell, the president of the White Mountain Club of Portland, ME, which specialized in exploring the Carrigain region in the 1870s. Vose Spur was named for George L. Vose, another prominent member of this short-lived club. 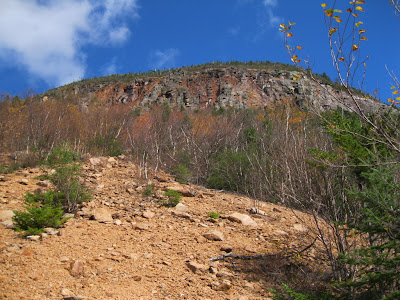 From the slide, under partly sunny skies, I enjoyed some interesting views, including this look at the Bond-Twin Range in the Pemi Wilderness. 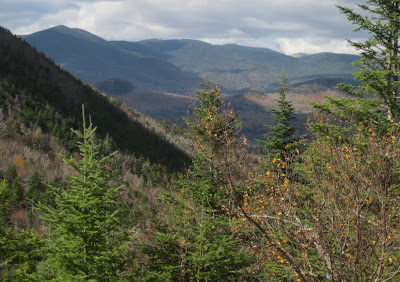 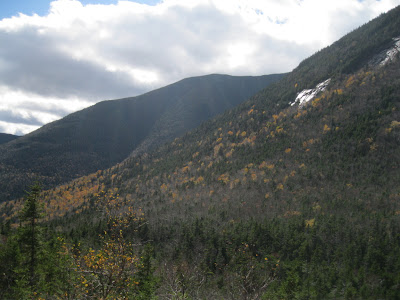 Far to the south, beyond spurs of Signal Ridge, were the graceful peaks of Passaconaway and Whiteface. 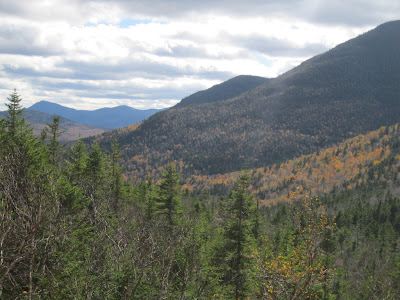 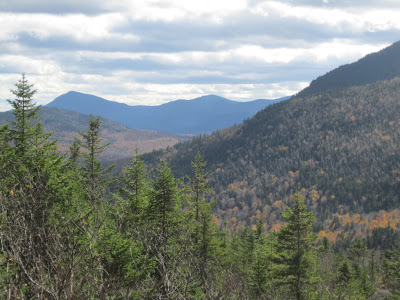 Directly across the Notch towered the grim mass of Vose Spur. The summit is hidden behind this eastern shoulder. 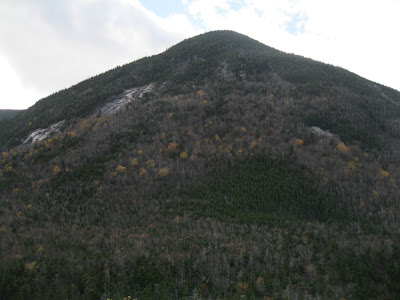 The obligatory boot shot, looking down at the floor of the Notch. 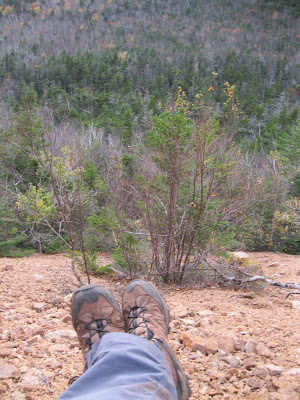 Typical woods on the floor of the Notch, as I returned to the trail. 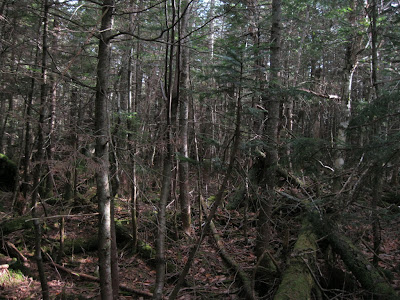 Just north of the height-of-land, the trail offers this look across at the slide. 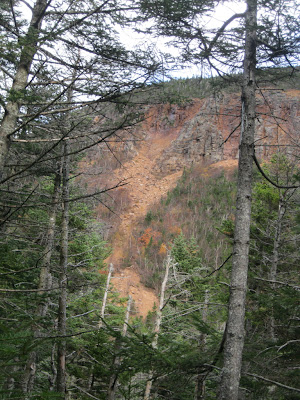 Descending southward from the Notch, the trees open for a look at "The Chute" on Mt. Lowell. Several riveting trip reports of ascents through this gully can be found on the web. Yikes! 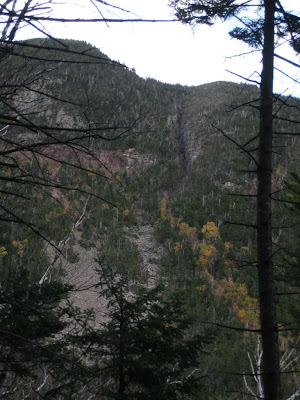 One of several neat dry, stony brookbeds crossed by the Carrigain Notch Trail. 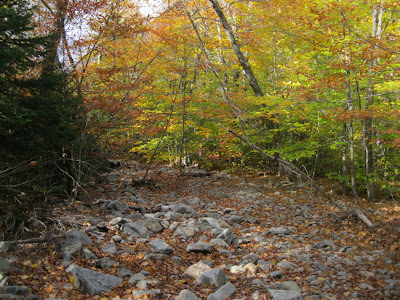 A stalwart maple along the trail. A fall walk out to the Notch is highly recommended! 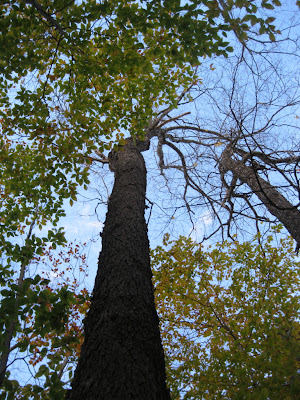