TURN OF THE SEASON HIKES

Two trail maintenance trips and a morning walk as summer turns to fall, and early foliage colors begin to pop out.

A paint blazing trip on the UNH Trail, with time left to enjoy the views on a spectacular clear day.
After finishing the up-bound blazing, I took a long break on a favorite view ledge just west of and below the summit. This spot has a great view of the Sleepers and Tripyramids rising beyond the Downes Brook valley - a look into the heart of the Sandwich Range Wilderness. 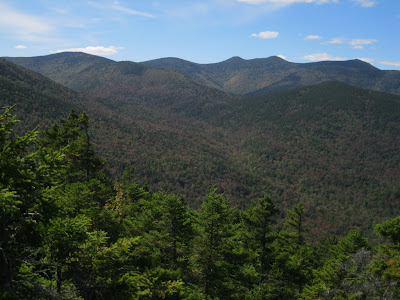 A zoom on the Tripyramids, showing a blush of orange from high elevation sugar maples. 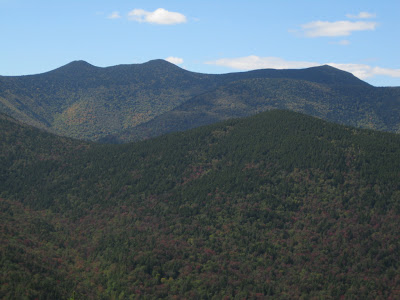 Peering north to the Hancocks, The Captain, Mt. Carrigain and Green's Cliff. Bond, Guyot and South Twin peek over behind The Captain. 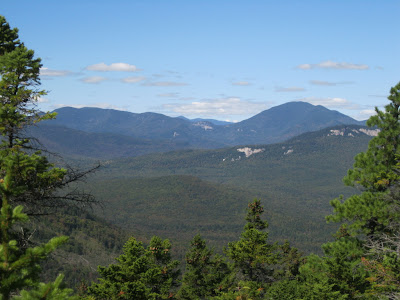 Nice spot to hang out. 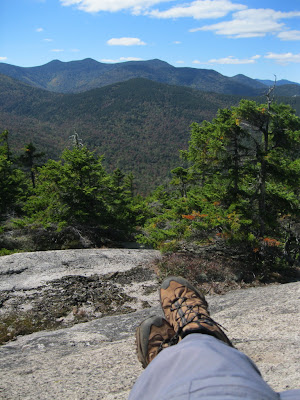 From another ledge near the summit, the massive and mighty Passaconaway. 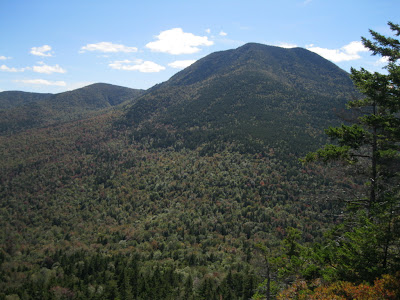 Looking over the broad Oliverian Brook valley to Paugus Pass. 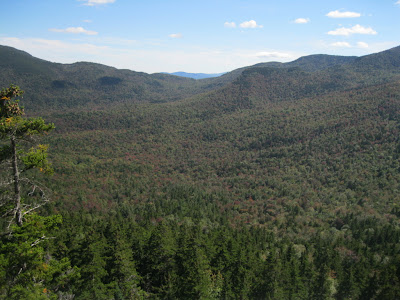 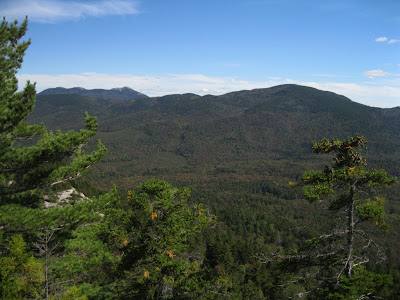 From ledges along the trail, north of the summit: Mt. Washington, Boott Spur, Giant Stairs and Mt. Resolution are seen beyond Mt. Tremont and Owl's Cliff. 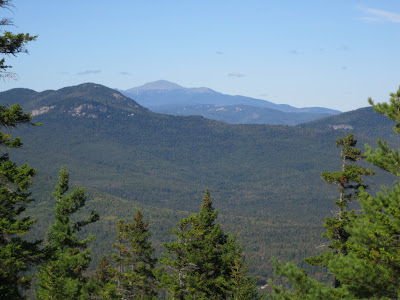 A quick morning walk along a Loon Mountain X-C trail (within the WMNF; limited parking on private land). At one spot Mt. Moosilauke and its satellite peaks are seen far off to the west. 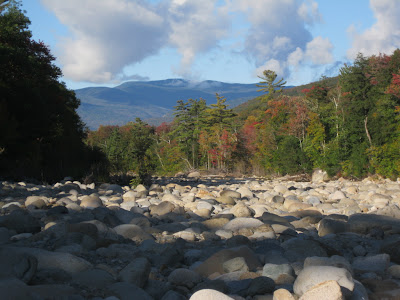 Potash Knob (with the cliffs) and East Whaleback. 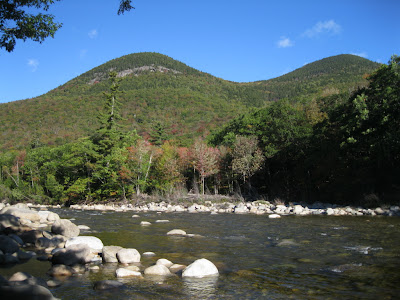 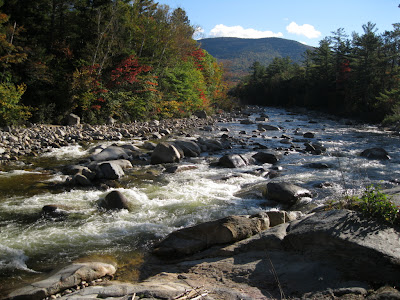 Downstream to Potash Knob, with Big Coolidge in the back. 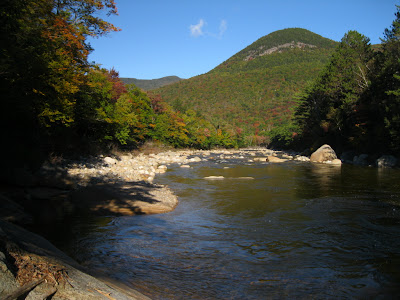 I had heard there were some blowdowns on Pine Island Trail after a rain and wind storm on 9/18 (thanks, Atha!), so I took a half-day off to head out and remove what I could with my Sven saw and folding saw. It was another beautiful, sunny morning. The photo below shows one of the newly relocated sections of Pine Island Trail, replacing part of the trail that was obliterated by the East Branch during Tropical Storm Irene. This was cut and blazed in July by the Pemi District trail crew and volunteers. 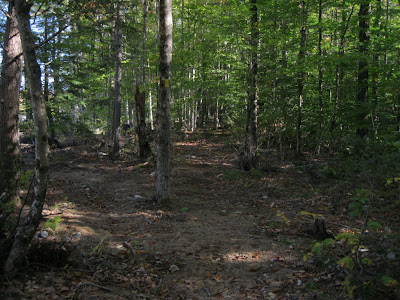 One of a dozen blowdowns that I removed. There was only one large enough to require a chainsaw or axe, which I left for the trail crew; many were small enough to be dragged off. 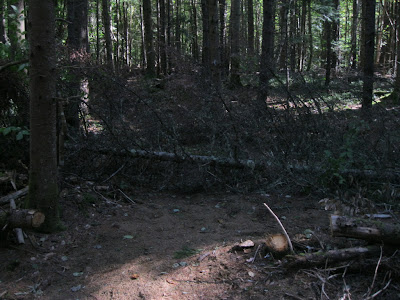 Towards the north end of the trail, Irene opened up a view to the distant peaks of Owl's Head. Caution should be used if venturing near the riverbank, which is severely undercut in places. 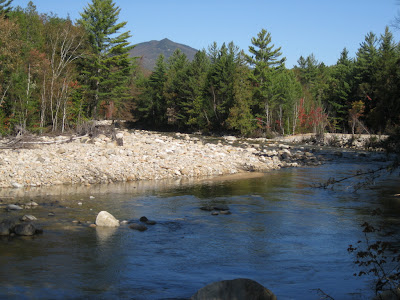 A view of a nameless 2675-ft. peak across the river. There are a couple of view ledges near the top of this peak, but the bushwhacking is gnarly. 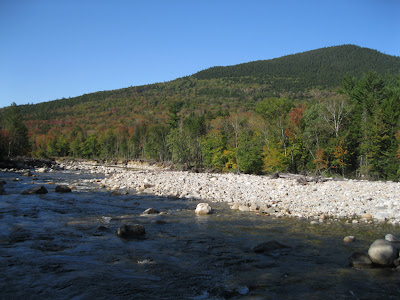 Near the north end of Pine Island Trail, Irene created a remarkable beach beside the river. 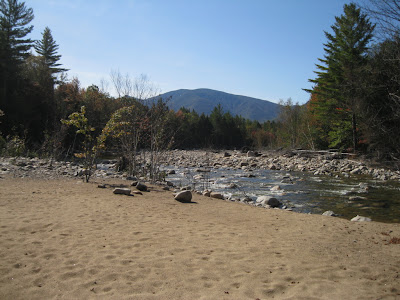 Nice place to lounge in the sun, with Scar Ridge in the distance. 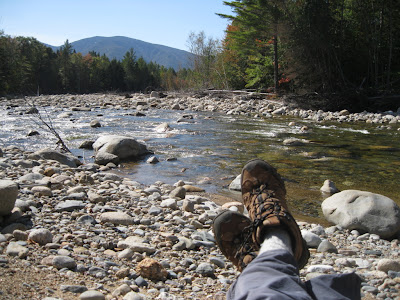 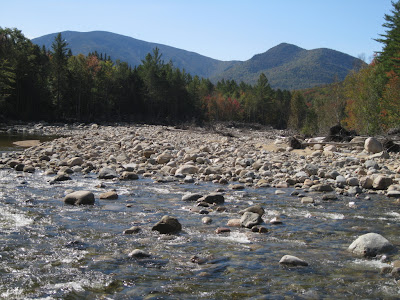 Red maples at "The Beach." 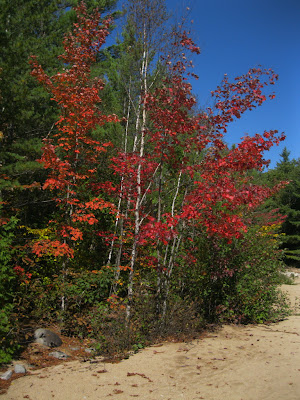 After a lunch break, I wandered north along the East Branch, at first along a big rocky outwash with a view of Mt. Flume. 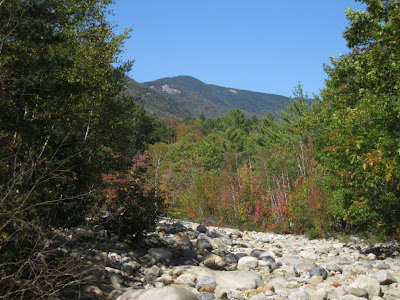 Whaleback Mountain (on the L) and its ledgy spurs. 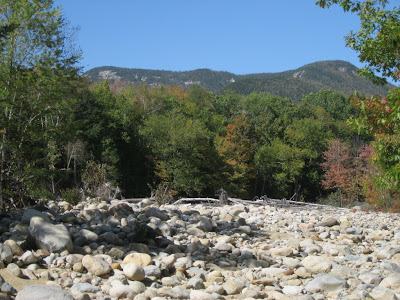 Looking back at the West Peak of Mt. Hitchcock. 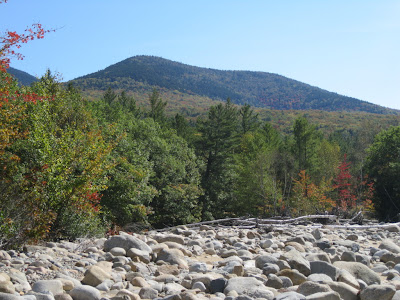 Farther upstream, I had a peek at the SE cliffs of Owl's Head, one of the neatest spots in the Pemi Wilderness. 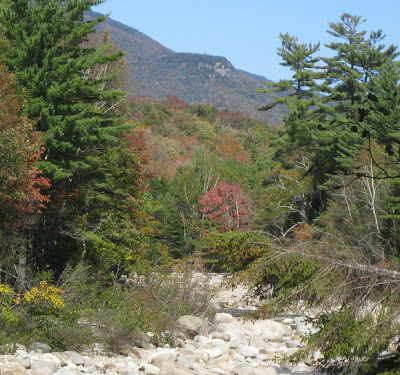 Then I found a rock with a long view up the river to Owl's Head itself, with the sharp south peak especially prominent. 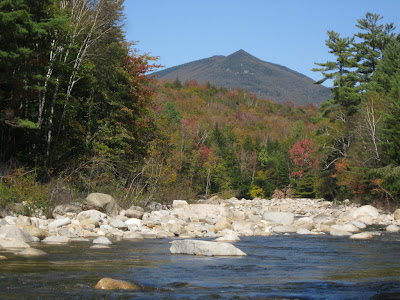 Continuing north through open woods and along the river, I came upon this fine vista of West Bond and Bondcliff, with Henry's Ledge below. 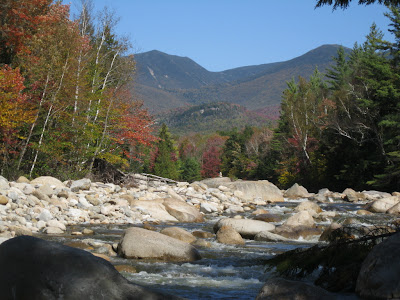 And then a more sweeping view of West Bond. 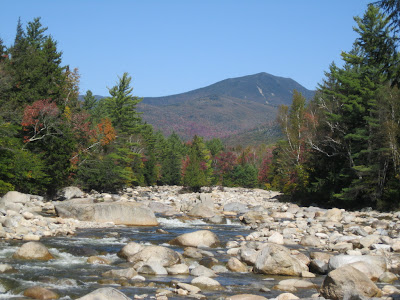 I headed back downstream through open hardwoods. 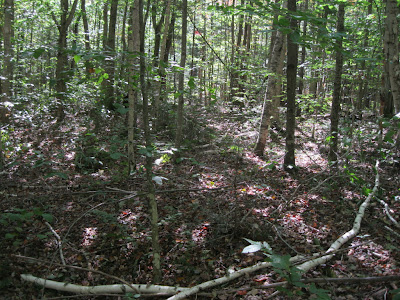 Back on Pine island Trail, a view north to distant South Twin. This river offers an amazing variety of views! 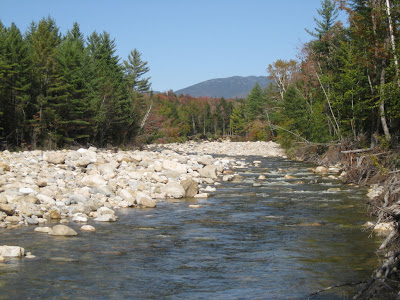