The plan for today was to check out the new relocation made on the Gorge Brook Trail on Mt. Moosilauke by the Dartmouth Outing Club (bypassing a section washed out by Tropical Storm Irene), then bushwhack over to the Gorge Brook Slide (the route of a long-abandoned DOC trail) and climb up it for some views. With Dartmouth freshman orientation completed, there were only a few cars parked along Ravine Lodge Rd. I always get a kick out of this warning sign in the cul-de-sac at the end of the road. 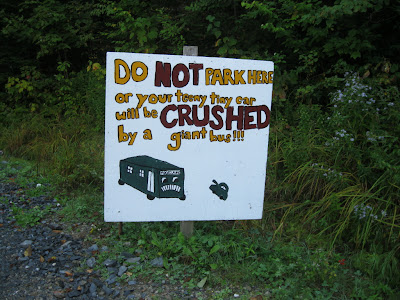 I dropped down the first part of Gorge Brook Trail to cross the Baker River on this sturdy bridge. 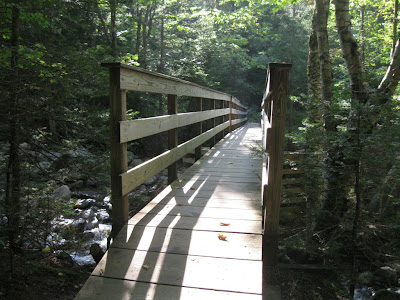 The view downstream was impeded by trees toppled by Tropical Storm Irene. 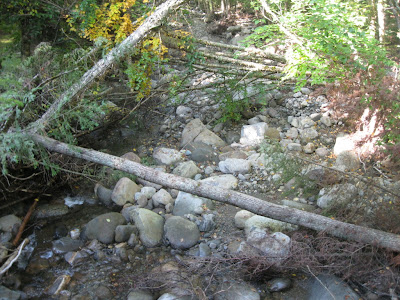 From the river I climbed up a rocky section of the trail to the first crossing of Gorge Brook, also on a bridge. On the far side, a sign told the story of Irene washouts on the old route of the trail. The new relo starts a little ways up the Snapper Trail, a change from the original plan last fall that had Gorge Brook Trail following a relocation staying on the east side of the brook (which is how it appears in the 29th edition of the AMC White Mountain Guide, mea culpa). 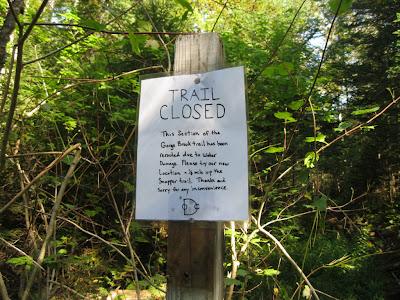 New signs mark the start of the relo 0.15 mi. up the Snapper Trail. 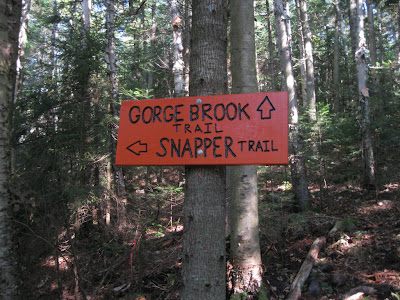 A tribute to the trail crew who built the relo. 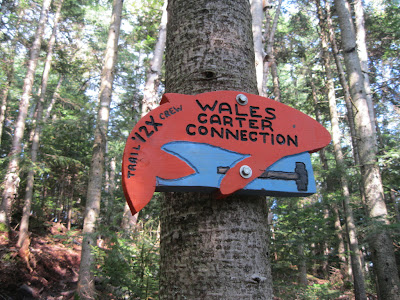 The new section is 0.35 mi. long and climbs at easy grades through open woods. 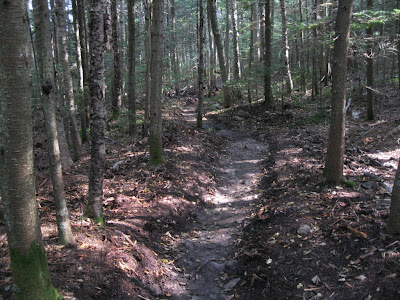 I took a break at "Last Sure Water," where Gorge Brook Trail makes a R turn onto a major relocation made in 1990-91. 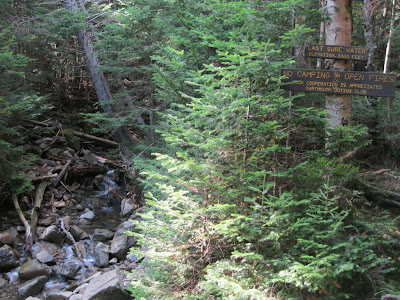 This area is named after a DOC icon. 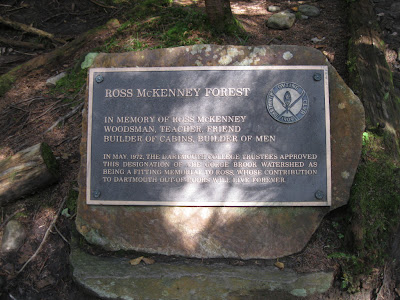 I crossed the brook and searched around in the woods a bit for the bottom of the slide, and eventually found it. In 1966 DOC opened the Gorge Brook Slide Trail up this major slide, which fell in a 1927 deluge. It was "intended to be used in only one direction - uphill." It was abandoned in 1980, though parts - but not all - of the trail can still be found and followed. Its extreme steepness and sometimes obscure route make it suitable for experienced off-trail hikers only. The lower part climbs up a steep swath of sometimes loose rocks. 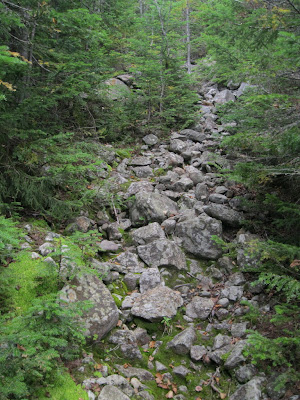 There are several tricky spots that must be negotiated. An old DOC blaze is visible on this nasty wet slab, which I skirted on the R. 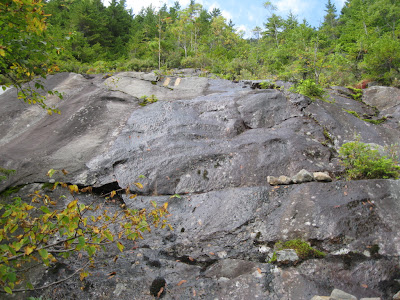 Farther up, I had my first views out over the lower Gorge Brook valley to the Blue Ridge, including Sayre Peak, Mt. Kirkham and Mt. Braley, all named for DOC notables. 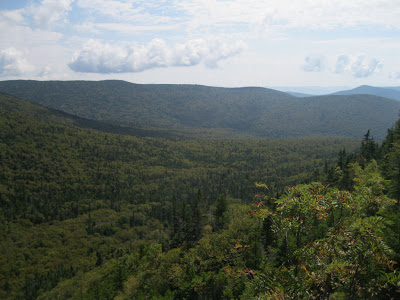 The middle part of the slide is more open, with loose broken rock. 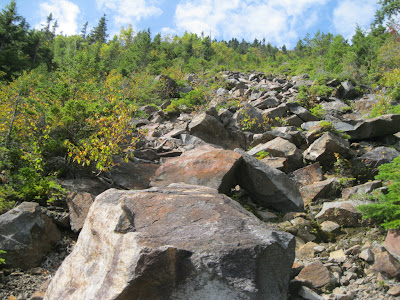 Looking down, it seems steep enough! 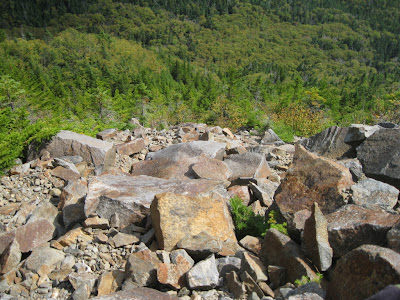 Looking up at the East Peak of Moosilauke. 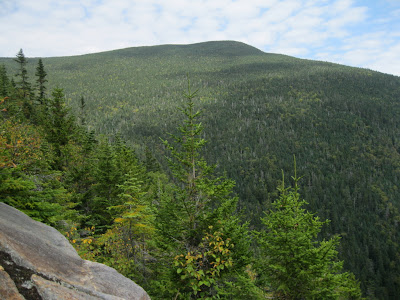 The easterly view expands near the upper end of the slide, with such peaks as Tripyramid, Tecumseh, Whiteface, Sandwich Dome, Mt. Israel, the Ossipees, the Squam Range and the Belknap Range visible in the distance. In the foreground, the Gorge Brook valley is expansive where it meets the Baker River valley. 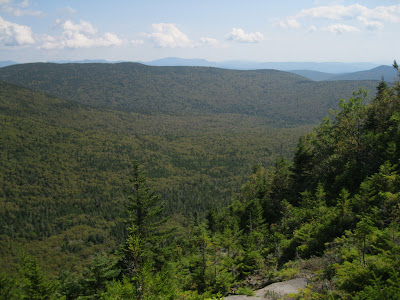 A couple of Black Hawk helicopters circled around for a while, apparently on a training mission. 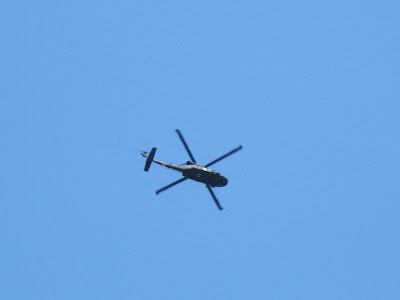 Hovering over the East Peak. 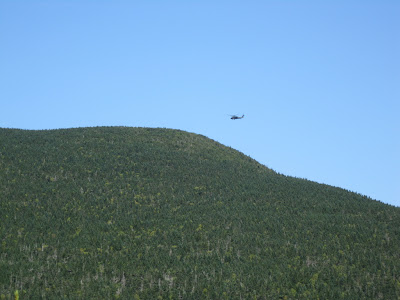 I found a fairly level spot suitable for relaxing and even snoozing. I'd been up or down the slide
several times over the years on longer Moosilauke hikes, but on this day of hazy views the slide was the destination. After spending a couple of hours at various spots on the slide, I made a very slow and careful descent, especially at spots like this. 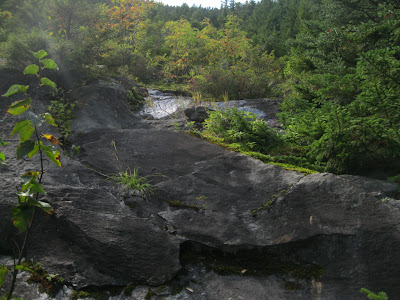 Looking upstream along Gorge Brook at the point where I crossed it on my descent. 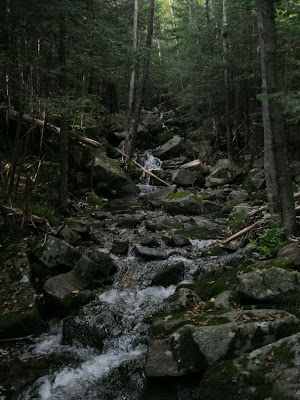 The last time I went up the Gorge Brook Slide, in 2007, I first made a steep, thick bushwhack upstream along Gorge Brook to one of the cascades known as the Pleiades. 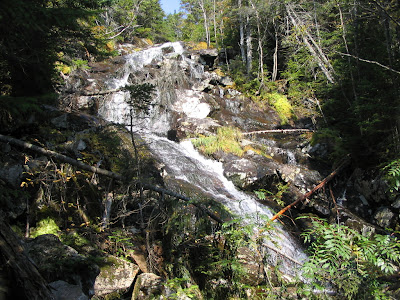 At the brink of this waterfall was a ledge with a view out over the valley. Neat spot. In 1880 Thomas Wentworth Higginson wrote an interesting article about "A Search for the Pleiades." 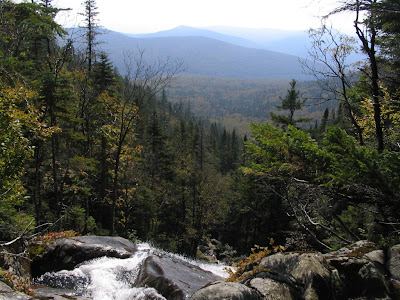 On my way down, I made the short side trip to the "Class of '97 Swimming Hole" on the Baker River. Perhaps due to rearrangement by Irene, it looks more like a "Wading Hole" now. 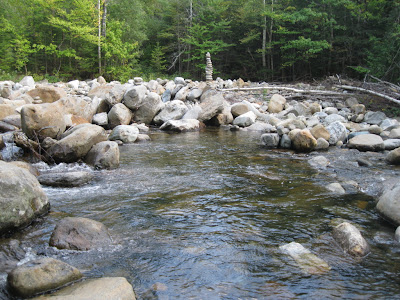 I also checked out the lower part of the Ridge Trail along the river, which was closed by DOC due to a major Irene washout. 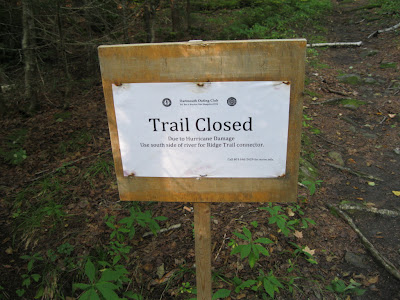 I found the washout and blowdown mess 0.2 mi. up the trail. Yikes! 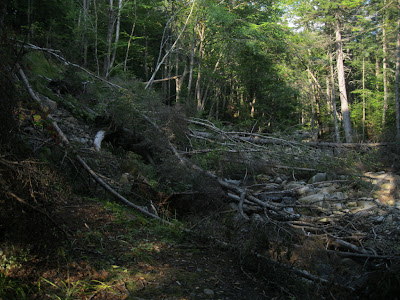 It's always fun to walk up past Dartmouth's Moosilauke Ravine Lodge. The place was quiet today, though a sign said it was closed for a private function. 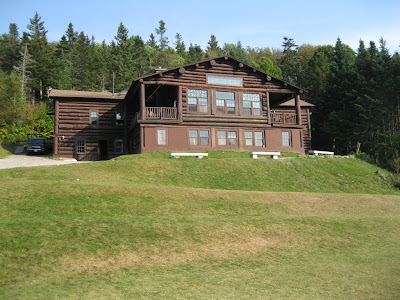 From the front of the Lodge the view takes in the South and East Peaks of Moosilauke. From here it was a short walk back up to the car. 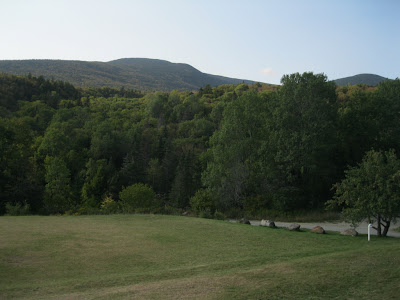