When we don't go away for a holiday, Carol and I traditionally do an afternoon hike, which often ends up being one of our favorite short-trip destinations, The Scaur in Waterville Valley. This was a big day for Carol, for it was the first time she tested her knee out on some steep terrain since her surgery a little more than a year ago. The hike to The Scaur via Livermore Trail, Kettles Path and Scaur Trail has only 650 ft. of elevation gain, but it comes in some short, steep bursts.

The weather was uninviting as we set off - gloomy gray skies, 39 degrees, windy with flurries. It's been a chilly spring ever since the weird late March heat wave. To our surprise, there was still quite a bit of old ice in places on the Livermore Trail. 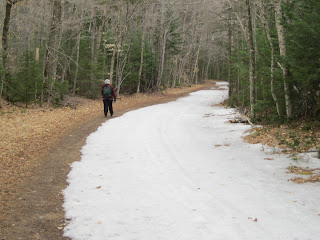 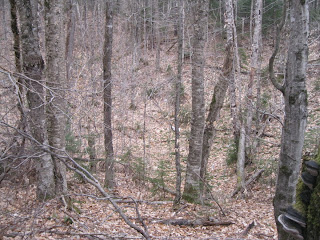 The Kettles Path is a delightful meander through a mix of conifer and hardwood forest, with a couple of short, steep pitches. Carol, who was ahead of me, heard some coyotes yipping in the distance. 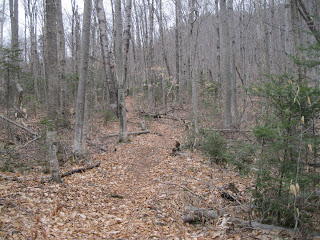 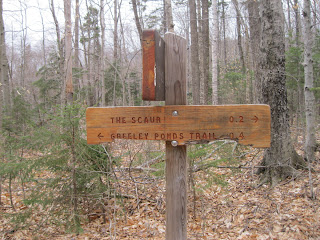 Heading up towards The Scaur. 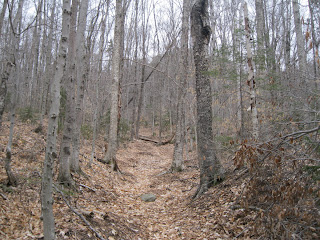 Carol's knee performed admirably, and she had a smooth climb up the final steep pitch on the north side of The Scaur. Here she pauses while scrambling up the ledgy slot at the top of the pitch. 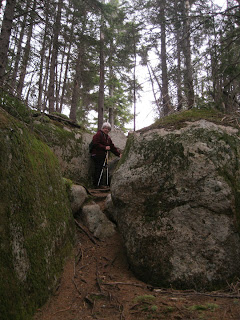 Atop The Scaur, and feelin' good! 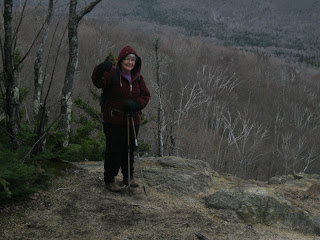 Taking in the view south towards Sandwich Dome. As is often the case, the ledges here were protected from the wind, and we were able to have a comfortable sit-down lunch break. 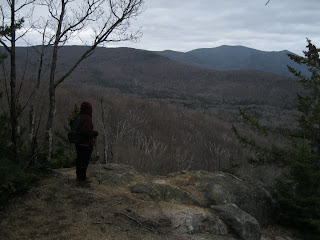 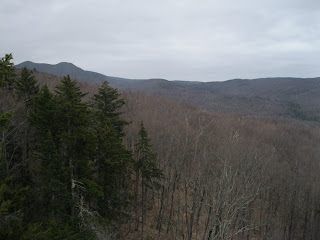 Looking down at some beautiful Catskill-like hardwoods at the base of the ledges. 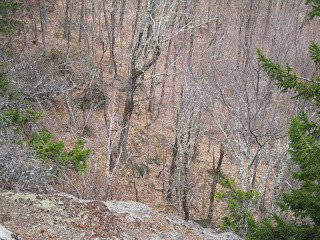 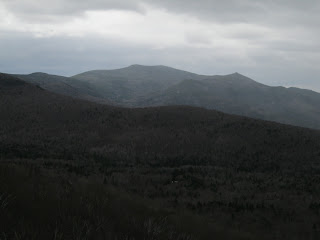 Descending was another test for Carol's knee, and she passed with flying colors. 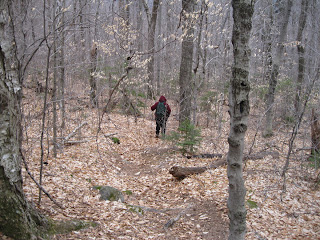 Ledge wall on the west side of The Scaur. 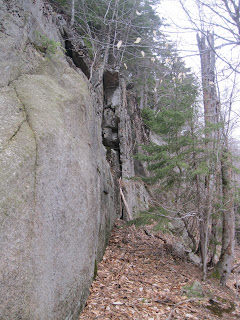 Near the Kettles-Scaur junction, this old yellow birch has a firm grip on a chunk of stone. As we descended from here, we heard the deep hooting of a barred owl off to the east. Despite the cold and rather dreary weather, it turned out to be a fine early spring hike, and a milestone in Carol's knee recovery. Congratulations!! 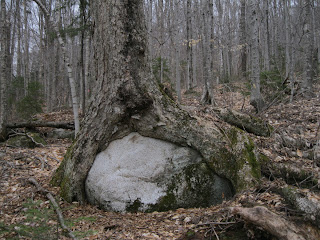