This day was one of the picks of the winter: sunny, 30s, with light winds. A fine day to head in to an old favorite, the Greeley Ponds in Mad River Notch between East Osceola and Mt. Kancamagus.

There were a half-dozen cars in the small parking lot when I set out late morning, but most of those folks must have been doing the Osceolas, as I saw only one group of four on my trek to the ponds. 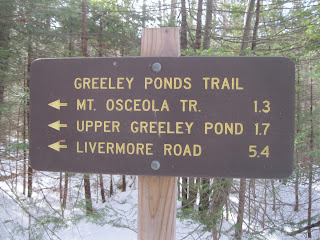 Normal for this winter, the trail was a packed sidewalk, ideal for Microspikes. It makes for a more pleasant hike than the muddy, rocky, rooty footing found on parts of this trail in summer. 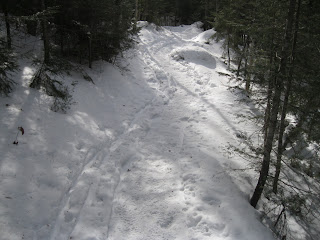 Some nice old hardwoods on the final approach to the height of land in Mad River Notch. 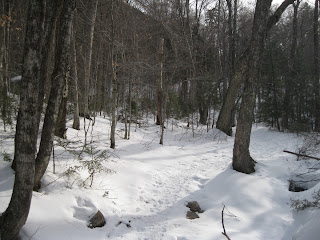 The trail junction in the notch. 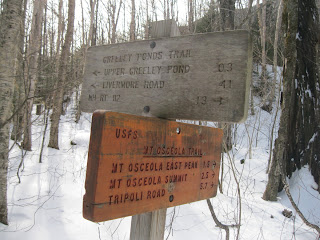 The peakbagger's pathway towards East Osceola. The majority of the boot traffic had headed this way. 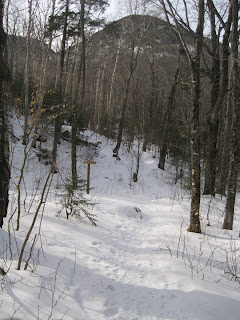 Midday sun floods the woods at the height-of-land. Cool fortress rock beside the trail. 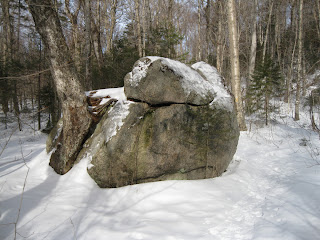 A single log foot bridge spans the infant Mad River. Hard to imagine that just a few miles south, down towards Waterville Valley, this stream devastated a long section of the Greeley Ponds Trail, which remains closed and will require major reconstruction/relocation before it reopens. 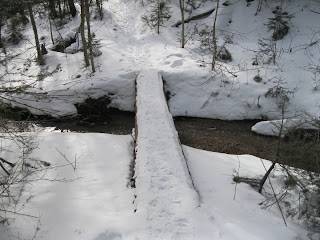 The trail hugs a high bank above the west shore of Upper Greeley Pond. 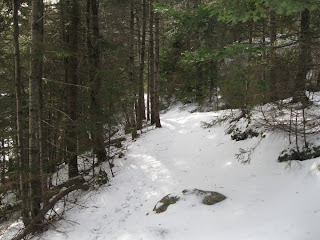 First view of the pond through a gap in the trees. 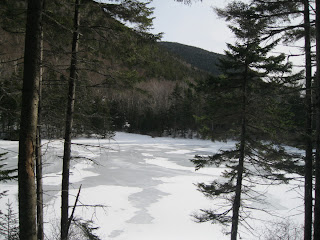 From the SW corner of Upper Pond, near the outlet, there's a neat view up to the ice-draped ledges on the western knob of Mt. Kancamagus. 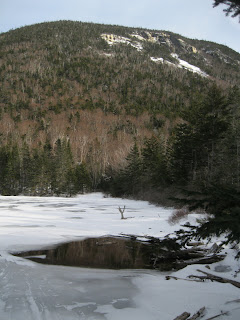 The best view at Upper Pond is found along an overgrown side path that leads left from here and crosses the outlet brook. Surprisingly, no one had headed this way recently. 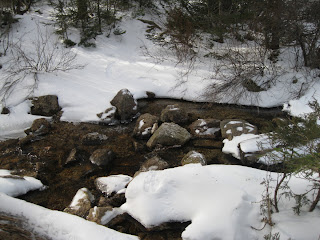 From an opening on the SE shore there's an impressive look at the long line of cliffs fronting a northern arm of East Osceola. Peregrine falcons sometimes nest here. 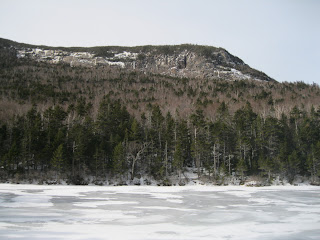 Looking north down the pond, the rock-faced western spur of Mt. Huntington peers over the trees. Although I've crossed the ice on Upper Greeley many times in the past, I stayed off it today with a recent rain/thaw event in the back of my mind. 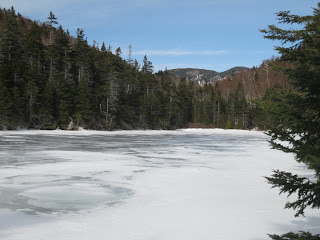 I especially like the view up towards the top of East Osceola. The two slides on the L are sometimes descended by hardcore backcountry skiers. The small slide patch that the Mt. Osceola Trail crosses high up on the mountain is on the R, directly above the prominent snowy ledge. 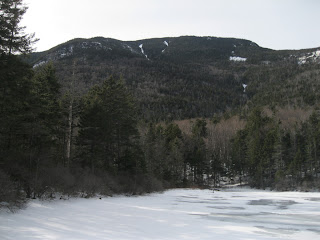 Here is the view back down to the ponds and notch from that slide patch. 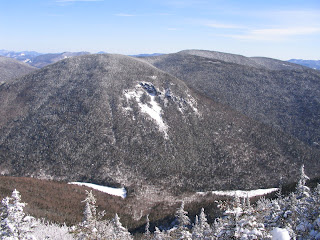 Returning to the main trail, I continued down to Lower Greeley Pond, an easy half-mile of gentle descent. Along the way you pass this brook, the runout from one of the East Osceola slides. 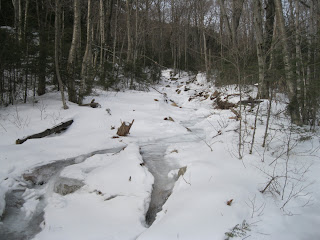 Tracks leading off through the woods - coyote? 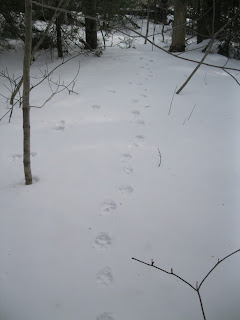 My favorite spot in Mad River Notch is the viewpoint on the NW shore of Lower Greeley Pond. This pond is more open and expansive than Upper Greeley, and is very shallow with suspect hollow ice at its north end. The K1 Cliff, named by early 1900s Waterville hikers, is located on this southern spur of Mt. Kancamagus, where it drops off on the R. For a few years there was a primitive path up to the cliff. A few years ago I tried to get down to the cliff from the top of the ridge, but the terrain was too steep and rough on snowshoes. 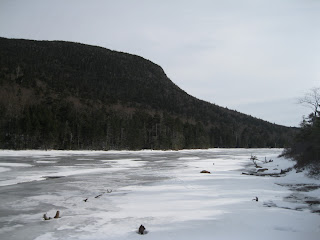 I did, however, get a good view up to the K1 Cliff from a remarkable ledge that juts above the trees on the flank of the mountain. 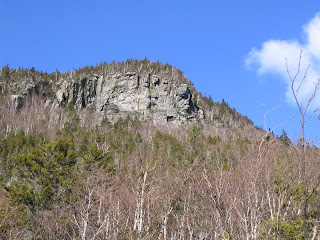 Another look at the western knob of Mt. Kancamagus from the shore of Lower Greeley. 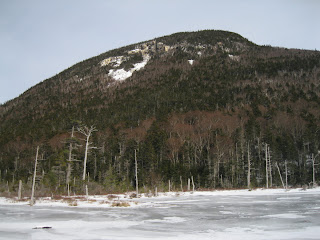 This was called the K2 cliff by the Watervillians, and for a few years there was also a rough path up there. Must have been quite the rugged route! 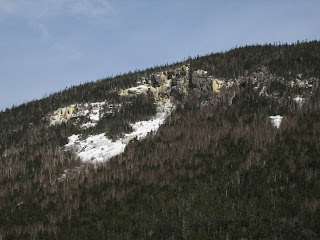 The skeletons of ghost-trees rise from the bog at the north end of Lower Greeley. 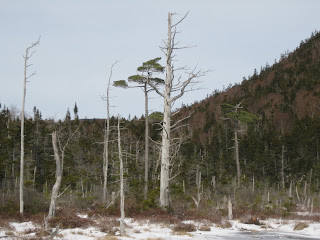 I continued down to the viewpoint at the SW corner of Lower Greeley, where a long view north up the pond places Mad River Notch in profile. 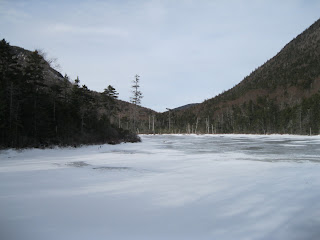 I had lugged my snowshoes, and put them on for a while, skirting around the shore. 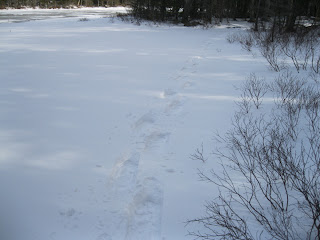 Heading back up the trail between the ponds. 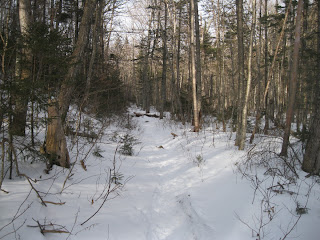 A great gnarled old yellow birch crown. There are some old trees in this inner sanctum. When a logging railroad was planned through the notch in the 1920s, the Society for the Protection of NH Forests spearheaded a campaign to protect the area, and it was acquired by the Forest Service in 1928, with a 770-acre tract around the Greeley Ponds set aside as a permanent scenic reserve. Today the area is known as the Greeley Ponds Scenic Area, and it is a place I like to return to often, winter and summer. 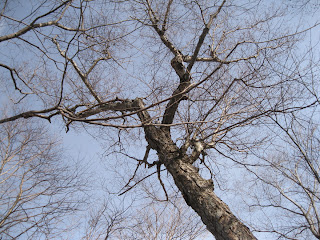