On a sunny but cold and windy day, with a touch of November in the air, John "1HappyHiker" Compton and I decided to shelve a hike over the Willey Range and instead journey farther west to Ethan Pond and the remote country around the North Fork of the Pemigewasset River's East Branch.

We started from the Willey House Site on the floor of Crawford Notch. Behind the buildings we followed a short path up to a new wooden viewing platform built by Crawford Notch State Park manager John Dickerman and crew. 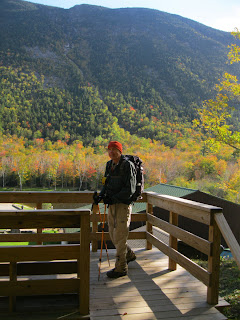 This spot has a great view of the Webster Cliffs. 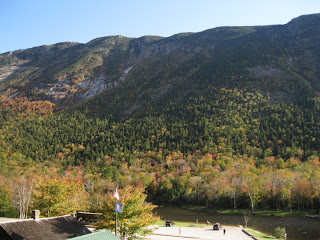 Right behind it are the Willey Boulders, the rocks that are said to have split the famed 1826 Willey Slide, sparing the house below, but not the Willey family, who ironically fled into the path of the slide. These historic chunks of stone were “rediscovered” in 2008 when White Mountain collector Paul Accamondo obtained an old postcard showing the boulders, and brought it to Dickerman’s attention. You can find an image of this (or a similar postcard) with a Google search on "Willey Slide" "postcard." A photo of these rocks also appears in the 1925 booklet, The Willey Slide, by Rev. Guy Roberts. From the boulders a new side path leads 80 yards to the Kedron Flume Trail, creating perhaps the shortest loop hike to a viewpoint in the White Mountains. 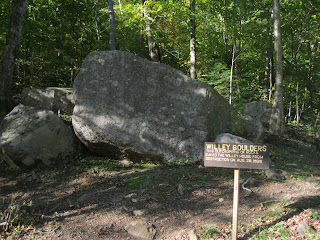 Then we headed up Kedron Flume Trail, following long gravelly switchbacks and some steeper pitches up to the crossing of Kedron Brook at Kedron Flume, with a view across to the south end of the Webster Cliffs. 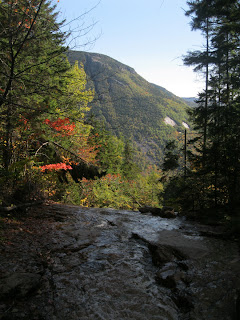 The cascade above the crossing is long, thin and lovely. 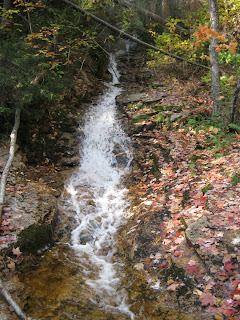 Below the trail is a waterfall of major proportions, but it's hard to safely get a good look at it. This might rank as a major Notch attraction if it were accessible from below. 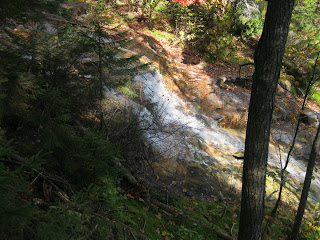 Above Kedron Brook, the trail has a section of steep, rough climbing. 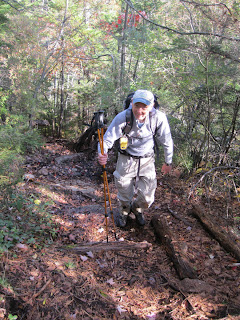 A bit of color along the Ethan Pond Trail. 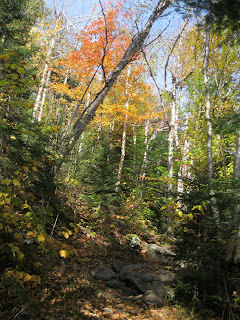 The NW wind was whipping up little whitecaps on Ethan Pond. With the water so sky-blue, this spot was even more beautiful than usual. Ethan Allen Crawford, who discovered this watery gem in 1829, was quite taken with it: "For beauty and grandeur, it is no where surpassed by any spot, to me known, about these mountains.” The Twin Range outlines the western horizon. 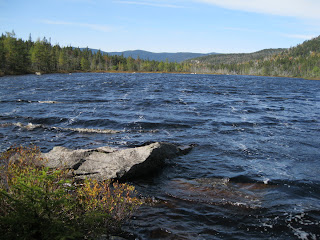 The ledges we planned to visit could be seen in the distance. 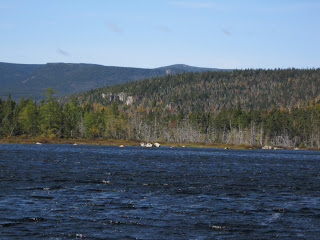 The shelter, bustling with AT thru-hikers a few weeks earlier, was empty and forlorn. 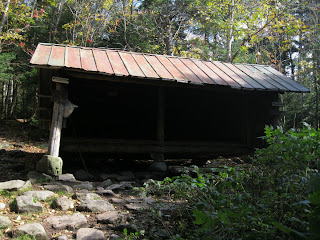 Lots of plank walkways along the boggy sections of the Ethan Pond Trail. 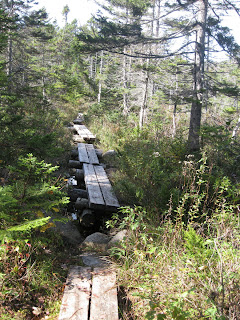 A view back to the imposing western face of Mt. Willey. 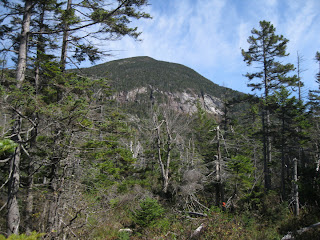 A 0.6 mi. relocation, done a few years ago, takes Ethan Pond Trail on a meander to the north. 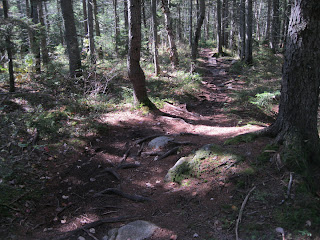 This section of trail provides a closer look at the cliffs. 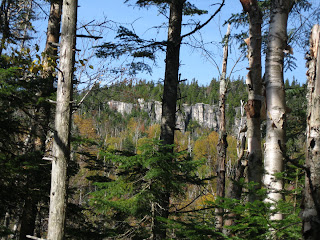 We left the trail and crossed the North Fork. 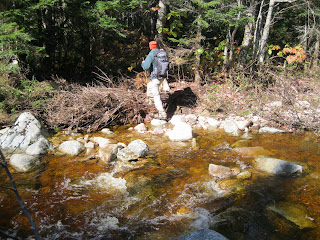 Traversing a flat area, we found some nice open woods. This is wonderful wild country. 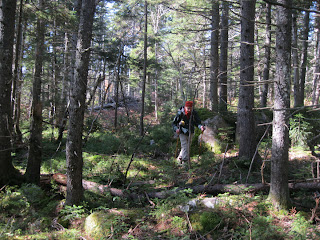 We reached the edge of a remote bog pond, which we wanted to have a look at before we climbed to the ledges. 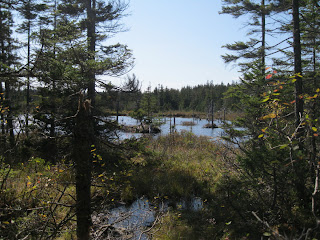 Looking south from the edge of the pond, we had a glimpse of Mt. Carrigain. 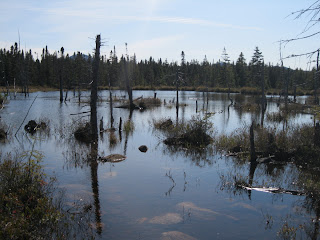 North of the pond is a picturesque bog sprinkled with cotton grass. 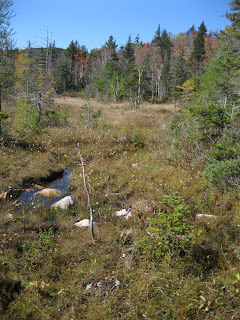 John takes in the scene. A bit of the nameless summit east of Whitewall Mountain can be seen in the distance. 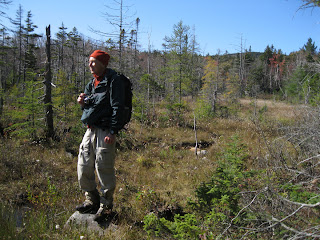 The whack up to the clifftop ledges was more difficult than anticipated, with some steep rugged terrain and generally scrappy conifer growth. Both of us had encountered easier conditions on prior visits to these ledges. 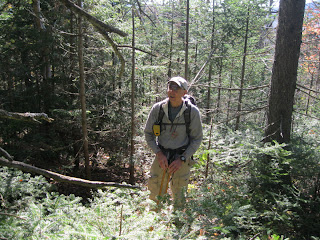 Eventually we found our way out to the best clifftop perch, and spent an hour soaking in the sun and the wide views over the eastern Pemi Wilderness. From this vantage, Mt. Passaconaway, way south in the Sandwich Range, is perfectly centered through Carrigain Notch. 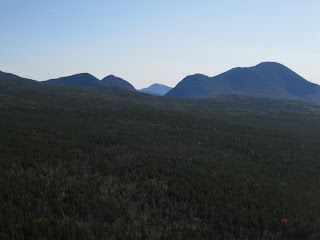 The spruce plateau of the eastern Pemi sweeps for miles out towards Carrigain and Hancock. There are thousands of acres out there where no one ever goes. East of the Shoal Pond Trail, there are no trails and no peaks – only endless ranks of gloomy spruces, the dark forest cover broken here and there by a moose-haunted bog 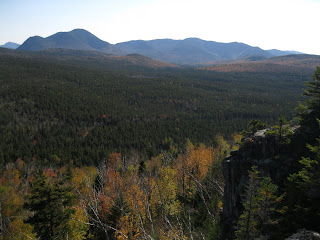 Looking east, we had a clear view of Mt. Willey, with a peek at Ethan Pond. 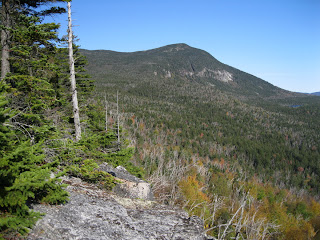 Stairs and Resolution peer over in the distance. 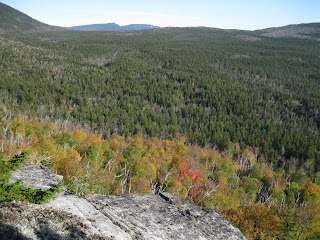 We took a different route down, and after some initial softwood tussling we found better going in birch glades aglow in their October colors. 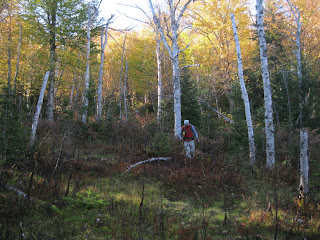 We passed this small bog illuminated in late afternoon sun. 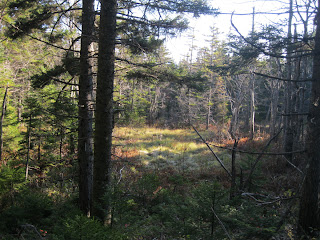 On the way out we made a short bushwhack to the edge of another bog with a view back to the ledges we had visited. 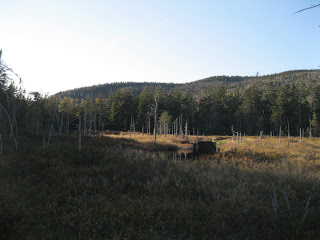 Here also was a view up to the West Peak of Mt. Field behind its long south ridge. What great country out here along the North Fork! 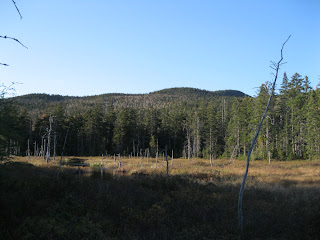