The Shelburne, NH area has a hiking tradition dating back to the late 1800s, when AMC trampers would sojourn at the Philbrook Farm Inn (which is still welcoming guests today). There has long been an extensive network of trails in Shelburne, leading to some of the small but interesting mountains at the south end of the Mahoosuc Range. However, over the years some of these trails fell into disuse, while others were obliterated by logging.

Enter the new Shelburne Trails Club (STC), which had its beginnings in 2009 and was formally organized in 2010. Over the last two years, this energetic band of local residents has re-opened several abandoned trails, and has spruced up some of the other trails in the area.

One of the trails re-opened by the STC is the Scudder Trail, which ascends 2242-ft. Mt. Ingalls. I had climbed this back in 1992, when it was previously open, and at that time it was obscure enough to almost be called a bushwhack. On a subsequent visit in 2006, it had been decimated by logging in its lower part, and was removed from the guidebook. Now it has been re-opened and re-blazed, and I joined Dick Lussier, President of the STC, for a hike up the Scudder on a hot, hazy, midsummer-like day.

The trailhead is 0.5 mi. up from North Rd. in Shelburne on the gravel Mill Brook Rd. The trail sign was adorned with a moose bone. 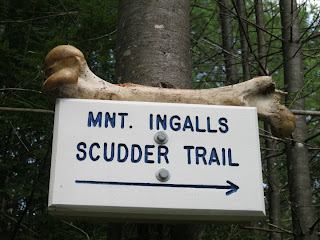 The first 1.3 mi. leads up an old skidder road where the woods are recovering from logging. Dick and other STC members have been working hard to keep the brush at bay in these open areas. 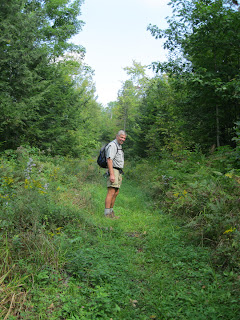 With the abundant sun, this area has a wealth of late summer wildflowers. 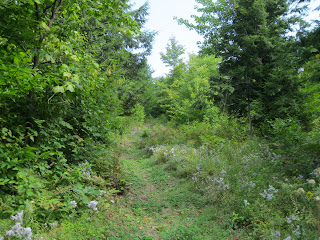 After passing a junction with a connecting trail to Mt. Cabot (the other Mt. Cabot), the Scudder Trail turns left and runs along a neat clifftop shelf, passing an excellent ledgy viewpoint. The Presidentials were smothered in clouds and haze, but there was a good look at Shelburne Moriah Mountain, seen to the south across the Androscoggin valley. 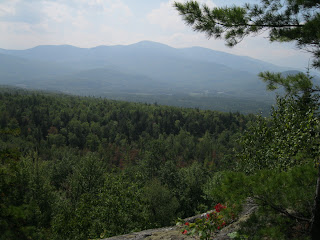 The upper half of the Scudder Trail is a gem. It meanders upward through a variety of woods, with mostly easy grades and occasional steep pitches to keep you honest. There are fine conifer stands... 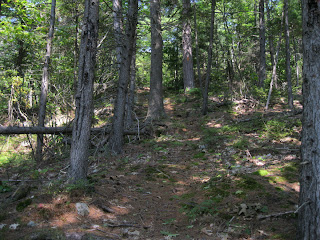 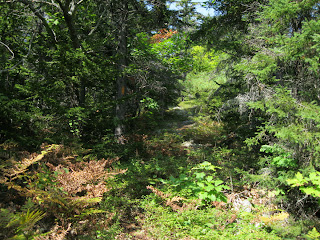 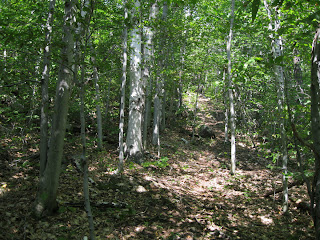 ...and more outlook ledges. The footway is not yet well-worn in some places, but the trail is well-marked with orange blazes that can readily be followed with a little extra attention through the many twists and turns. 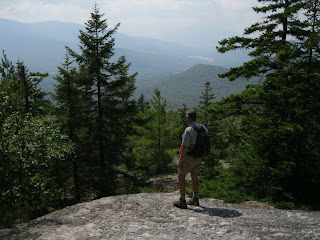 One ledge just to the right of the trail offers a view east to Bear Mountain, a high trailless peak in the eastern Mahoosucs. 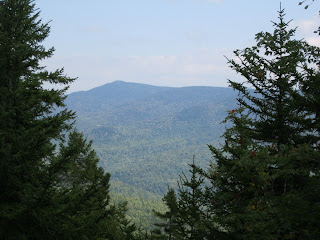 A cozy little col along the ridge of Mt. Ingalls. 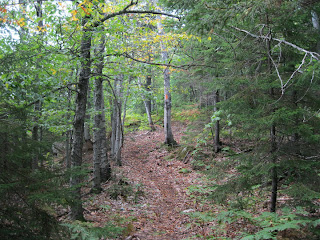 One section of trail looped to the left over some more ledges, following cairns from the original route, which was laid out in the 1950s. Dick related that this trail was cut by Seth Briggs - who in his 90s still works on Philbrook Farm area trails - and a Mr. Scudder, because Mrs. Scudder wanted a trail up to the ledges she could see from the valley. 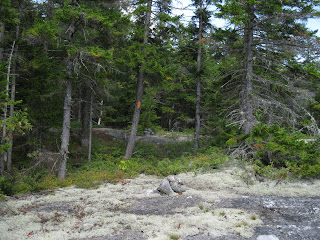 Just before the summit, we took a lunch break at an expansive ledgy area which, on a clear day, would have a fine view of the Presidentials. This photo is underexposed so that at least some of the mountains would show up through the haze. 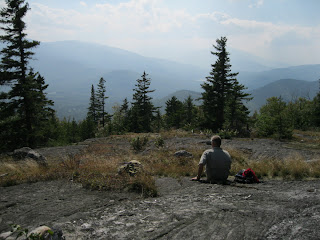 The true summit, marked by a slightly vandalized sign, is wooded. 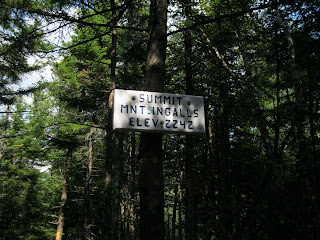 The trail continues another 0.1 mi. to a tiny pond secluded in the forest, which, as Dick told the story, was unofficially named after a local resident perhaps 20 years ago. The name has made it onto at least one trail map. 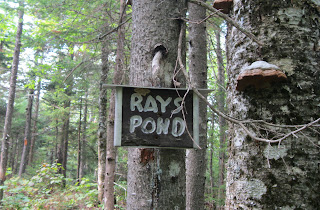 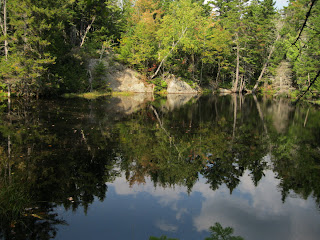 Heading back across the near-summit ledges, with the Royces on the horizon. 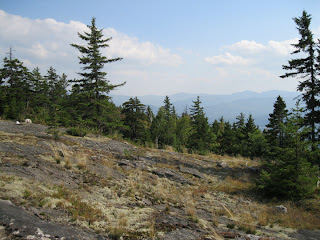 A late afternoon vista back at the lowest outlook ledge. 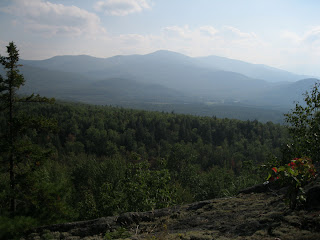 We made a loop back over 1512-ft. Mt. Cabot. A woodworker member has made beautiful signs for the STC. 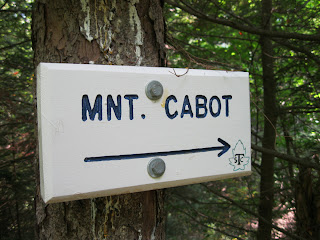 A little way down from the summit of Cabot on the Blue Trail, a spur drops to a ledge with a view of Bear Mountain beyond a shoulder of Mt. Ingalls. 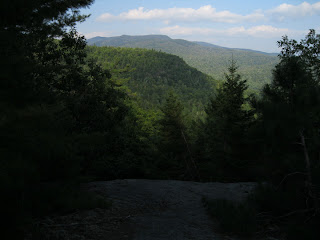 Speaking of bears, one had left its calling card at the summit. 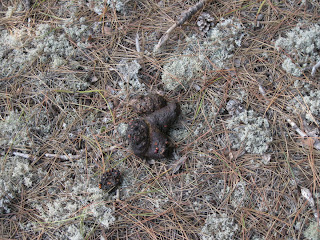 This old foundation is located at the summit of Mt. Cabot. Dick noted that there was once a shelter here, used by guests of the Philbrook Farm Inn. Apparently they would spend the night here and a guide would cook up breakfast for them in the morning. He also said that the currently overgrown view towards the Presidentials near the summit of Cabot would soon be cleared out by the STC. We then descended the pleasant Red Trail off Cabot, and followed a connector back to the Yellow Trail, which in turn took us back to the Scudder Trail near the trailhead. This was a most interesting and enjoyable day - thanks to Dick and his fellow STC members for all their good work on the Shelburne trails! 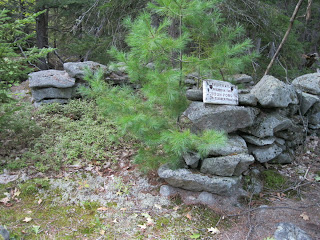