The twin Percy Peaks, North Percy (3,430 ft.) and South Percy (3,234 ft.) are the iconic peaks of northern New Hampshire. Though they are not the highest mountains in the area, their symmetrical cones and bare ledges dominate the landscape for miles around. In 1803, a writer called North Percy "the most exact and beautiful cone which I ever beheld." They are also the inspiration for the logo of the Cohos Trail, which runs 160 mi. through the length of Coos County. This view is taken from the nearby little peak called Victor Head. 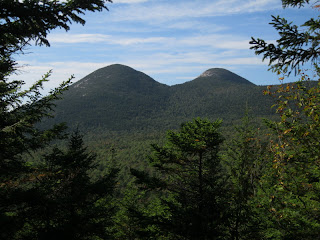 On a hazy late summer day, I hiked the loop over the Percys - up the older Percy Peaks Trail and down the newer Percy Loop Trail, with a road walk in between on the Nash Stream Rd. The Percys are both located within the 39,000-acre Nash Stream State Forest. The GPS track of the loop hike is shown on this snapshot from the USGS Percy Peaks quad via the National Geographic Topo! program. 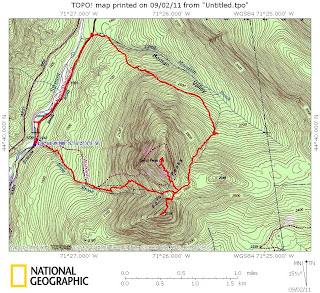 This sign on Nash Stream Rd. marks the start of the trail. 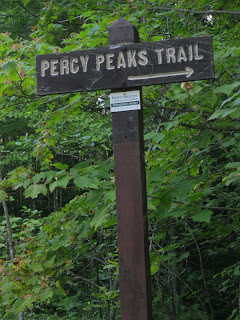 In its lower part, the Percy Peaks Trail passes through some fine hardwood forest. 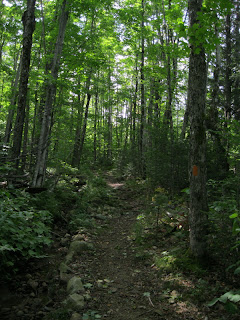 This prow-like boulder marks a left turn in the trail. 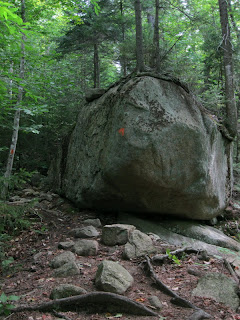 The last time I hiked this trail, a few years ago, much of it was badly eroded. Over the last couple of years, it has received a major facelift from crews working out of the North Woods Stewardship Center in Vermont. Long stretches have been relocated out of washed-out gullies, and other sections now feature well-built rock staircases. Excellent work! 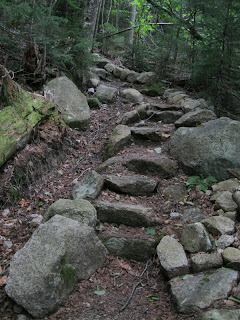 Higher up, the trail climbs through woods alongside this dangerous mossy slab. 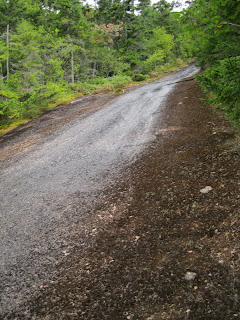 Then there is a section along some side-sloping ledges on the rugged flank of North Percy. 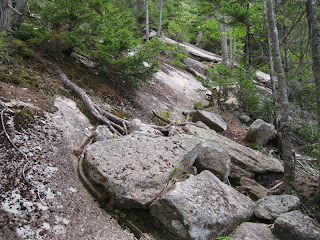 Beautiful open woods approaching the col between the peaks. 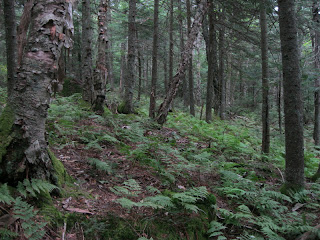 I headed up South Percy first. From a junction above the col, I descended a short distance on the Old Summer Club Trail (part of the Cohos Trail), then climbed the unmarked steep and rough path up to the south summit. My friend John Compton aptly described this path as "hobbit-like." 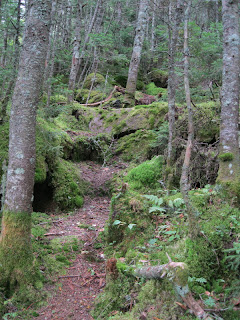 The outstanding feature of the view from South Percy is the impressive close-up of North Percy, with its great granite slabs fully displayed. 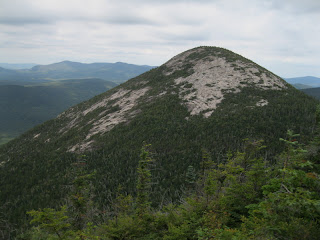 Nearby to the NE is the massive wooded ridge of Long Mountain. 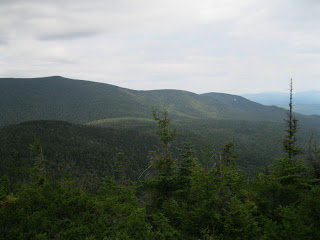 On the southern flank of Long is the neat little gap called Bald Mountain Notch, with Bald Mountain on its right. The Cohos Trail runs through this little-known pass. 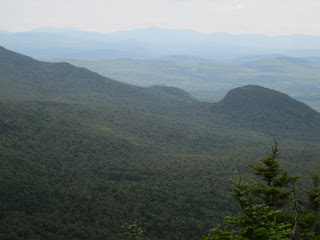 After descending to the col, I headed up to North Percy, where the upper half of the climb leads up a series of steeply-pitched granite slabs. Moses Sweetser's 1876 guidebook likened it to "climbing up over the dome of the United-States Capitol." This rock is very grippy, even with worn soles like those on my Merrell boots. Don't know what it's like when wet, but on a dry day you stick to it like flypaper. 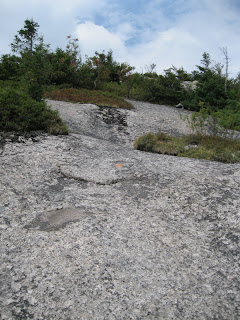 Looking west across the ledges. 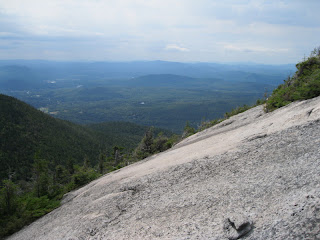 A hiker emerges under the cone of South Percy. 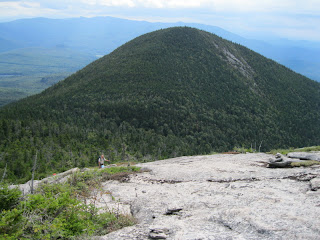 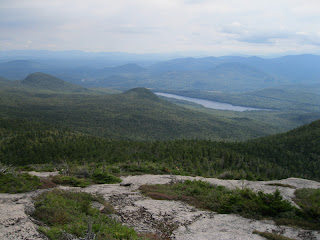 A sign marks the flat, scrubby summit of North Percy. Though it was late in the summer, there was still some good blueberry pickin' up here. 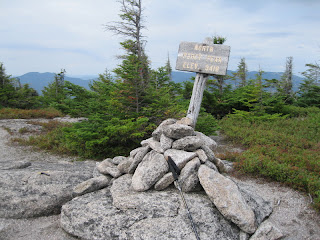 A new USGS benchmark is placed next to an iron pin that probably dates back to the days of the U.S. Coastal Survey in the 1870s. 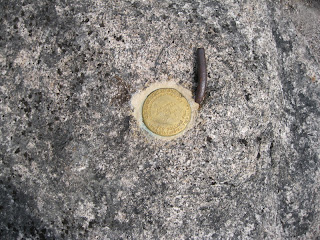 There are expansive views in nearly every direction from ledges around the summit area. This view looks north up the Nash Stream valley, with the Sugarloaf Mountain range enclosing it on the west. 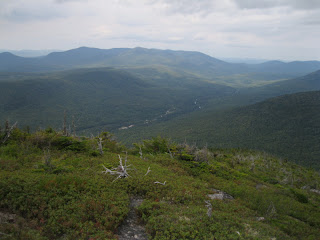 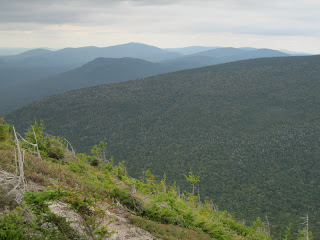 After a long stay atop North Percy, including an obligatory summit snooze, I headed down, making a short side foray to look down the steep slabs used by the long-abandoned West Side Trail, which was laid out by the great climbers Robert and Miriam Underhill. 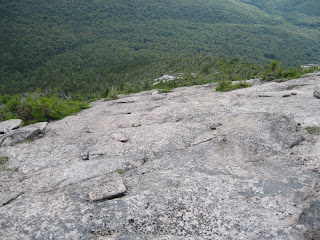 An interesting angle on South Percy from here, with the Pilot Range on the horizon. 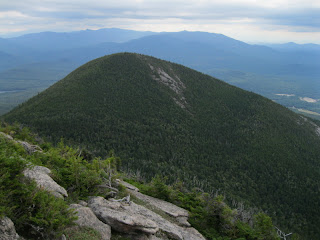 Back down off the cone, I turned L on the Percy Loop, a fine trail that was opened by the Cohos Trail Association around 2001. 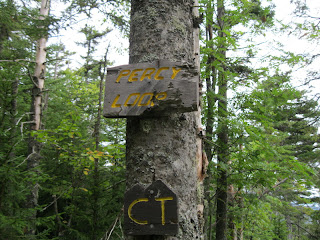 Halfway down this route, in the valley of Long Mountain Brook, is the Percy Loop Campsite, situated in an attractive birch and hardwood glade. 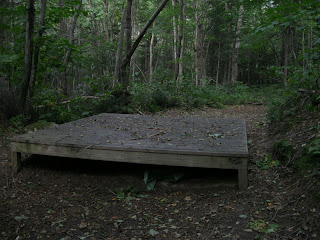 On a kiosk there's the story of how this campsite came to be. 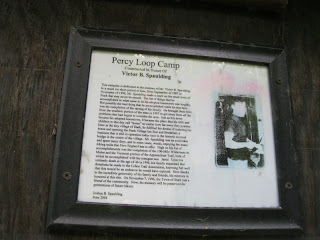 One of the more charming privies I've seen, if outhouses can be said to have charm. 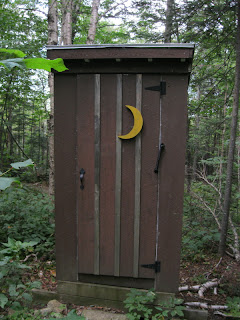 The lower 1.5 mi. of Percy Loop follows an ancient logging road down through this lovely hardwood valley - a great section of walking.

This sugar maple is a monarch of the Long Mountain Brook valley. 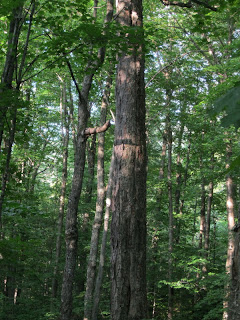 On the mile-long road walk back to the Percy Peaks Trail parking spot, there were a couple of spots where you could follow paths down to nearby Nash Stream. Not much evidence of damage from Tropical Storm Irene up here in the North Country. 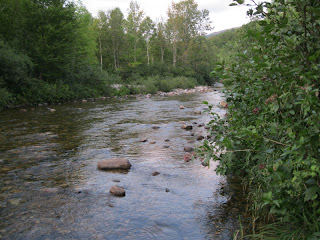 From the edge of a roadside logging cut, there was a view back up to North Percy.

But the highlight of the road walk was a chance meeting with Kim Nilsen, the founder and visionary of the Cohos Trail, who was worked tirelessly for more than a decade to make the trail the varied and fascinating route that it is today. He pulled up in an old pickup and asked if I was "doing the loop," then introduced himself. We talked trails for a good half-hour before he headed up the road to a remote camp and I continued the trek back to my car. Thanks for all your great work on the Cohos, Kim, and for writing perhaps the most entertaining and informative guidebook on my overloaded bookshelf! 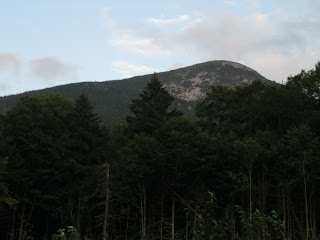