Three days after Tropical Storm Irene's prodigious rainfall drove the East Branch of the Pemigewasset River to record flow levels (17 ft. at the gauge in Lincoln, with a flow on the order of 30,000 cubic ft. per second), I took a morning walk at Lincoln Woods to assess the damage. Just a month earlier Carol and I had "adopted" the Pine Island Trail, a lovely footpath meandering along the east side of the river parallel to the Pemi East Side Trail. We had made one brushing and blowdown removal trip on this easy trail, but after Irene swept through I found that a bulldozer might be a more appropriate tool than a bowsaw.

The water level had dropped enough so that I could hop across Pine Island Brook near the start of the trail. Even along this secondary channel, uprooted trees were strewn along the banks. 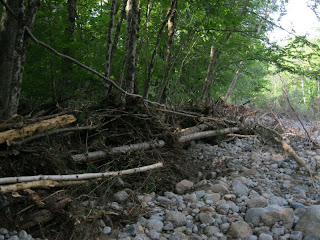 And thick drifts of sand had been deposited in the woods. 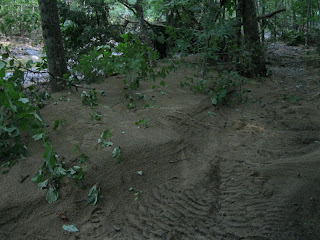 The first 0.1 mi. of the trail was OK, but when I reached the spot where it came close to the river, and had been sandy from previous overflows, I found that things had changed rather dramatically, starting with a newly opened view upstream to SW Twin. 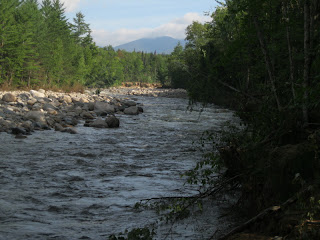 For some distance beyond this point, the trail was....gone. This surviving blaze tree marked the start of the first section that was washed away. 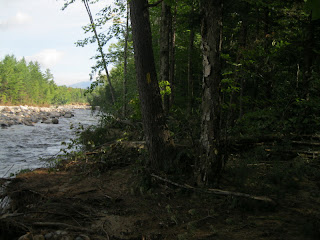 Across the river, I could see that the riverbank was severely gouged and undercut. 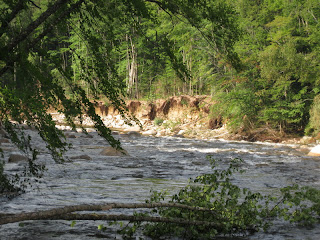 More sand-drifts in the forest. 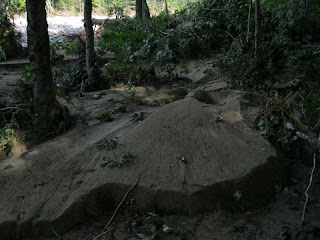 As I bushwhacked north through the mangled woods behind the former trail location, I edged carefully out for another newly revealed vista, downstream to Black Mountain. 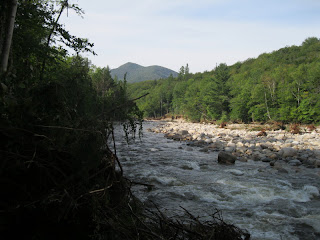 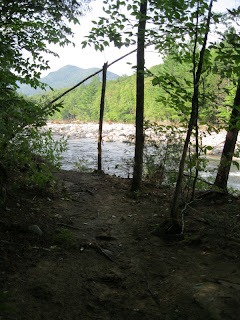 Torn roots along the new riverbank. 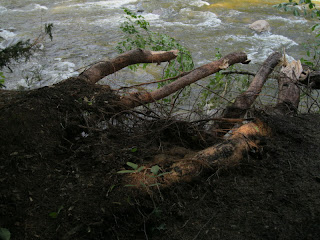 The middle section of the trail was farther back from the river and was in good shape, until the spot where it swings back out towards the normally dry, rocky overflow channel at the north end of "Pine Island." The tree destruction here was stunning. 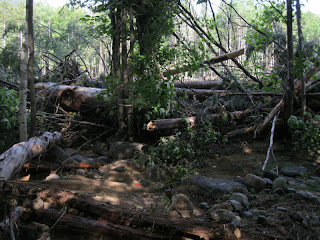 This is the route of the trail. 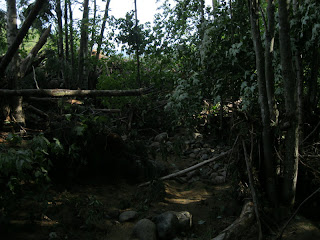 Where the overflow channel comes off the main river, the storm surge had created a huge pile of rocks. The water flow of the channel is now confined to a narrow trough along the northern edge. 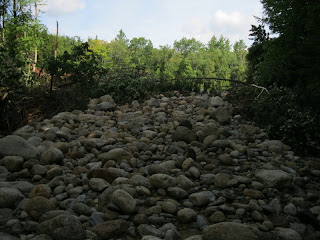 The path of Irene's destruction, overlooked by trailless "Peak 2675." 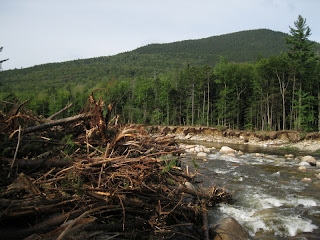 From the edge of the overflow channel, a nice view upstream to West Bond and Bondcliff. 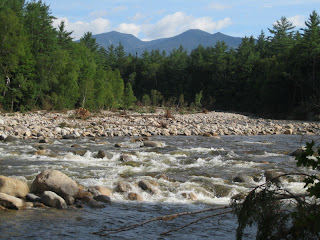 North of the overflow channel, the trail was again obliterated. The spruces it led through were gone; there were now hardwoods along the relocated riverbank. I worked out through the mess to the edge for a view of Owl's Head. 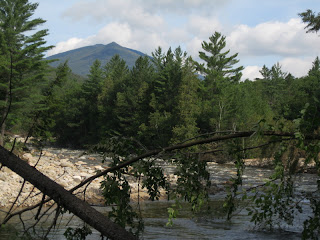 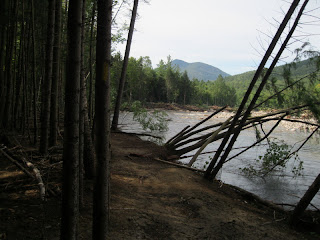 The northern 0.1 mi. or so of the trail lives on, as it was away from the full force of the raging river. 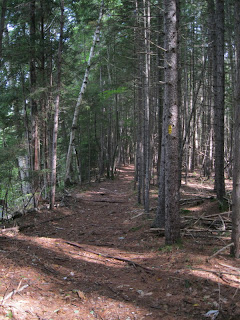 At another rocky overflow channel near the north end of the Pine Island Trail, there was now a new sandbar. 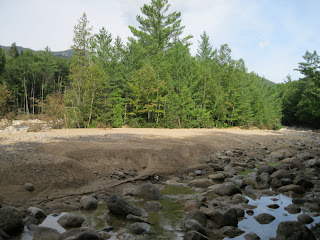 For the return walk I followed the gravel road known as the Pemi East Side Trail. Long sections of this were severely gullied by the storm, and a culvert at the base of a steep hill was blown out by a small brook, leaving a gaping cut in the road. 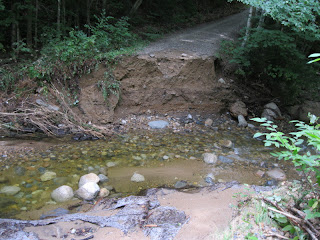 The culvert had been pushed 50 ft. or so downstream. 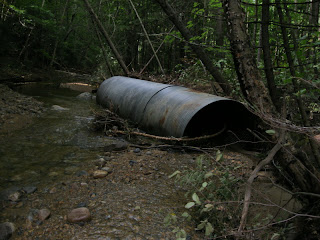 A new view across the river had been opened farther back along the East Side Trail. The landscape and riverscape have a new look at Lincoln Woods, post-Irene, and the Pine Island Trail will continue to exist only if major relocations can be made to replace the sections that now reside in the East Branch. 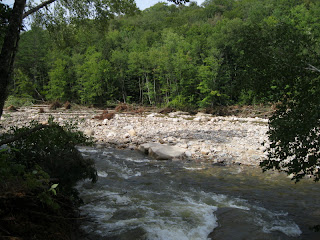