I was joined for a spring work trip on Passaconaway Cutoff by frequent helper Jim Durning of Dover and North Woodstock (also a fellow member of Pemi Valley SAR), accompanied by his delightful Chinook, Myah. It was a perfect day for trail work, cool and cloudy with a strengthening wind to repel the bugs.

Jim's Loon ski patrol hat has a temporary resting spot on the sign at the Oliverian Brook/Passaconaway Cutoff junction. 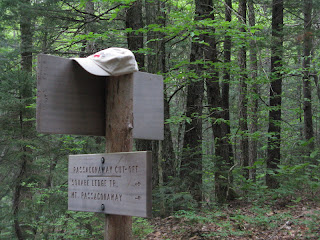 Jim and Myah pose at the crossing of the west branch of Oliverian Brook, a half-mile up the Cutoff. 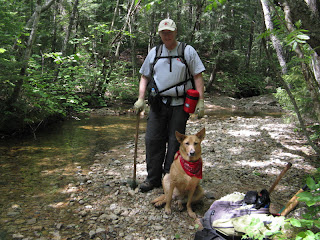 Not far beyond the crossing is a peaceful hardwood corridor, one of my favorite stretches on this trail. 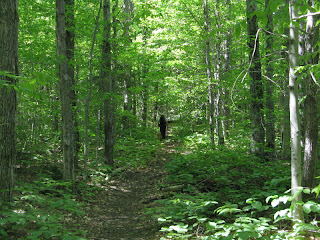 Jim plans the strategy on a multi-branch blowdown. 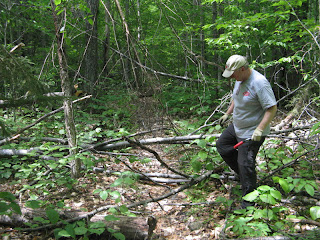 There's a nice resting spot by the brook a bit more than halfway along the trail. We always take a break here before starting up the steeper section of the trail. 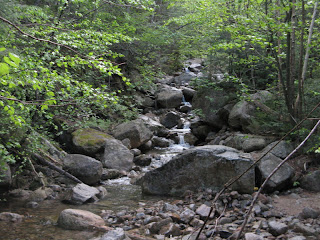 Behind a curve in the brook, there were a number of trees snapped off in the downhill direction. We figured there must have been an ice jam here during the spring melt. 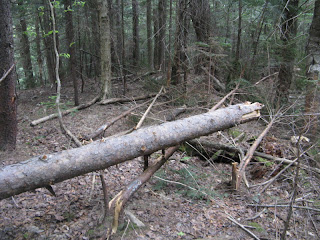 Another blowdown, farther up the trail. We removed 16 in all, some by hauling off, others with multiple cuts. Along the way I snipped hobblebush with my loppers. It's a constant challenge to keep this prolific shrub at bay. 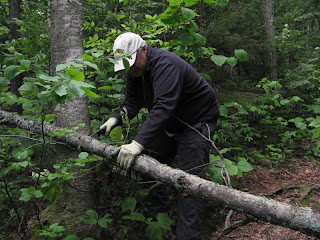 Myah was very patient, resting each time we stooped to work. She found a comfortable spot in this freshly-cleaned waterbar. The Chinook is a rare and special breed, first bred by legendary sled dog runner Arthur Walden at his farm and kennel in Wonalancet. This is the same Walden for whom the Walden Trail on Mt. Passaconaway was named, and he was married to Kate Sleeper, who founded the Wonalancet Out Door Club and has both a trail and two peaks named in her honor. Chinooks are noted as gentle, lovable dogs, and Myah is a fine representative of her breed. Myah's sister, Millie (short for Millinocket), was unable to join us today due to a minor injury. 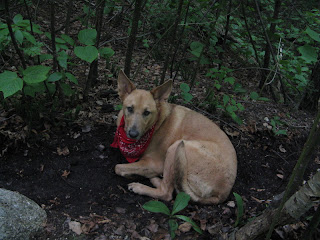 Near the top of the trail I found a small bluff just down the slope with a look up at the imposing mass of Mt. Passaconaway. 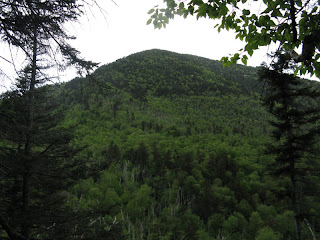 The last of the 43 drainages have been cleaned, time for a break before heading down. Thanks to Jim for all his help on the trail, and for allowing me a chance to get to know Myah. 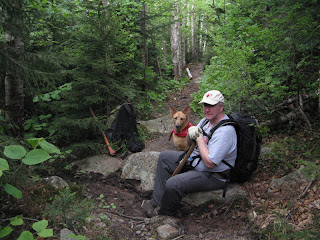