THE BOWL & THE BEEHIVE

Friday was the nicest day of the week, with wall-to-wall sunshine, but it was also our departure day, so my hike this morning had to be quick enough to get me back to the hotel by 10 am. The short loop to the mountain pond known as The Bowl, and up to ledges on a spur of the nearby Beehive, fit the bill perfectly.

I parked at the Sand Beach lot and walked up and across the Park Loop Road to the trailhead. 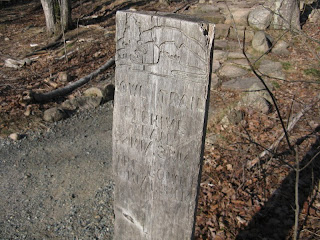 After a short climb on the Bowl Trail I had my first look up at the cliffs of the Beehive. 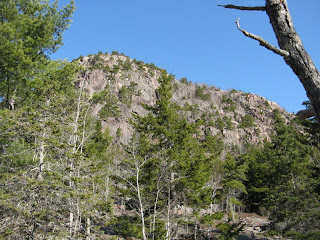 A little bit farther there was an even more imposing view at the junction with the "ladder" section of the Beehive Trail, which is sort of a shorter and easier version of the famed Precipice Trail. 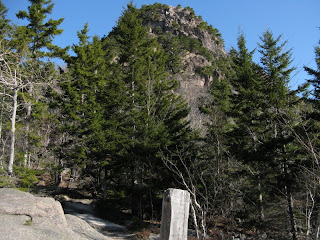 It's difficult enough to warrant a warning sign at the start of the trail. 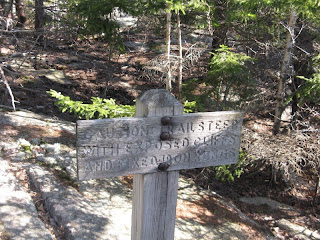 I chose the easier route today, continuing up the Bowl Trail through spindly hardwoods grown up after the big 1947 Mount Desert fire. 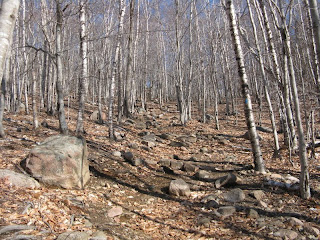 The trail climbs over a small height-of-land and descends to the shore of The Bowl, which is nestled amongst ledgy mountains at an elevation of 400 ft. It's one of the prettiest spots in Acadia. There's a wooden seat at the shore from which to admire the view across the water to Champlain Mountain. 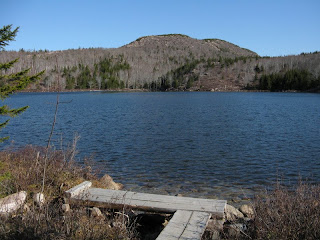 A closer look at Champlain. The air was crisp and cool this morning, and the views crystal-clear. 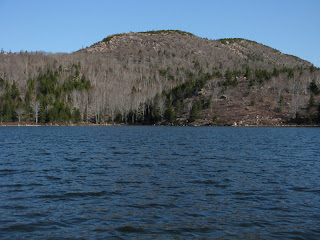 There are some fine ledges where the northern end of the Beehive Trail skirts the SE corner of the pond. 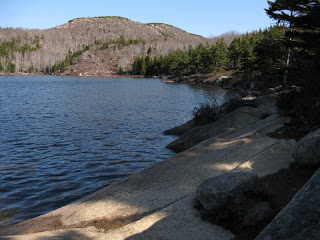 I followed the Beehive Trail on a short, steep climb to an open, ledgy NW spur of the Beehive. Here was a classic Acadia vista, looking NW over the blue water of The Bowl to Cadillac, Dorr and Champlain Mountains. 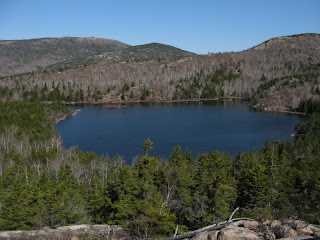 A zoom on Cadillac (L) and Dorr (R), the two peaks I had climbed the previous day. 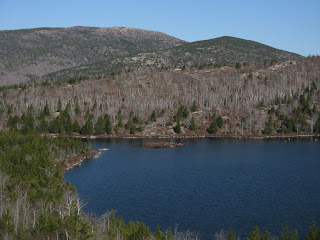 Looking more to the west, I could see the entire South Ridge of Cadillac. Hope to do that long ridge walk on a future visit. 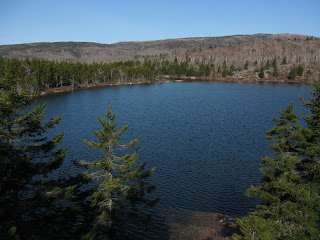 Close by to the SE was the main summit of the Beehive. 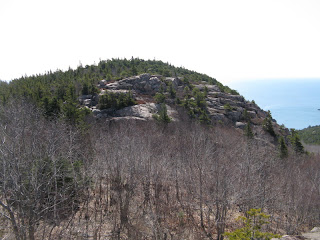 Looking NE to Frenchman Bay beyond the ledges of trailless Enoch Mountain. 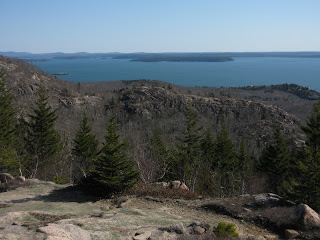 After gawking at these stellar views, I didn't have enough time to visit the main summit of the Beehive. So I descended a connector trail from the col between the two Beehive summits, passing by some interesting cliffs. 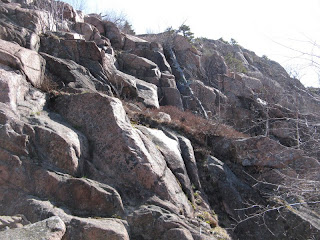 This was a fairly steep, rugged little route, but nothing like the ladder part of the trail. 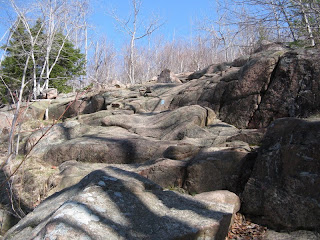 On the way back down the Bowl Trail, I found another neat angle on the Beehive. I'm thinking this hike is a sure contender for the "biggest bang for the buck" hike in Acadia. 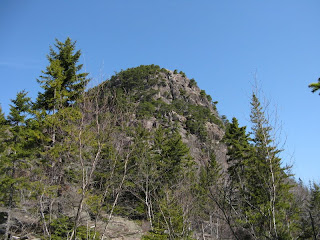 A DRIVE UP CADILLAC MOUNTAIN

Before heading back to New Hampshire, we took a drive up the smoothly paved and mostly easy-graded auto road (3.5 mi. long) up Cadillac Mountain. At the top we walked the 0.3 mi. paved Summit Loop Trail to take in the views. 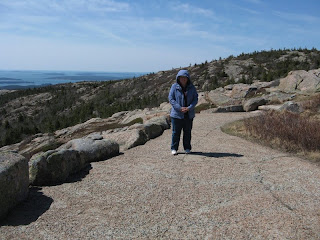 It was a phenomenal day for views. This vista looks south towards Otter Point. 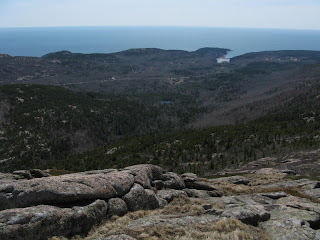 East to Dorr and Champlain Mountains and Schoodic Point. 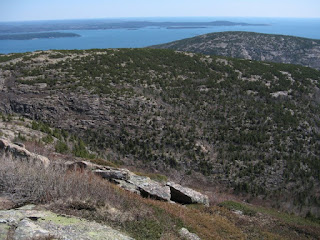 The upper end of the Gorge Path, my descent route on the previous day's hike. The town of Bar Harbor can be seen at the upper L. 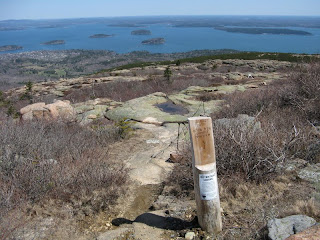 To the NNW, a snow-caked Katahdin could be seen (L of center in the photo), 100 mi. away, like a puff of cloud on the horizon. 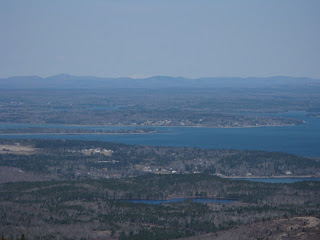 On the way down we stopped at the Blue Hill Overlook for the western views, including Sargent Mountain, second-highest in the park. 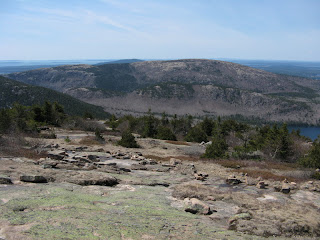 Closer by to the SW was the dark mass of Pemetic Mountain. 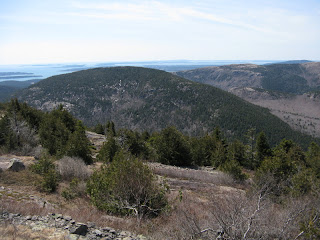 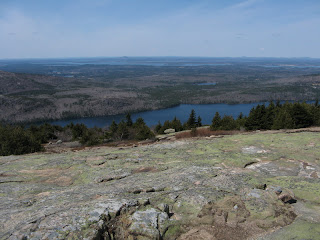 Our last stop before heading out was the parking area at the north end of Eagle Lake, the only place an automobile road comes close to the shore of this spectacular water body. From here you can see Cadillac Mountain... 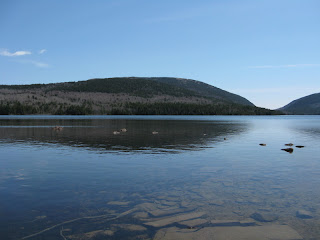 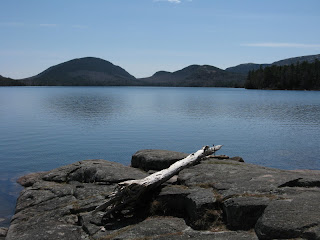 ...and Sargent Mountain. It was a great visit, and we look forward to returning to Acadia next spring, if not sooner. It truly is a hiker's paradise. 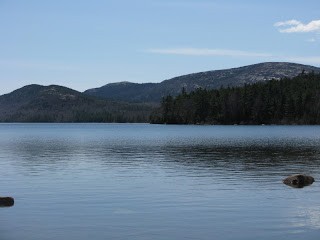