The calendar said April, but this morning had more of a February feel. A surprise two inches of snow fell overnight in the hills (probably more at higher elevations), and driving was tricky in the morning. I headed up the Kanc and bucked through the little snowbank into the unplowed parking lot at Greeley Ponds for a morning snowshoe jaunt. There may be no other hike that gets you as quickly into a place with a true backcountry feel than Greeley Ponds/Mad River Notch from the Kanc.

The temperature was 28 and the trail had a midwinter look. Lots of branch-banging. 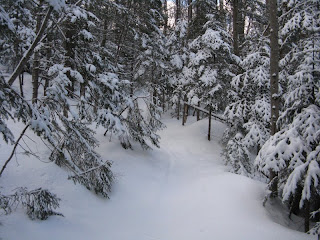 The crossing of the two streambeds of the South Fork of Hancock Branch required some creative snowshoe placement. Actually, the toughest crossing was a steep and deep gully where a tiny streamlet cuts across the trail, before reaching the South Fork. 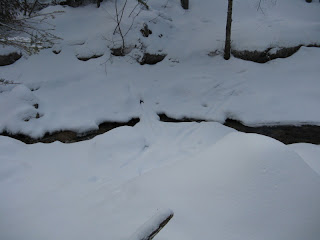 This may be the last time I break trail through powder this season...I hope. 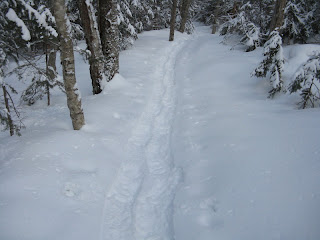 The wind was howling overhead as I snowshoed up through open woods towards the height-of-land in Mad River Notch. 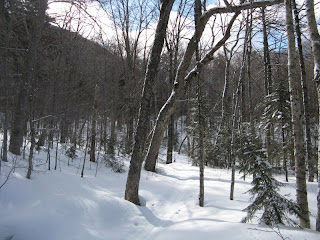 There are some fine old hardwoods on the floor of the Notch, near the junction with the Mount Osceola Trail. 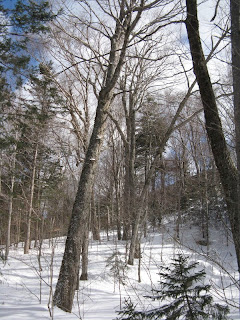 This boulder is a landmark as you head south from the height-of-land. 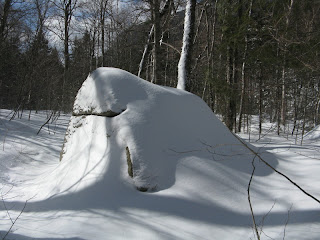 The new snow had drifted deeply on the trail as it cuts through dark woods above the shore of Upper Greeley Pond. 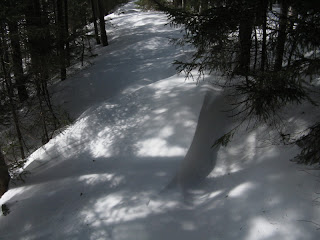 The view from the trail at the SW corner of Upper Pond, gazing up at the NW knob of Mt. Kancamagus and the "K2 Cliff" (so named by Watervilleans a century ago). 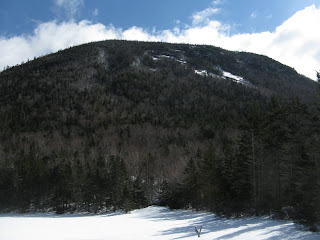 Other than a bit of open water by the outlet, the pond was still well-frozen. I followed ski tracks across the south edge, but did not venture out to the center. This was one of the latest pond crossings I've ever made, but I wouldn't trust the ice after the upcoming warm spell. Looking north, you see the cliffs on West Huntington. 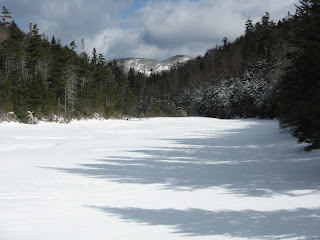 From the SE shore, the view up to the slide-scarred slopes of East Osceola is dramatic. The clouds were racing over the top of the ridge, and snow devils were skittering across the surface of the pond. 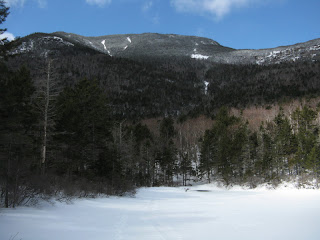 Hardcore backcountry skiers sometimes swoop down the two slides at the upper left. The Mount Osceola Trail is more to the right; the arrow shows where it crosses the slide well up on the slope, with a view down to Upper Pond. 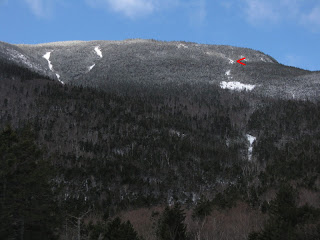 I always enjoy the gentle ramble down the floor of the Notch between the ponds. 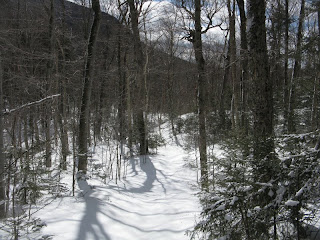 A flood event in March carved out this snow gully along the trail. 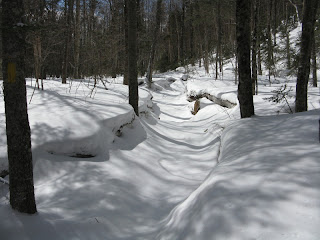 The Lower Pond is wider and more expansive than Upper, and also doesn't freeze nearly as well since it is shallow and boggy. Still, I was able to snowshoe along the west shore on deep, hardpacked snow, and out to the bog at the south end. The warmth of the spring sun somewhat offset the chill of the NW wind. A variety of views can be enjoyed at Lower Pond. Looking up at the NW knob of Mt. Kanc and the K2 Cliff. 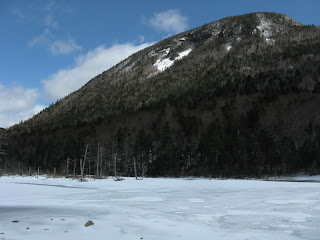 Looking back at the cliffs on the NE arm of East Osceola. 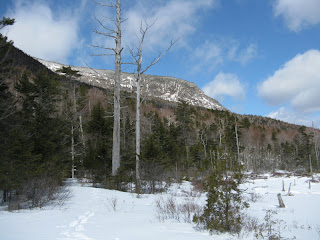 Looking down to the SW ridge of Mt. Kanc and a partial profile of the K1 Cliff, backlit in late morning sun. 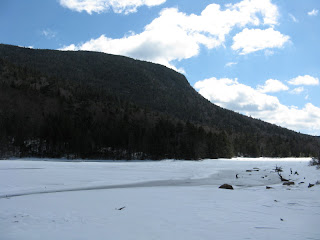 A profile of Mad River Notch. 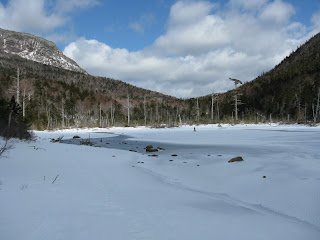 From the frozen bog at the south end of the pond, a view up to yet another slide, and a profile of the Painted Cliff. 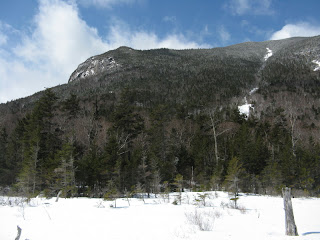 Looking north up the pond from the natural log dam at the outlet. In any season, the Greeley Ponds and Mad River Notch are a backcountry delight. 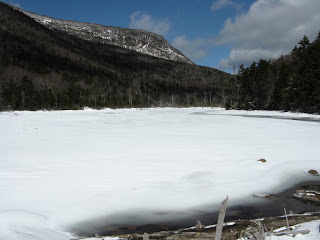