The middle day of our Acadia visit was predicted to be a washout, but by mid-morning the radar map looked OK, so we headed out to take a tour. First we went out the Park Loop Road to Bubble Pond, one of the several gorgeous, large glacial ponds in the park. This one is nestled in the deep gap between Pemetic Mountain and Cadillac Mountain. 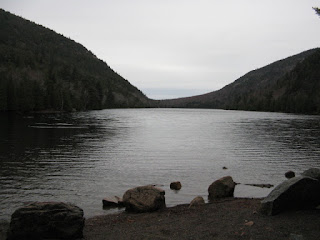 Seven weeks out from knee surgery, Carol declared her freedom from the crutches. She enjoyed several short, crutch-free walks in the park today, the first along the shore of Bubble Pond on the lower part of the Pemetic North Ridge Trail. 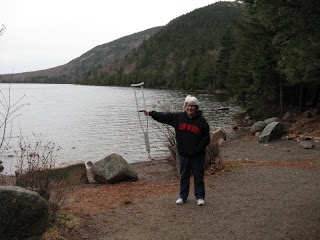 Next stop was Jordan Pond and a walk on the Jordan Pond Nature Trail. This pond is famed for its view of the two gumdrop-shaped Bubbles rising at the north end. Even on a grey day, this was a beautiful setting. We watched two park rangers taking water samples for testing.We also walked up to the grounds of the Jordan Pond House, which is famous for its tea and popovers during the summer months. 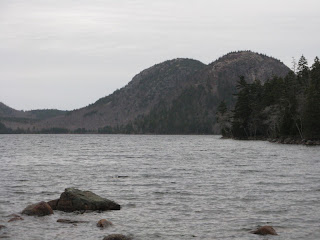 After a stop at the Hulls Cove Visitor Center to stock up on Acadia literature, we headed out on the one-way section of the Park Loop Road, which leads along the shore. We stopped for a look at the Great Meadow, a large open bog with with views of Champlain and Dorr Mountains. 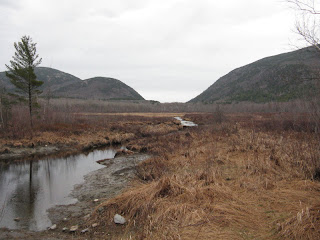 Next we stopped at the Sieur de Monts Spring and went for a walk on the Jessup Path. A recently built boardwalk led for a quarter mile or more through a swampy wooded area. 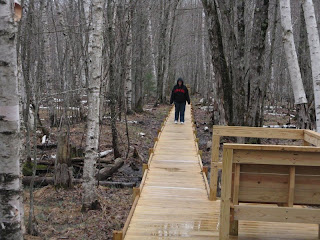 Then the trail led out to a corner of the Great Meadow, with a look up at Dorr Mountain. 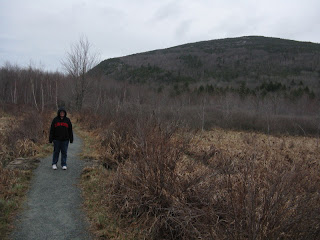 A side route, the Hemlock Road, offered this inviting birch-lined aisle. 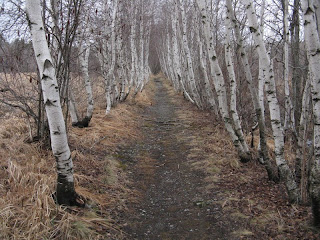 We also wandered around the paths of this native plant garden. Carol, an avid gardener, would love to see this when things are in bloom later in the season. 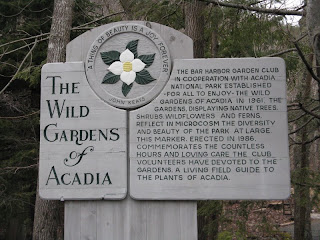 Then we drove down to the parking area for the Precipice Trail, which scales an unlikely route up the cliffs of Champlain Mountain. As usual, the trail is closed through early August to protect nesting Peregrine Falcons from disturbance. After hanging out for a few minutes, we saw the Peregrines circling over the clifftop. We also watched an Osprey sail by. 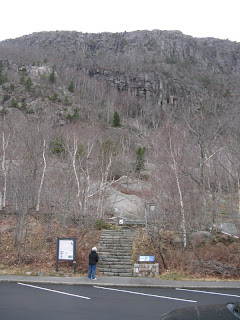 I scanned these rock faces with binoculars, but could not figure out the route of the trail. Back at the hotel we found a 14-minute video of a couple's ascent of the Precipice. As the videographer noted, there is a significant "pucker factor" on this route with dropoffs of hundreds of feet. 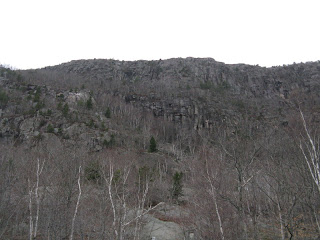 Then it was on to Sand Beach, one of the few beaches on this rockbound coastline. I descended the stairs (a temporary bypass route while the walkway undergoes repairs) and admired the view down the rocky headlands. 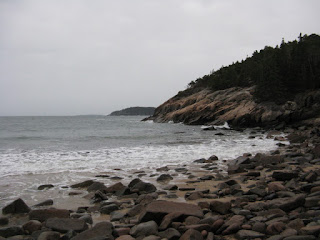 From the beach there was a neat view of the peak called the Beehive, looking across a lagoon. 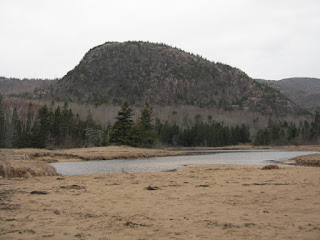 I went up the Great Head Trail to the first ledges for a more elevated view. 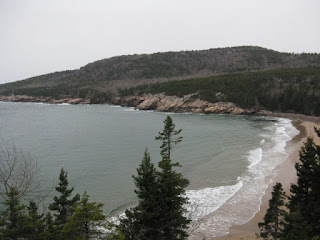 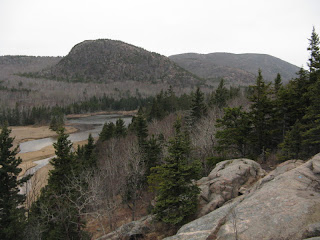 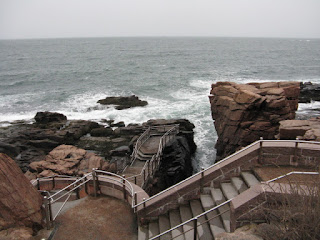 Farther down the road were the Otter Cliffs, one of the more dramatic spots in the park. 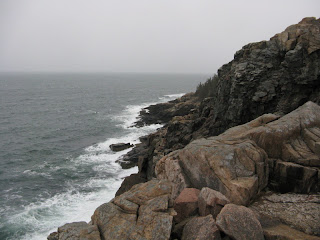 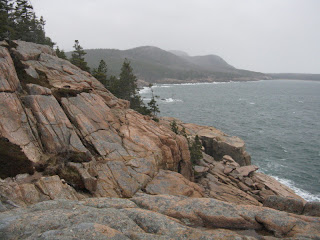 Our last stop, as fog and drizzle closed in, was Otter Point, where I had a good look at a couple of Black Guillemots, a striking black-and-white seabird. We were pleased at how much walking and scenery enjoyment we were able to get in on a day we figured we'd mostly be hanging around town. 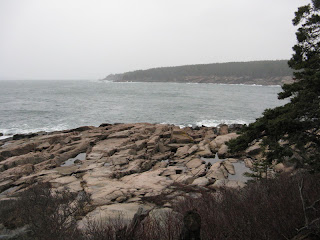