I decided to take an afternoon off and head down to Waterville Valley for a hike up the Timber Camp Trail, which has an interesting viewpoint looking east to the Tripyramids and Mt. Kancamagus. The morning was partly sunny, but by the time I got to the Livermore trailhead, fuzzy flurries had moved in and they persisted the rest of the day. Mine was the only car in the large parking lot. Pretty lonely out here midweek in mid-December.

Alongside the Greeley Ponds Trail, the Mad River was flowing heartily a few days after the big rain. 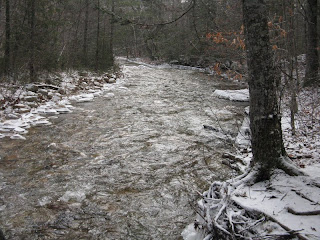 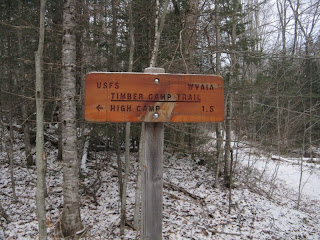 This trail follows a well-built logging road up into the valley of Greeley Brook, on the SE side of East Osceola. This basin is laced with logging roads that were put through to salvage timber after a hurricane devastated the area, perhaps in 1950. The trail climbs at easy to at most moderate grades. It was originally opened as an X-C trail and is also great for snowshoeing or summer hiking. 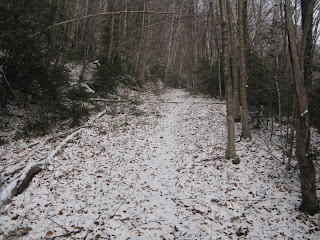 At 0.6 mile from Greeley Ponds Trail you bear L at a fork. 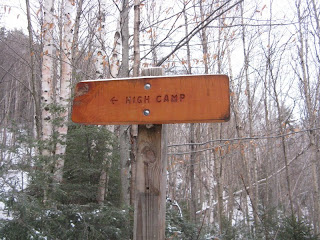 In another 0.6 mile, at elevation 2400 ft., the trail comes to a big open bank of gravel and runs along its base. 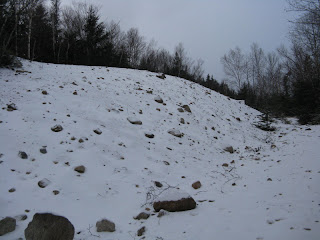 By clambering up to the top of the bank you gain an unusual and interesting view east to the SW ridge of Mt. Kancamagus, Flume Peak, and the Tripyramids. Unfortunately flurries blotted out the Tripyramids part of the vista. 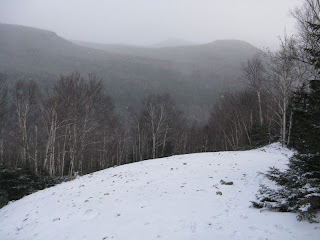 Here's the view on a cold, clear winter day, with the top of Tripyramid's North Slide visible above Flume Peak. Scaur Peak is to the L. 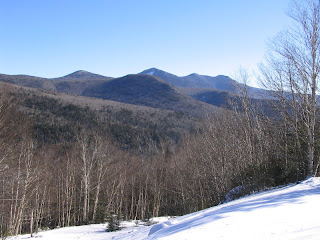 There's also a look NE to the cliffs on the western face of Mt. Kancamagus. 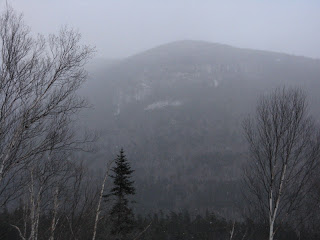 Again, the view on a better day. The "K1" Cliff is on the R, the "K2 Cliff" on the L. Around 1910 Watervillians blazed rough trails to both of these cliffs. They must have been really rough, and didn't last long. A few years ago I tried to get down from the ridge to the top of K1 on snowshoes, but it was too steep and dicey to get out on the open rock. I did manage to work down and around to a remarkable rock jutting from the forest just below the talus slope that lies under the K1 Cliff. I dubbed this rock "The Beak" for its appearance when viewed from this spot on the Timber Camp Trail. It had quite a view of the entire E face of Osceola. 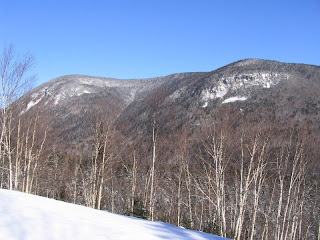 From the gravel bank the Timber Camp Trail continues another 0.3 mile up the valley; here you can see the Greeley Brook headwall ahead. This part of the trail is very wet in places and there was quite a bit of ice under a dusting of snow. (Up to the gravel bank the trail was dry with good footing and virtually no ice.) 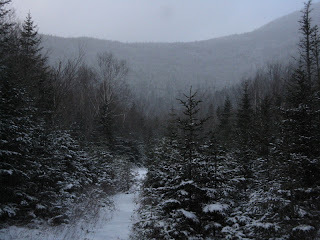 The maintained trail ends in a stony clearing near the site of "High Camp." From here you get a dramatic look up at the Painted Cliff on a spur of East Osceola. 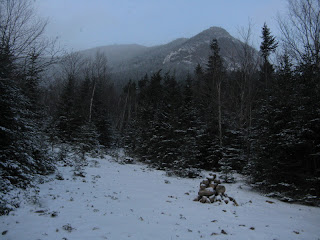 A zoom on the cliff, which is a hollowed-out scoop in the mountainside. According to Nathaniel Goodrich in his 1952 book, The Waterville Valley, his brother and friends blazed a "Nature Trail" up towards these cliffs and back down towards the Mad River. But shortly thereafter the path was obliterated by the 1938 hurricane.

Years ago two friends and I snowshoe-whacked up to the talus slope at the base of the cliff. The closeup of the cliff was impressive, and the view out to the E was expansive. The whack was quite thick in places and our route took us through some scary terrain with huge boulders and deep holes. 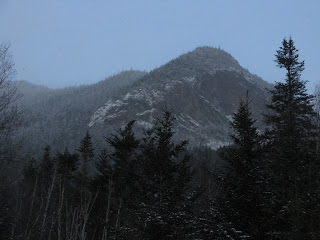 A rusting barrel lying in the woods near trail's end. 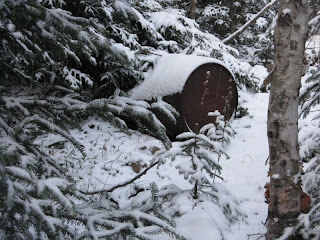 From here I followed an unofficial trail farther up the valley, then explored along an assortment of paths and old tote roads, finding two framed views of the Painted Cliff from different angles. This side view shows how steep and even concave the rock face is. 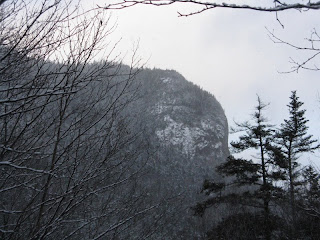 A particularly wild-looking angle with the talus slope, the scooped-out rock and the spiky ridge above all revealed. 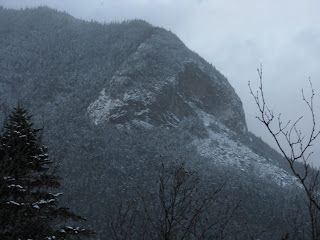 Back down near High Camp, some kind of filter [?] along the trail. Another interesting area to explore around Waterville. 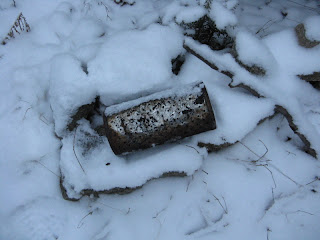