Continuing on a recent Waterville Valley theme, I returned to the Livermore trailhead for an afternoon hike to the ledgy nubble of The Scaur, one of our short hike favorites, with a plan to bushwhack down to Flume Brook and look for an old splash dam from river driving days.

The snowy ledges of The Scaur can be spotted as you approach the Depot Camp clearing a short way in on the Livermore Trail. 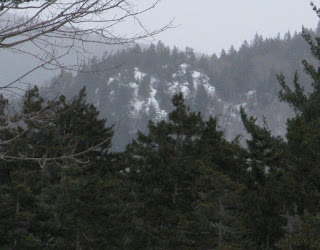 I made a short side trip to check out the confluence of Avalanche Brook and the Mad River. 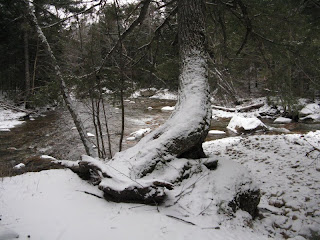 I rarely pass by "The Boulder" set in the middle of Avalanche Brook without scooting over for a quick look. 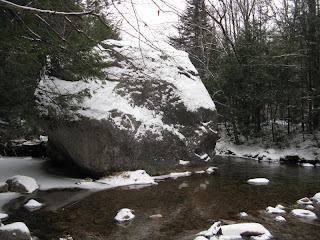 The longer but easier route to The Scaur uses the delightful Kettles Path and the upper part of the Scaur Trail. These are very old trails, having been laid out in the late 1880s/early 1890s by summer Watervillian Arthur L. Goodrich. 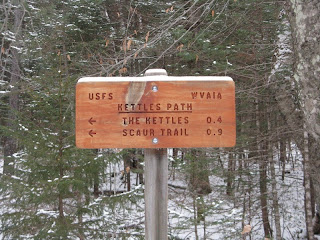 The three Kettles - deep wooded bowls in the forest floor left behind when ice chunks from the receding glacier melted away - are more easily viewed with the leaves down. 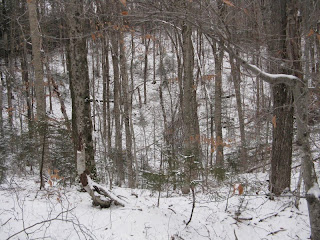 I had first tracks in just an inch of snow on these pleasant trails. 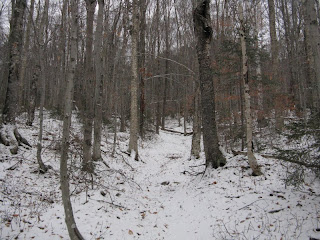 The Scaur Trail wraps around the base of The Scaur, revealing some of its rocky architecture. 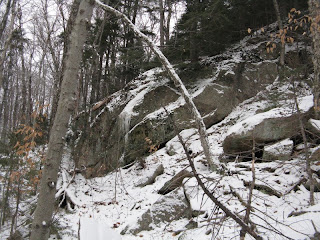 The upper part of the trail climbs steeply through conifers. The light snow cover was slippery, but there was only one small icy patch on the trail. 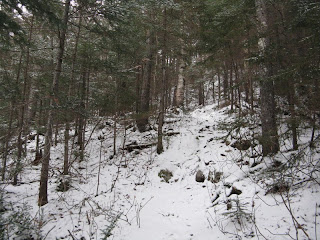 A small tree provided a convenient handhold for the scramble up a ledgy slot near the top. 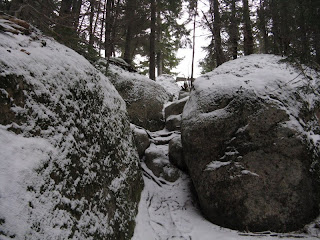 Persistent snow showers fuzzed out the higher peaks in the wide southerly view at the top, but I could still see down into the valley and across to Snows Mountain. 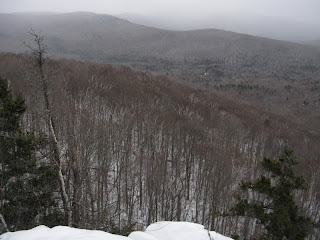 Middle and South Tripyramid and West Sleeper were ghost mountains to the SE. 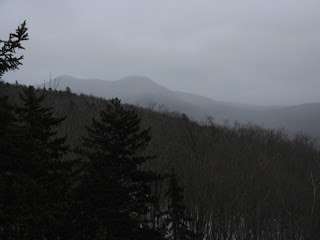 The snow guns were cranking over on Mt. Tecumseh. 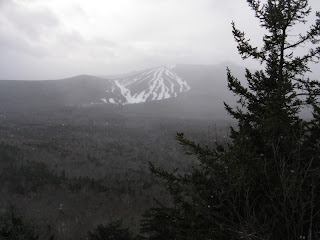 The bushwhack from the Scaur Trail down to the Flume Brook Trail started out in open hardwoods. 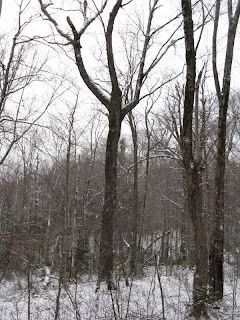 (A lost trails note: A.L. Goodrich's 1915 map of Waterville Valley showed a "Scaur to Flume" trail leading east along the ridge from The Scaur, with an outlook and a cave shown en route. I've whacked along this ridge a couple of times, and found a hard-to-get to ledge on the northern side with a view down Flume Brook valley to the Osceolas. Have not seen the cave.)

Heading down towards the brook the whack became entangled with hobblebush. 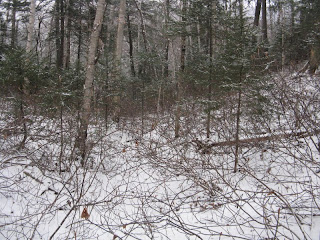 The rest of the descent was rather miserable with dense small conifers mixed with hobblebush. This is where I emerged on the Flume Brook Trail. 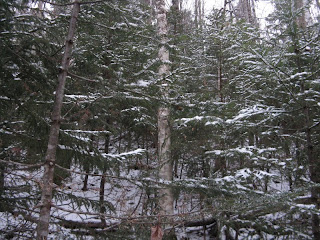 I went upstream and spotted the remains of the old splash dam from the trail, not far below the merge of Flume Brook with Kancamagus Brook. This was one of the uppermost of a series of dams used to store and then release water for pulpwood drives down the Mad River, from the early 1900s to the early 1930s. According to Bill Gove's Logging Railroads Along the Pemigewasset River, the river drives always consisted of pulpwood cut into four-foot lengths; large full-length logs were not sent down the rocky Mad River. 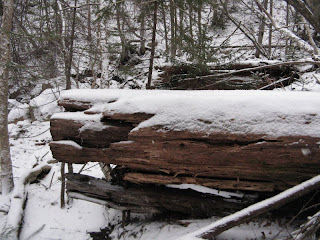 Looking upstream past the top beams of the dam. 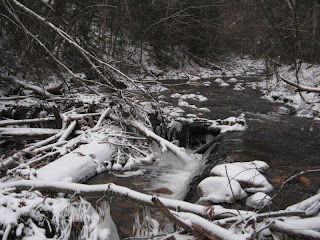 Lying across the main dam supports is a big axle with large gear wheels on either end. 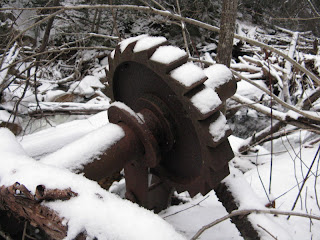 A heavy-duty chain is wrapped around the axle. 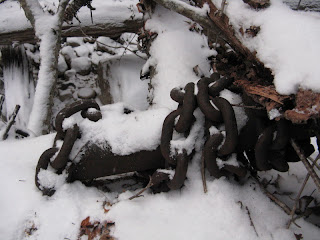 Perhaps this mechanism was used to open the gate of the dam? 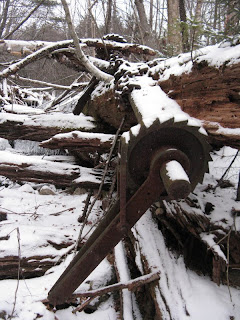 Spikes protruding from one of the support beams. 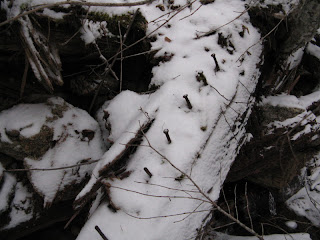 These gear wheels are just off the trail; I had never seen these on numerous previous trips along this trail. Definitely easier to spot with the leaves down and thin snow cover. 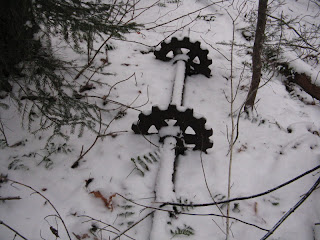 On the way out I made the short bushwhack to look at the small but pretty Towle's Fall, still in full flow. 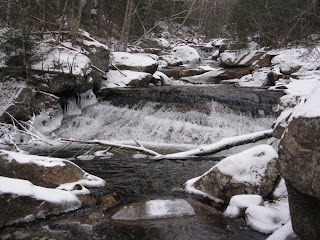 A leisurely walk back along the Mad River on Greeley Ponds Trail completed a nice afternoon outing. 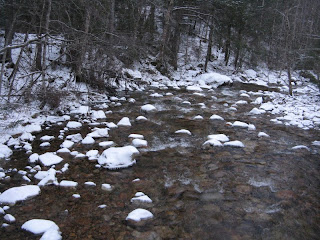