A short, leisurely hike with the possibility of good flower viewing was the objective for Carol and me on this cool, cloudyish spring day. Five years ago, in late May, I had seen some Dutchman's Breeches in bloom in the fine sugar maple stand on the top of Ore Hill (1,870 ft.), along a section of the Appalachian Trail known as the Ore Hill Trail. This flower, uncommon in the White Mountains, is indicative of an enriched hardwood forest, more properly known as a "rich mesic forest." This forest type, which is rich in mineral plant nutrients such as calcium, is well-described on the excellent "Natural Communities of New Hampshire" photo guide put together by the New Hampshire Natural Heritage Bureau:
www.nhdfl.org/about-forests-and-lands/bureaus/natural-heritage-bureau/photo-index/

On that site, Ore Hill is mentioned as a good example of a rich mesic forest community. (Mesic = moderately moist.)

Before hitting the trail, we stopped for a look at 315-acre Lake Tarleton, which was added to the White Mountain National Forest in the late 1990s. Mt. Moosilauke was smothered in cloud in the center of this view from the boat launch spot; the flat crest of Webster Slide Mountain can be seen on the left. 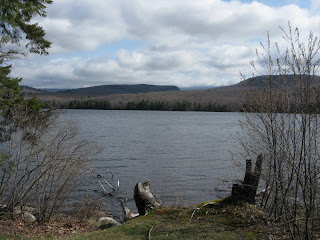 The Ore Hill Trail starts off NH 25C a mile and a half SE of Lake Tarleton. 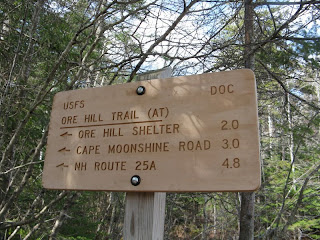 A few minutes of easy climbing lifted us into the extensive hardwood stand that cloaks the slopes of Ore Hill. 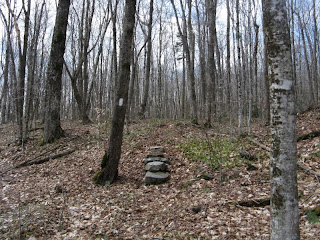 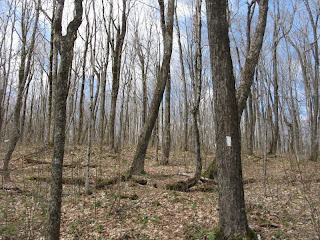 Spring Beauties were coming out all over the forest floor. 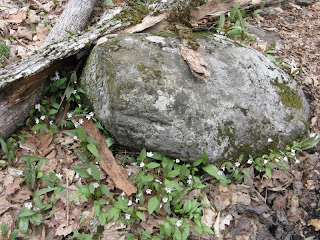 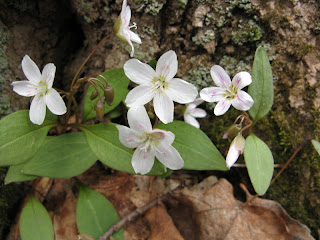 Spring beauties are among the cheeriest of the spring ephemerals, as the early-blooming flowers are known. 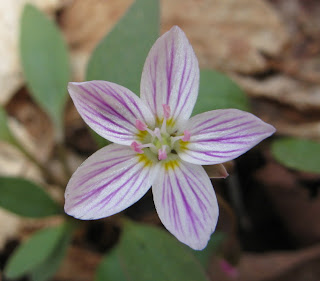 Clusters of yellow violets were sprinkled along the trail. I don't know flowers well enough to pinpoint the species. 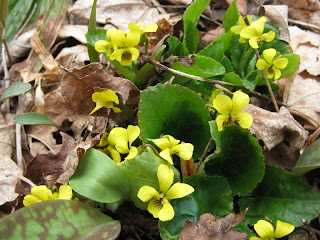 A few purple violets were scattered about. 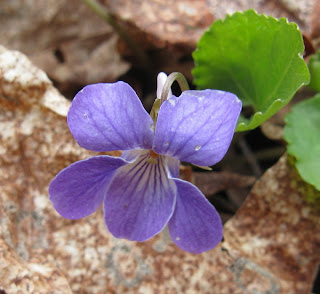 A few of the familiar Red Trillium or Wake Robin were also in bloom. 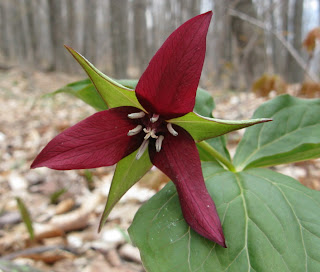 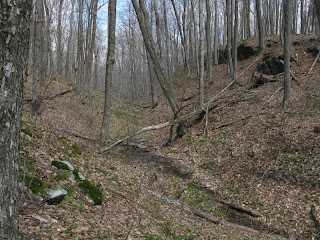 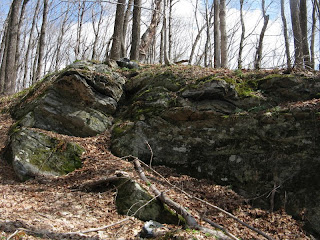 I was afraid we might be too early for Dutchman's Breeches, but everything is well ahead of schedule this spring, and we saw a number of them in bloom. 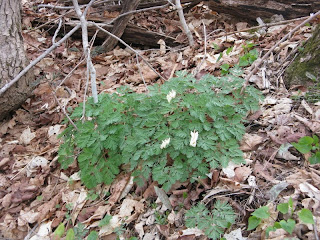 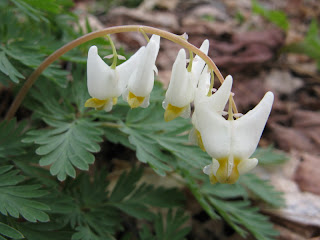 We were very pleased to find some Blue Cohosh, an unusual plant in the Whites, starting to unfurl. This plant was emerging from a cluster of Dutchman's Breeches. 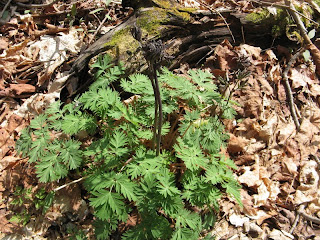 It was a little early for the blooming of the Blue Cohosh, but one flower did open up this day. 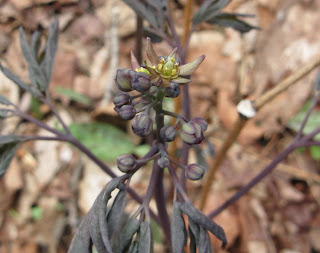 After descending south from Ore Hill, the trail ducks into a darker conifer forest. 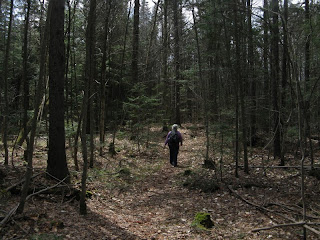 Our other objective for the day was a nameless beaver pond beside the trail, 1.2 miles from the trailhead - a quiet, secluded spot in the woods. Here we heard the ringing song of the tiny Ruby-Crowned Kinglet, which typically arrives in the Whites in late April. 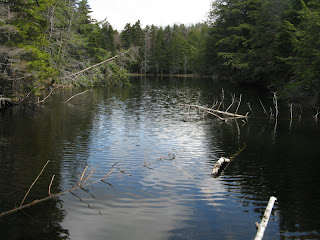 The pond can be viewed from an old moss-grown beaver dam beside the trail, where old moss-grown beaver-gnawed trees can also be seen. Not far SE of here is the old Ore Hill Mine site, which dates back to the 1830s. It was closed years ago by the Forest Service due to acidic and hazardous metal drainage into surface water; public access to the site is forbidden. The AT used to run through the mine site but was relocated away from it in the 1980s. In recent years the Forest Service has been attempting to rehabilitate the site. 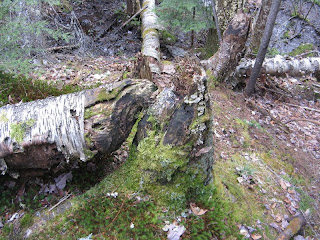 We returned to the glorious hardwoods for some more flower viewing. 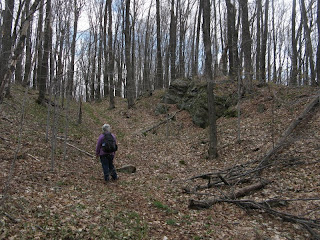 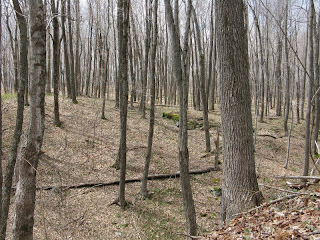 Additional Dutchman's Breeches had emerged during the early afternoon, when we saw a few peeks of sun. 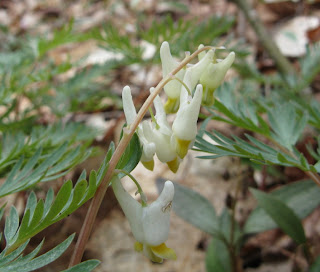 There were numerous Trout Lily leaves, but the few flowers that had emerged were mostly being coy. 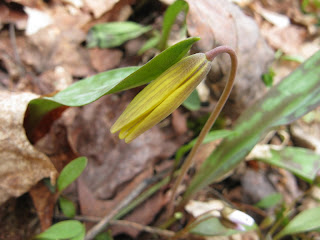 On the way down we found one cluster that had opened. That gave us seven spring flower species for the day. 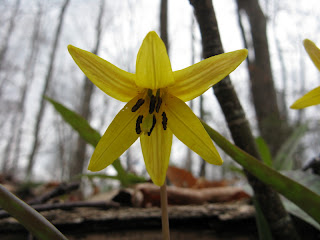 The day's one view, a good look at Mt. Moosilauke, came from the powerline opening the trail parallels near its north end. At the bottom we were greeted by the first White-Throated Sparrow whistle we've heard this season. This surely is a fine and fleeting segment of the natural year. 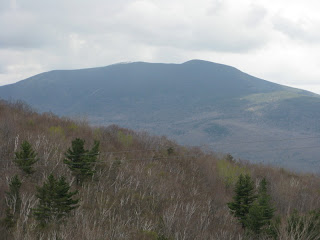