A gorgeous sunny day for a bushwhack up the south branch of Walker Ravine on the west side of Franconia Ridge, following the south branch of Walker Brook along the lower runout track of the long, narrow headwall slide. I hoped to visit two slides on the sidewalls well up in the ravine. Last winter I had snowshoed high up on the headwall, almost to the technical ice/rock climb known as Lincoln's Throat, and gone a short way up the two slides on the sides. On this trip I wanted to see the slides in their summer guise. As it turned out, the whack is much harder in summer due to slippery rocks and sketchy spots along the brook/slide track, necessitating several time-consuming detours over rocky terrain and through dense alder thickets. Due to my slow progress, and a camera failure after visiting the first slide, I did not make it to the second slide.

I hiked partway up Old Bridle Path, then dropped steeply down to Walker Brook, and followed an early 1900s logging road towards the fork in the brook. 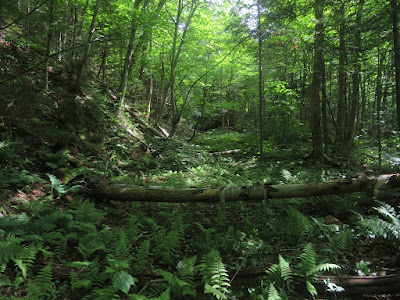 Bushwhacking through the woods along the south fork, I came upon the obligatory balloon, which I carried out. 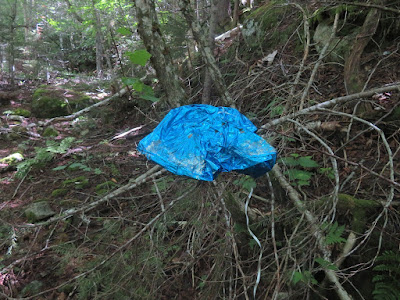 I remembered ducking under this blowdown last winter while following a side channel of the brook. 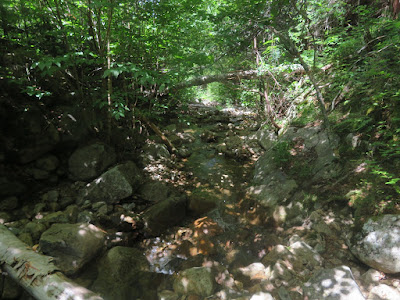 One of several steep obstacles on the brook to negotiate or detour around. Boulders heaped by slides in the streamside alders made for slow going. 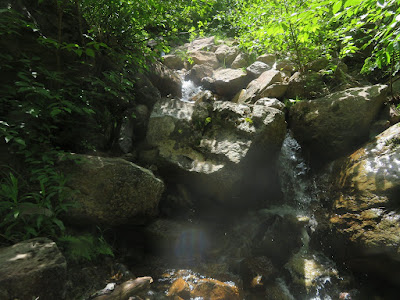 The sides of  the south fork brook/slide track are choked with thick alder growth well up into the ravine. 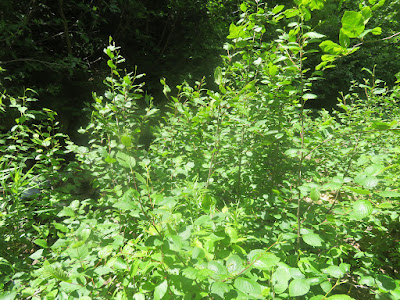 There were occasional glimpses of the big, century-old slide on the north side of the ravine. This was the second and much larger slide that I wanted to visit. 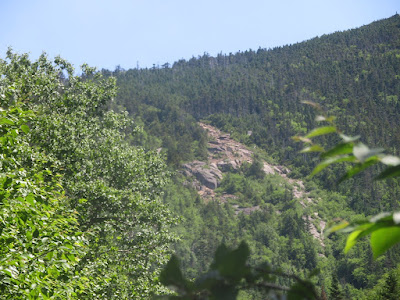 A nice small cascade along the way. 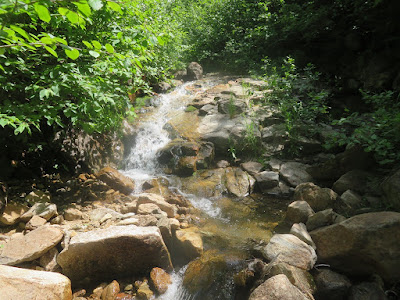 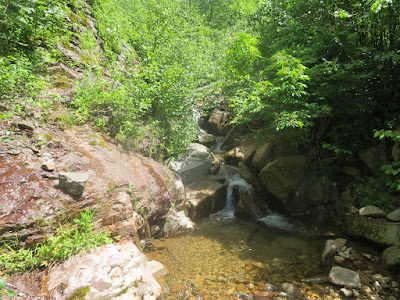 Worked a route around this wet, steep ledge. 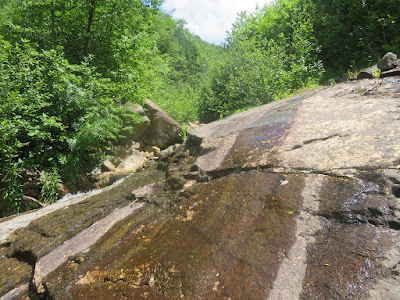 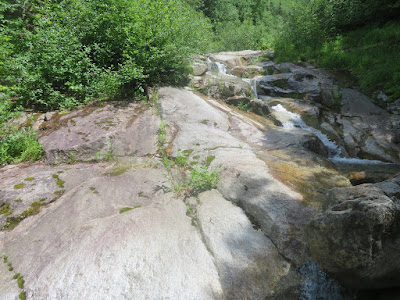 Looking back towards South Kinsman. 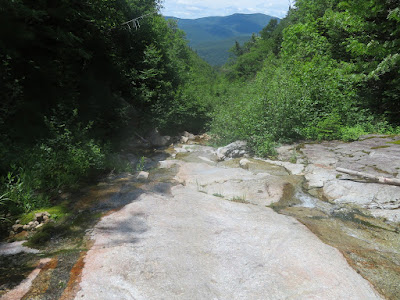 The headwall in sight ahead. Looked like a nice spot for a lunch break in the sun. 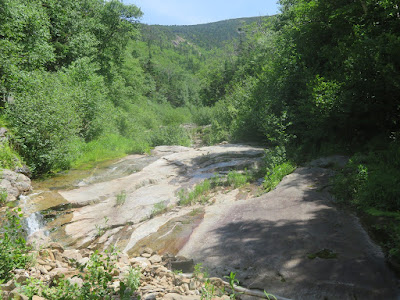 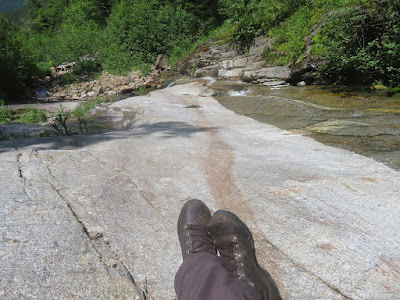 Just beyond was this wet, mossy, slick cascade/ledge step. 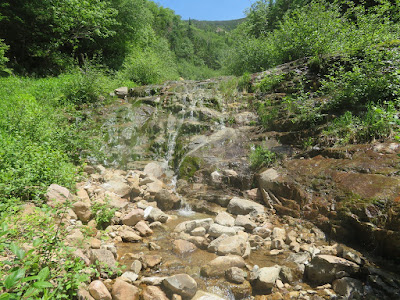 Stay off the slime! 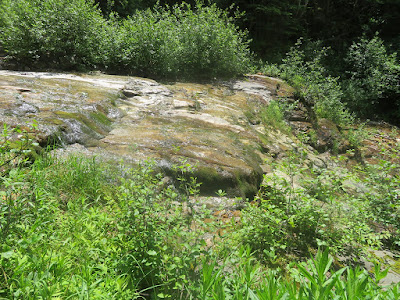 More ledges, with both Kinsmans in view. 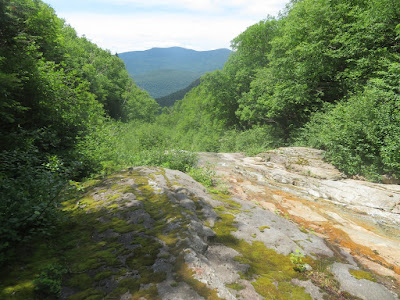 Focus on footing needed on this ledge, to stay on the dry rock patches. 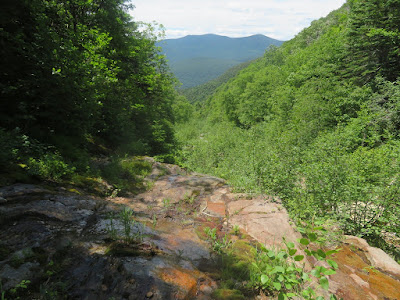 After the ledgy section came a long stretch of rock-hopping up the brookbed/slide runout. 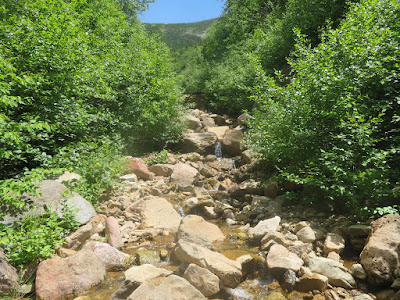 I came across several patches of mountain sandwort, a hardy and common flower in the alpine zone. 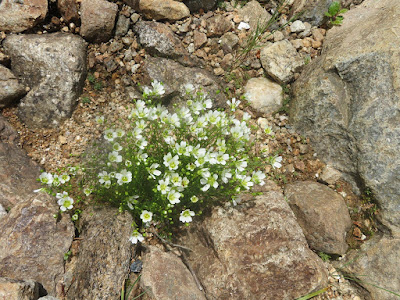 Looking back down the brookbed/slide runout. I knew it would take some time to carefully hop the rocks going downhill. 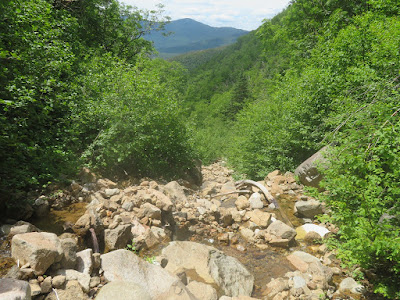 At ~3400 ft. I reached the base of the first slide, on the right (south) side of the ravine. From a study of old photos and postcards, my guess is this slide may have fallen during the 1938 hurricane or in a 1948 storm that triggered a slide that ran across Route 3 in the notch. 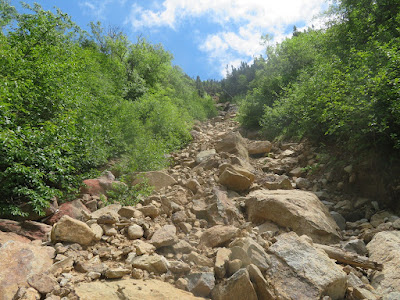 After scrambling a little ways up, I concluded that this was one of the ugliest slides I've been to, with many loose sizeable rocks. I shelved my plan to climb high up on this slide and made a U-turn. The footing was too sketchy. 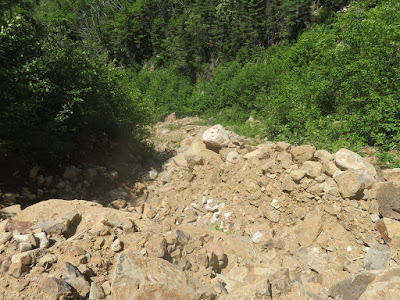 And the view was limited, mainly looking across at the ridge that divides the two forks of Walker Brook. 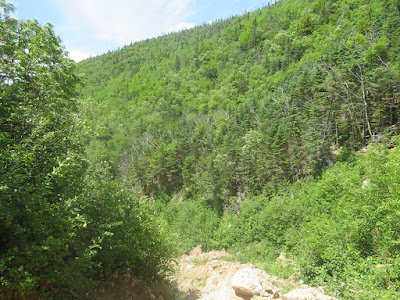 I returned to the brookbed and continued up, soon coming to this boulder cascade. I attempted to climb up it, but the key foothold was too slippery. In the process my camera case got wet, and presumably the camera did, too. 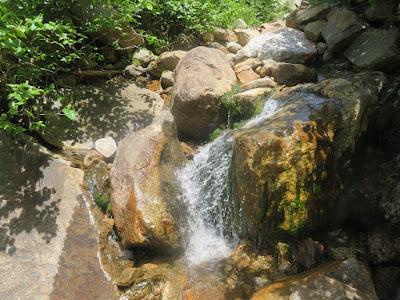 Before taking to the clinging alders to bypass the cascade, I took this picture looking back with a glimpse of the Old Bridle Path view ledges. As I continued up the brook above the bypass, I discovered that my camera had given up the ghost; perhaps it somehow got shorted out by the soaking. It was getting near my turnaround time anyway, so at ~3500 ft., 150 ft. shy of the second slide, I took a break and then turned around for the long, slow trip back down the ravine. In the future I may try a route using old logging roads up on the ridge to access the second slide. 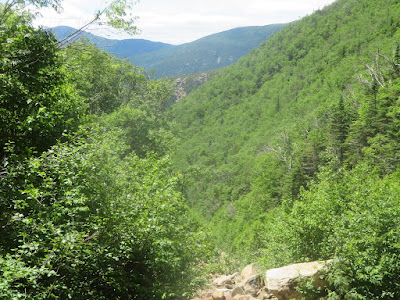