On a sunny summerlike day I enjoyed a varied ramble in the fine backcountry NE of Waterville Valley. Highlights included forest rambling both gentle and steep, views from The Scaur and along Irene's Path, a stop at the Waterville Flume, and a bushwhack to a "lost" cascade. I also snagged three rather challenging geocaches recently placed by my wife,  NHDaylily.

When heading up Livermore Trail, I usually make a quick stop to see The Boulder in Slide Brook. One of the geocaches is near here. 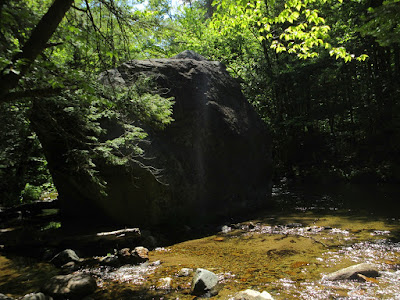 From Livermore Trail I headed up the Kettles Path, a longtime favorite that features good footing, lovely forest, and the three glacial hollows for which it was named. This huge white ash is one of the landmarks along the way. 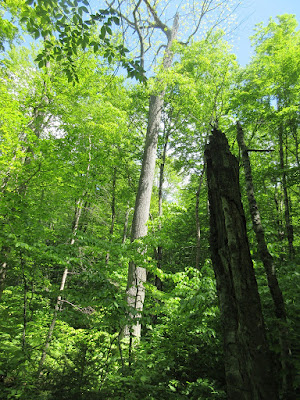 The rock outlook known as The Scaur, which is reached by a burst of steep climbing at the top of the Kettles Path, is one of our favorite short-hike destinations. 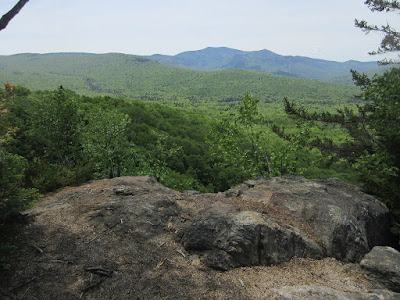 Sandwich Dome and the sharp nubble of Jennings Peak loom large across the valley to the south. 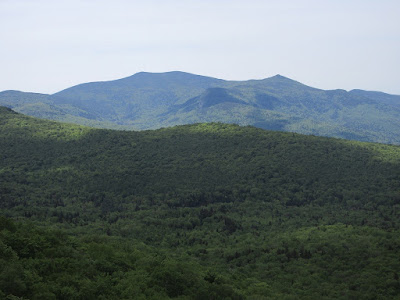 Middle and South Tripyramid are seen over the trees to the east. 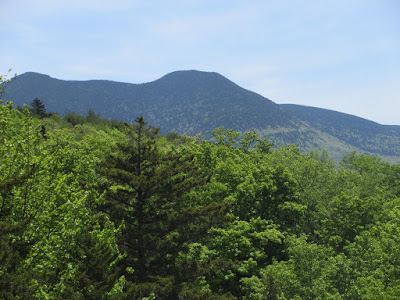 Mt. Tecumseh, with the new Green Peak ski trails seen on the left. 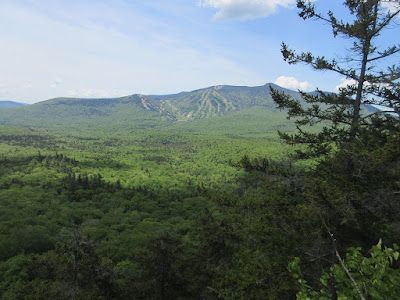 A huge prow-like rock rises in the forest along Irene's Path. This delightful trail was opened in 2014, replacing the Flume Brook Trail, which was closed after it sustained severe washouts during Tropical Storm Irene in 2011. 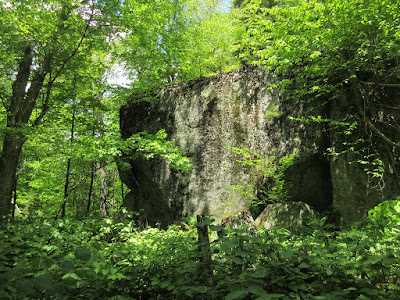 Irene's Path provides an enjoyable half-mile trek along the wooded Scaur Ridge before dropping into the Flume Brook valley. This was the first time I traversed Irene's Path in its summer lushness. 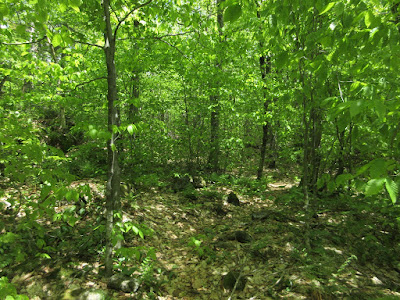 Impressive rock work on Irene's Path, constructed by the Off the Beaten Path pro crew. 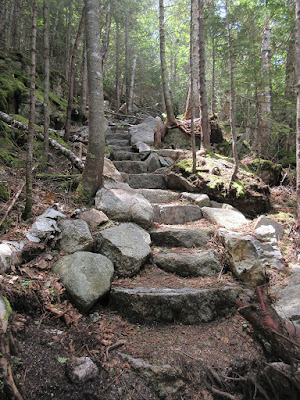 Partway down towards the Waterville Flume, Irene's Path offers a unique vista looking north into Mad River Notch. This has become one of my favorite views. 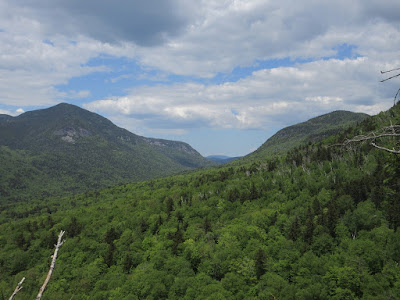 There's a great look at the Osceolas here. 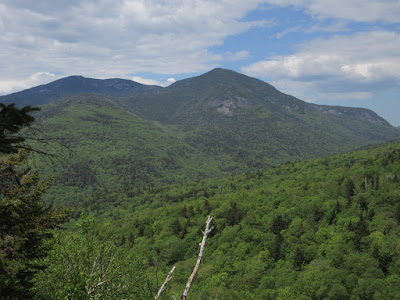 From this spot you look directly across the valley to the wild Painted Cliff on East Osceola. 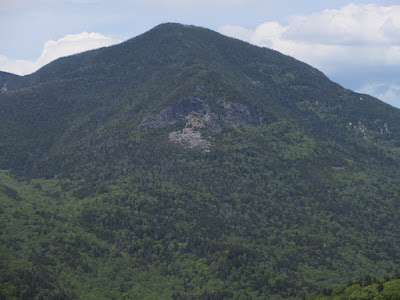 Fresh greenery on the floor of the Flume Brook valley. 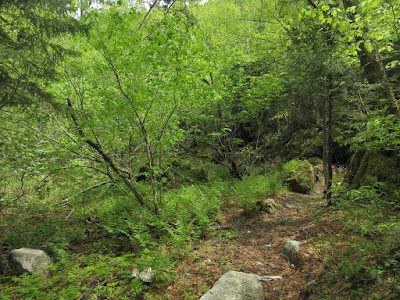 Mosses thrive in this cool microclimate. 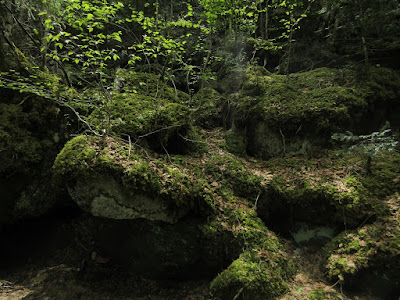 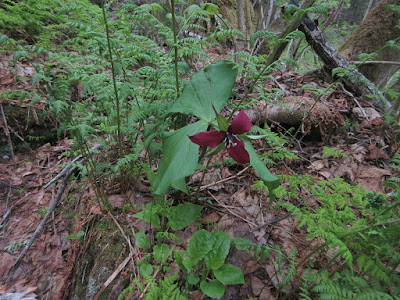 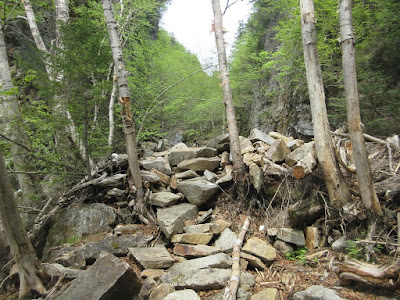 Looking up through the Flume. The path that once ran along the right edge was swept away by the floodwaters of Irene. 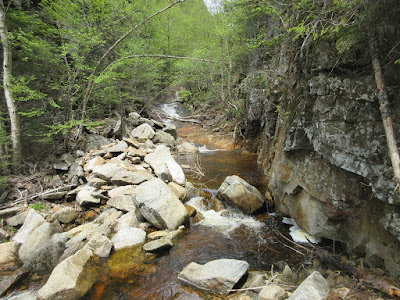 The cascade at the head of the Flume. 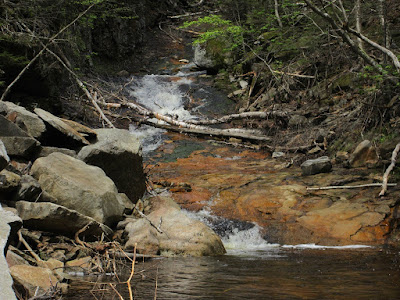 A fractured rock wall towers on the north side of the Flume. 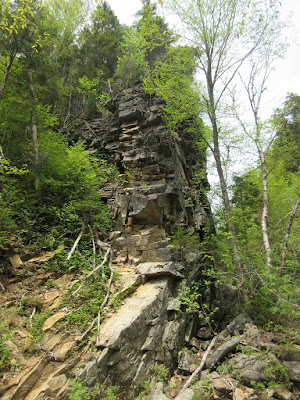 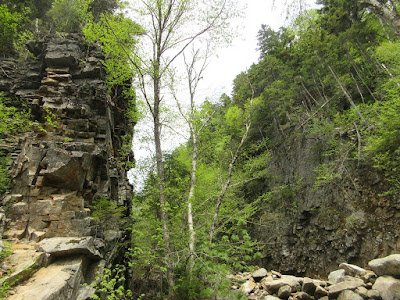 There is much damage from Irene visible downstream. 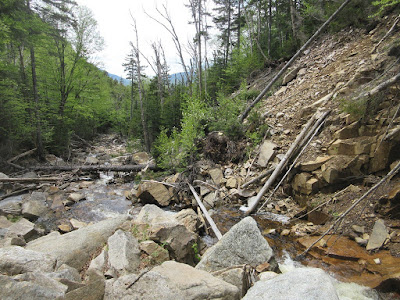 The Old Skidder Trail is another interesting route in this area. In its lower part it passes beneath this stark rock slab. 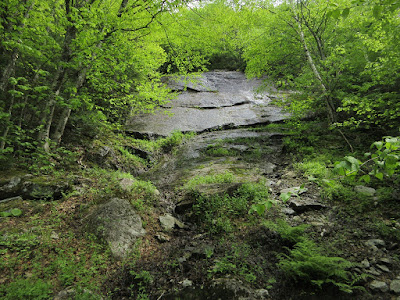 After visiting the Flume, I bushwhacked to the Green Cascade higher up on Flume Brook.This cascade was briefly mentioned in the 1892 and 1904 editions of A.L. Goodrich's guidebook to Waterville Valley, and was shown on the accompanying map. Guarded by dense conifer forest, it is not an easy place to find or get to, and I placed my footsteps carefully both for safety (dangerous holes) and to minimize impact on the mossy forest floor. 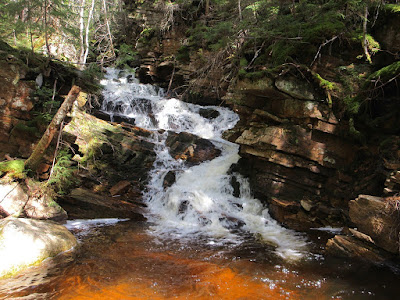 A bear tree on the way back along Irene's Path. 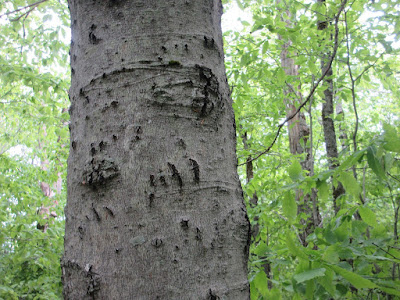 A weathered rootball, location of an older NHDaylily geocache. 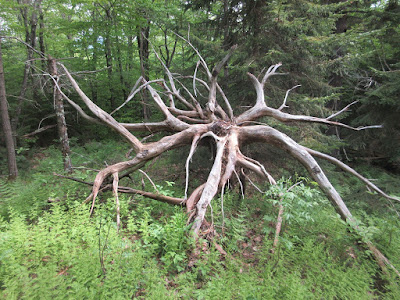 A rock with a topknot, in a field of ferns. 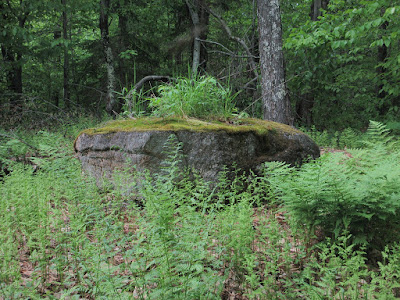