A bright sunny day found me wandering through the new snow to a couple of neat spots on the steep flank of East Osceola.
It was a gorgeous day to be in the woods, just a 10-minute drive from home. 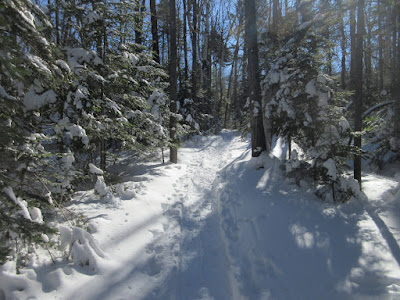 Snow bridges are back! This one on the South Fork of Hancock Branch on Greeley Ponds Trail. 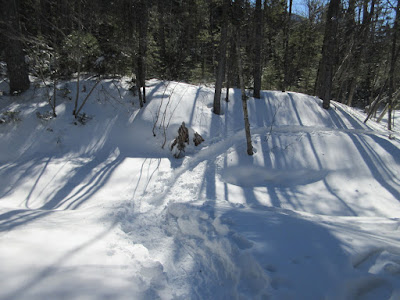 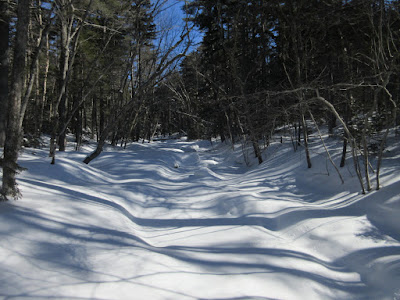 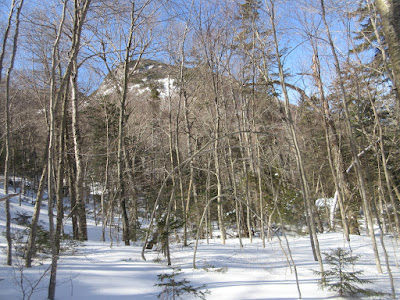 Kudos to those who laid down this nice snowshoe track. Unfortunately it was badly chopped up by barebooters in the afternoon. 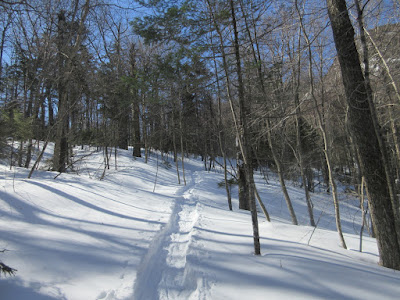 I always enjoy this bright hardwood glade heading up the Mount Osceola Trail. 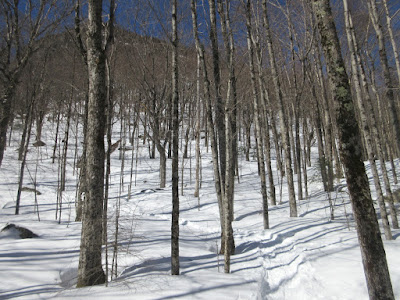 A peek at the great cliffs on the NE spur. 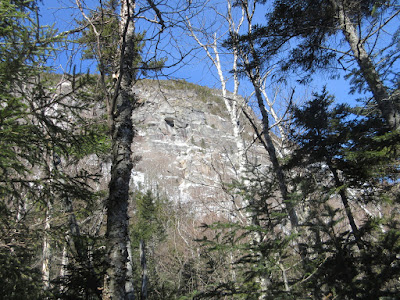 I leapfrogged with a father and son just out for a hike, not for bagging a peak. 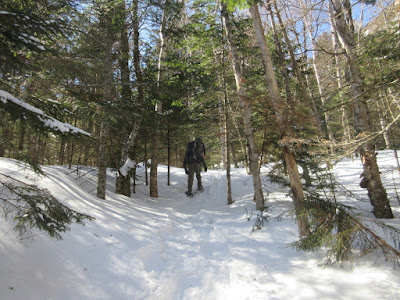 The track was very choppy on the steep section of Mount Osceola Trail. 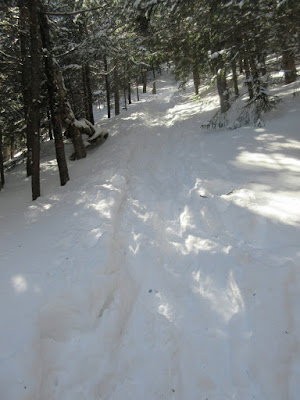 I went up the steep section of the Mt. O. Trail as far as this big iced-over rock slab at 3350 ft., right next to the trail. It's a continuation of the old (1892) slide the trail crosses above at 3700 ft. In winter you can sometimes get out on the edge, and the conditions were good for that today.The father and son followed my detour. They continued a little farther up the trail above, then turned around as the going got too tricky without crampons (they had snowshoes and Microspikes).

Click here for an interesting account of a harrowing climb up this slide shortly after it fell. 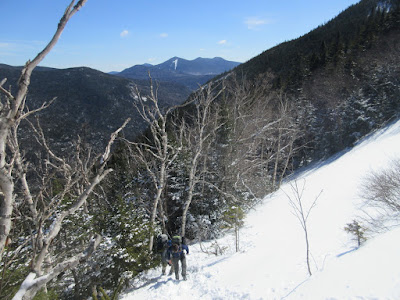 I sat on my pack in the sun at the edge of the slab for more than an hour. 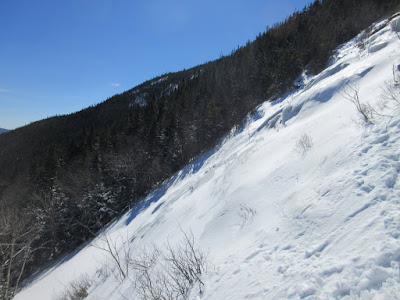 You look at the Tripyramids across the slab. 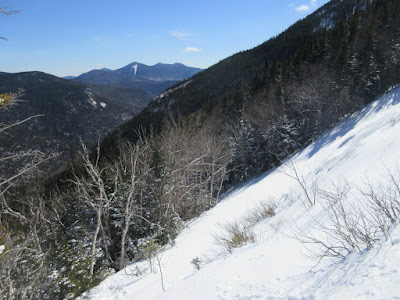 Standing and looking over the trees I could see Mount Carrigain and distant Carter Dome. 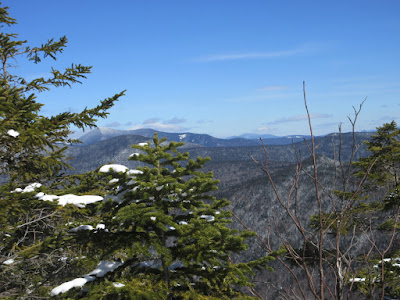 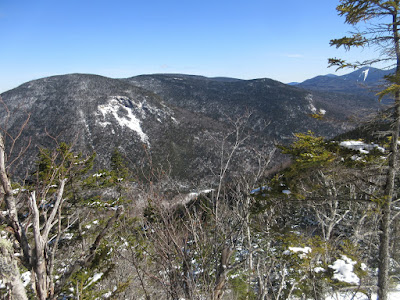 The overhanging "K1 Cliff" on the SW ridge of Kancamagus, once reached by a rough trail. Beyond are Mt. Paugus, Scaur Peak and Mt. Passaconaway. 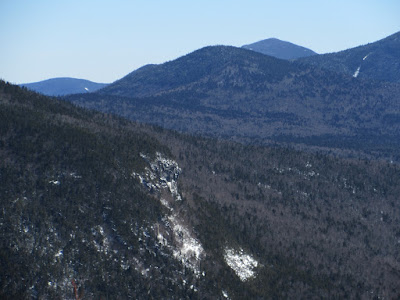 Because the steep part of the Mt. Osceola Trail was so chewed up and unpleasant, I bagged the idea of going up to East Osceola and headed back down, making a short side trip to look at the long-overgrown track of the old slide. 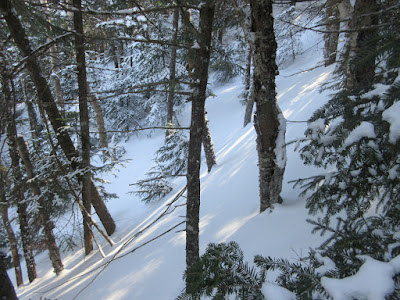 Partway back down the trail I bushwhacked across a steep sidehill to the base of the cliffs on the NE spur. 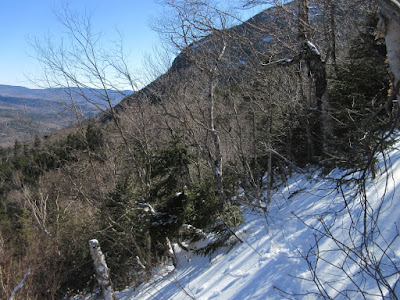 I got a preliminary look at the cliffs from this scrubby spot. 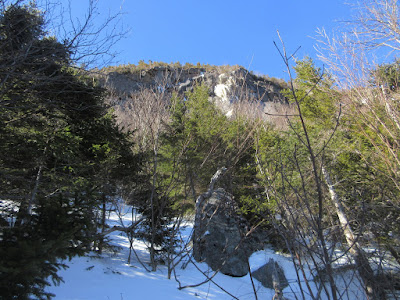 Farther across and up I found some good views, including the K2 Cliff on Mount Kancamagus across the way. 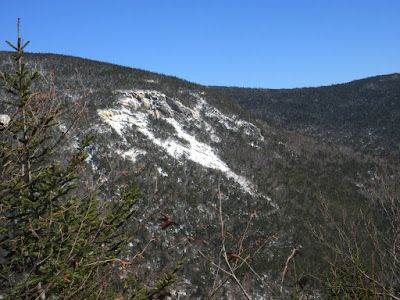 And a nice view south down through Mad River Notch. 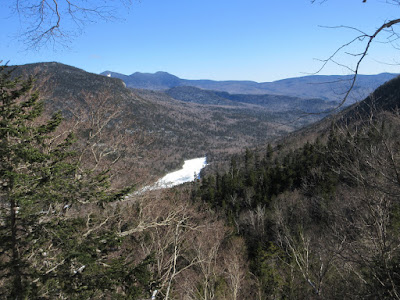 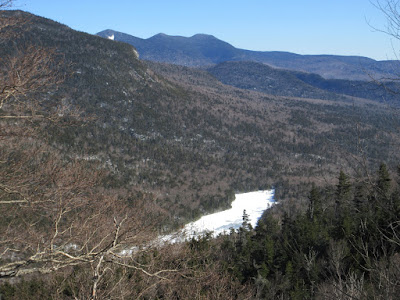 Tripyramid behind the K1 Cliff. 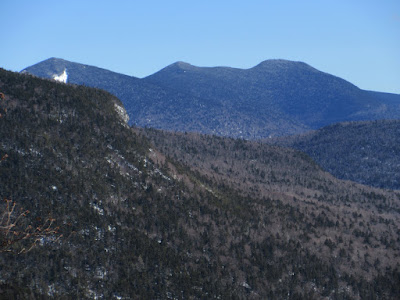 A stark late winter scene at the base of the cliffs. 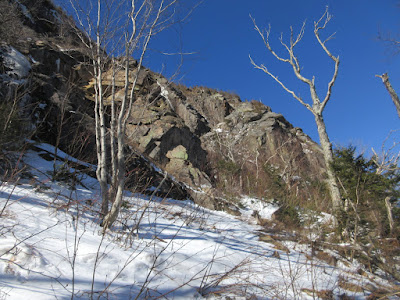 This was as close as I got, as the terrain was a little sketchy for snowshoes. 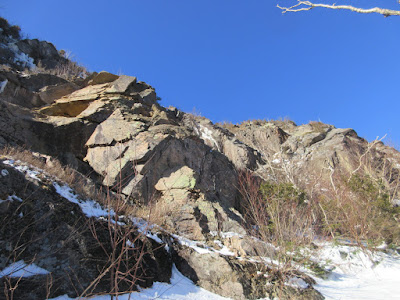 More cliffs along the band to the SW. 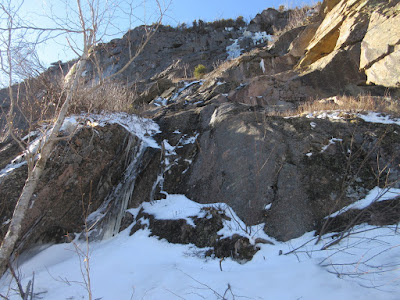 Rocks and gnarled old hardwoods on a slope above the trail in Mad River Notch. 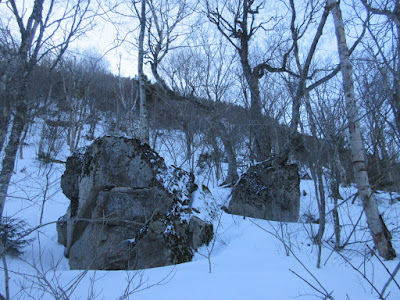