Despite a forecast for a partly sunny day, dreary skies prevailed in the morning, and I cancelled a plan to climb Mt. Moosilauke. Plan B was a bushwhack off the Gorge Brook Trail to a remaining open patch on the southernmost slide on the west slope of Gorge Brook Ravine.

A series of slides on this slope fell, according to reports I've read, during the big rainstorm of November 1927. As shown in this Google Earth image from 1992, this particular slide is lower and farther south than the main series of slides.  (The largest one seen in the photo was the route of the DOC Gorge Brook Slide Trail, opened in 1968 and abandoned around 1980.)  The southern slide is now mostly revegetated except for a couple of small open patches near the top. Visiting this old slide has been on my wish list for a while. I decided to take the chance that the fog would lift enough to reveal a view from this spot. Alas, it was not to be on this day. 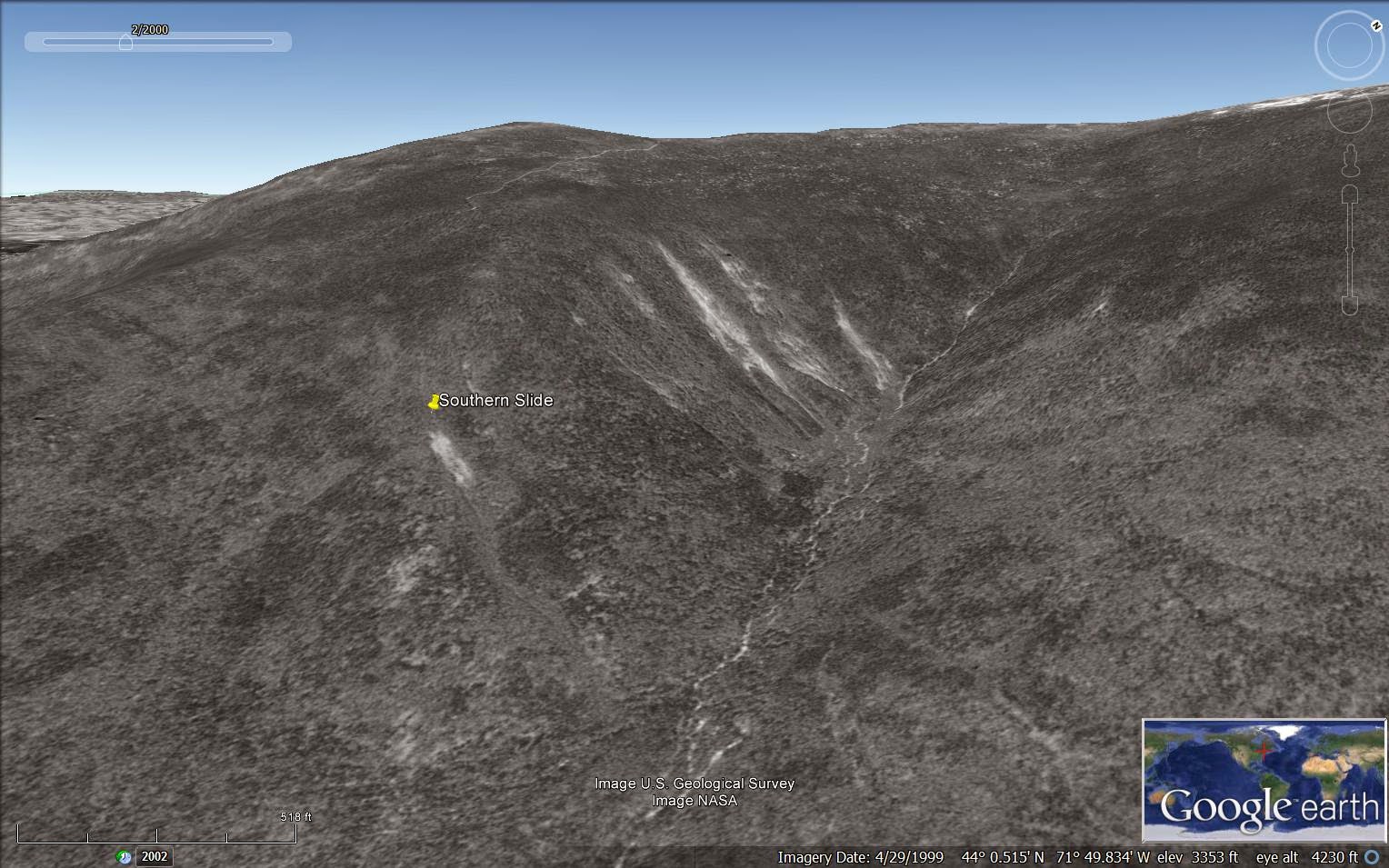 The hardwood branches were snow-coated on the 1.5 mile walk up the Ravine Lodge Road from Rt. 118. 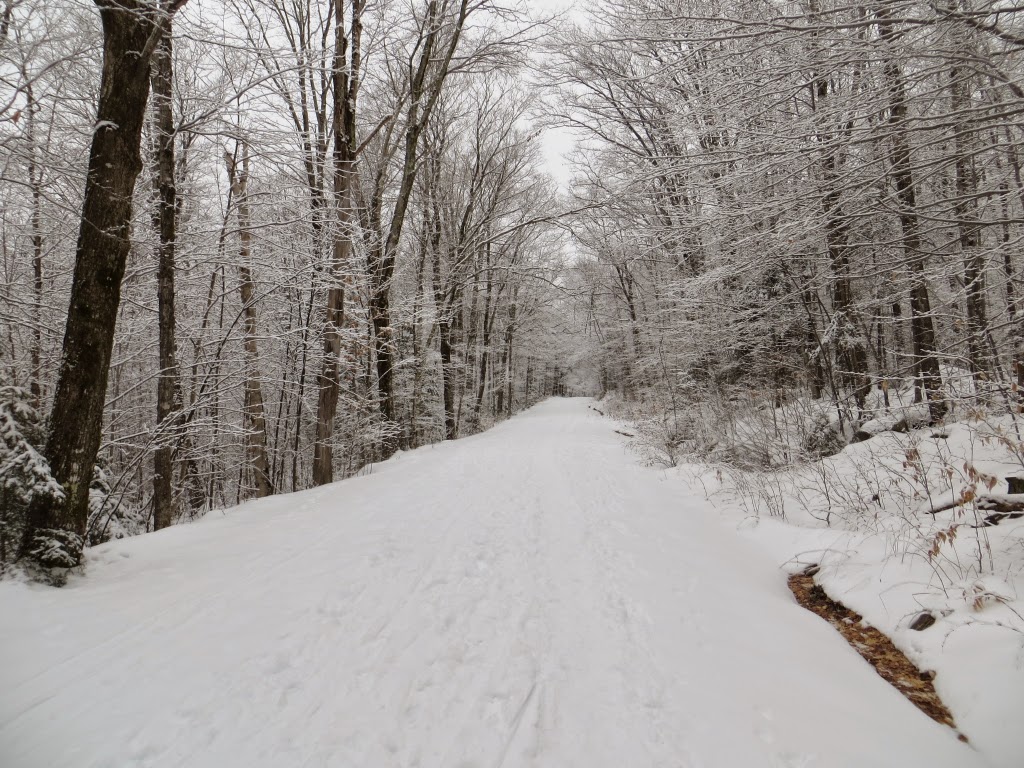 The new Dartmouth Class of '65 Bunkhouse is nearing completion. 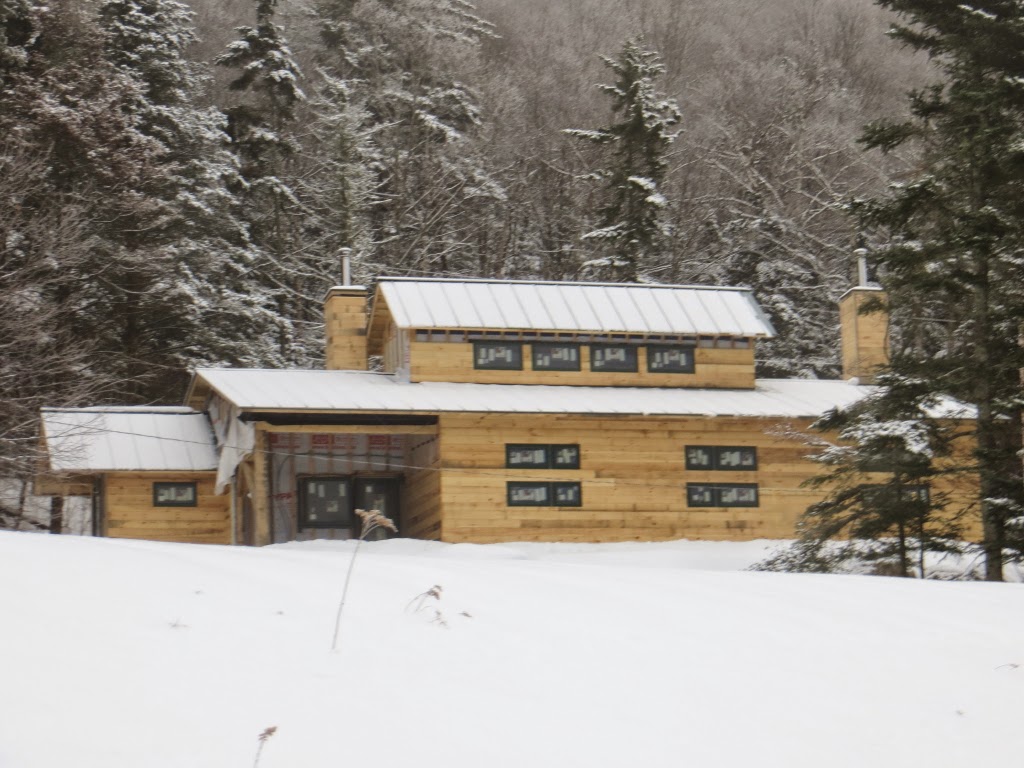 The Ravine Lodge is all buttoned up for the winter. Built in 1938, the beloved log structure is in need of major repair and different options for its future are being considered by Dartmouth. 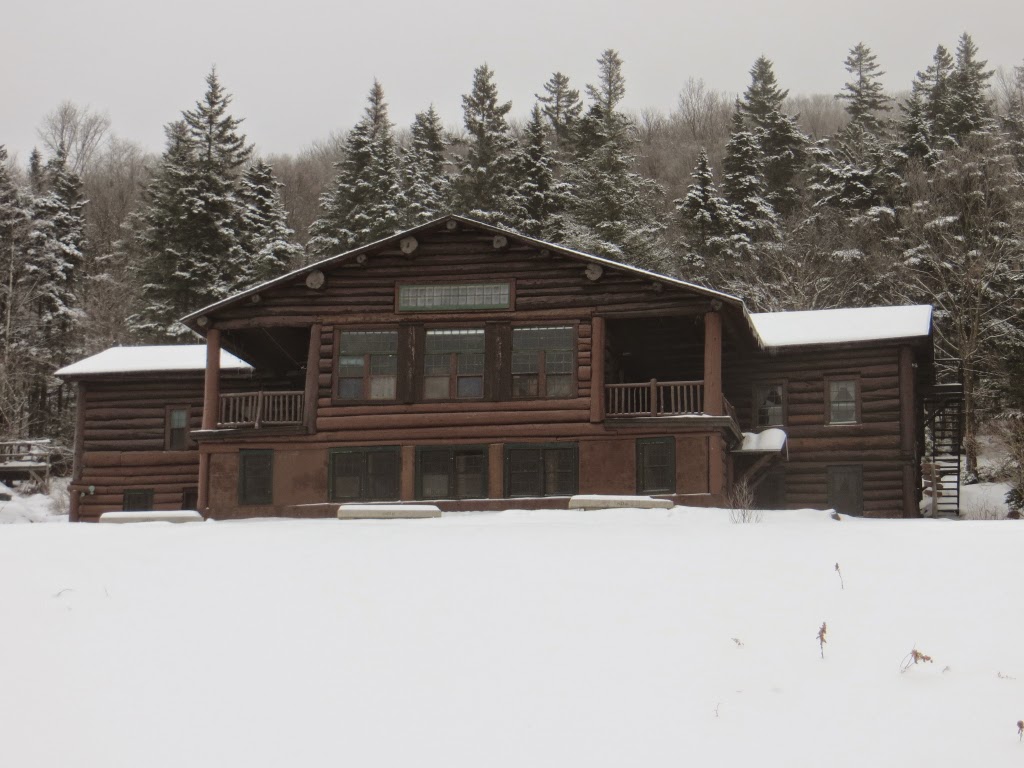 The Baker River from the footbridge on the Gorge Brook Trail. 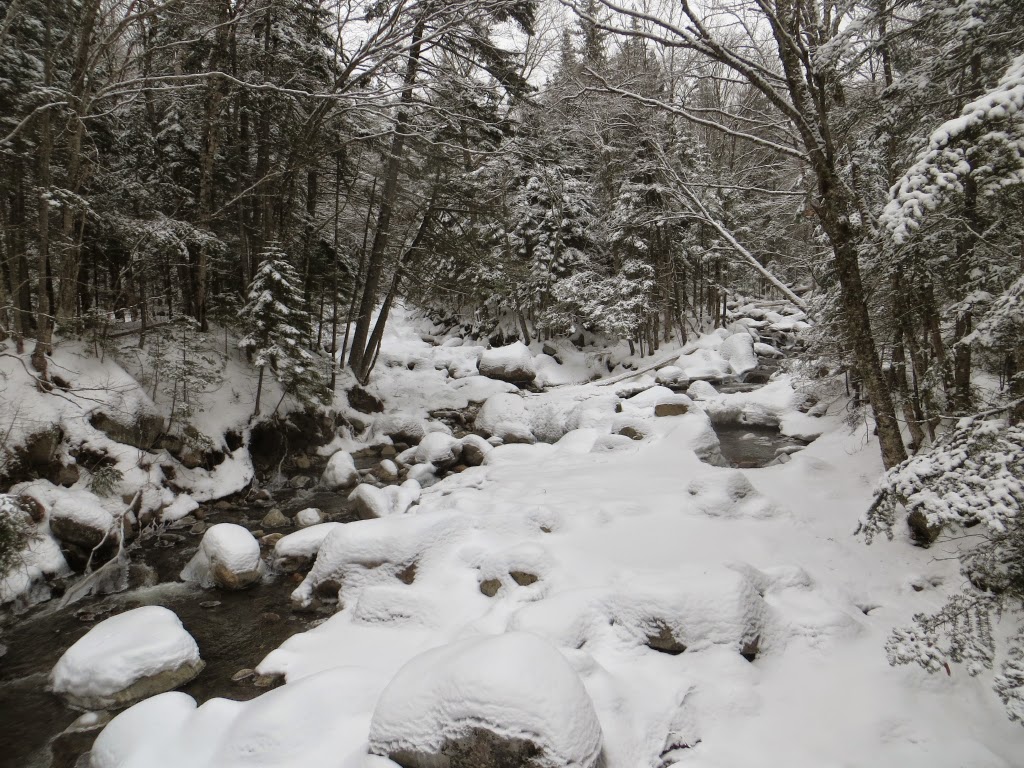 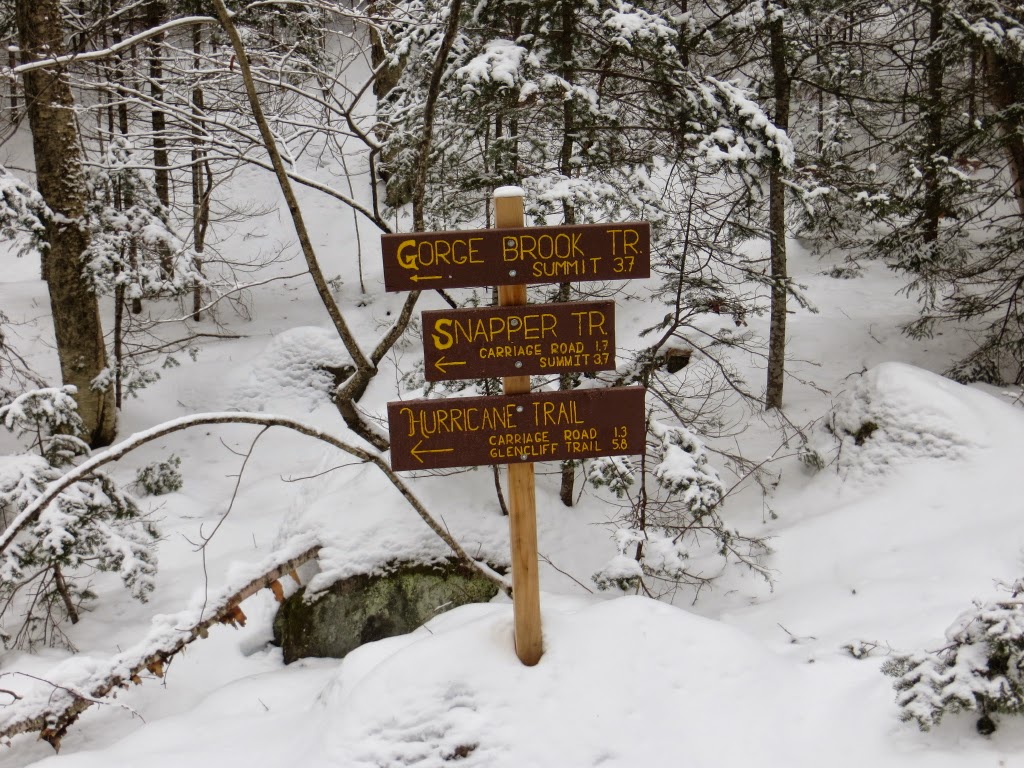 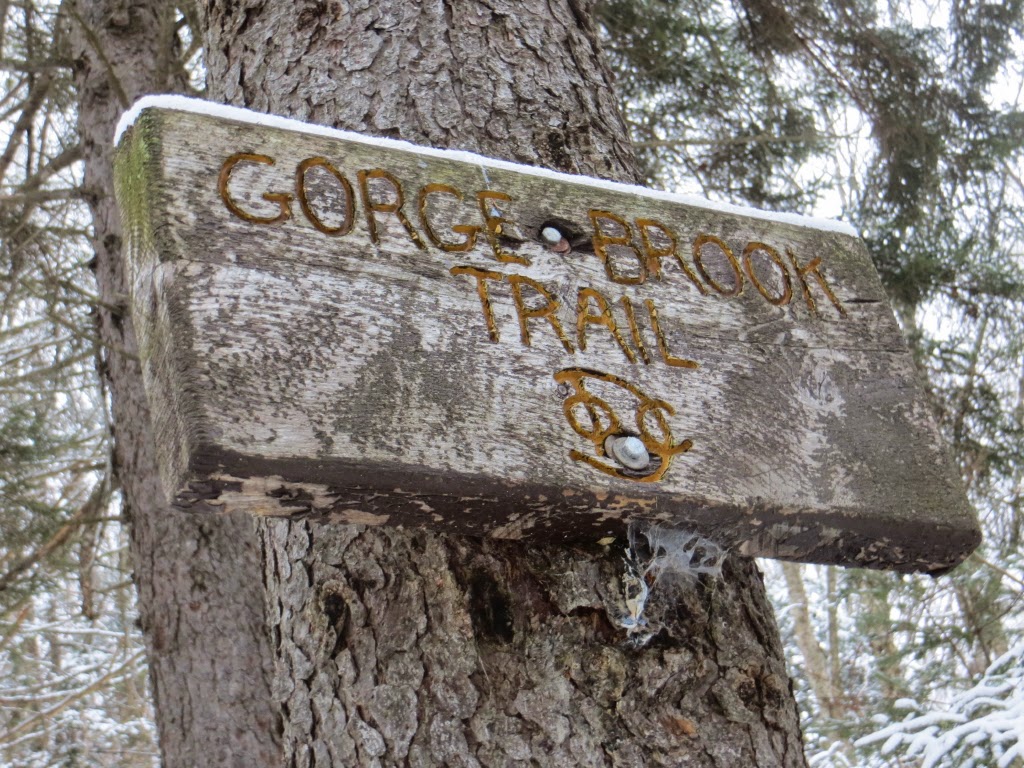 Gorge Brook from its first crossing on its namesake trail. 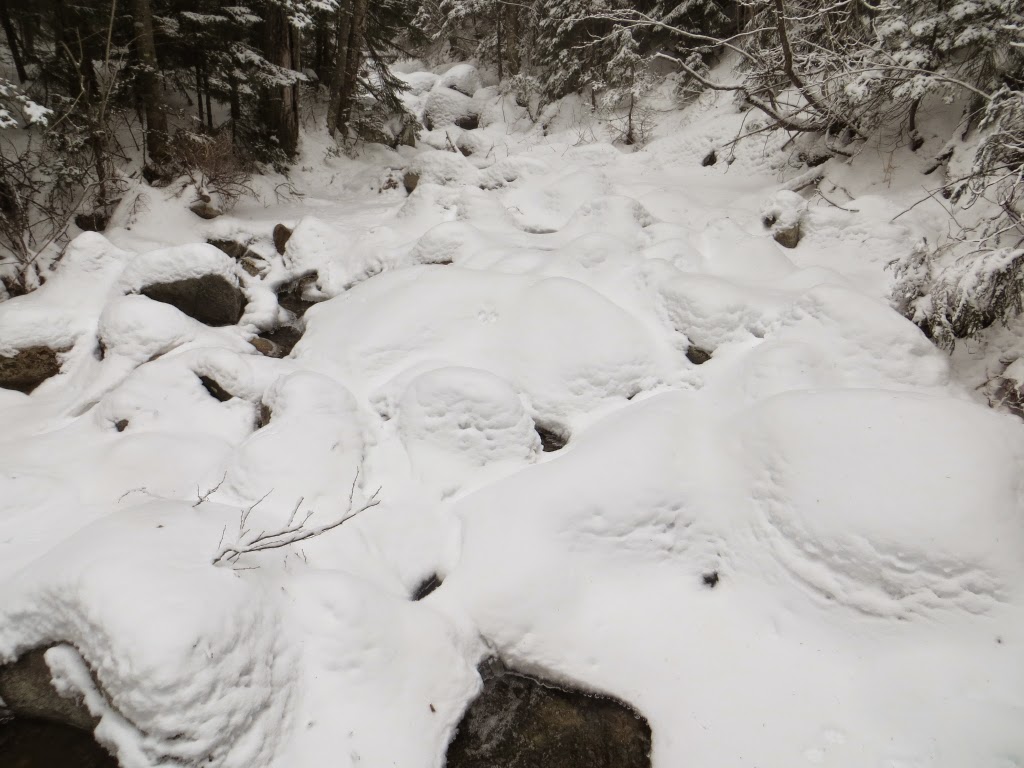 The start of the relocation cut by the DOC in 2012 after part of the original trail was washed out by Tropical Storm Irene. 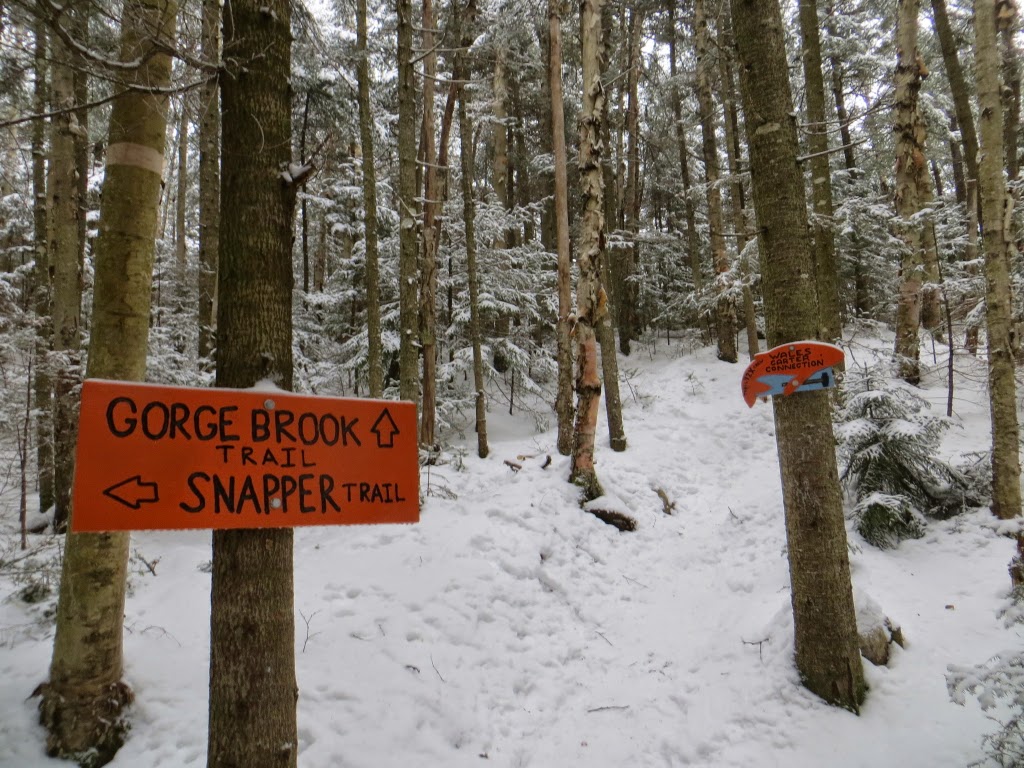 Gorge Brook at the second trail crossing, well up in the ravine. This was my launching point for the bushwhack to the slide, and also the point where the legendary Hell's Highway ski trail came down to the brook. 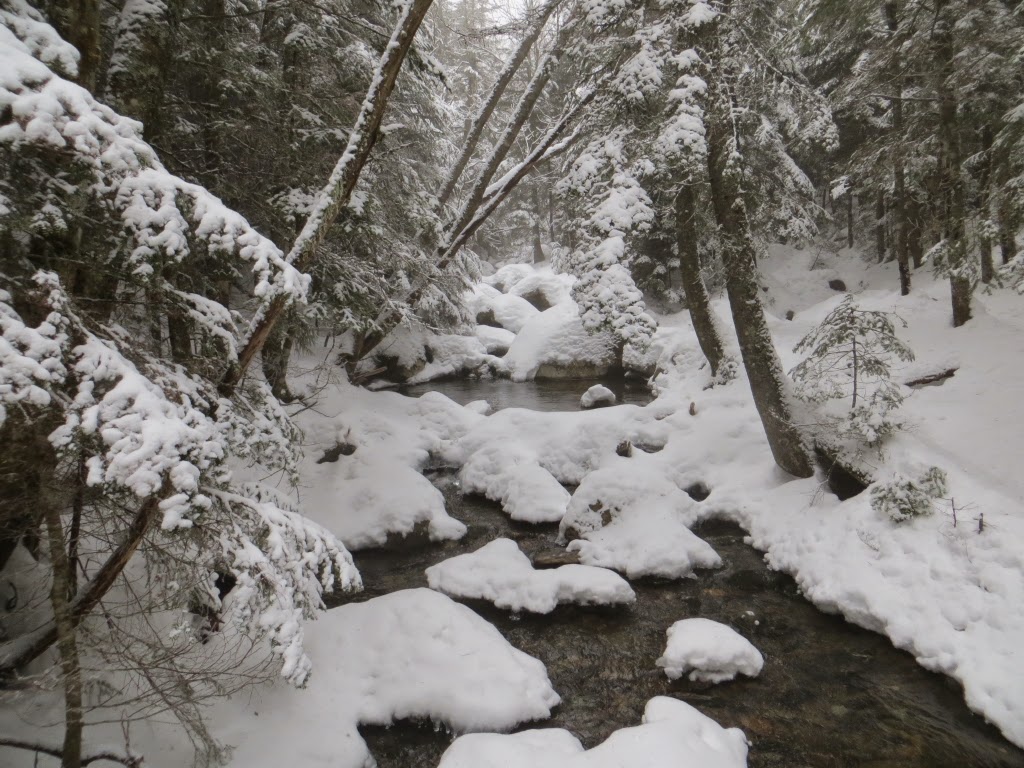 Most of the whack to the slide was through fairly open woods. 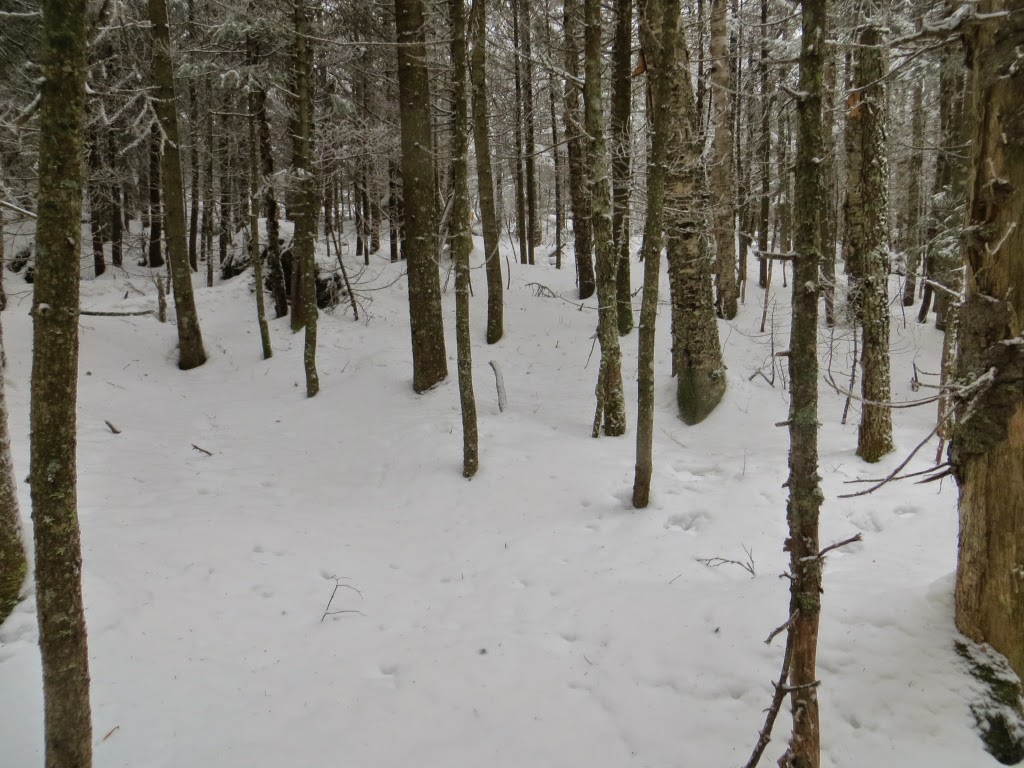 Part of the old slide track, down near the bottom. 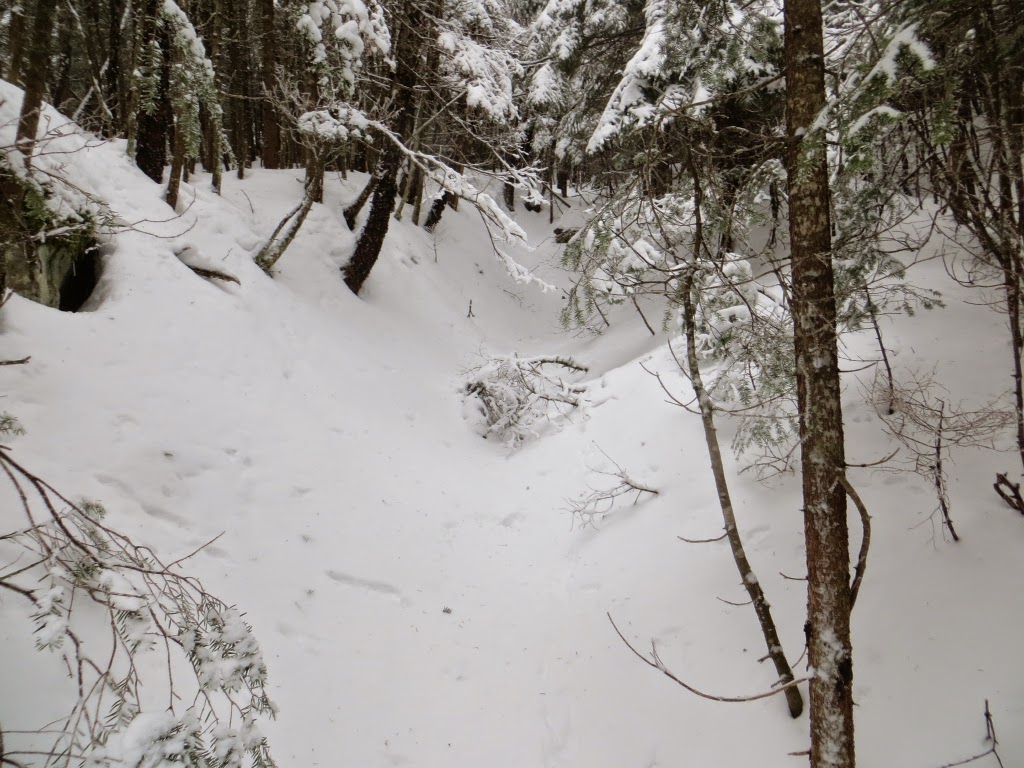 A semi-open patch on the slide, almost fully revegetated with small spruce and fir. 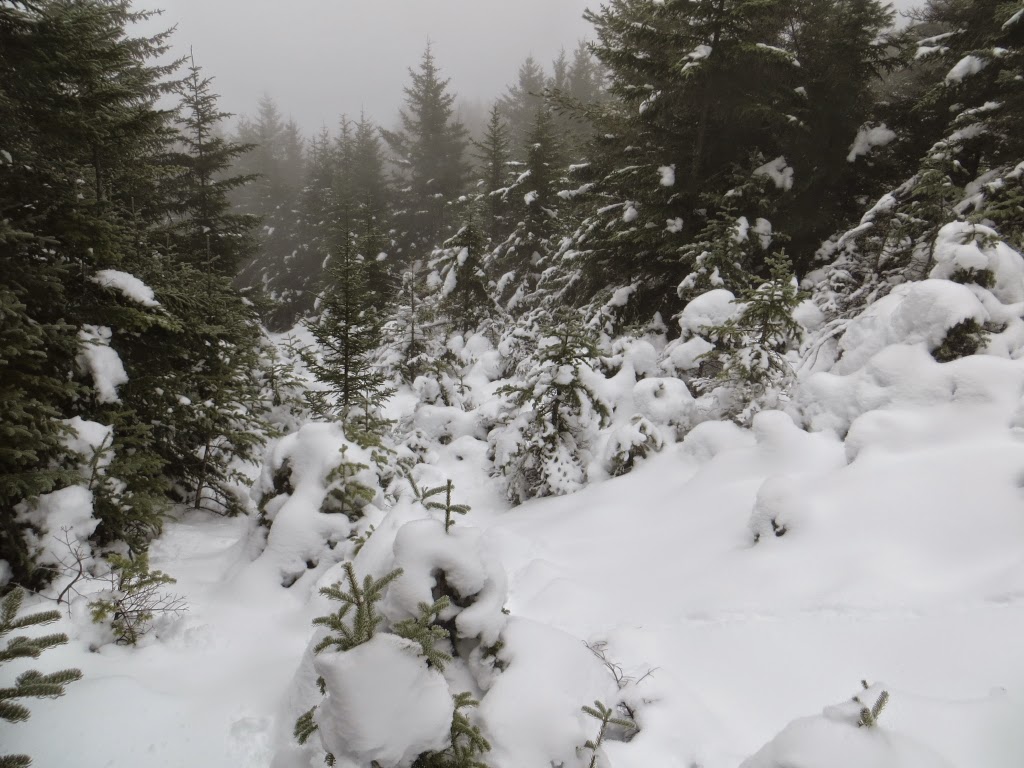 The upper open patch of the slide. 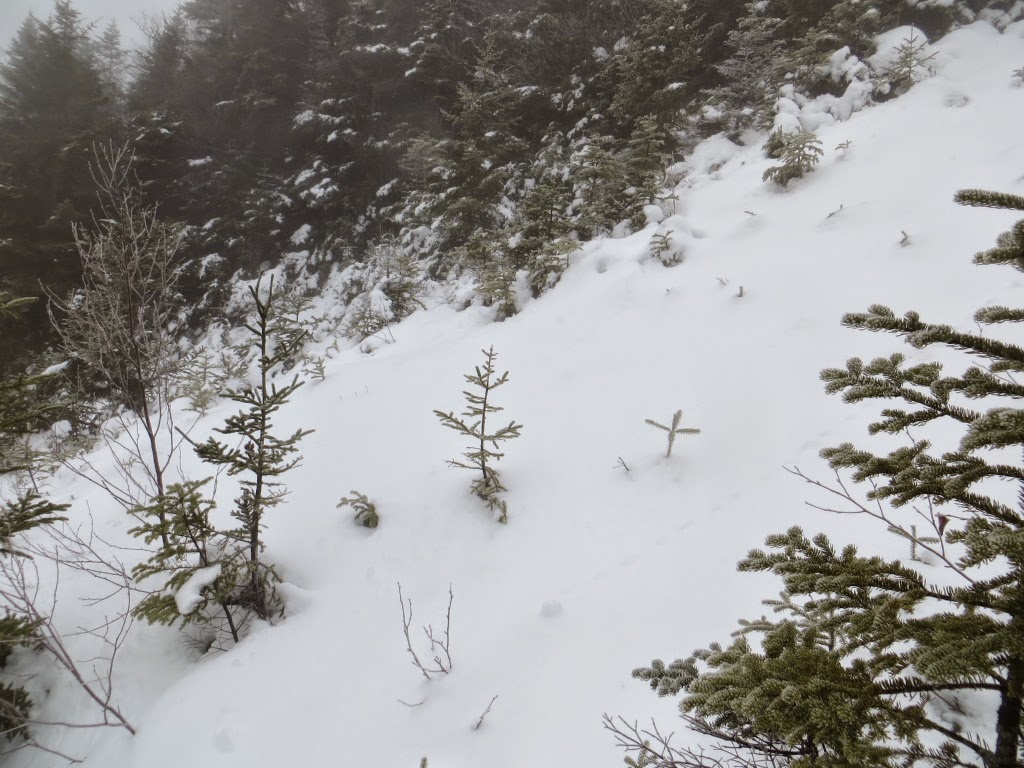 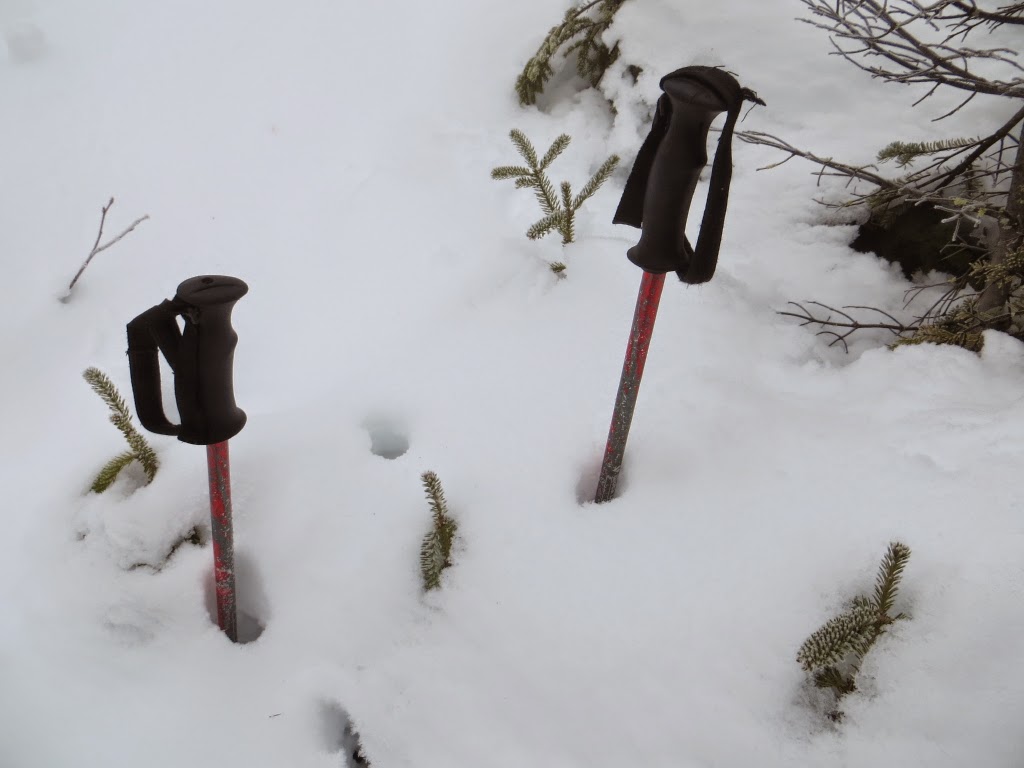 The track I pushed through the spruce traps. This was slow going, but short. 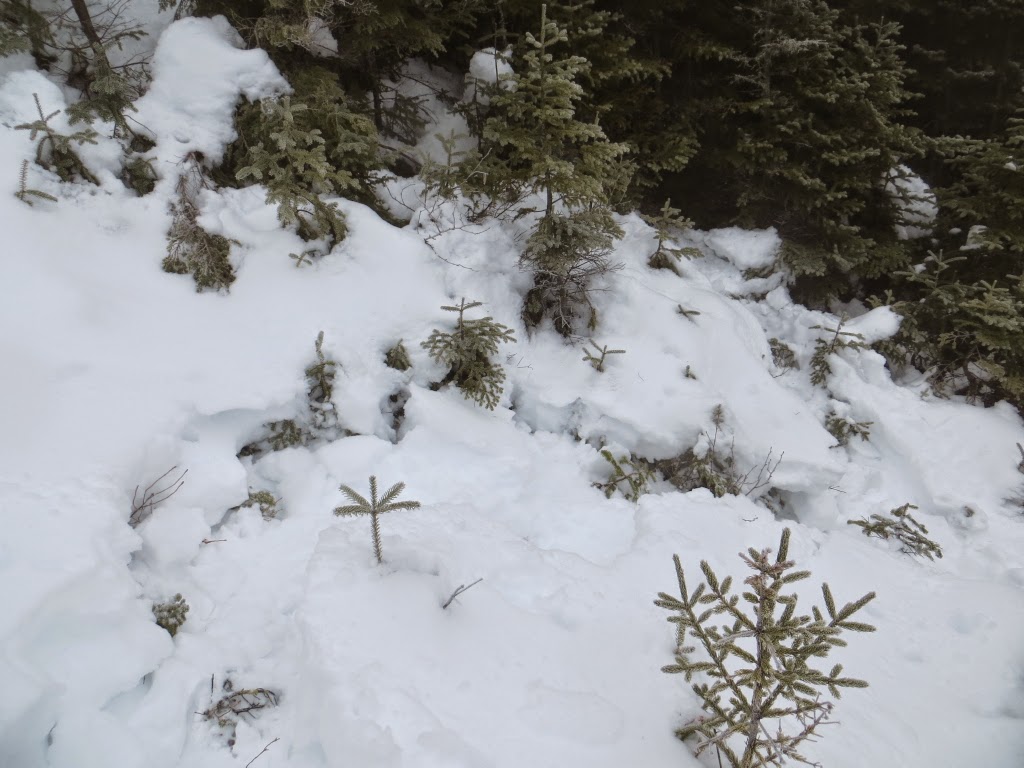 I hung out on the most open spot, hoping the persistent fog would lift for a view over the Gorge Brook valley. 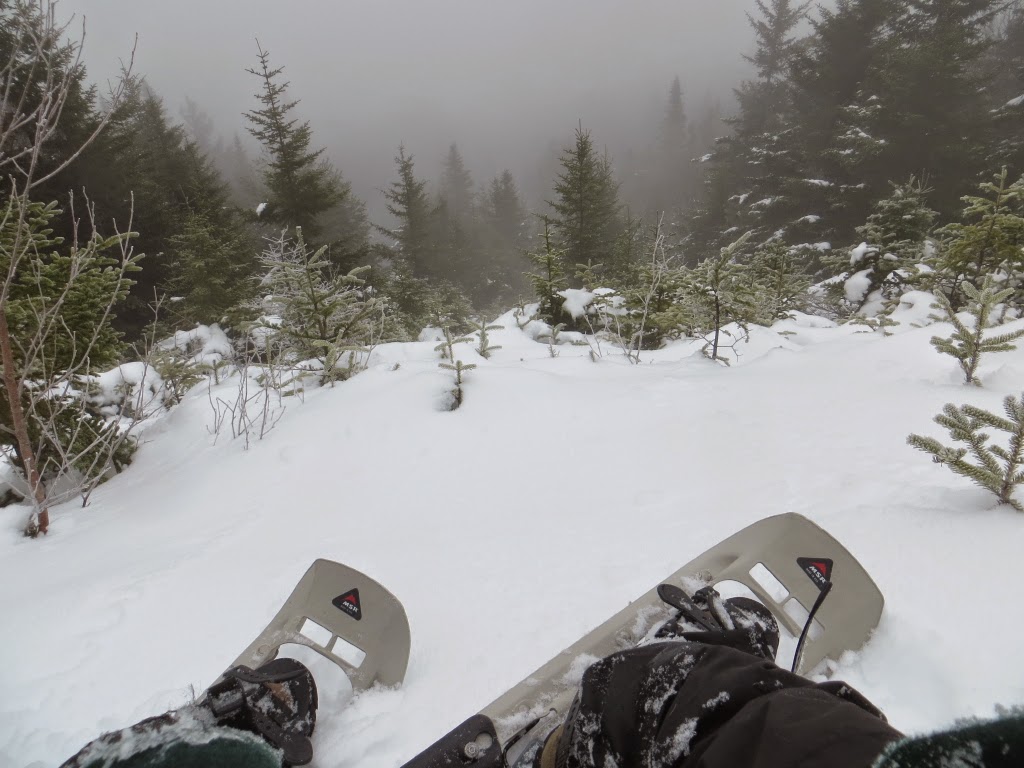 There were a few tease of blue overhead. Would there have been undercast views on the summit of Moosilauke? Possibly, but views were reportedly minimal on Liberty/Flume and Cannon this day. 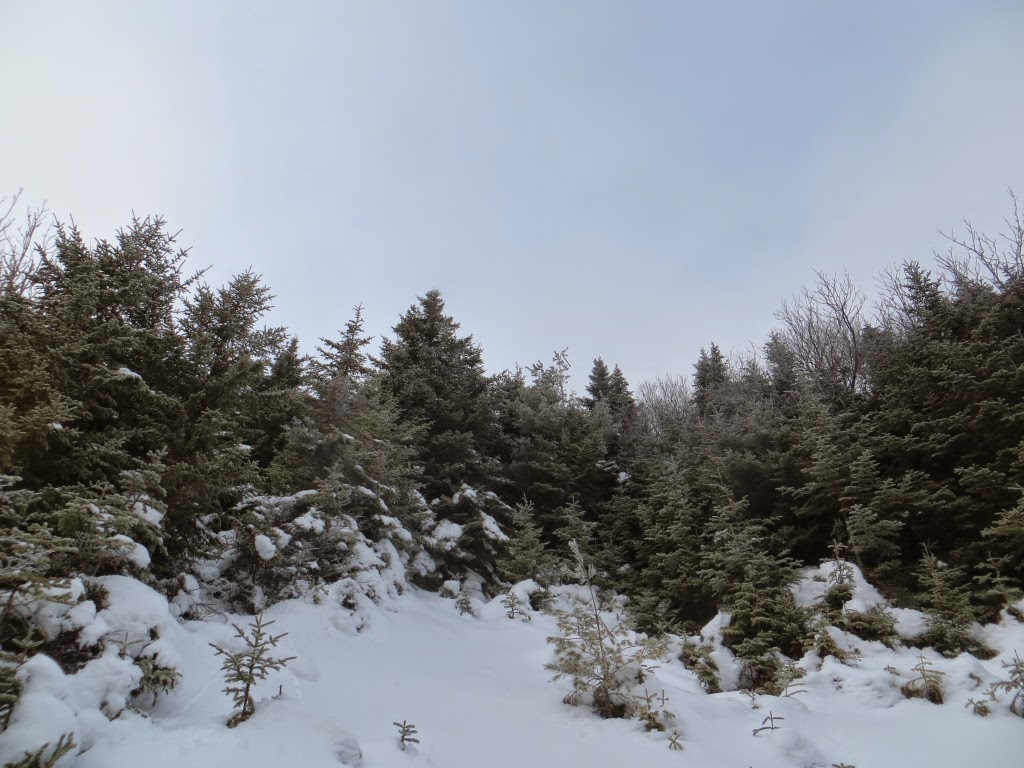 The fog briefly parted for a hint of the view over the valley. I'll have to return on a better day to see what the full vista is like. 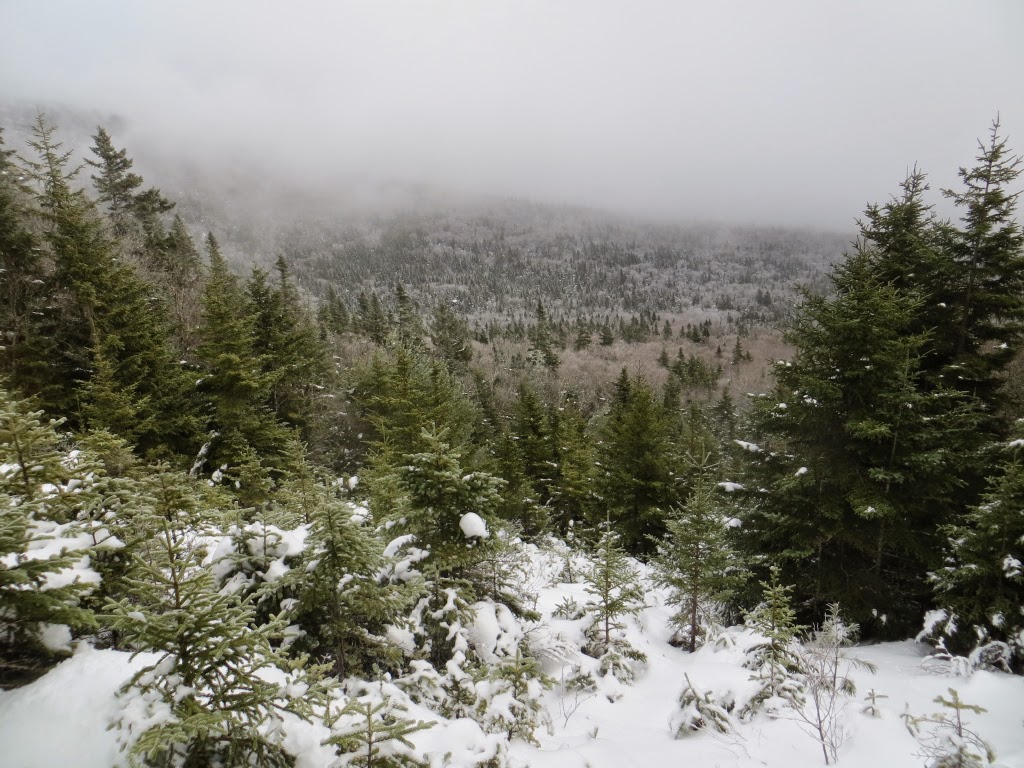 Looking back up the Gorge Brook Trail. 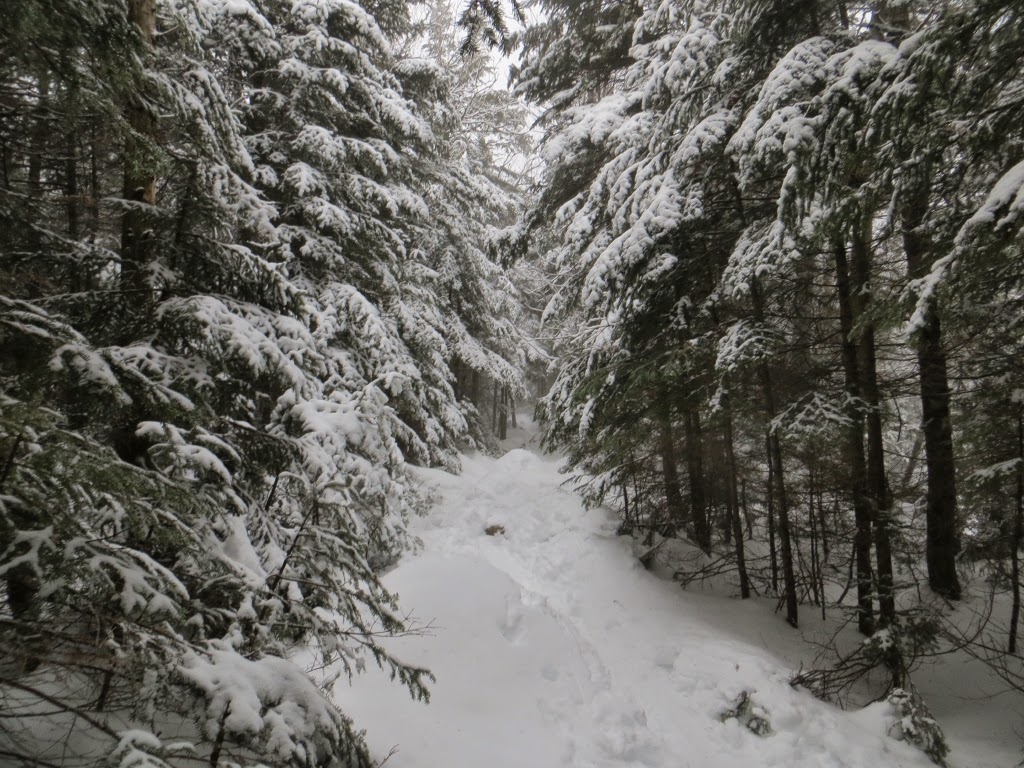 The Class of '97 Swimhole on the Baker River, reached by a side path off the Gorge Brook Trail. 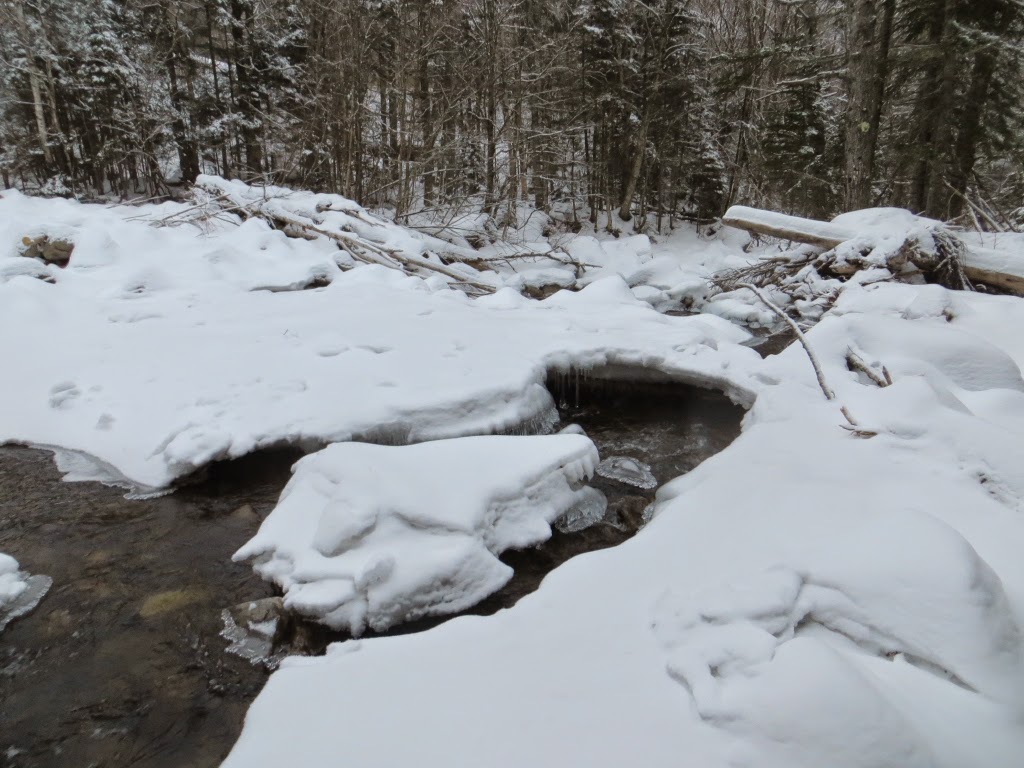 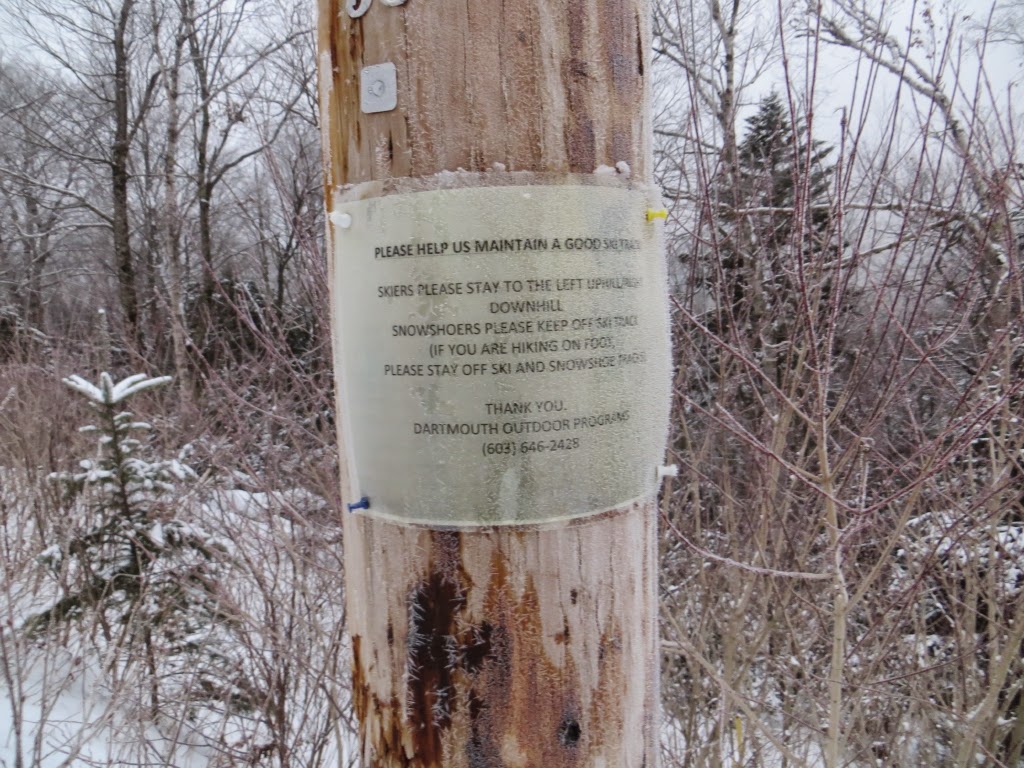