After a morning meeting in Randolph, took an afternoon/evening hike up the Israel Ridge Path to two favorite spots in the Northern Presidentials: the open slabs of the Second Cascade on Cascade Brook and the spectacular perch at Emerald Bluff overlooking Castle Ravine. The Castle Ravine area is a wild, lightly-trodden corner of the Presys; I saw no one on the hike except for an AMC service project trail crew low down on the Castle Trail.

From the trailhead for the Castle Trail at Bowman you get a fine view of Mt. Jefferson, Castle  Ravine and the Castellated Ridge. 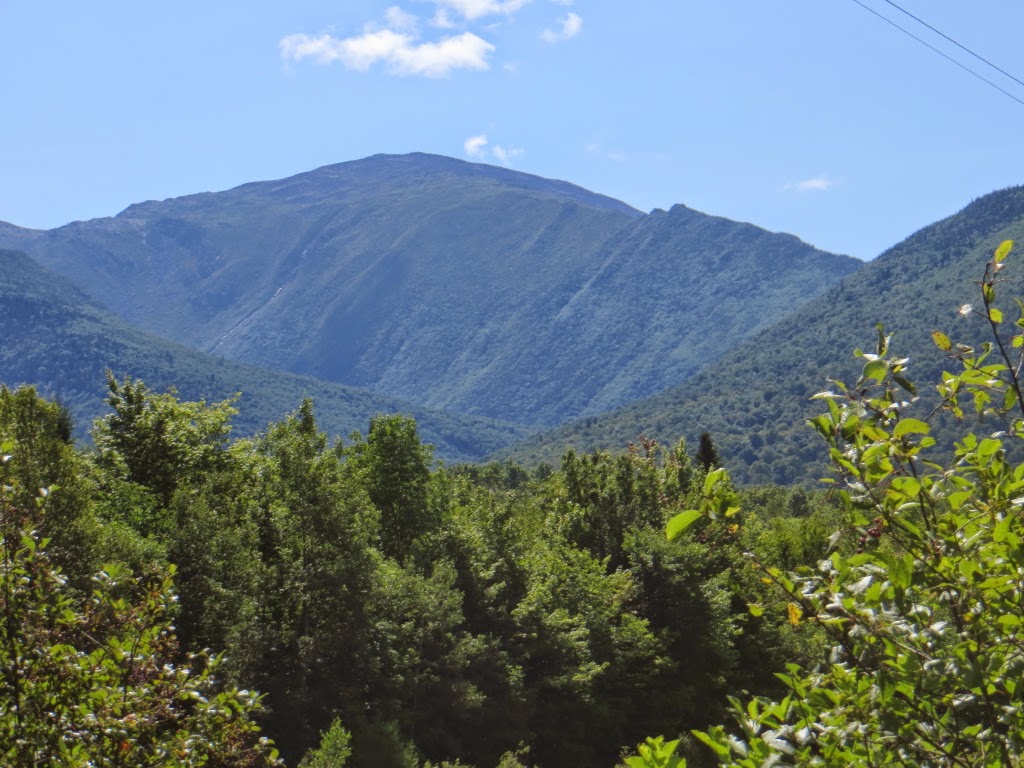 After crossing the Israel River on rocks just placed by the service project crew, I strolled up the lower part of the Castle Trail through a nice hardwood forest. 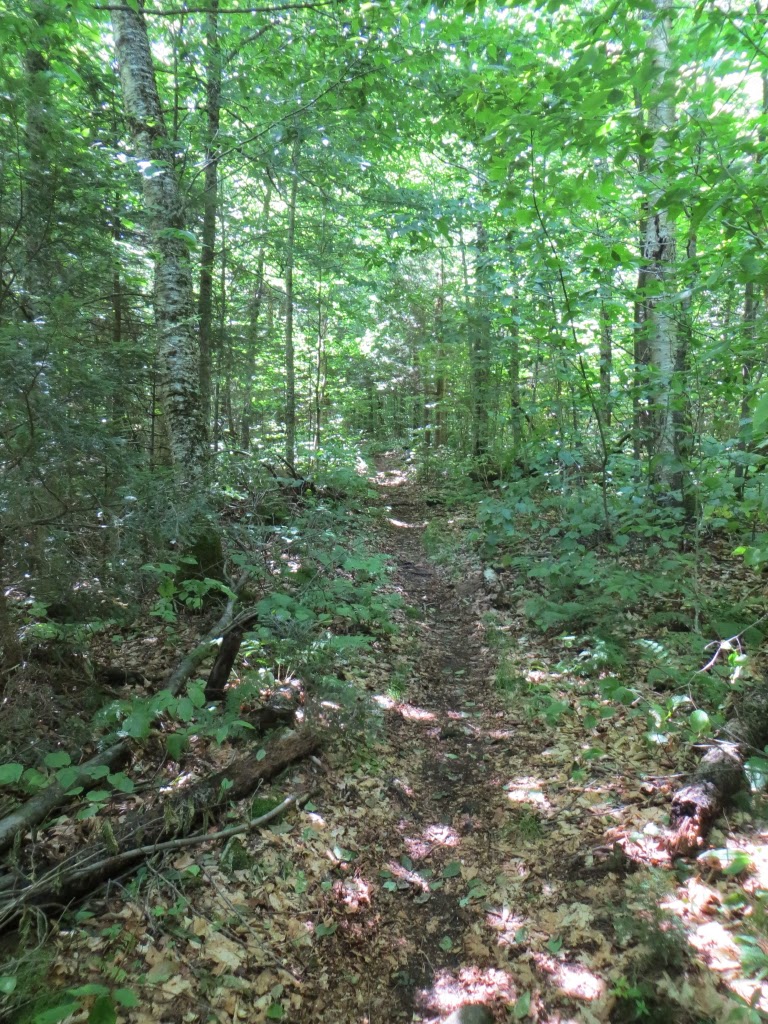 After turning onto Israel Ridge Path there was another crossing of Israel River. The flow was surprisingly strong for late summer, convincing me to skip the loop approach up Castle Ravine Trail, which has a series of tricky stream crossings using slippery rocks at awkward angles. 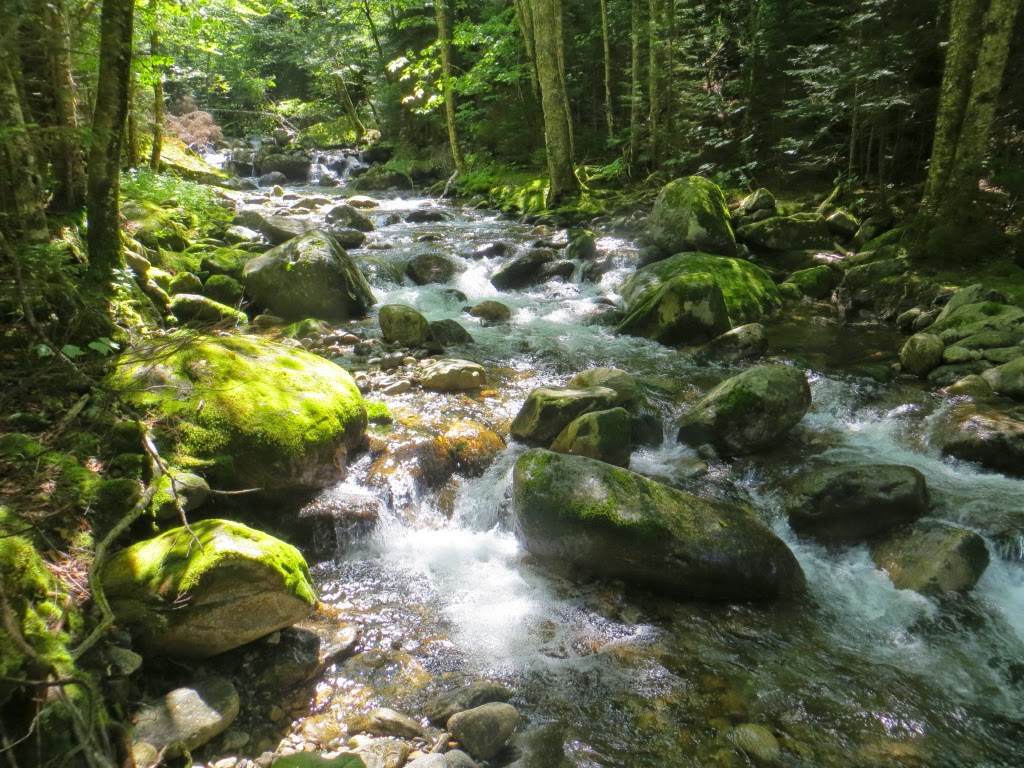 A pretty trailside spot along the river. 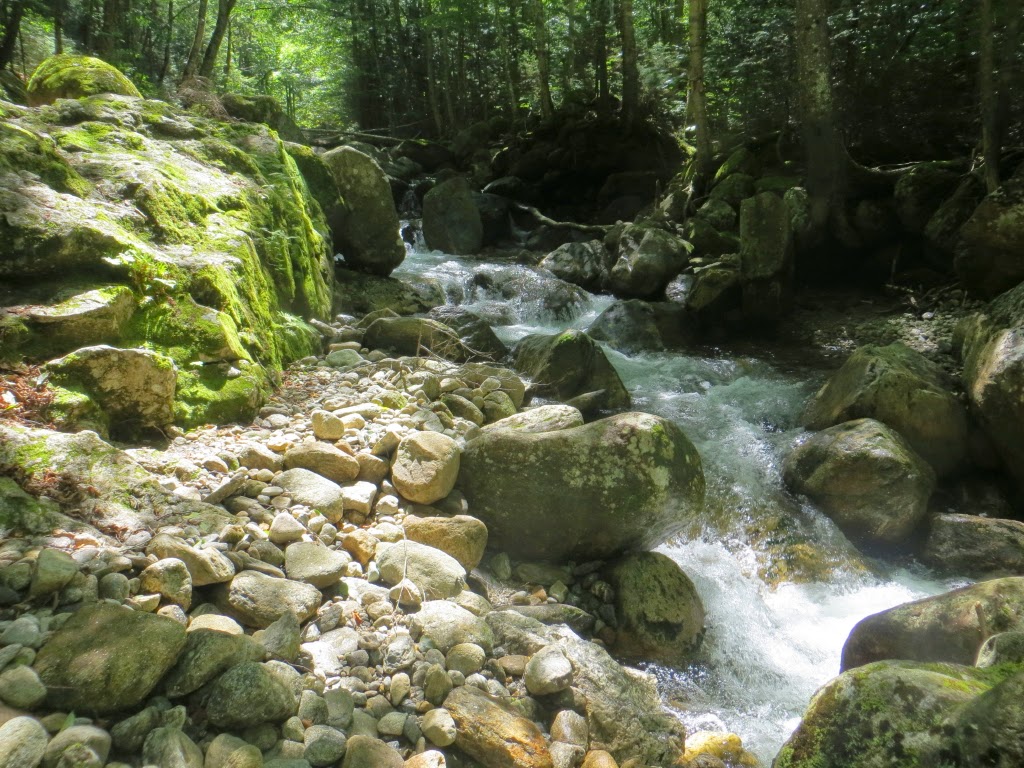 Classic Randolph Mountain Club signs at the junction at the foot of Castle Ravine. The RMC does an admirable job maintaining their numerous trails in the Northern Presidentials. 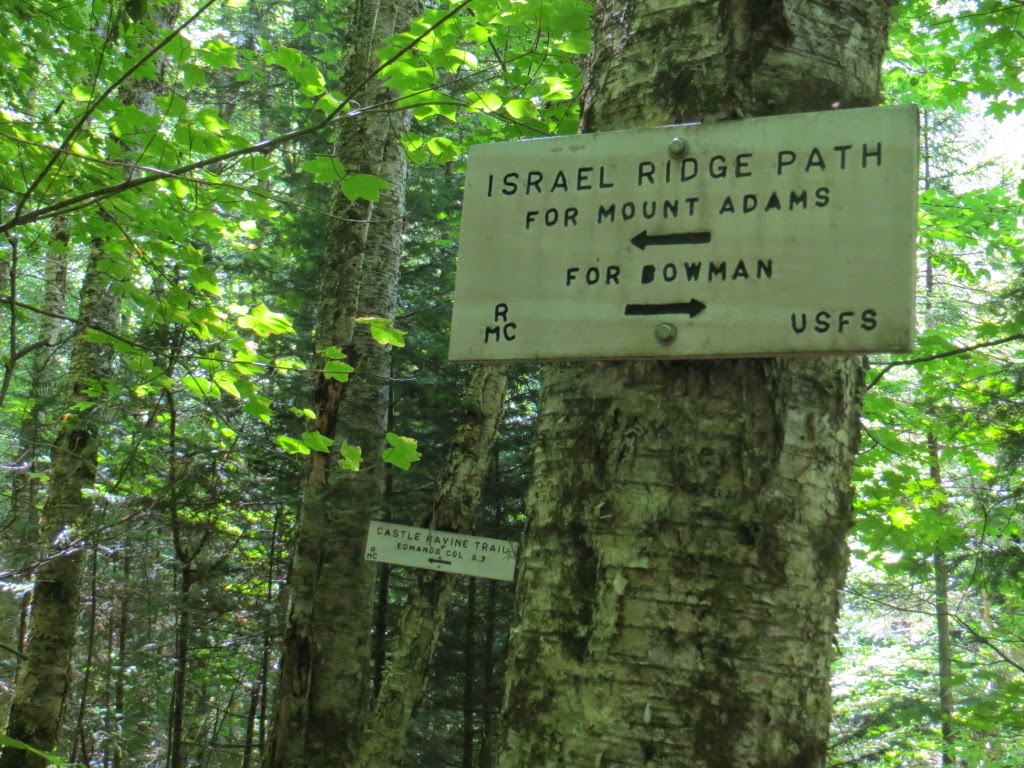 After a long sidehill climb I reached a junction with The Link and dropped down a short distance to the top of the First Cascade. The ledge shelf here is somewhat similar to the perch at Thoreau Falls in the Pemi Wilderness. Mt. Bowman, a wooded spur of Mt. Jefferson, rises beyond. 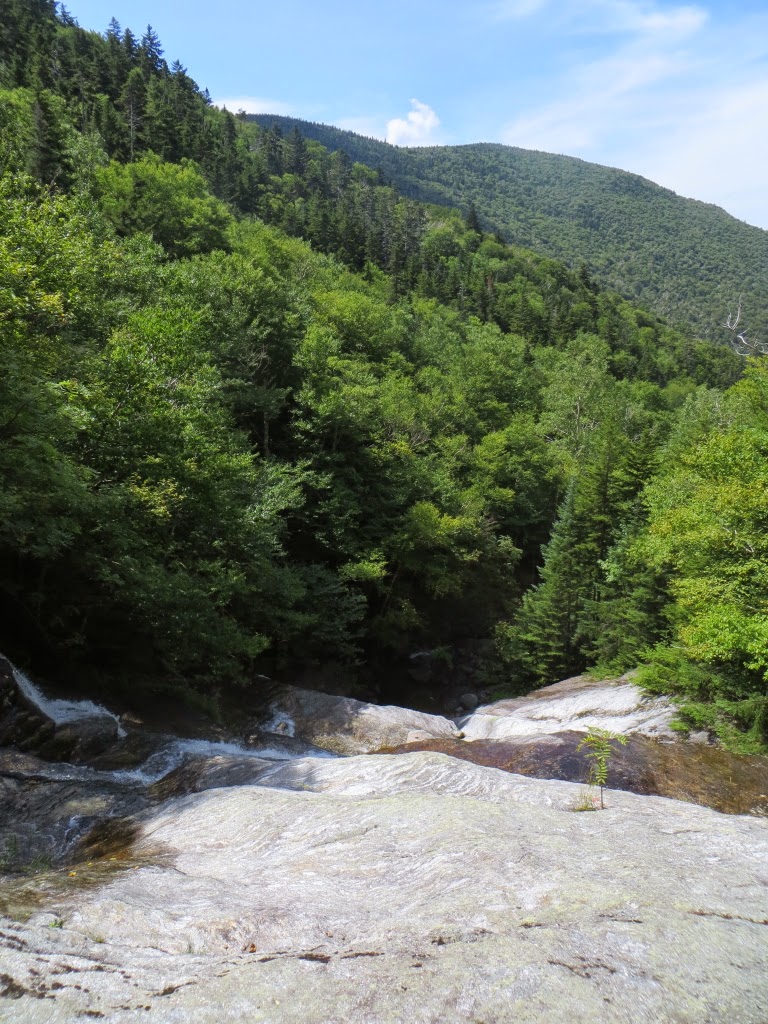 Looking down the First Cascade, which drops off in a series of ledge steps. 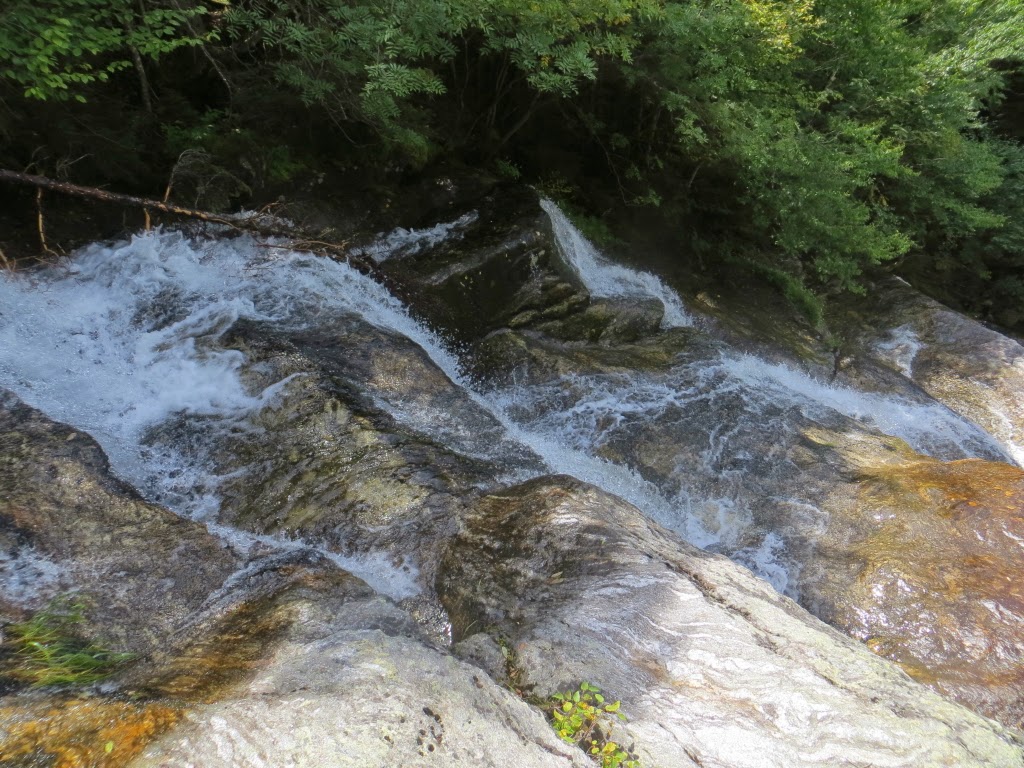 A  short climb over steep and rough terrain with two ladders led to the broad ledges of the Second Cascade, a great spot to hang out for a while in the sun. 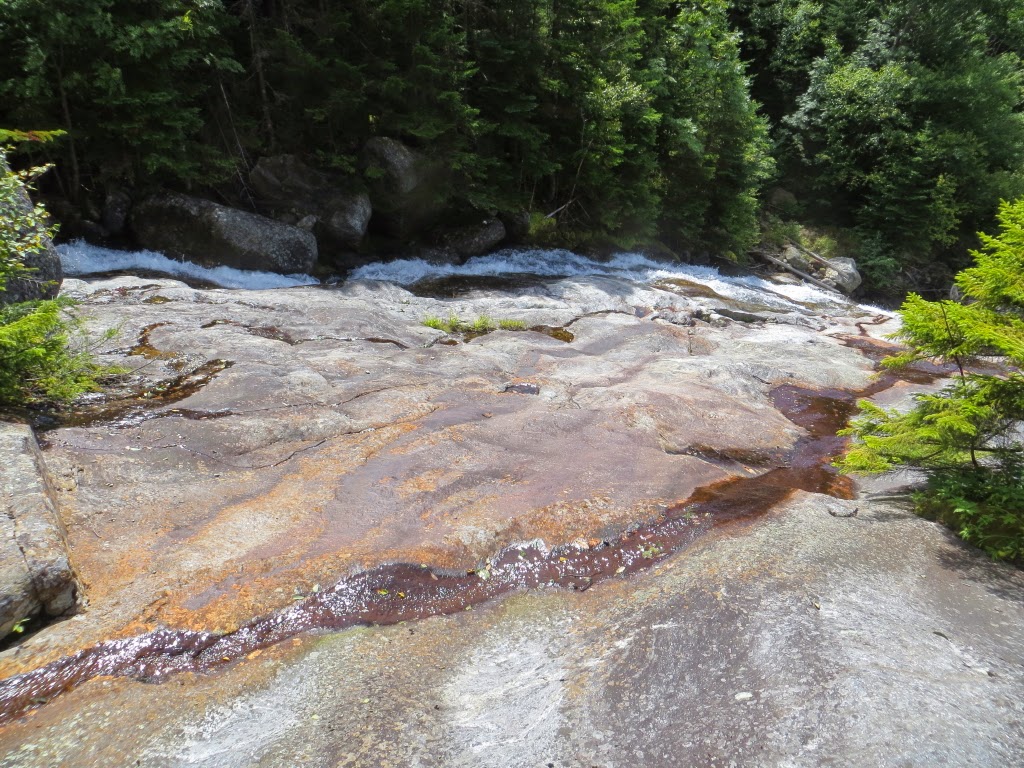 Another view to Mt. Bowman, and also out to northern Vermont. 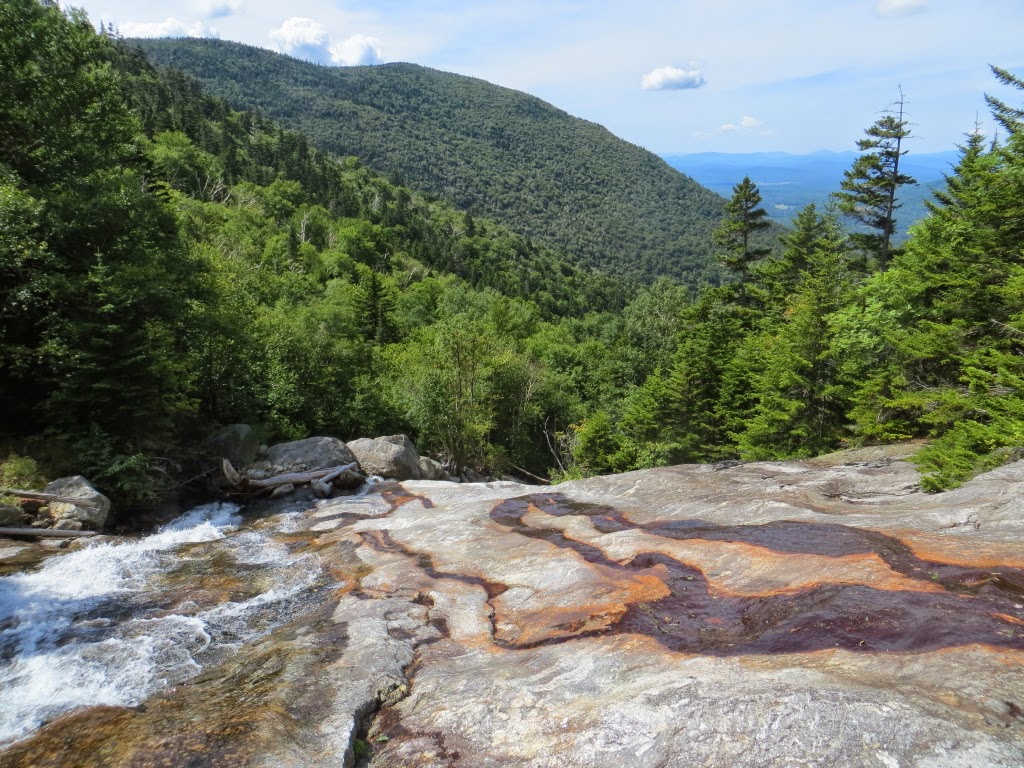 Second Cascade from below. 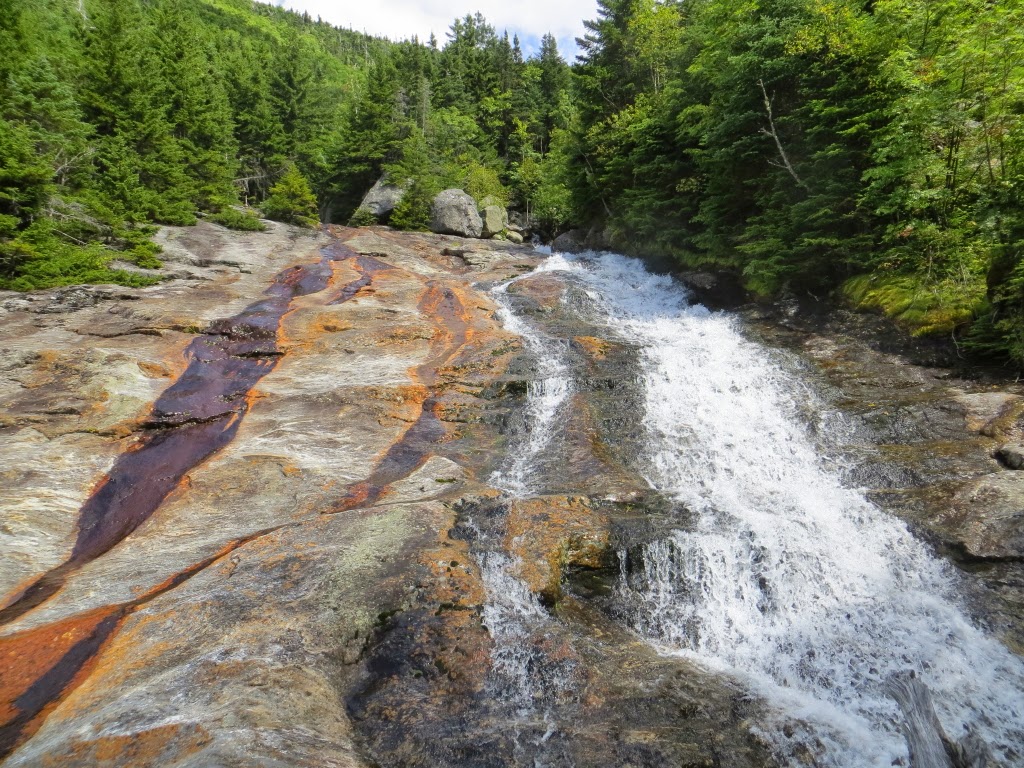 Before continuing up to Emerald Bluff, I snagged a nearby geocache. 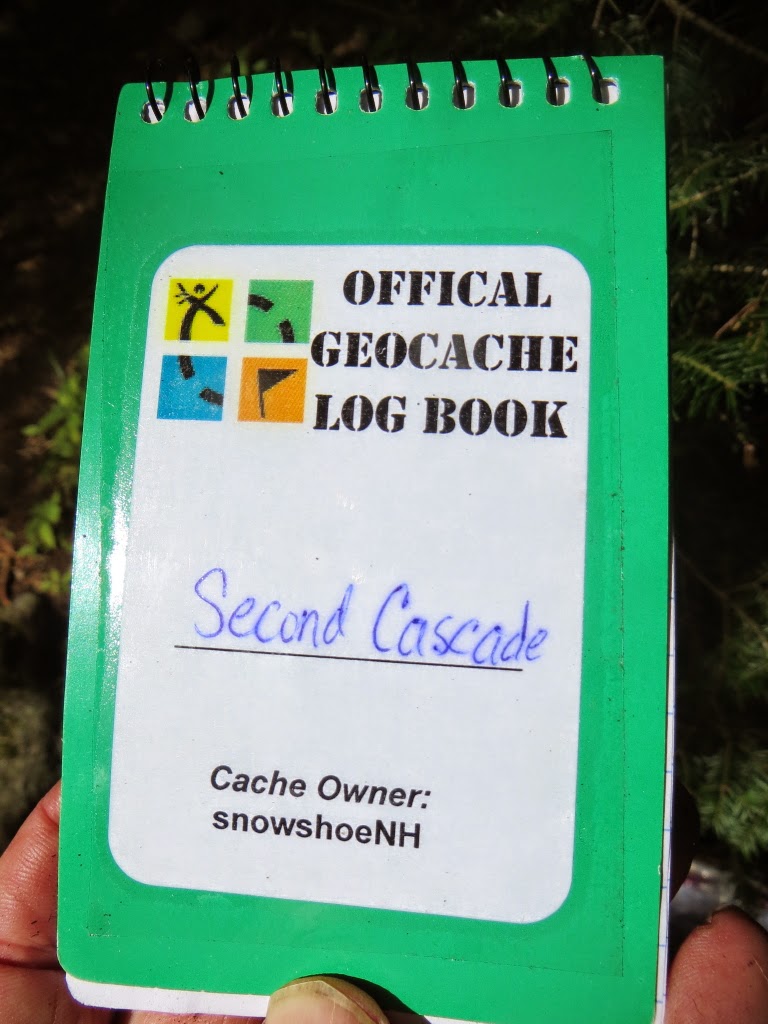 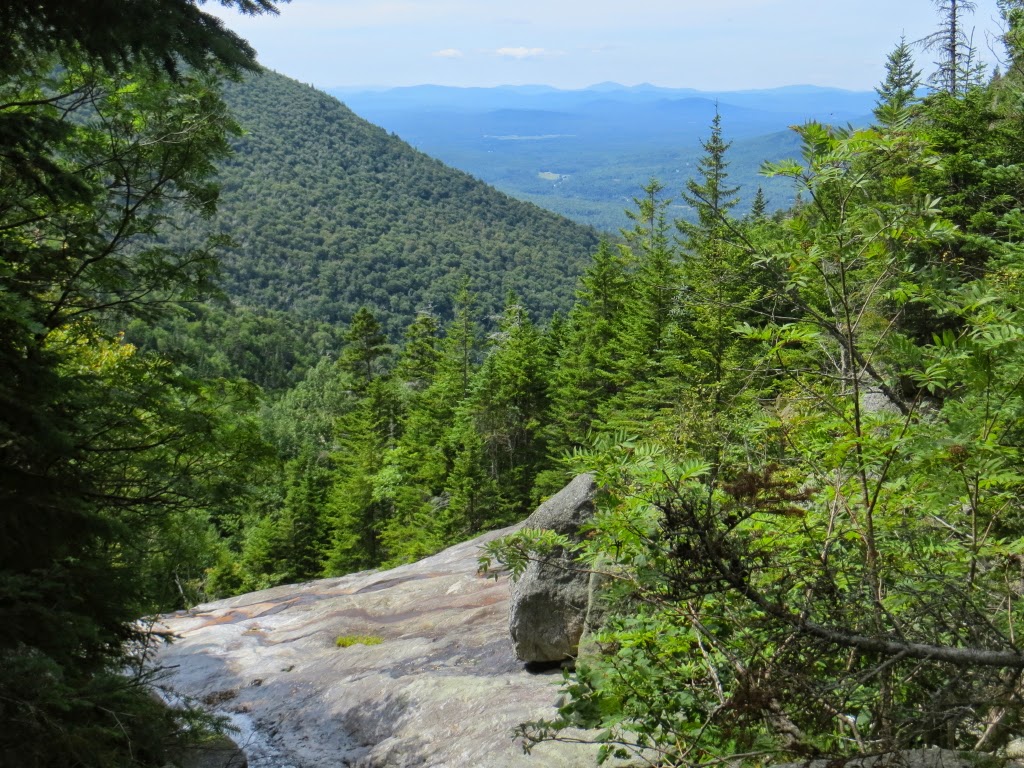 The first 400 ft. of elevation gain above the cascades is steep. This RMC ladder - one of two on this section - is near the top of the steep pitch. 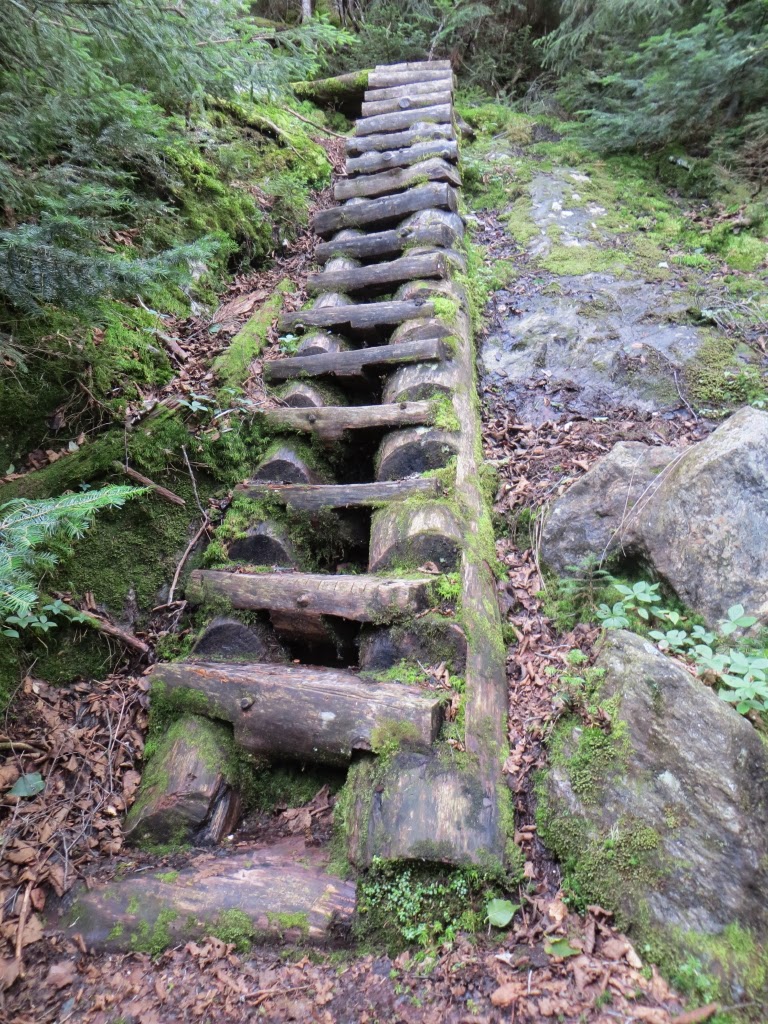 A little higher up you get a peek at this huge waterfall on the headwall of Cascade Ravine. J.R. Edmands built "pleasure paths" to the upper cascades in the early 1890s, but they were badly damaged by floodwaters and slides in 1927, and were totally abandoned in the 1930s. Getting to this cascade today would undoubtedly entail a heinous bushwhack. 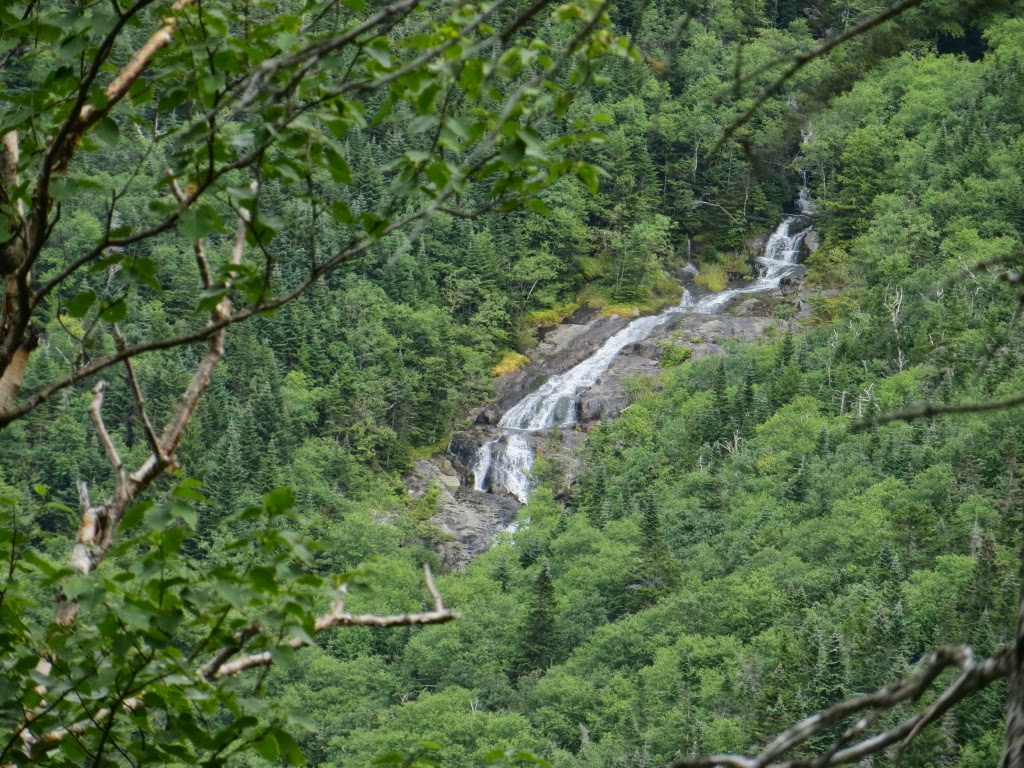 The wild and beautiful Israel Ridge Path as it slabs up the eastern side of the ridge, once known as the "Emerald Tongue." 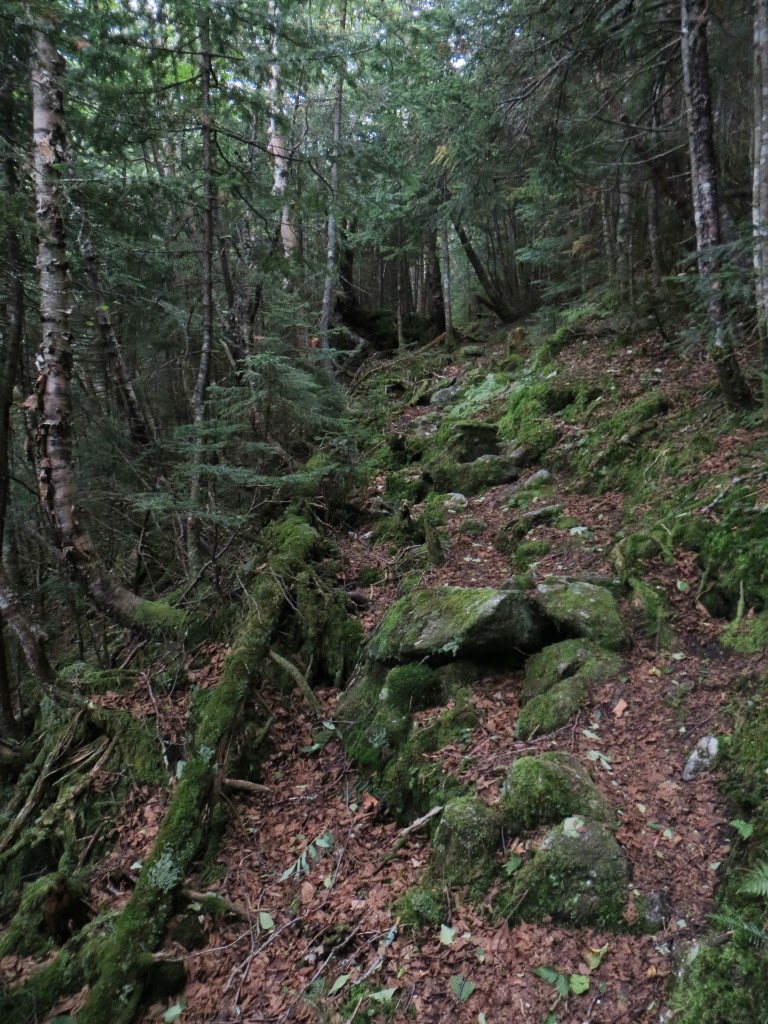 The upper end of the Emerald Trail, which leads gently to Emerald Bluff, then drops steeply into Castle Ravine. The steep part of this trail dates back only to 1970. 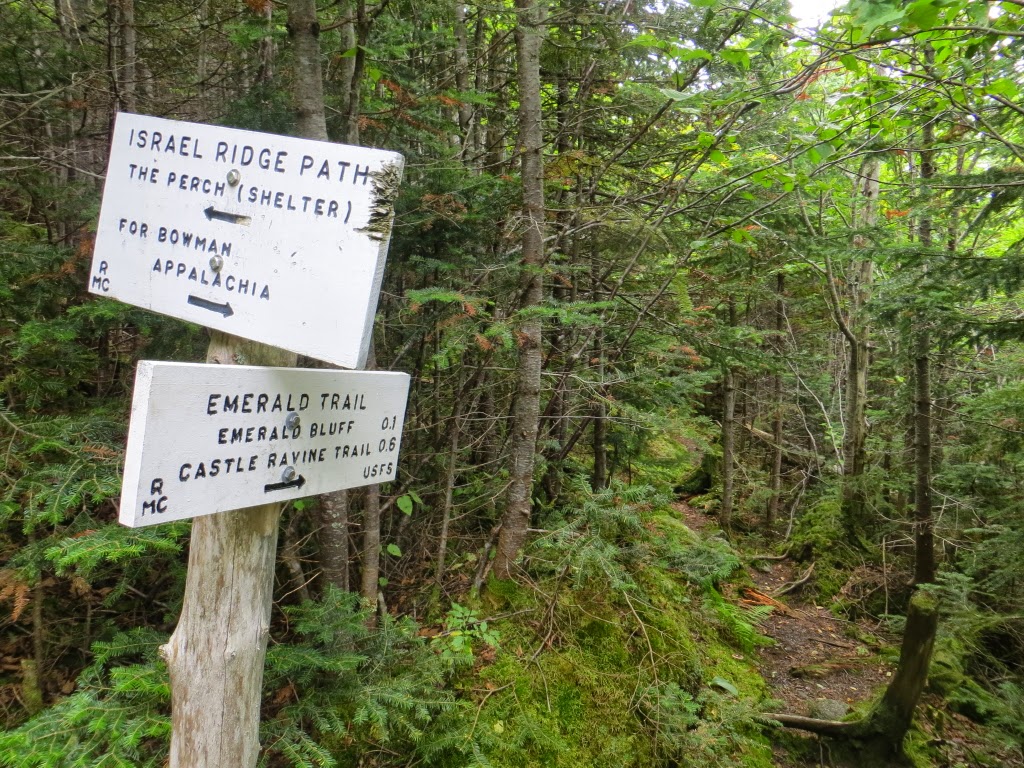 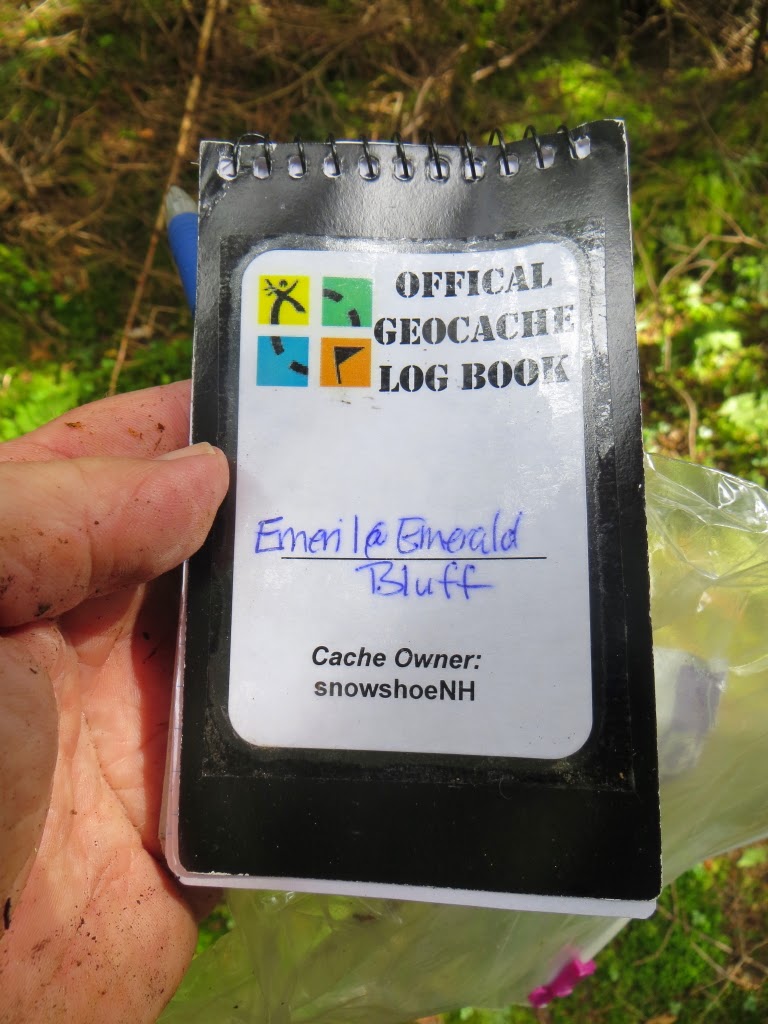 The open ledges of Emerald Bluff (4025 ft.) are one of the finest perches in the Presidentials, with a striking view to the headwall of Castle Ravine. The prominent thin slide was probably triggered by Tropical Storm Irene in 2011. 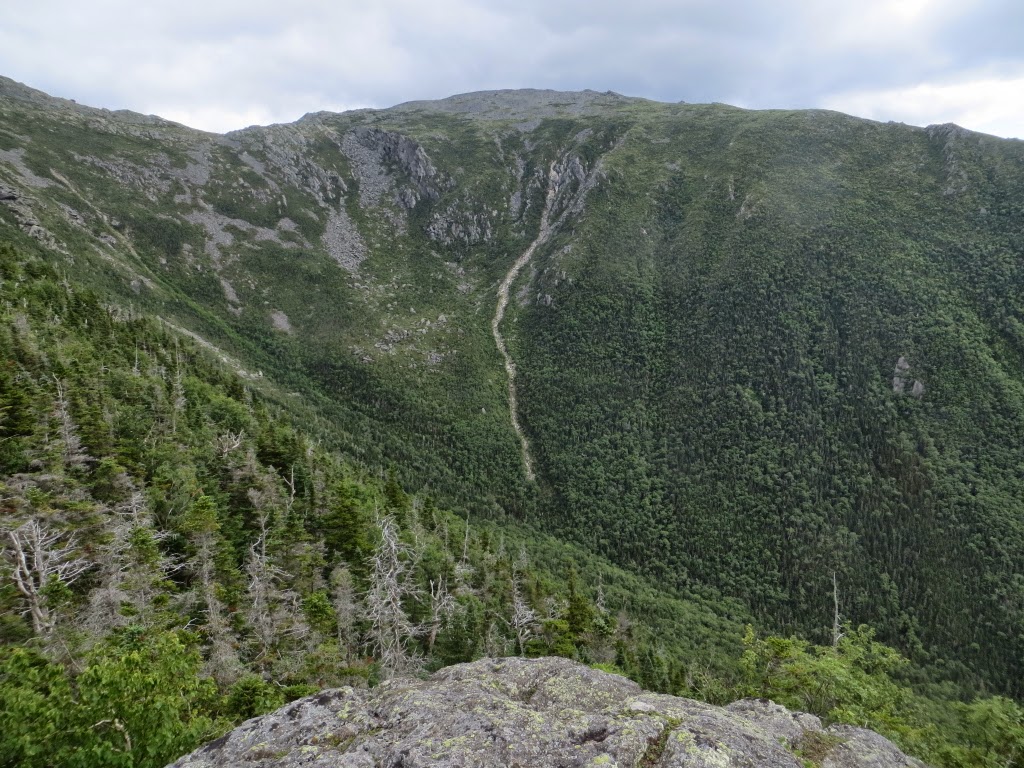 The widest views are obtained from a slightly lower ledge, reached by a rather difficult little down-scramble and a short overgrown path through the scrub. Here you get a great vista down the valley to Mt. Bowman with Cherry Mountain and distant Vermont ridges beyond. 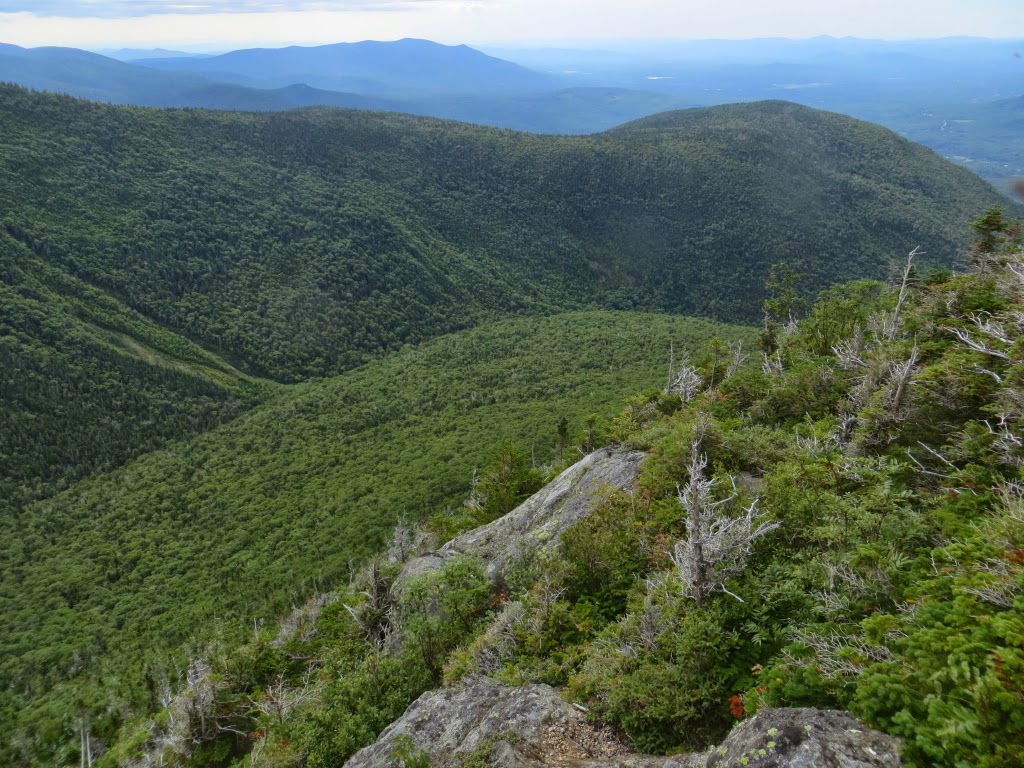 There's also a direct view across to the Castles on Mt. Jefferson's Castellated Ridge. 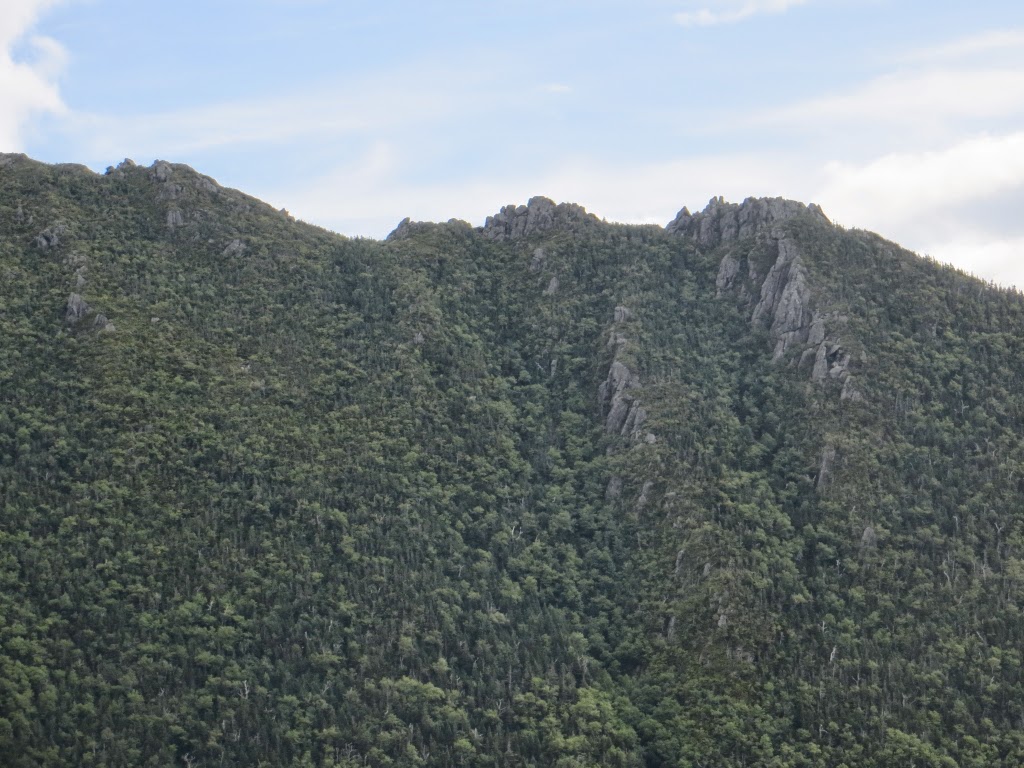 Peering down nearly a thousand feet to the valley floor. 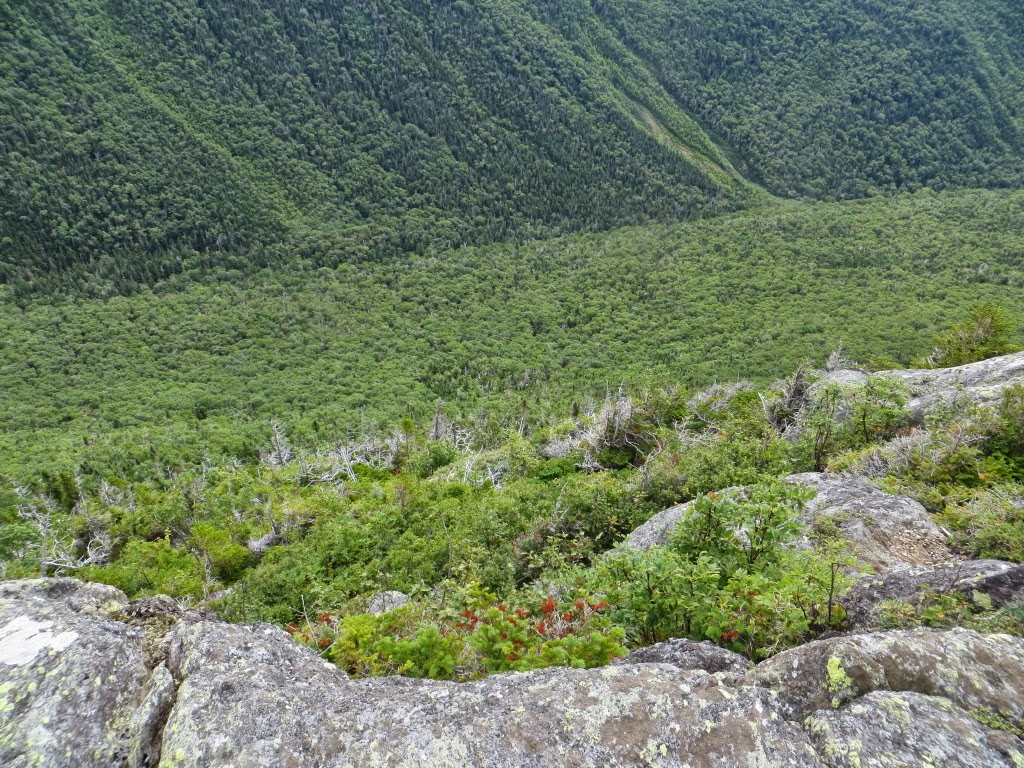 An old slide scars the far wall of the valley. 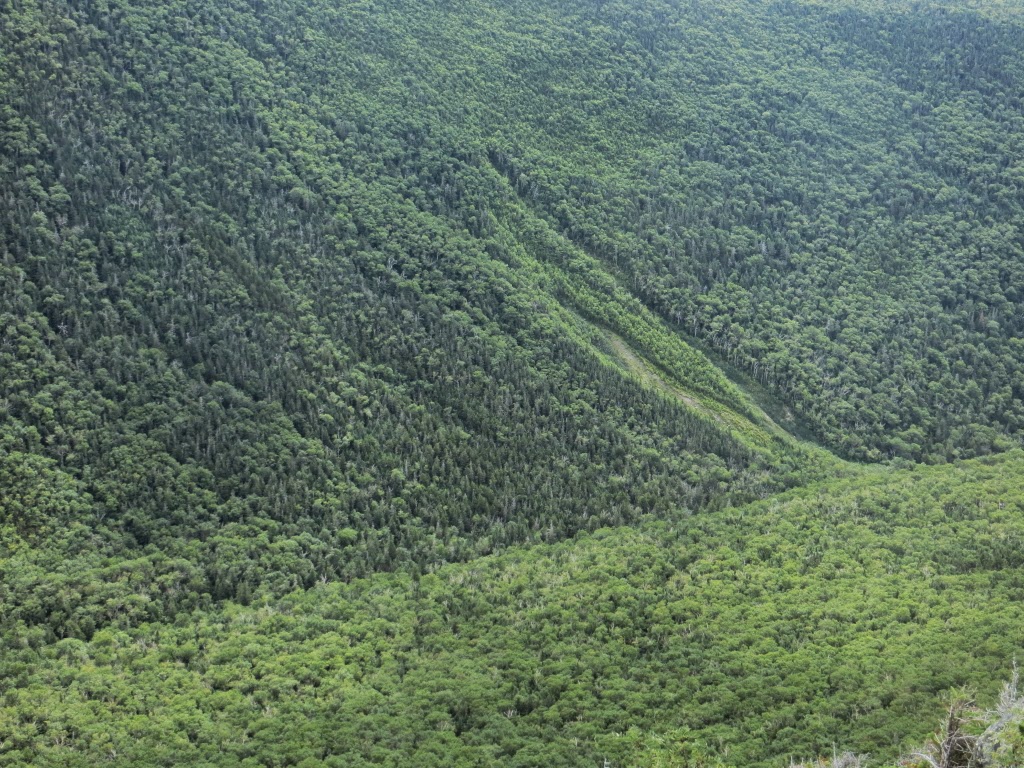 I've bushwhacked across to the slide from the Castle Ravine Trail a couple of times. It offers a neat view up to the ravine headwall, though the lighting is tough for photos. 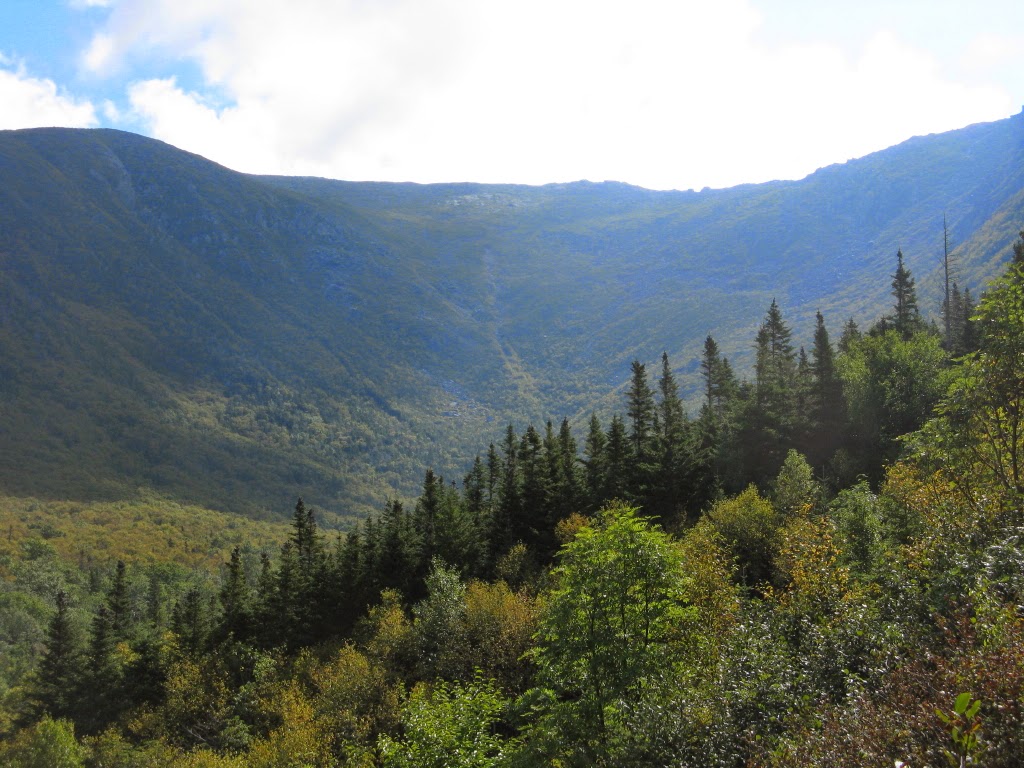 Late afternoon sun on the headwall. An hour and a half went by quickly at this wonderful spot. 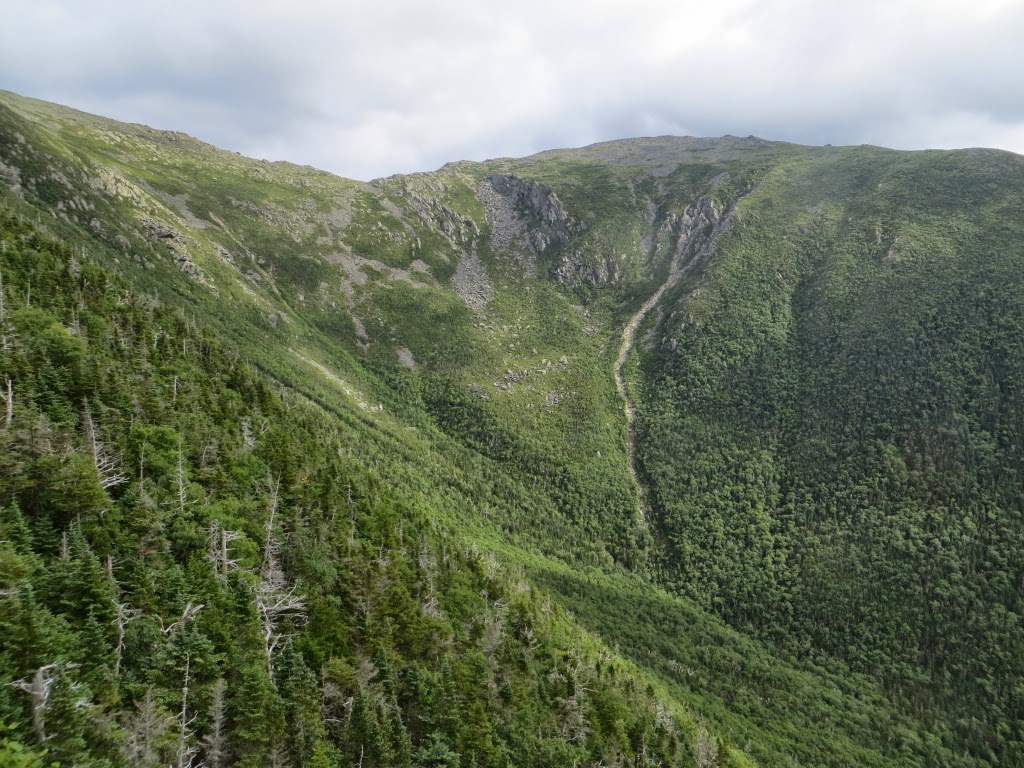 An impressive cliff formation on the headwall. 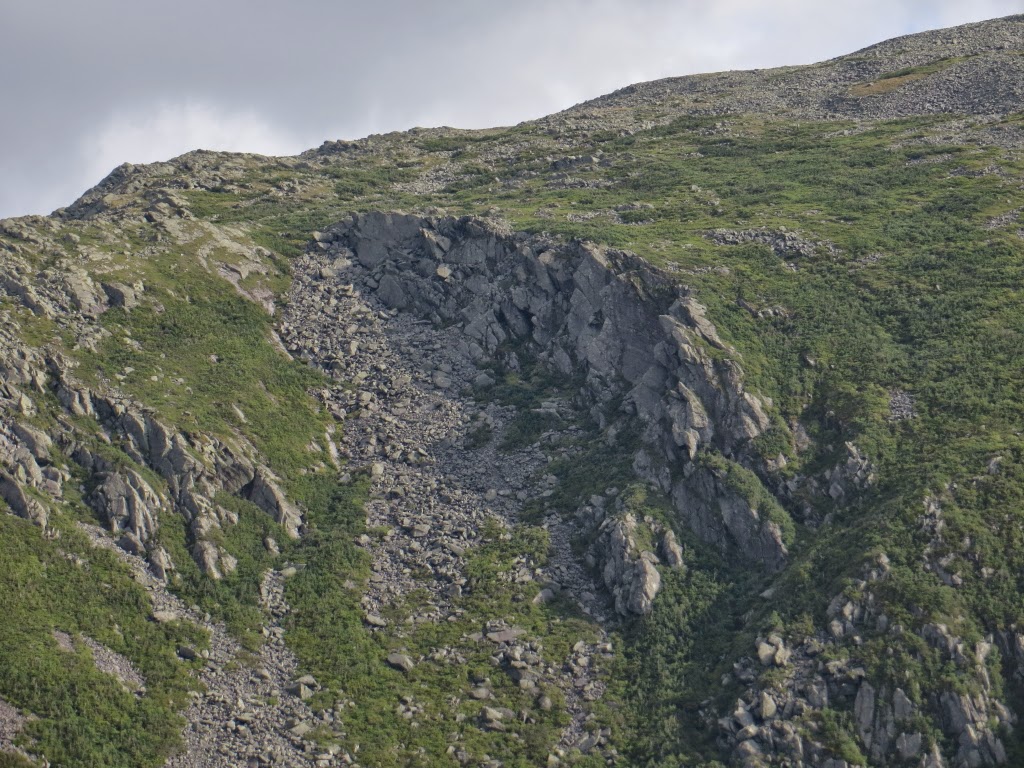 Forest along the Emerald Trail. Down the steep section on the nose of Israel Ridge. 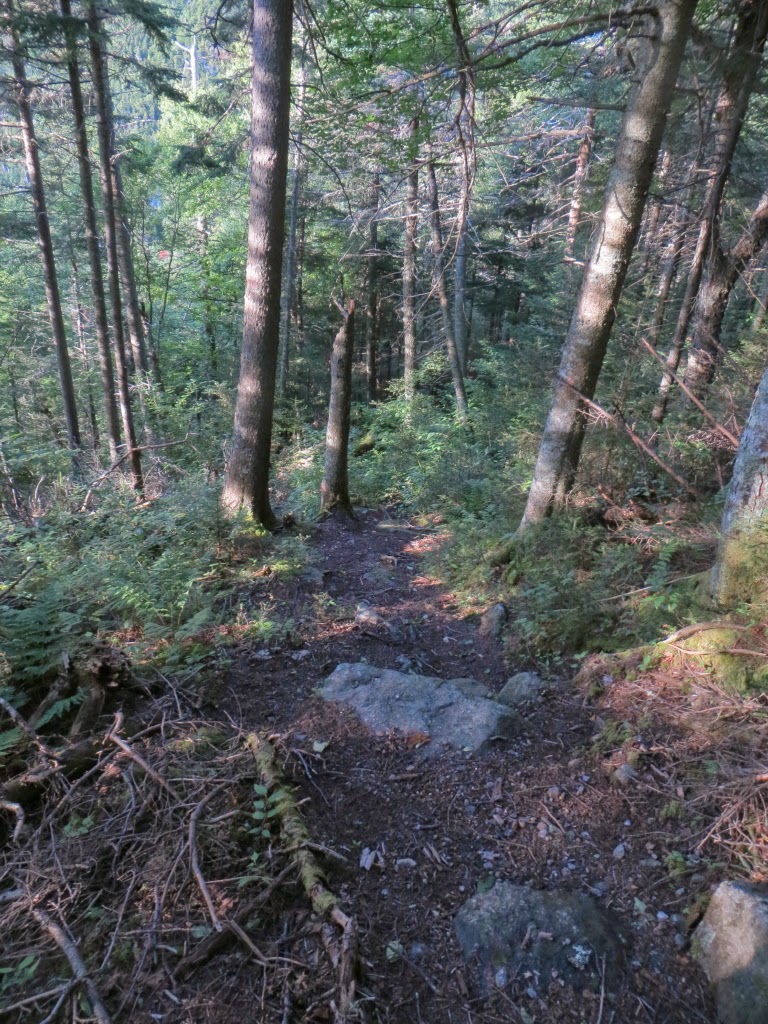 Evening light at Second Cascade. Made a late exit, but didn't have to pull out the headlamp. 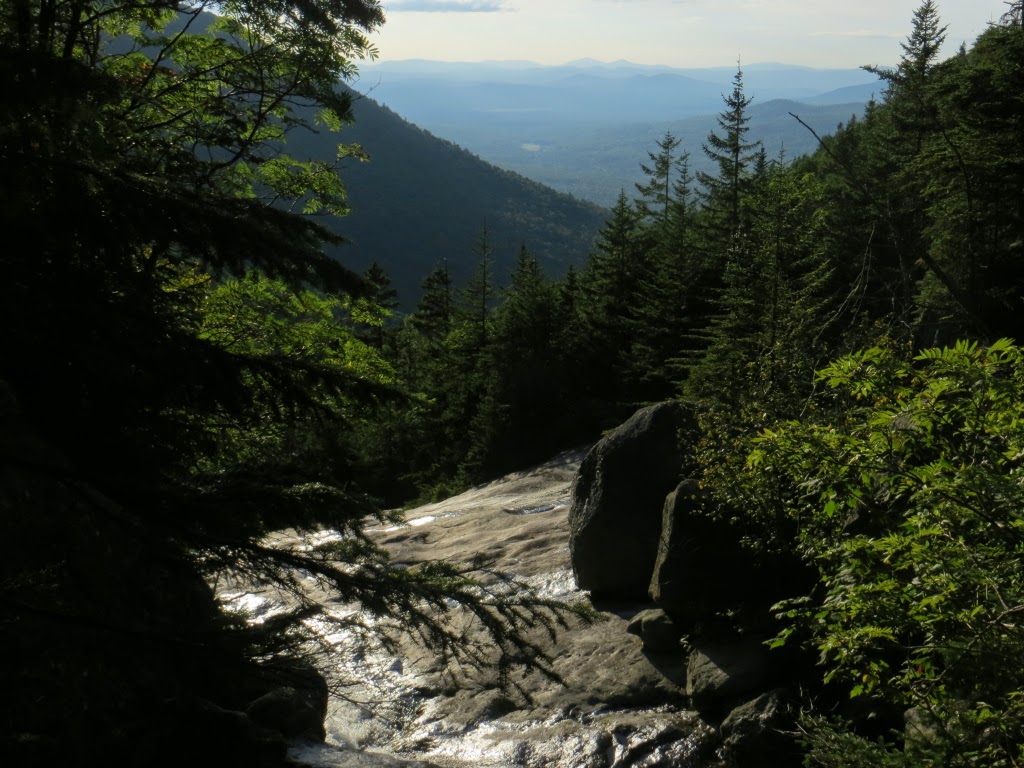