The morning of our third full day in the Catskills dawned grey, cold and dreary, with rain and snow showers. It was a very unappealing day for hiking, though improvement had been promised for the afternoon. By noontime there was no sign of clearing, so we took a quick drive up to Stony Clove, the deep gap between Hunter Mountain and Plateau Mountain, for a look at Notch Lake. 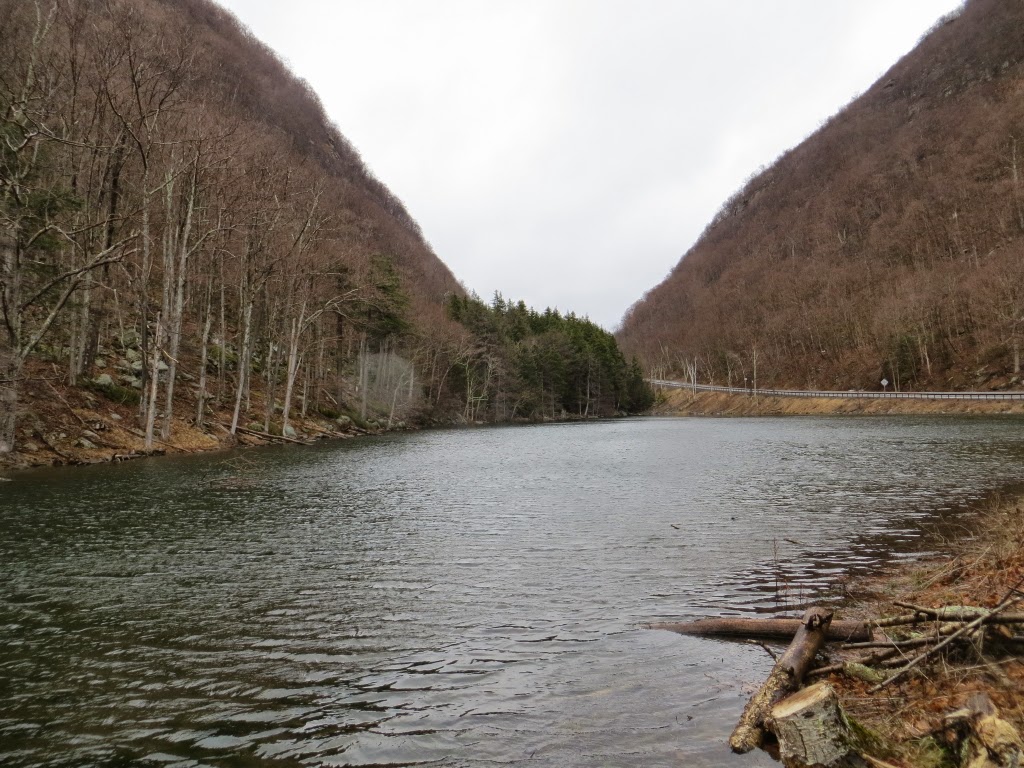 Skies soon started to brighten a little, so I decided to drive over to Deep Notch and attempt the 4-mile round trip bushwhack to Halcott Mountain (3520 ft.), one of the trailless Catskill 3500 peaks. A parking spot on Rt. 42 is the usual launching point for a Halcott trek. Right next to the pulloff is a nice cascade called Halcott Falls. 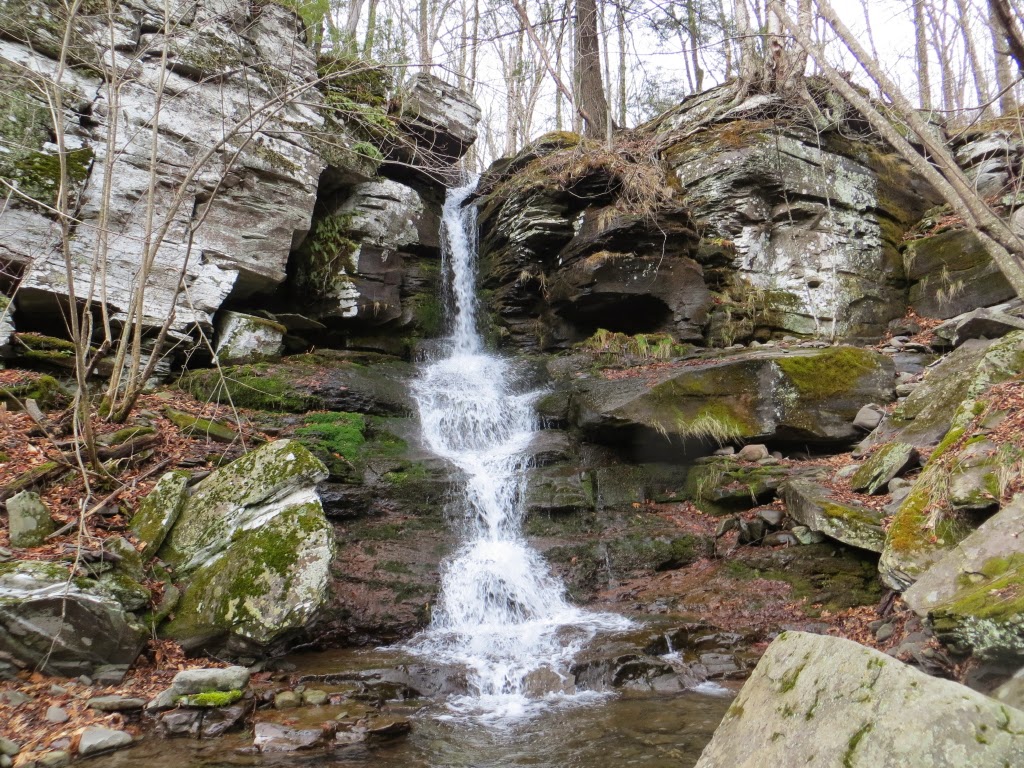 I climbed a rough path next to the falls, getting a side view, then headed south, crossing this brook and traversing towards another stream. 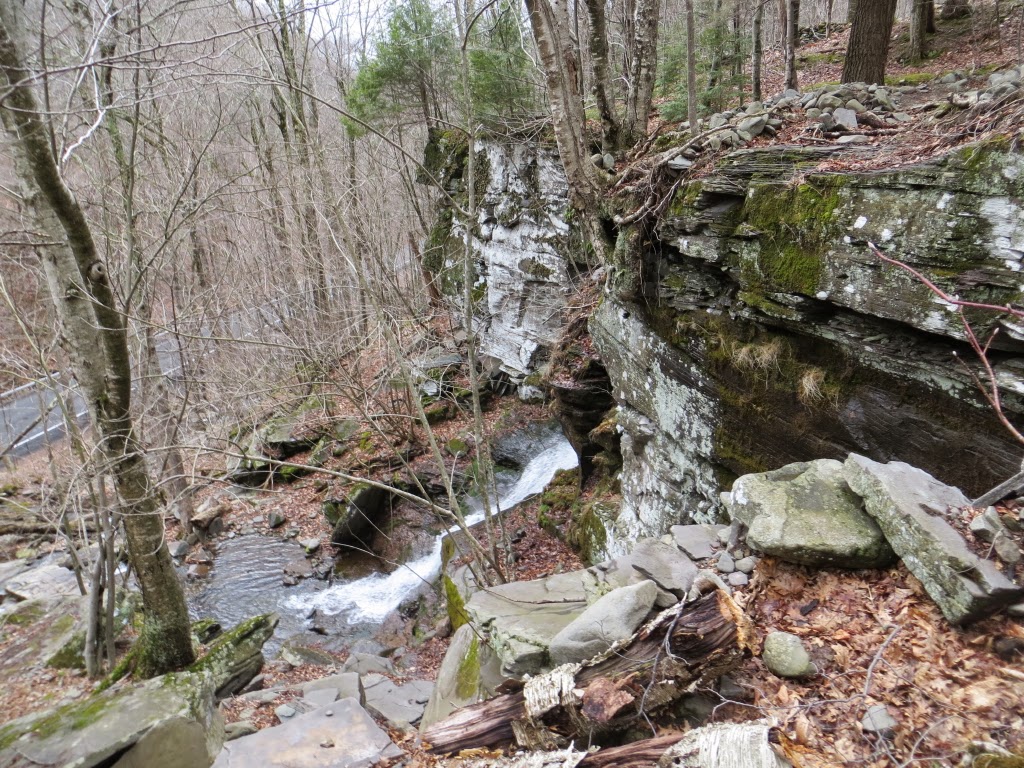 There were traces of a herd path in this area, but this was a 95% bushwhack on the route I used. Only on the summit plateau did I find a continuous herd path. I prefer it that way. Traversing across to the second brook, I passed a number of old stone walls. 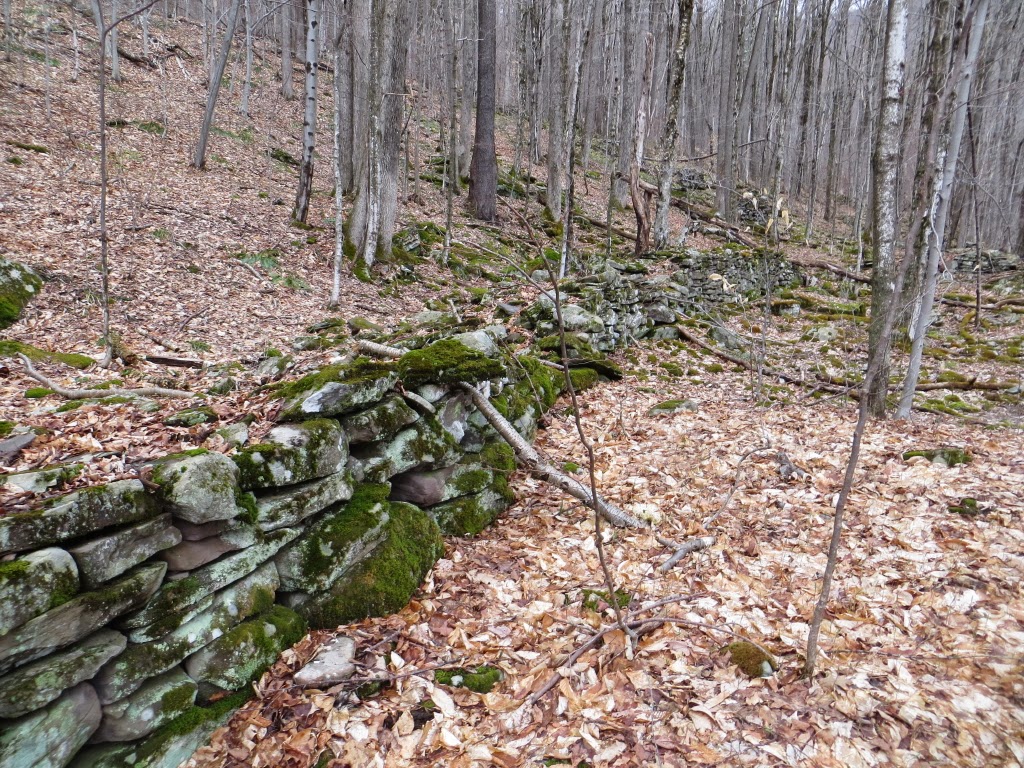 There were some nice cascades on the second stream, shown on some maps as the head of Bushnellville Creek. 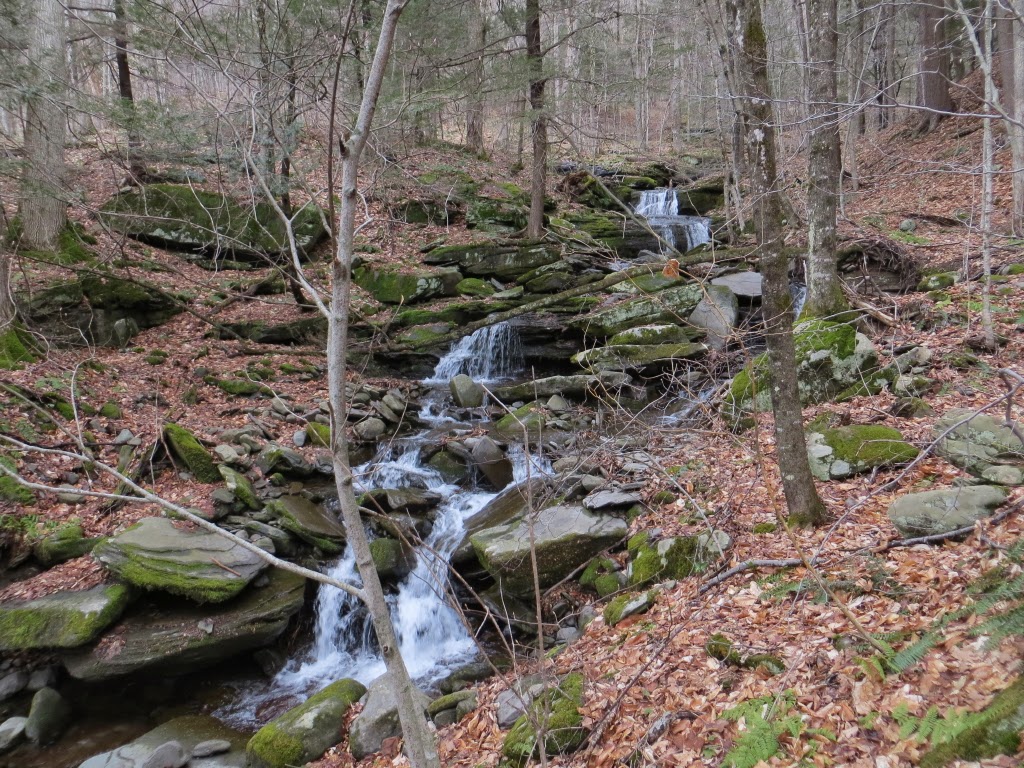 From here I simply followed the steep east ridge of Halcott, a pretty relentless climb of 1700 ft. in about 1.5 mi. Hardwoods all the way, though there were some whips and saplings and a fair amount of loose rocky footing. 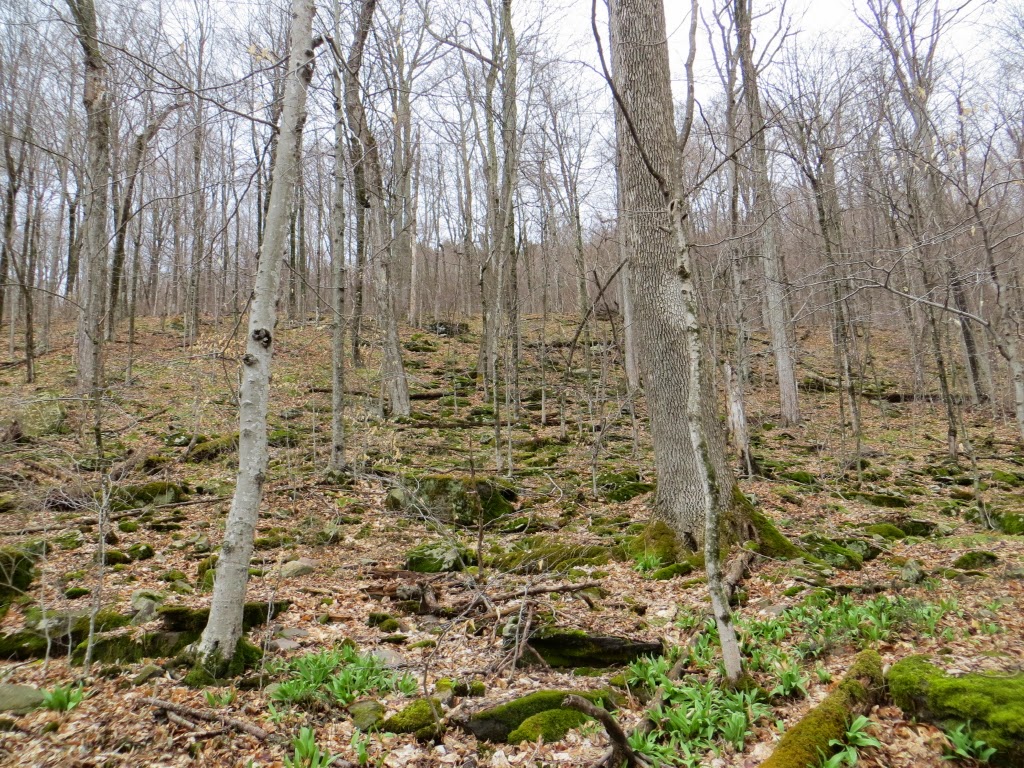 Looking back at Deep Notch through the trees. 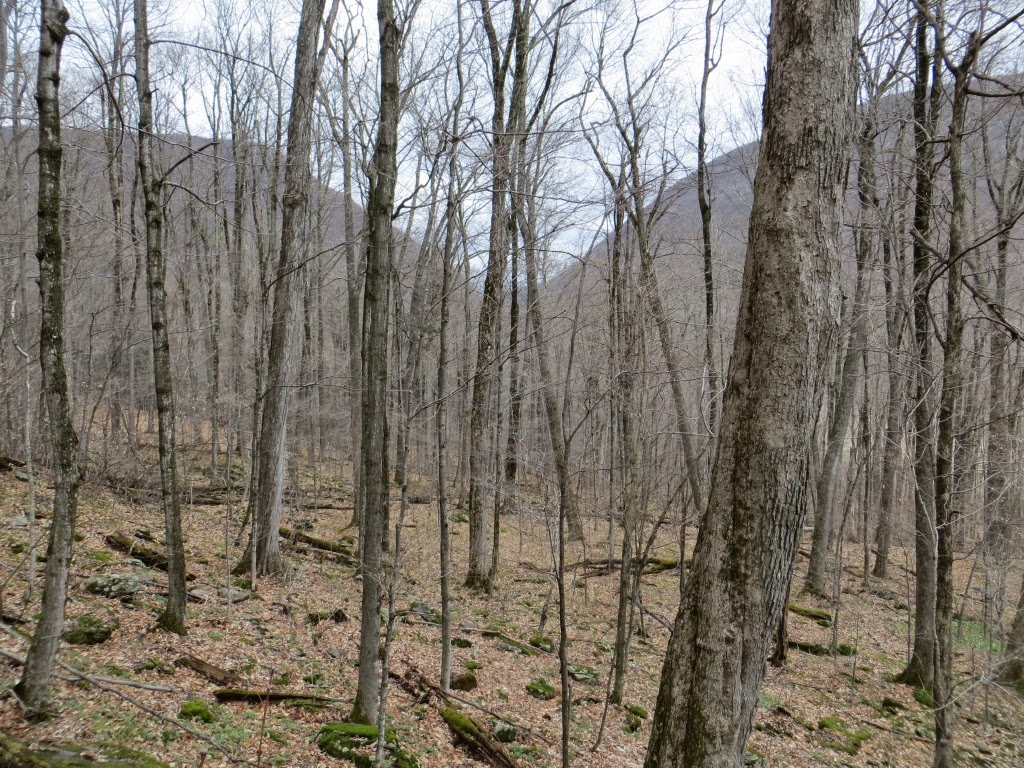 This was a typical Catskill ridge, steep pitches alternating with the occasional small, level shelf. 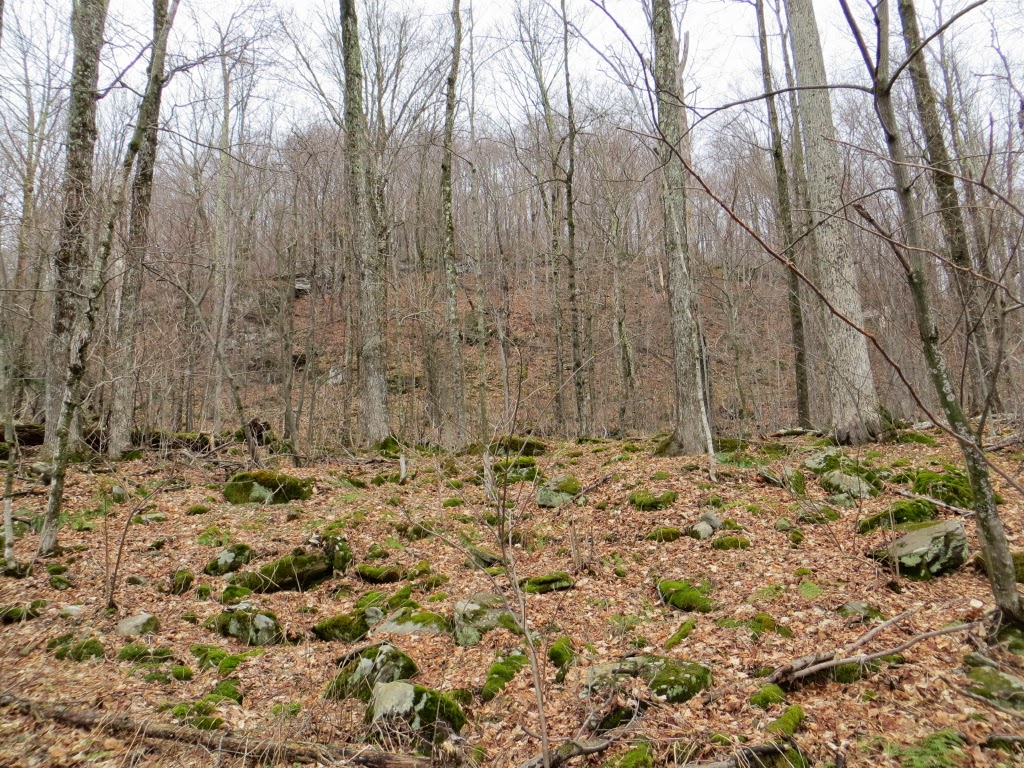 There were several small ledge bands to work around or through, but no serious cliffs. 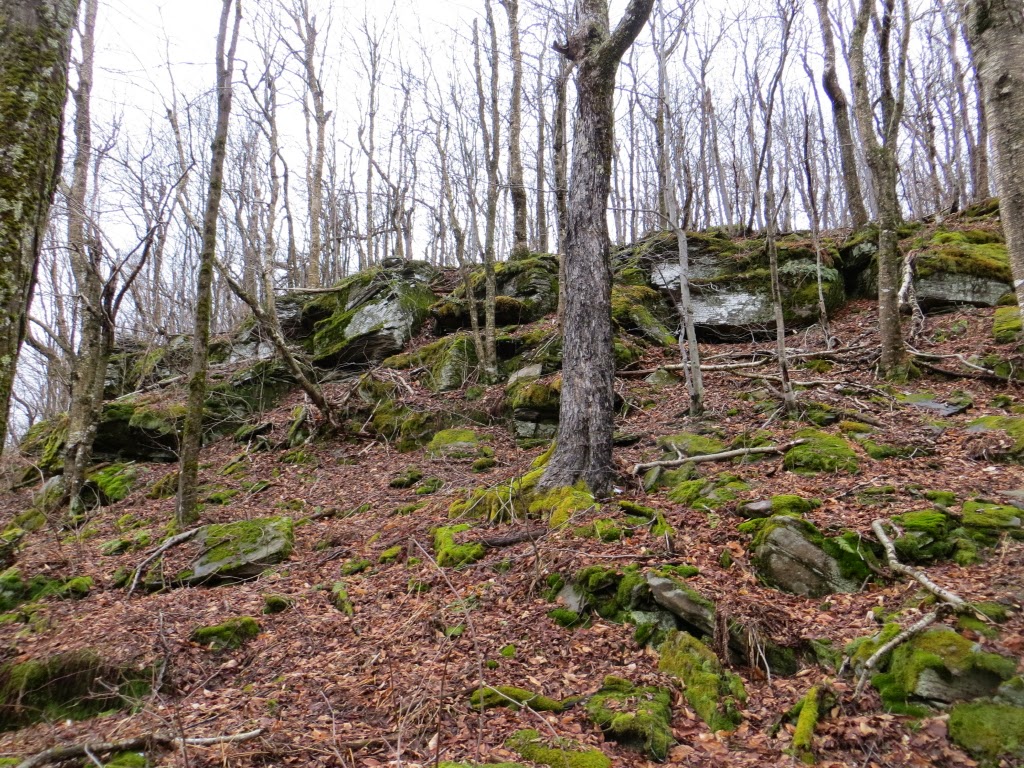 On the upper ridge a dusting of fresh snow began to appear. 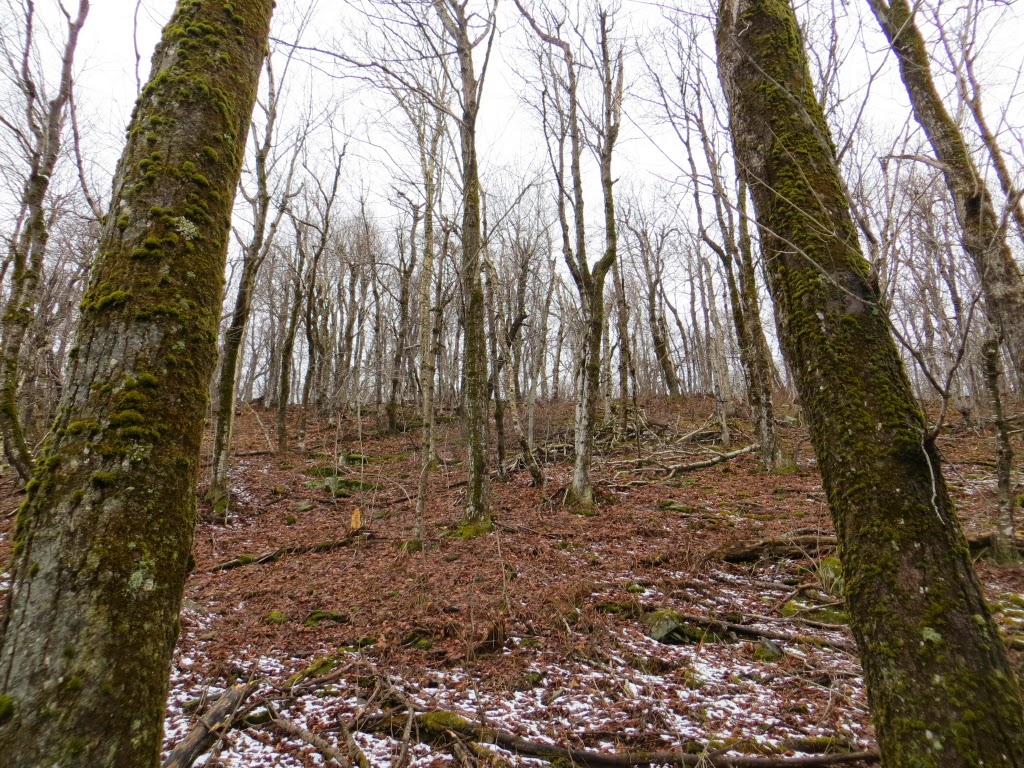 A quarter-mile traverse across the broad summit plateau got me to the summit clearing and canister. 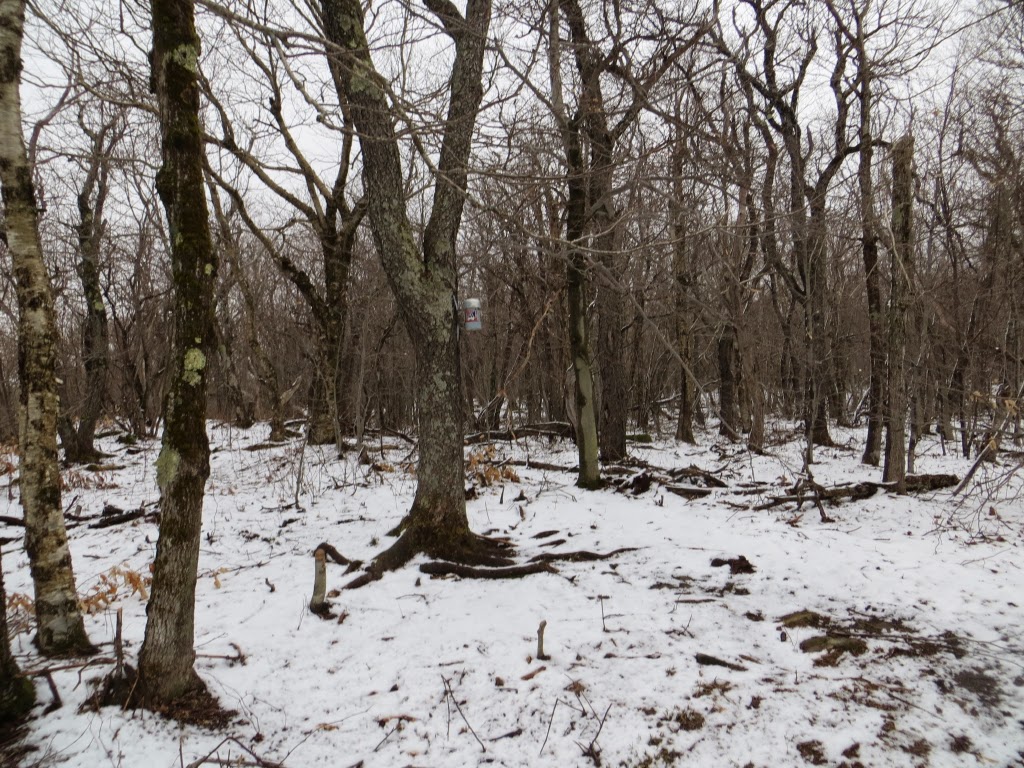 The Catskill 3500 canisters are built to last. 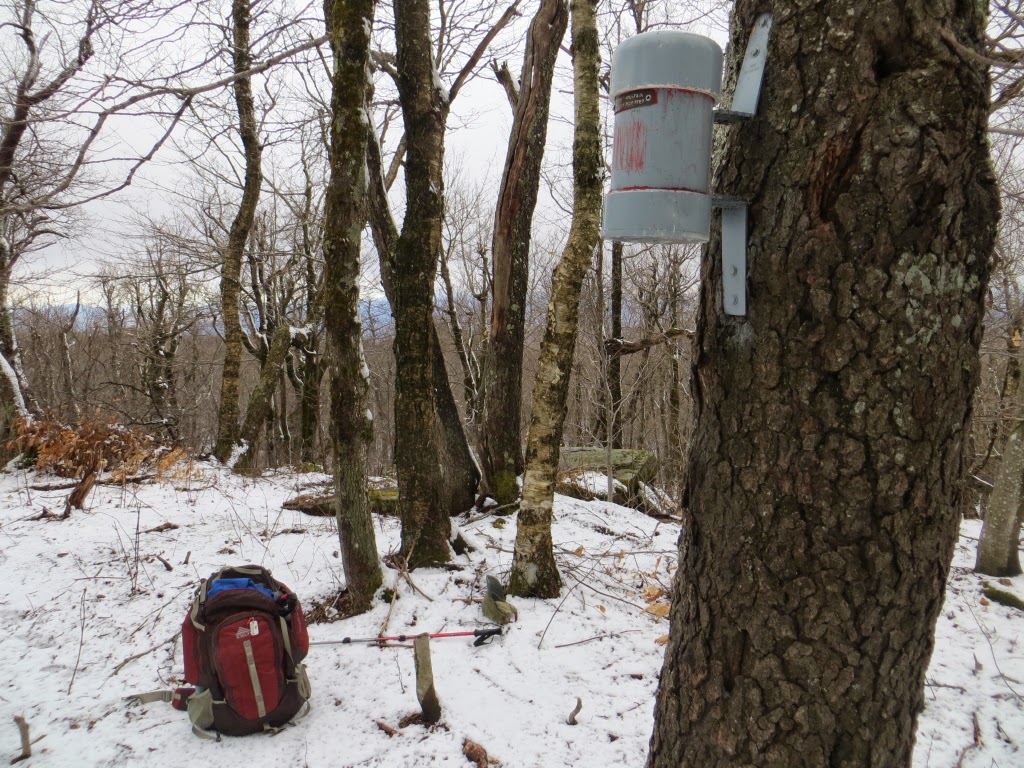 The second line is how locals pronounce "Halcott." 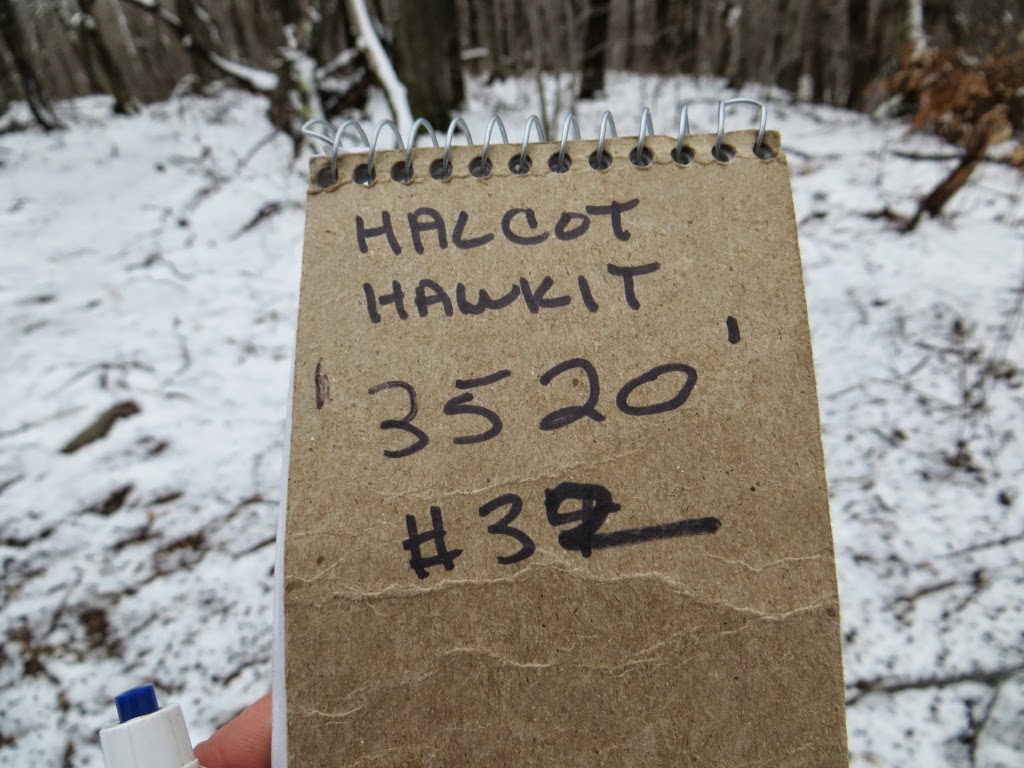 I couldn't resist a combination of NH and NY peakbagging symbols. 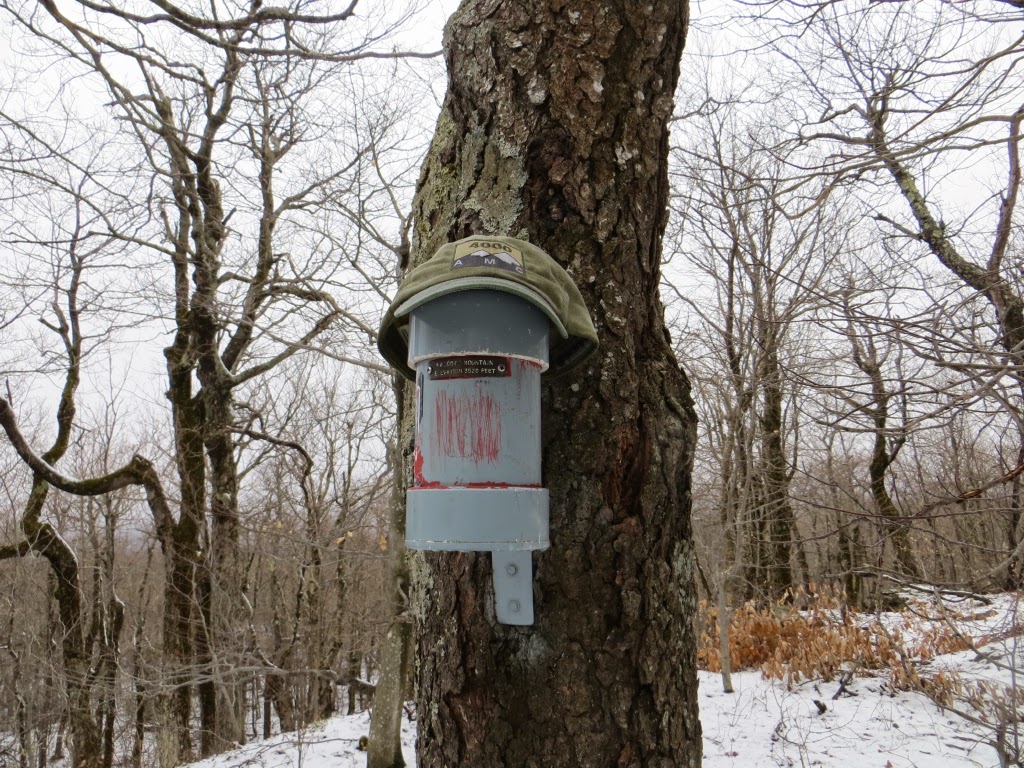 After a bite to eat, I headed south to try and find a viewpoint shown as a star on the NY/NJ Trail Conference trail map of the Central Catskills. 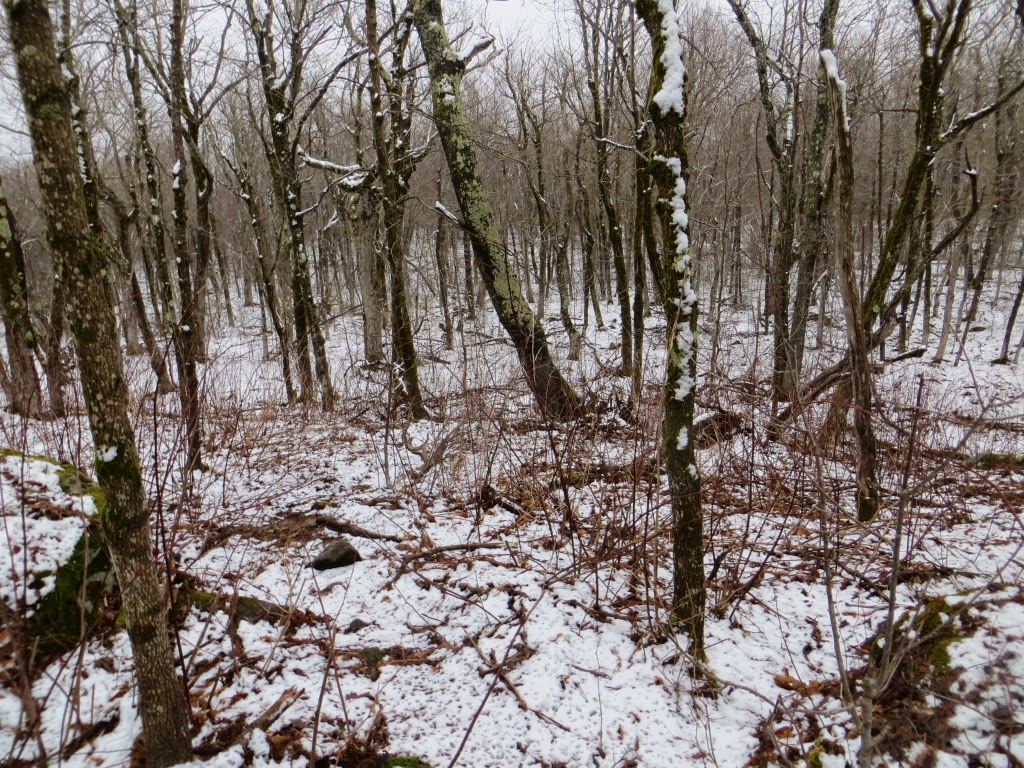 It took a while, but I eventually found the small ledge outlook. Unfortunately, the fog had moved back in. 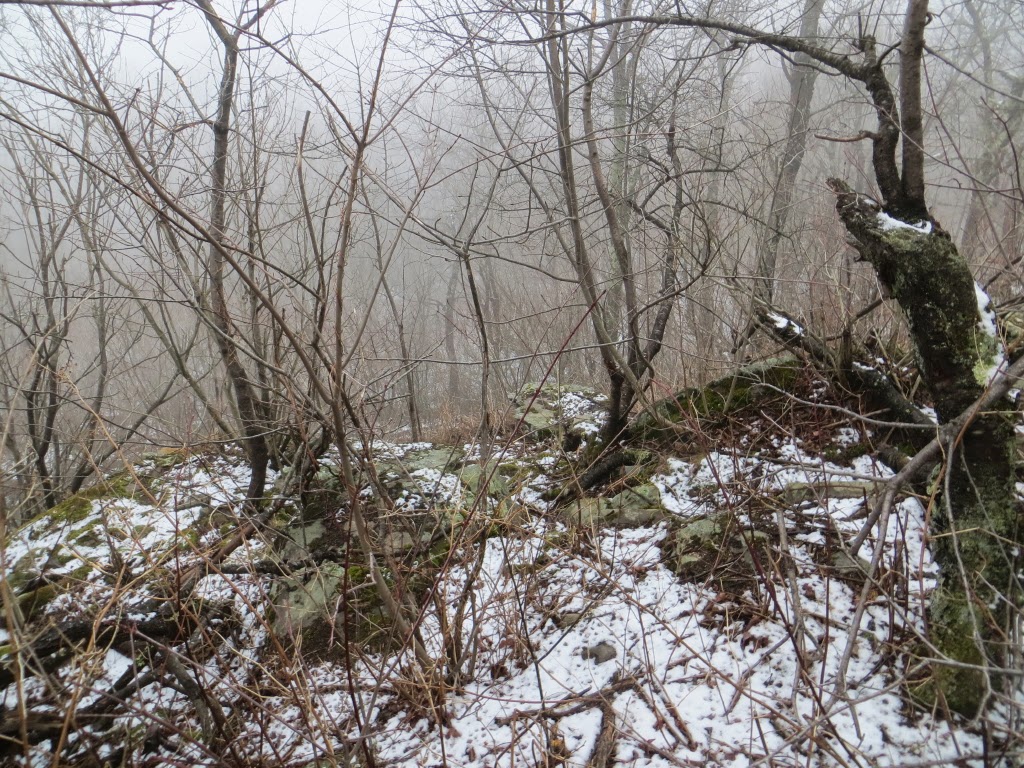 I waited a good 45 minutes hoping it would clear,  but the best I got was this glimpse of Rose Mountain rising above the Birch Creek valley. On a clear day, the Burroughs Range and Big Indian Range would be visible in the distance. 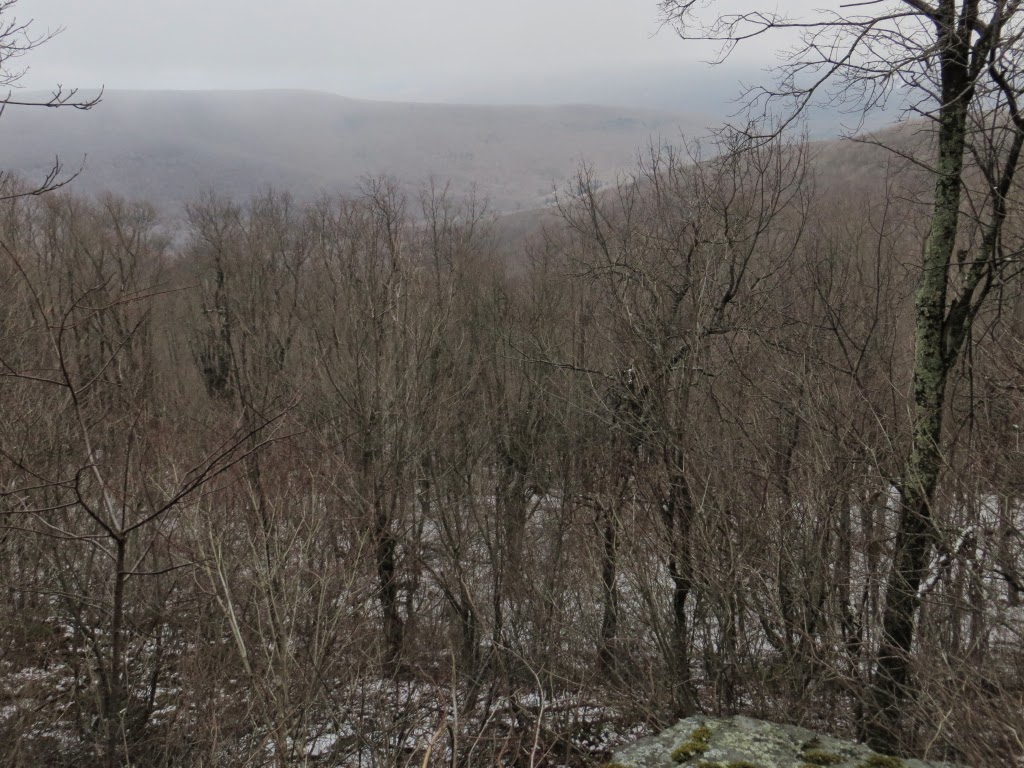 Rose Mountain and its southeastern spur. 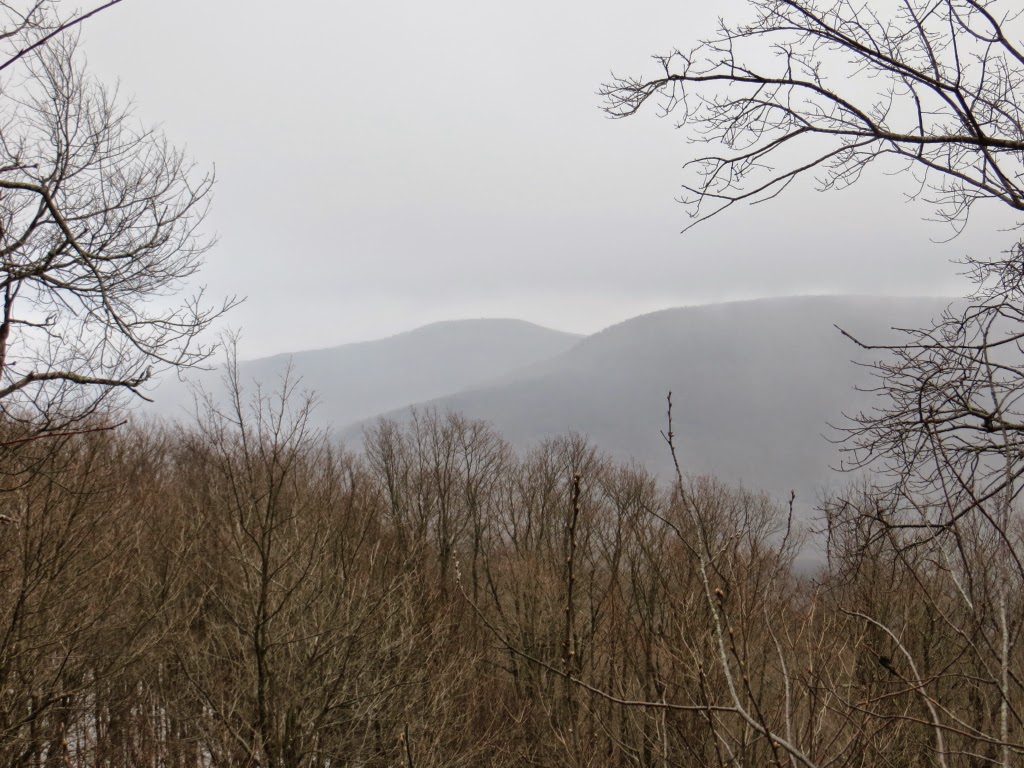 Back on the summit plateau, an eerie scene with the snow, the fog, and the gnarled old growth hardwoods. 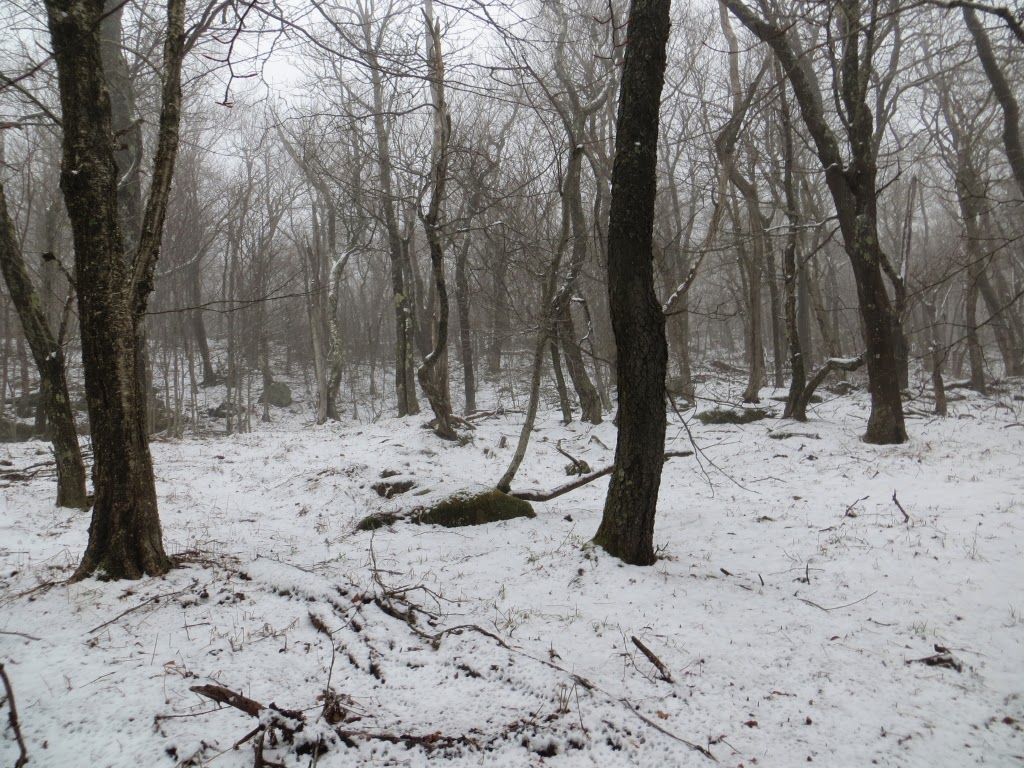 Of course, as soon as I started heading down, the views opened up. 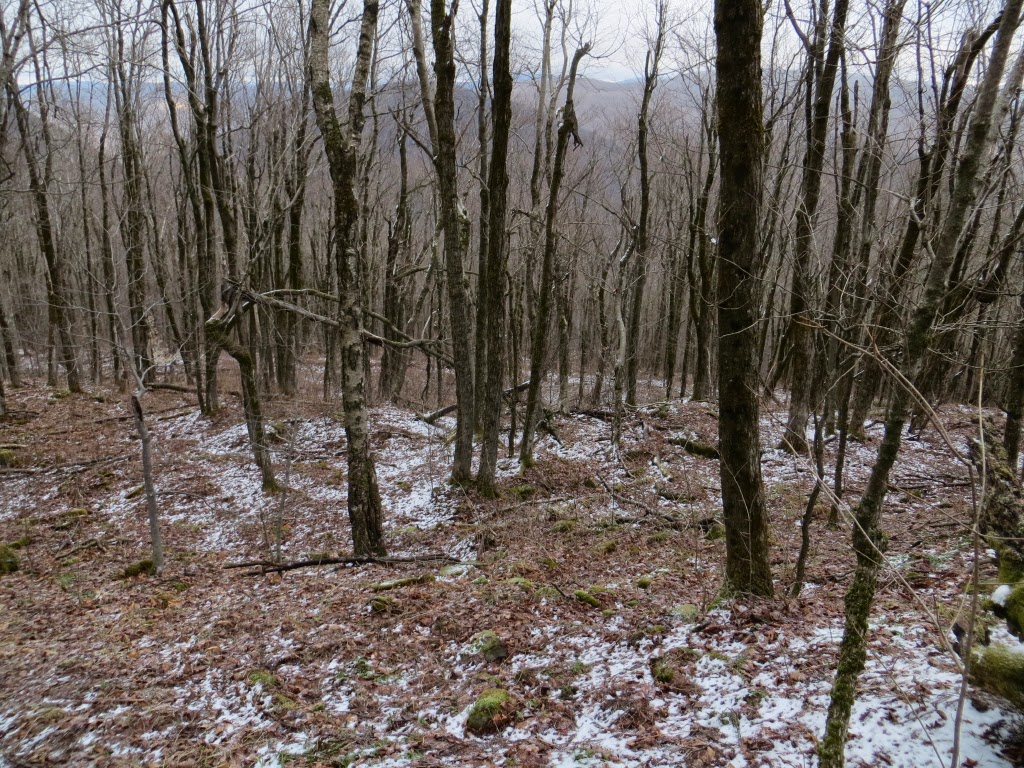 Down through the endless hardwoods I went, making it back to my car before dusk. This was Catskill 3500 peak #22 for me. Still have 13 to go, plus the required 4 winter peaks. Did my first Catskill peak 48 years ago, while in Boy Scouts! 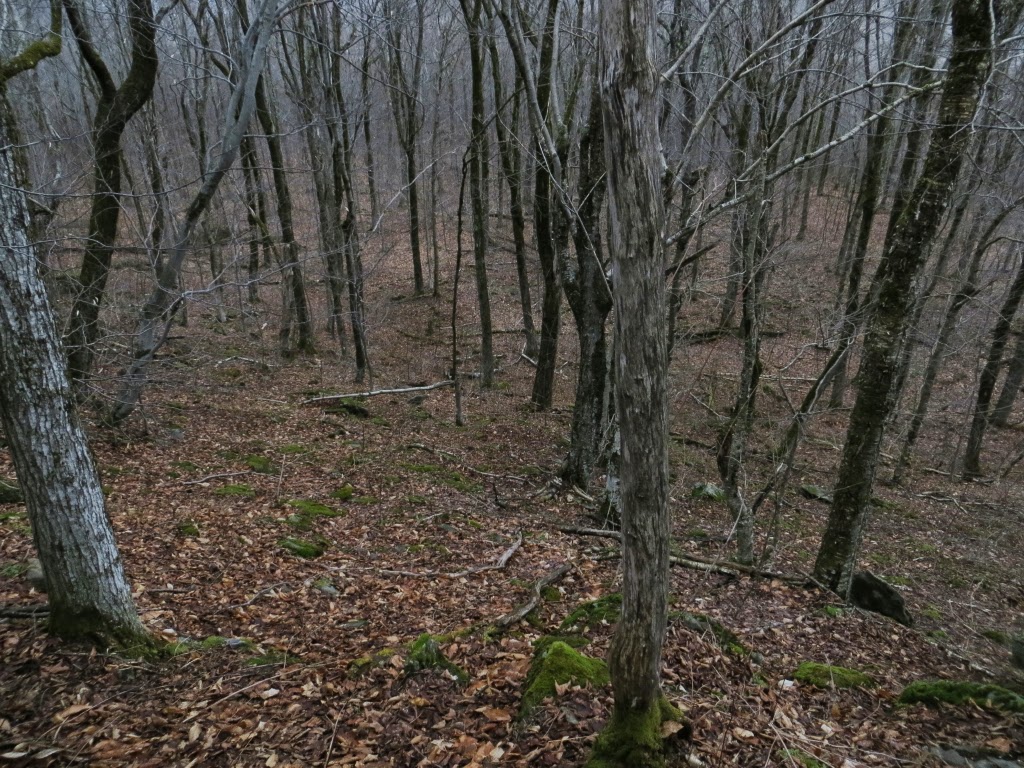