On a hot, sunny, hazy day I rendezvoused with my brother Drew and sister-in-law Kate for a hike up 2582-ft. Mount Roberts, located in the Castle in the Clouds Conservation Area in the Ossipee Mountains. This beautiful area on the NE side of Lake Winnipesaukee is owned and managed by the Lakes Region Conservation Trust. The 30 miles of trails are maintained by a dedicated group of volunteers. The trail up Mount Roberts, maintained by avid hiker Rick Barrie, offers view after view from open ledges and is probably the most popular hike on the Castle property.

We set off in the broiling sun from the hiker parking area at the top of Ossipee Park Rd., on the edge of the Castle grounds. 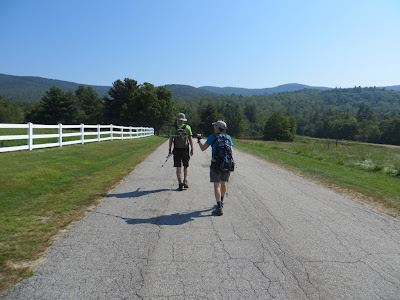 We passed by the Castle riding stables into the welcome shade of the woods. 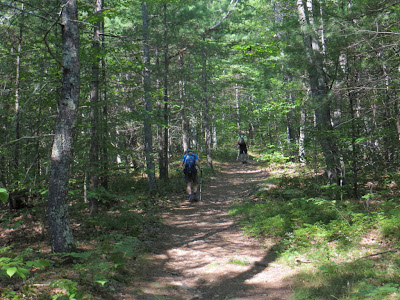 At 1.2 mi. we followed a spur path out to the first viewpoint, here looking west towards Red Hill. The vistas were very hazy, but still rewarding. 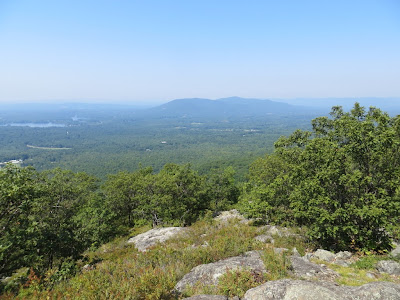 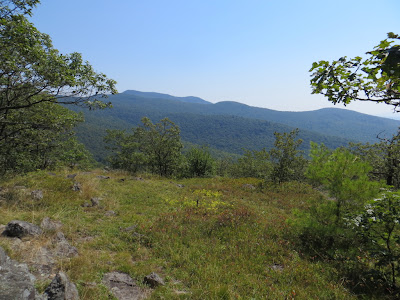 Drew and Kate take in the view from one of a series of fine ledge perches along the south ridge. 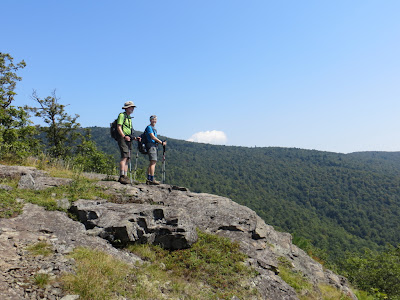 Heading up the open ridge. Did I say it was hot in the sun? 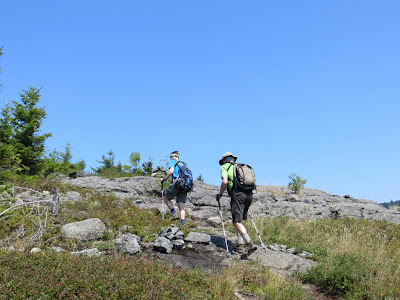 A view down into the valley of Shannon Brook, with Mt. Shaw and Turtleback Mountain beyond. 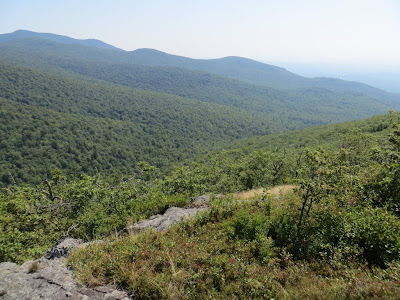 From one of the higher ledges we had a full view of Lake Winnipesaukee. Drew & Kate were spending the week at the AMC camp on Three Mile Island, and they pulled out their binoculars to see if they could spot the island. 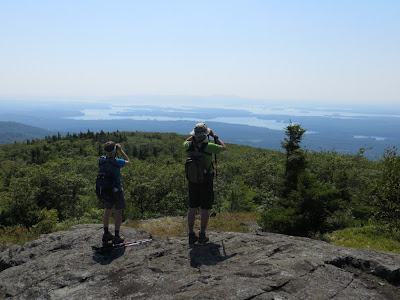 They found it! The recreation hall can be seen on the far left of the island, next to the little satellite known as Hawks Nest Island. 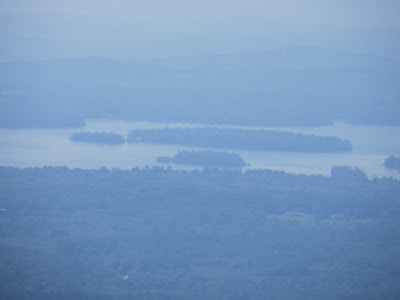 A great day on the ledges! And there were still some blueberries to be picked. 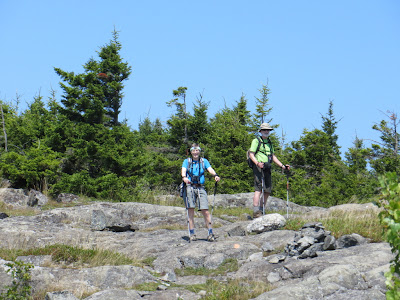 From the old carriage road turnaround on the summit of Mount Roberts, we peered northward for hazy views of the Sandwich Range 4000-footers beyond nearby Black Snout. 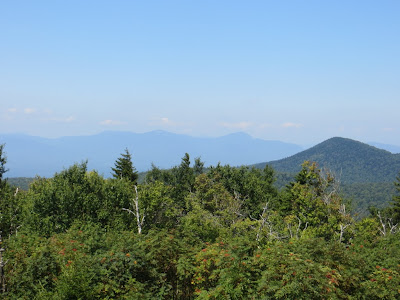 A happy hiking couple at the summit. We spent some time relaxing up here, and two of us took snoozes on the soft grass of the carriage road. 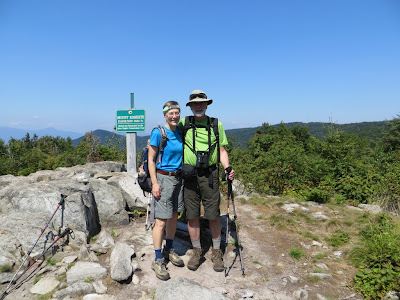 Heading back down into the views. 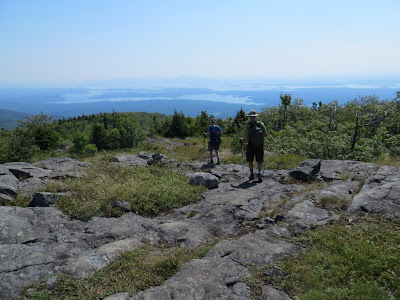 What a great trail! 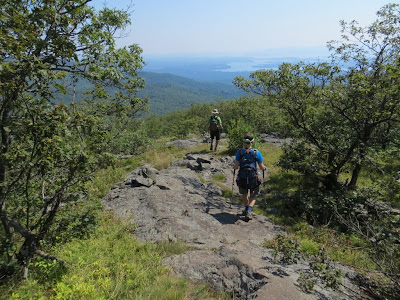 Much of the south ridge is cloaked in an unusual oak forest. Several bear sightings have been reported from this area. 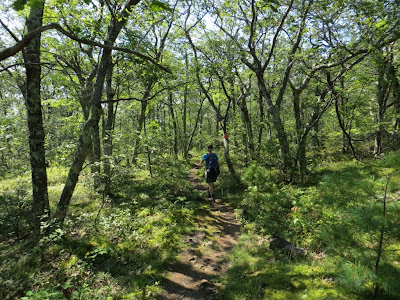 Down near the bottom of the Mount Roberts Trail, Drew and Kate continued on to the trailhead so they could drive back to Meredith and catch the boat back to Three Mile Island, while I headed off to check out several new trails recently opened by LRCT volunteers. First I walked the Settlement Trail, which leads towards a 19th century homestead area known as the Lee Settlement. It follows an historic road, a couple of sections of which are "paved" with cobblestones that date back 200 years. 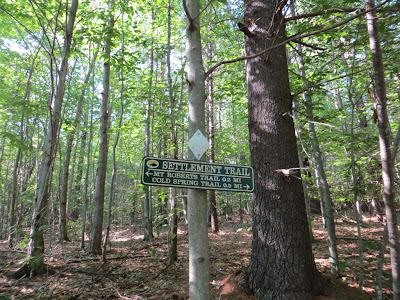 Pleasant walking on the Settlement Trail. 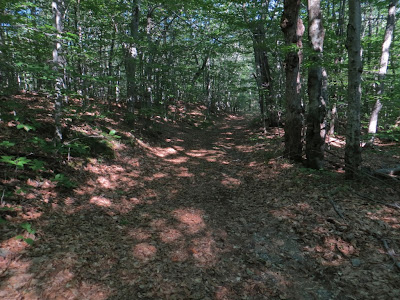 A short way up the Cold Spring Trail is the Roberts Cellarhole - the homestead site of the family for which Mount Roberts was named. 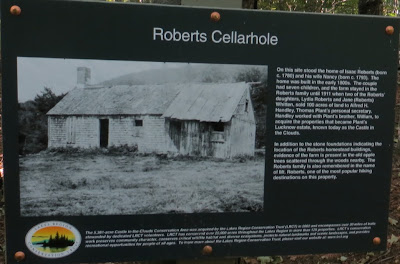 The site has been reclaimed by the woods. 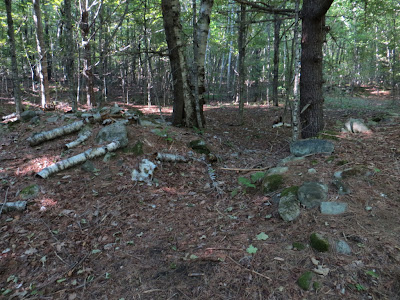 I climbed up a short new trail that connects the Cold Spring Trail with the Faraway Mountain Trail, Love the new signage on the LRCT trails. 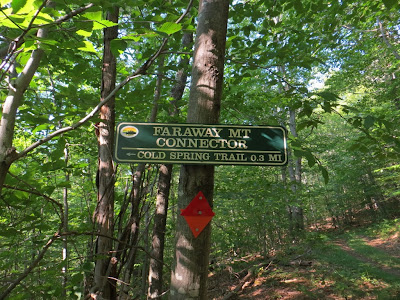 Some neat big old maples back down on Cold Spring Road. 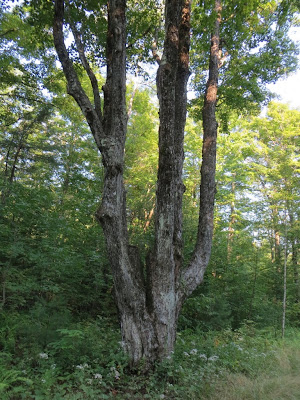 At the start of the new Whitten Trail is another 19th century cellar hole. 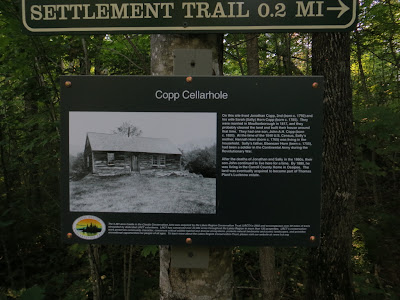 The Whitten Trail leads up past yet another cellarhole, one with a particularly evocative story behind it. 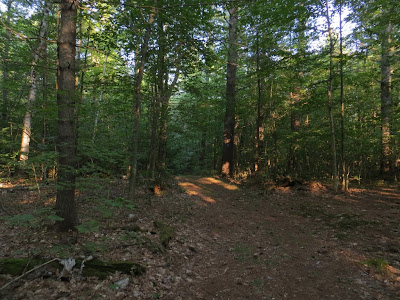 I concluded the hike with an early evening walk around Shannon Pond, with a view across to Mount Roberts (L) and Faraway Mountain (R). 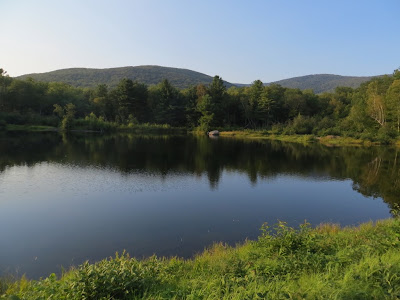