Carol sprung me free for an afternoon hike on what was said to be the hottest day of the summer. With temps expected to top 90 and high humidity, I didn't want to undertake a major climb starting at midday. Instead, I opted for a return to an off-trail area I had visited several times before in the Gale River valley.

Even the easy hardwood forest walking on the Gale River Trail had me panting on this sweltering early afternoon. 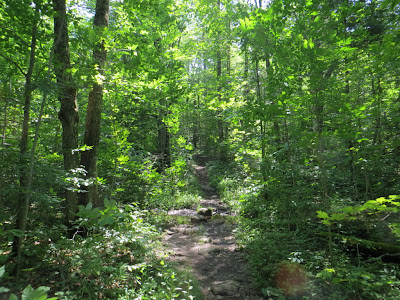 At the crossing of Garfield Stream (a western tributary of the Gale River) on the recently relocated section of the Gale River Trail, I headed off-trail up this side valley. This valley was the original route of the Gale River Trail, up past Hawthorne Falls to the Garfield Ridge Trail in the col east of Mt. Garfield. (The trail to Galehead Hut was then called the Galehead Trail.) This trail section was abandoned in the late 1950s. Some parts of the footway are still evident, if you're accustomed to tracing obscure routes, while other sections have been swallowed by the forest. Some distance up the valley I made my way over to the base of a fine cascade. 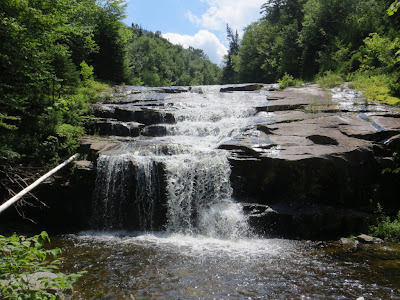 I bushwhacked above the cascade through the woods alongside the brook, past broad sloping granite slabs. 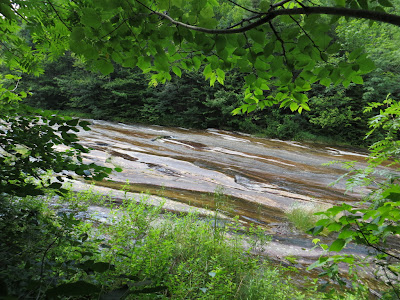 I emerged at the top of the slabs and worked partway down on swaths of dry, grippy ledge. Where the ledges were wet, they were extremely slippery. From one spot Mt. Garfield could be seen far up at the head of the valley. 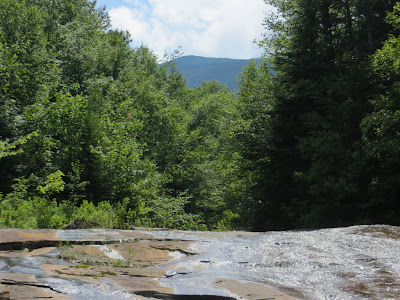 It was blazing hot in the sun on the ledges - too hot to hang out. 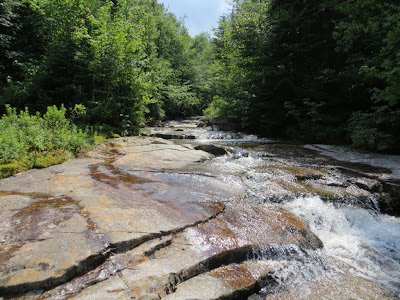 I found a shady spot on the other side of the brook and relaxed for a while, listening to the sound of the water rushing by me on either side. 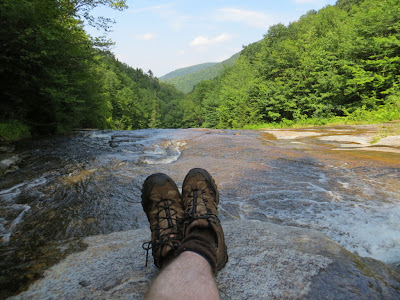 Above the slabs I bushwhacked a short way to the track of an old slide on the south face of Flat Top Mountain (3248 ft.), a trailless northeastern spur of Mt. Garfield. Partway up the old track were these rocks tinted red by some type of lichen. 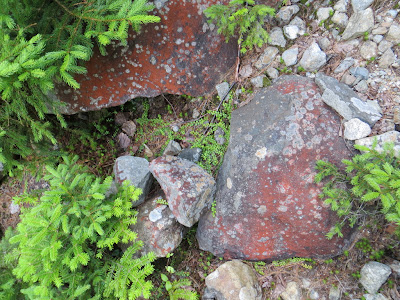 Revegetation is well underway on much of the slide. My best guess is that this slide fell at the same time as the Gale River slide of 1954, which plunged down  to the Galehead Trail (today's Gale River Trail), about three miles in, during torrential hurricane rains. On a 1964 aerial photo, both of these slides look quite recent. 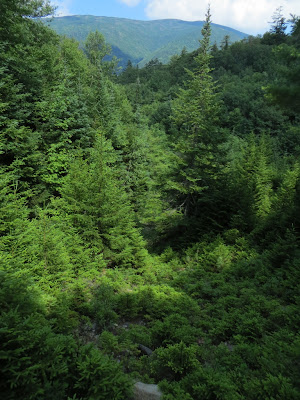 I worked my way up the slide, taking to dense woods along the side to avoid one section of slick ledges. Farther up I passed this interesting wall of dirt that was packed almost as hard as cement. 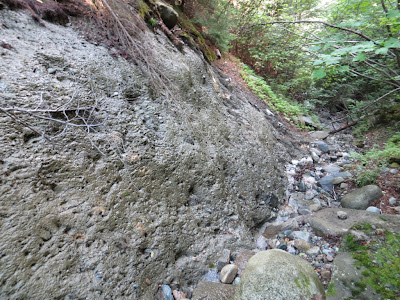 The most open part of the slide is split by a spine of gravel in the middle. 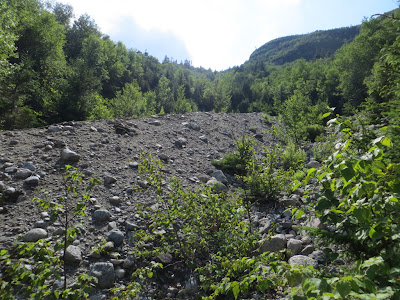 Here there was a nice view of the Twins, rising high and massive from the Gale River valley. 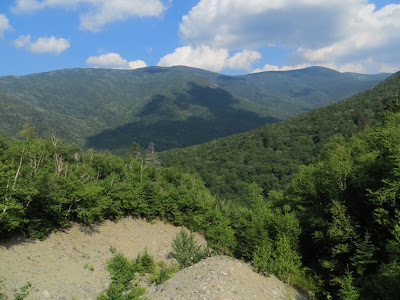 A closer look at North Twin. 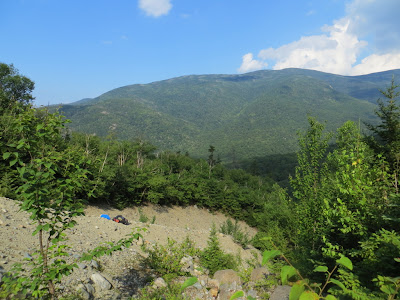 A zoom on South Twin and its two uppermost SW spurs. The roof of Galehead Hut can be seen on the saddle under the spurs. 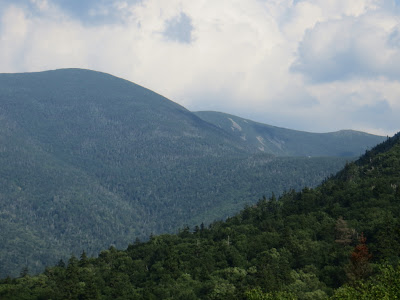 Interesting cliffs on a lower spur of North Twin. I once did a winter bushwhack to the lower set, finding interesting views of the Gale River and Garfield Stream valleys and Mt. Garfield. 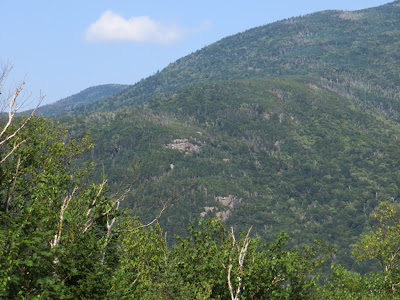 View of the Twins from the top of the open part of the slide. 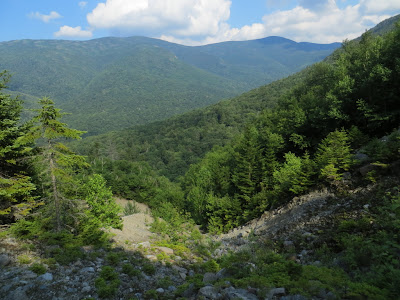 Pearly Everlasting is one of the pioneer plants on the gravel. 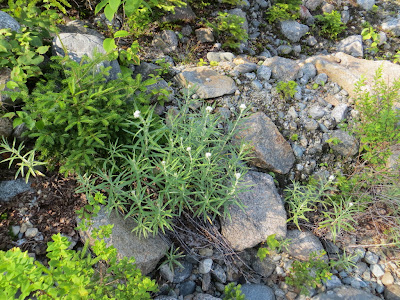 Looking up at the wild cliffs on Flat Top Mountain. Years ago I struggled up to some great perches up there through some very thick and gnarly terrain. It was just too hot to expend that kind of effort today. 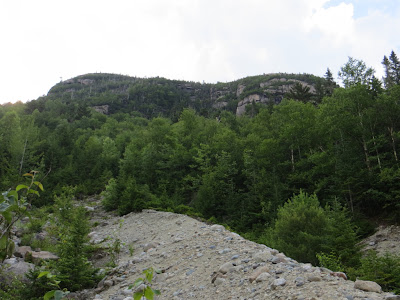 After descending the slide track I came out on Garfield Stream at a small cascade a bit upstream from the slabs. 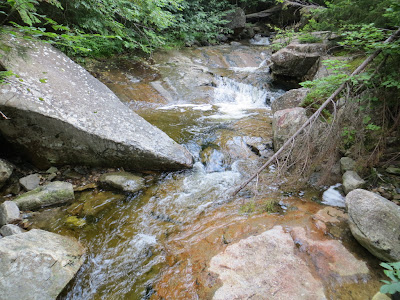 North Twin has its own version of the Giant Stairs - seen from the relocated section of the Gale River Trail. An interesting valley! 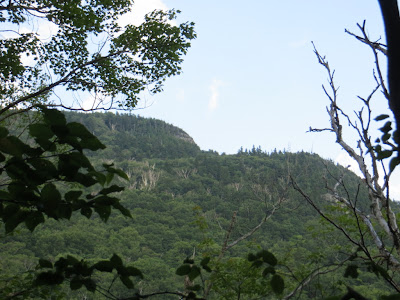