Very sad news this week to hear of the passing of Brutus Rooney, the legendary hiking Newfoundland and faithful companion to Kevin Rooney. Our deepest condolences go to Kevin on his loss.

Brutus was a wonderful dog, and brought joy to all those around him. His hiking exploits with Kevin and the "Brutus Brigade" are legendary. Brutus was the first canine to climb all the NH 4000-footers in winter, finishing on Mt. Pierce in January 2004, and in the winter of 2004-2005 he climbed all the peaks in a single winter.

I was privileged to join Kevin, Brutus and Friends on two winter hikes in 2005. Here are a few photos from those trips in honor of Brutus. 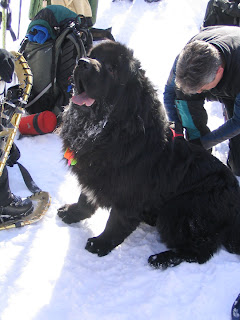 On the way up East Osceola, Brutus takes a break at the Greeley Ponds-Mt. Osceola Trail junction with Cath Goodwin, who has herself climbed a few winter peaks. (She, Steven Martin, and Cindy DiSanto were the first hikers to do all the 4's in a single winter, back in 1994-95.) Cath and Brutus were dear friends, and Cath would bring a variety of delicious treats for "Brutie"on every hike. 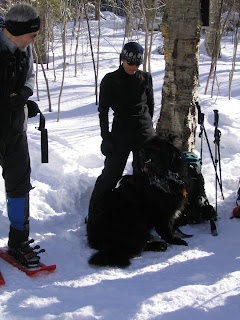 Brutus makes his way up the crossing of the steep slide high on the flank of East Osceola. He could handle an amazing variety of trail conditions, but one place he balked was the slide on Owl's Head. Kevin found another route up the mountain that avoided the slide, and hence was born the "Brutus Bushwhack." 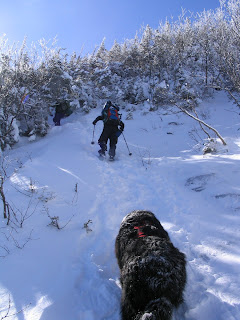 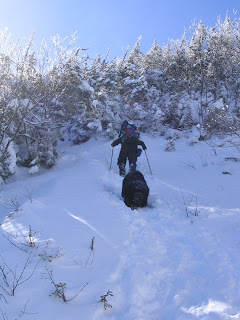 A few days later, my wife Carol and I joined the Brutus Brigade for a hike up Mt. Tecumseh, #46 on the all-in-one-winter list for Brutus. Here the group gathers in the parking lot at Waterville Valley. This was the setting for an interview Kevin did with WMUR-TV, a link for which is included in Kevin's recent post on Views from the Top. 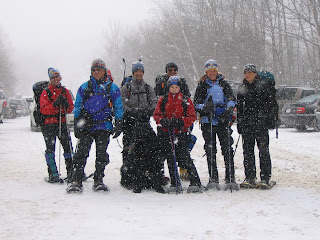 Steven Martin (on the left) was another close friend to Kevin & Brutus and accompanied them on many a hike. On the way up the Mt. Tecumseh Trail we had a chance encounter with Mohamed Ellozy, who was on his way down the mountain. It was great to get a shot of Kevin, Brutus and Mohamed. 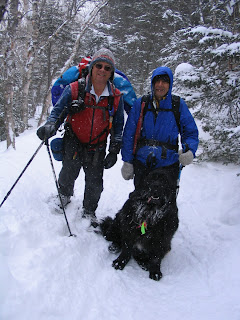 Brutus was a smart hiker and knew when to take a break. This hike was a leisurely and thoroughly enjoyable trek. 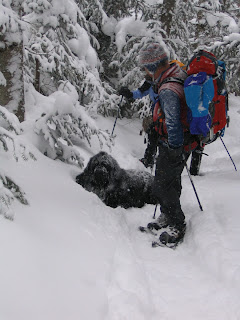 My wife, Carol and Brutus at the summit of Mt. Tecumseh. 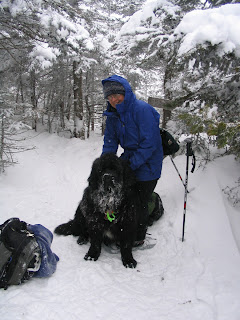 Lunch break at the summit. A few days later, Brutus finished his all-in-one-winter quest on Cannon Mountain, with a large group of friends joining him. 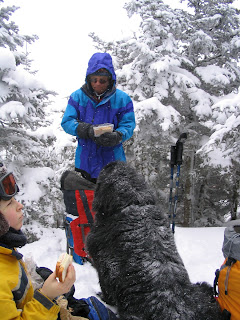 Kevin and Brutus, the best of friends. 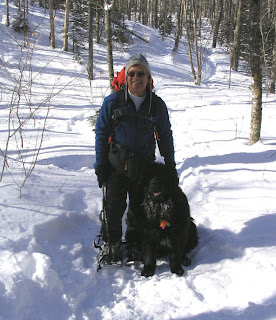