In the course of checking a bunch of trails and trailheads for the guidebook, I enjoyed a pair of 4 1/2 mile hikes on small mountains in the Maine section of the WMNF. Unfortunately, my camera conked out early in the day with a "lens error" message. This is a little cheesy, but I've used photos from earlier hikes on the same mountains to illustrate the second part of this short (by "Mountain Wandering" standards) post.

The first hike was over Little and Big Deer Hills, across the Cold River valley from the Baldfaces. Both Little Deer (1,090 ft.) and Big Deer (1,367 ft.) have fine view ledges, and there's a nice trail network maintained by the Chatham Trails Association that makes various loops possible.
This photo shows the Deer Hills as viewed from the White Cairn Trail on Blueberry Mountain to the north. 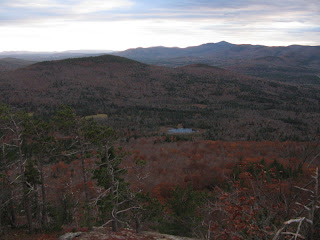 I parked at the Baldface Circle trailhead lot and set out about 7:15 on a gorgeous sunny morning. I followed the Deer Hill Connector to the Cold River, crossed on the concrete abutments of the Chester Dam, and made the moderate climb to Little Deer, where there is a big open ledge at the summit. 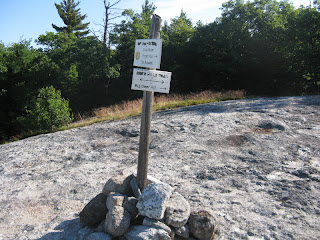 The Baldface Range was all lit up in the morning sun. L to R are Eastman, Sable peering over in back, South Baldface and North Baldface. 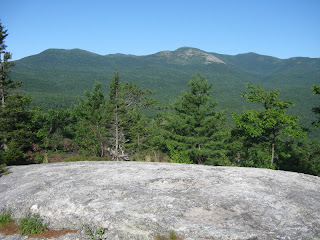 Then I descended partway down the steep Ledges Trail (generally not recommended for descent) to an even better view ledge next to the junction of two short trail segments called the "By-Pass" and "Ledges Direct." From here there was a clear view down to the valley floor. 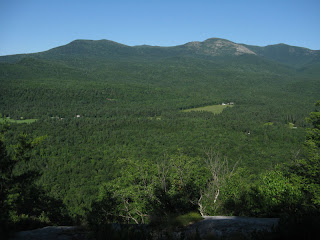 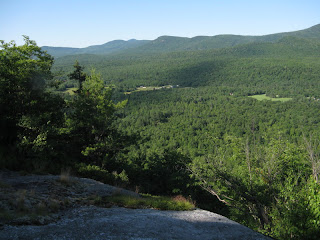 I went down the By-Pass, which is less steep and in the woods, then looped back up on the Direct route. 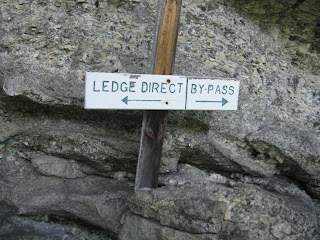 A cool ledge by the lower junction. 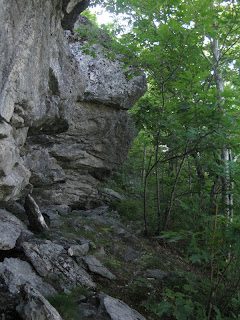 The direct route goes up through a neat boulder cave, with a good scramble above. Fun stuff! After this, the camera ceased functioning. 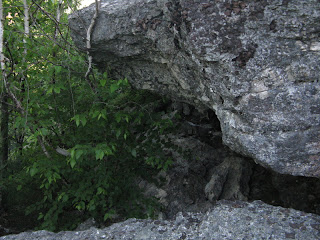 I went back to the summit of Little Deer, then down into a saddle amidst nice open woods of hemlock and hardwoods and up to Big Deer. Just past the summit, a great south-facing crag beckoned for a long break in the sun. Here's a shot taken there on a snowshoe trip a few years ago. The white area in the valley is Deer Meadow Bog. From there the Deer Hills Trail led on a nice descent down the south ridge, with another good outlook. I then took the Deer Hills Bypass back to the Cold River dam, where there are expansive ledges at the water's edge and a nice pool behind the dam. This hike packs a lot of fine scenery into a small package - highly recommended. 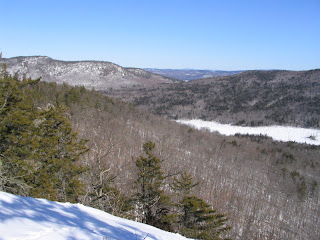 Later in the day, after several trailhead checks, I climbed Albany Mountain from the northern trailhead for Albany Notch Trail on Crocker Pond Road. A part of the Albany Notch Trail has been closed due to beaver flooding, but you can still climb Albany Mountain. There is another potential beaver flooding area 0.4 mi. in, but on this day it was easy to get across on sticks and logs. 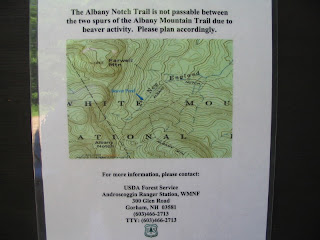 After climbing a mile and a half through the woods, the trail emerges on gently sloping ledges amidst stands of red pine with a partial view to the west. 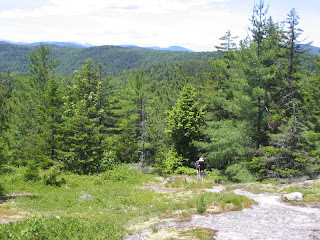 At trail's end, just north of the actual summit, the view is limited, but if you descend 50 yd. east to the edge of the ridge you can find a nice open vista, with Broken Bridge Pond seen down in the lowlands. 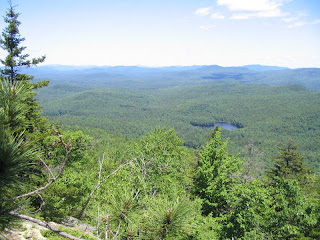 The best views are found by exploring south down the ridge, while trying to minimize lichen trampling. There are cairns all over the place, and a few of them may even be useful for navigation. These ledges have good views to the west and NW; Caribou Mountain is seen in the center. 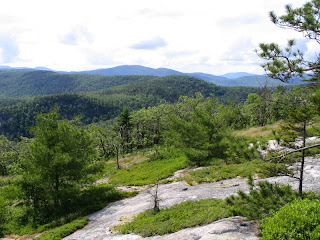 This spot has an unusual view looking down at Number Eight Pond, one of the least-known water bodies in the Whites. Miles Knob and Speckled Mountain are seen beyond. 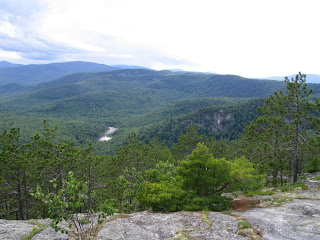 The best spot is at the SW end of the ridge, about 0.2 mi. from the summit. These open ledges offer a sweeping view, including over Keewaydin Lake with Pleasant Mountain beyond... 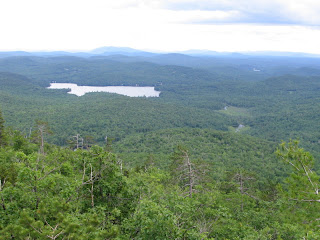 ...and all the way out to Black Cap, Kearsarge North, North Moat, the Tripyramids, Doublehead and the Baldface Range. Virginia Lake, which is in the WMNF, is seen on the L. It probably won't happen, but this spot would make a wonderful destination for a short extension of the Albany Mountain Trail. This is a nice quiet area of the Whites, kind of like the Benton Range on the west, well worth visiting. 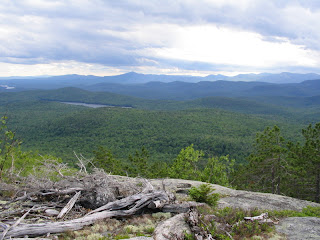