A solo hike to a pair of favorite ponds on a very humid, cloudy morning. Mine was the only car at the parking area for East Pond Trail, 5.1 miles up Tripoli Rd. from I-93. After walking up a logging road for 0.4 mile, I turned left on the Little East Pond Trail. 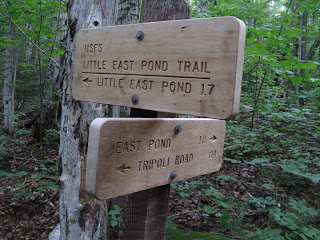 For about 3/4 mile, this follows the grade of the Woodstock & Thornton Gore Logging Railroad (1909-1914), pleasant hardwood walking. 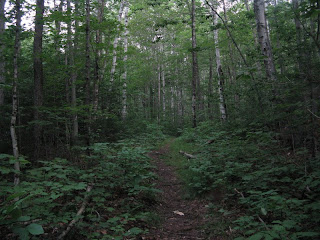 Along the way you pass several small clearcuts ("group selection" in Forest Service lingo) made about 5 or 6 years ago. 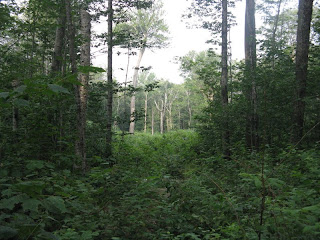 From the end of the railroad grade, the trail swings R and climbs moderately through birches and conifers. 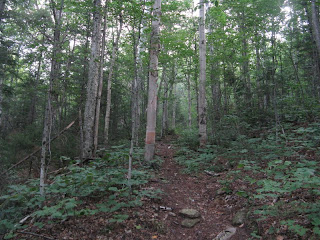 At 2.1 miles the Little East Pond Trail meets the East Pond Loop by the south shore of Little East Pond. This small, very shallow backcountry pond has an intimate beauty, overlooked by several summits of trailless Scar Ridge. The water level is down in this dry summer, allowing easy access to the shore and the views. 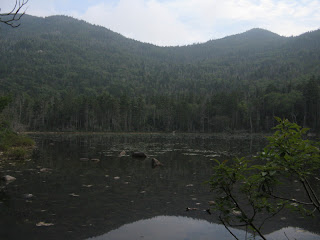 These flowers were growing along the shore. My best guess is Pale St. John's Wort. 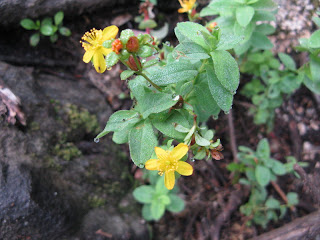 From Little East Pond, the main mass of Scar Ridge, the top of which is one of New England's Hundred Highest peaks, looks enticingly close. In 1987 Mike Dickerman and I bushwhacked to Scar Ridge from here, and as I recall it was not easy. But from recent reports it sounds like the woods on this slope are even thicker and more blowdown-strewn than ever. Most Scar Ridge-baggers now come in from the north side off the Kanc Highway, even though it's a longer whack. 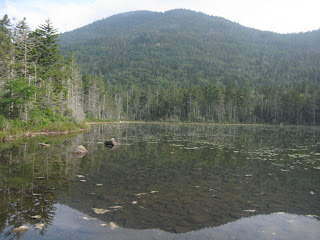 The sharp peak of Middle Scar Ridge is (depending on what version of the list is used) one of New Hampshire's Hundred Highest peaks. From its steep south edge you can peer down at Little East Pond. 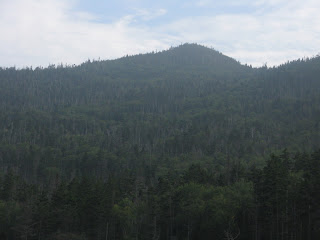 The East Pond Loop is a pleasant meander across the southern slopes of the eastern Scar Ridge peaks. 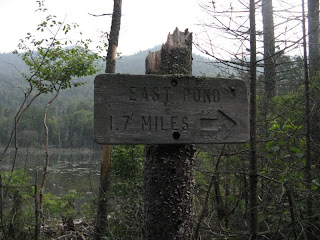 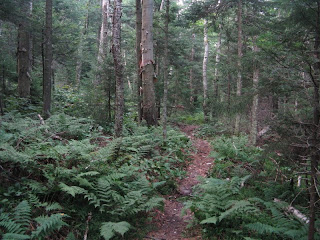 The open shoreline of East Pond makes it seem bigger than its listed area of six acres. Straight ahead is the gap in the ridgeline between Scar Ridge and Mt. Osceola, through which the East Pond Trail passes en route to the Kanc Highway. 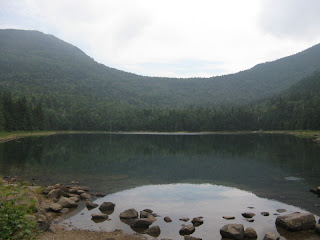 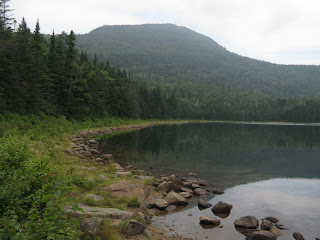 One of the operations associated with the Woodstock & Thornton Gore Railroad was the Tripoli Mill, in which a substance known as diatomaceous earth, or tripolite, was dredged from the bottom of East Pond and hauled down to a mill next to the tracks for processing. Diatomaceous earth has been used as an abrasive, as a filtering material, and for other purposes. As part of this operation, a small dam was built near the outlet of East Pond, part of which can still be seen today, under the water. 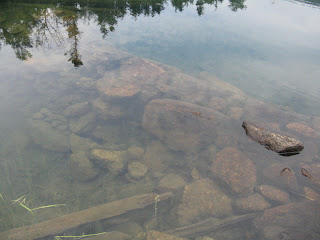 Before heading home, I took a walk up the East Pond Trail along the west shore of the pond. 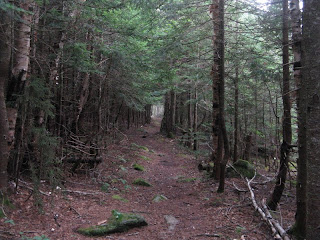 A fisherman's path led to the NW shore for a different perspective on the pond. 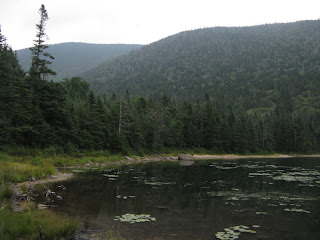 Descending from the pond back to Tripoli Rd., the East Pond Trail follows an old wagon road used for the Tripoli Mill. 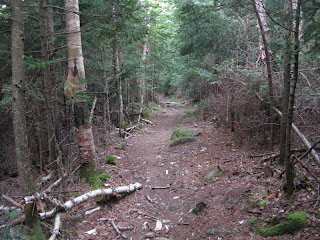 Down near the junction with the Little East Pond Trail, I poked around the mill site. Most prominent are the remains of building foundations, along with bricks and assorted pieces of sheet metal and other items. In this area I also flushed up two woodcocks, a seldom seen bird except during its spring mating ritual. The Tripoli Mill was set up around 1912, but shut down after only a few years due to difficulties in processing the material from the pond. 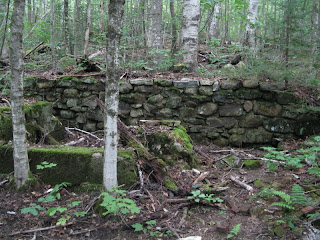 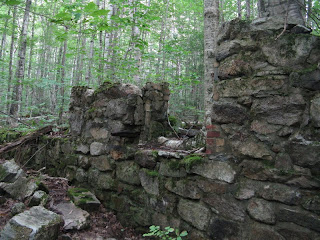 The loop to the two East Ponds is 5 miles with 1000 ft. of elevation gain. There is no steep climbing and it makes for a fine half-day trek on the easy side of moderate.
Posted by Steve Smith at Saturday, August 07, 2010