Mad River Notch, the glacier-carved gouge between East Osceola and Mt. Kancamagus, home of the Greeley Ponds, is one of the most special places in the Whites. I've been in there dozens of times over the years, and a visit rarely fails to please. Looking down into the notch from the slide on East Osceola last week triggered a desire to return there once again.

On a sunny Monday morning, with a warm day on the way, I made a leisurely ramble into the Notch that included visits to both Greeley Ponds, and a bushwhack to a ledge overlooking the Lower Pond.

I got an early start, and there was no sun on Upper Greeley Pond when I got there. 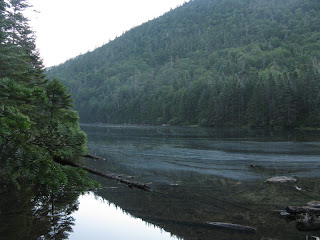 The sun was already beaming down on the more open Lower Greeley Pond. I made a seat from my pack on the little gravel beach on at the NW corner and sat there for a long time, soaking up the low-angle morning sun and listening to a chorus of birdsong. I tallied a total of 20 species during my sojourn there. For those who are interested, a list of species is included at the end of this post. 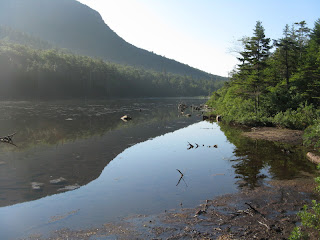 Morning sun on the cliffs of the NE spur of East Osceola. A small white cedar tree - not often seen in the Whites - was growing at the edge of the beach. 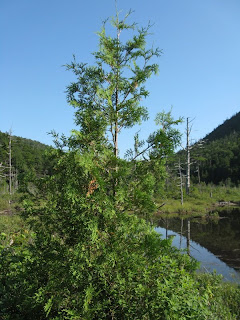 I launched my bushwhack to the ledge (part of an old slide on the slope of East Osceola) from the trail near the shore of Lower Greeley. At first the woods were reasonably open. 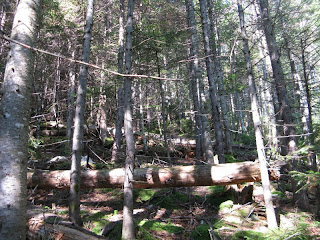 Then it got steep and thick, really thick. In the process of bulling through these tightly woven small trees, I lost a favorite old water bottle, pulled right out of its zipper pocket. 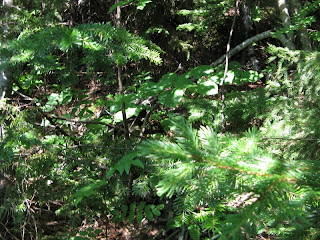 After some trial and tribulation I made it to the top of the ledge, where I could see part of Lower Greeley Pond. 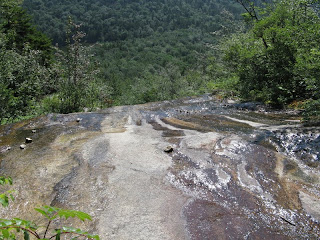 From the side of the slab I found a better perspective on the pond, with the south ridge of Mt. Kancamagus rising beyond. 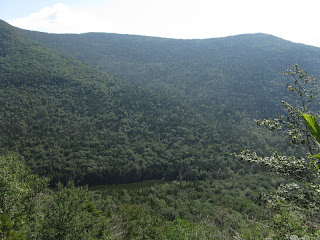 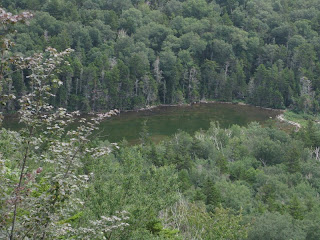 These tufted grasses were thriving in a crack that runs across the steeply sloping ledge. 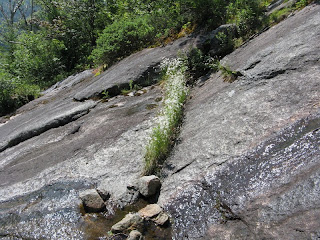 The wavy lower part of the slab. 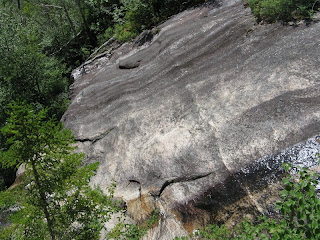 From a ledge rising above the north edge of the slab, I enjoyed an interesting view of the Tripyramids rising above Flume Peak, with the SW ridge of Kancamagus on the L. 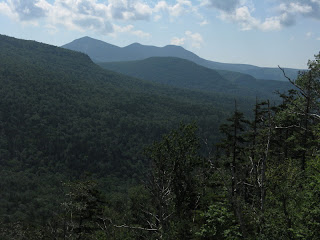 A closer view of the Tripyramids. Later in the day the sun would highlight the North Slide. 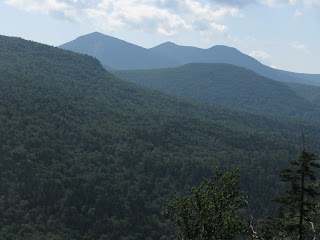 Across the Notch I could see the "K1 Cliff" on Mt. Kancamagus, along with the talus slope below it. Around 1910, Watervillians including Nathaniel Goodrich blazed paths to this cliff and another known as "K2." The paths were abandoned within a few years. One recent April I attempted to snowshoe down to this cliff from the ridge above, but it was too steep and gnarly. 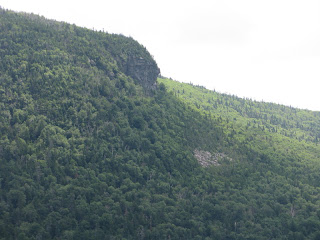 Instead, I visited a huge rock below the cliff that jutted skyward from the forest. This spot offered a close look up at the K1 Cliff. 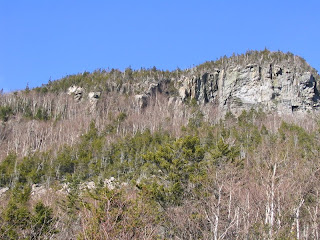 From today's ledge, I could also see the "K2 Cliff" on the W knob of Mt. Kancamagus, overlooking Mad River Notch. That would be a steep bushwhack! 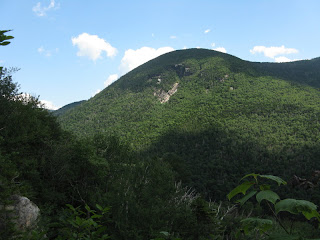 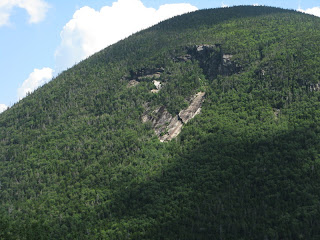 After a last look down at Lower Greeley Pond from above, I made the dense bushwhack back down to the trail. No sign of the lost water bottle. I proceeded to the SW corner of Lower Greeley, where the vista N provided a profile of the Notch. 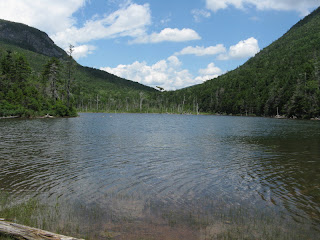 Here there was a different angle on the K2 Cliff and W knob of Kancamagus. 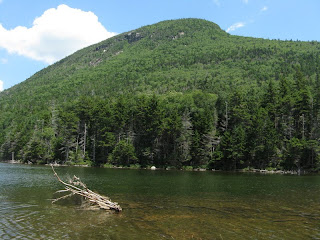 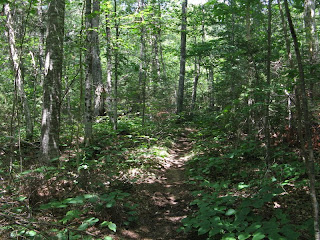 ...for a look at the young Mad River as it tumbles southward from the ponds. 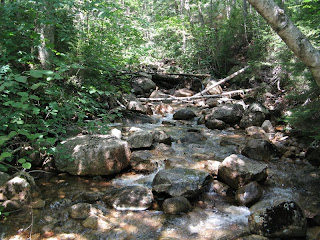 Back at Lower Greeley, I checked out an old beaver dam. 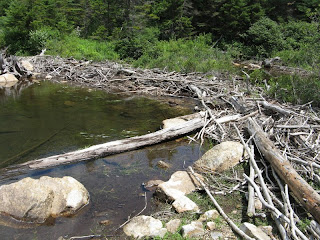 From the SE corner of the pond, I could see the Painted Cliff (L) and the slab I had visited earlier (lower center). 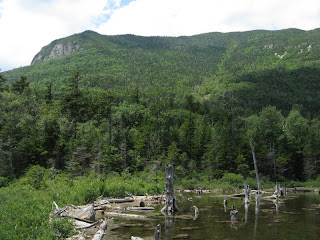 A closer look shows that the slab is part of an old, mostly overgrown slide. 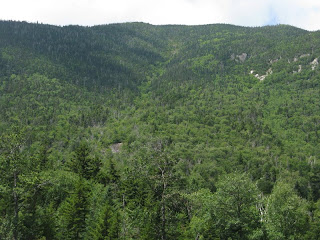 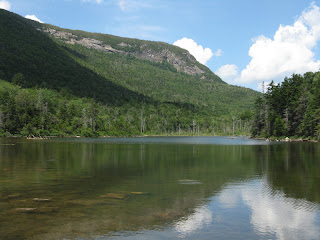 Back at Upper Greeley Pond, on the little beach on the SE shore, behind which a shelter was once located. It was removed in the 1960s due to overuse, and camping was (and still is) prohibited at the ponds. 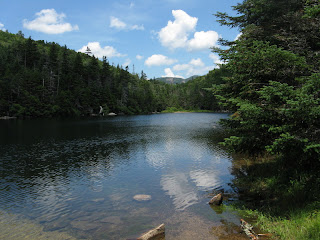 Looking across at the cliffs on the East Osceola spur. 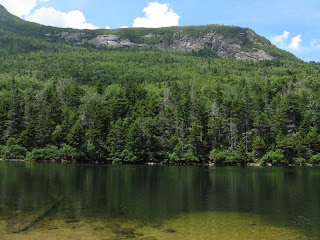 Peering up at the high, wild ridge of East Osceola. The Mount Osceola Trail traces a steep route in the right-center of this photo, though the outline of the trail isn't visible. 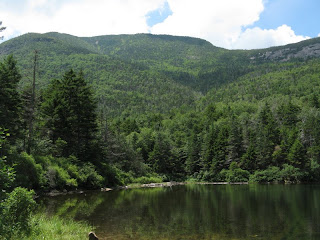 On the way out, I paused to admire this interesting trailside rock, the guardian of Mad River Notch. 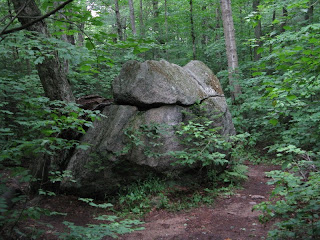