When we only have an hour or two, the two-mile loop around The Flume and The Pool in Franconia Notch State Park is one of our favorite winter treks. In its short distance there's a wonderful variety of scenery, and there are enough ups and downs for a bit of a workout. And, it being the off-season, admission is free! There is plenty of plowed parking at the Flume Visitor Center off Rt. 3 (or Exit 34A off I-93).

We went there the day after the massive storm that delivered a heavy wind-driven rain to the western valleys and dumped heaps of snow at the higher elevations; this was the same storm whose fierce winds knocked down countless trees and left hundreds of thousands of NH residents without power. At The Flume there was only a thin layer - maybe two inches - of wet snow atop the solid track tramped out by many previous winter visitors. Off track, the snow was very mushy posthole material. MSR snowshoes were ideal for the springlike conditions on the track.

After descending to cross the Flume Covered Bridge, we climbed past partly open, sheet-like cascades on Flume Brook. 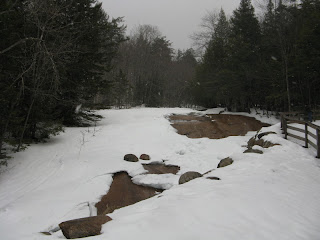 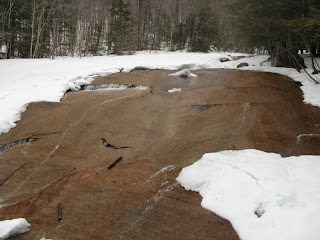 We ascended to the top of The Flume, where a short side descent provided a closeup view of Avalanche Falls. 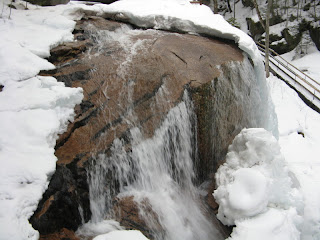 Many ice formations adorn the walls of The Flume in winter. 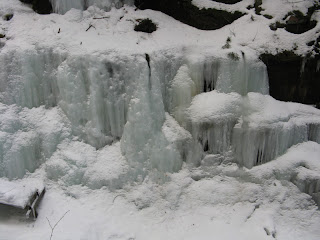 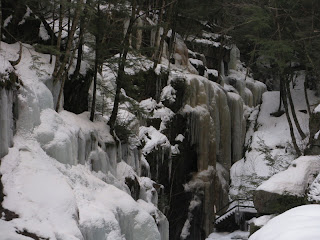 From the top of The Flume we followed the "Ridge Path" through a fine northern hardwood forest, with the ridges of South Kinsman glimpsed through the trees. 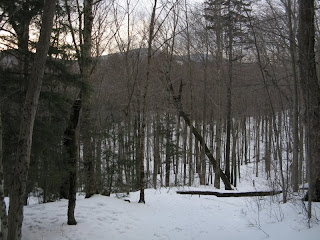 Along the descent to The Pool, I made a side trip down to view the Liberty Cascades, using the untracked snow beside the icy staircase. 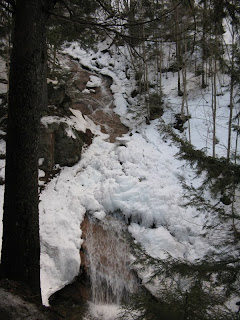 The cliff on the west side of The Pool had its own ice sculpture. 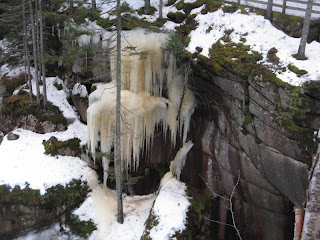 The Sentinel Pine Bridge provides a lofty passage over the Pemigewasset River. 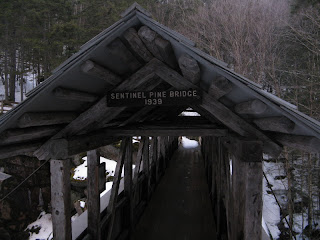 The view from the bridge, looking downstream over The Pool; the lower part of Hardwood Ridge is in the distance. 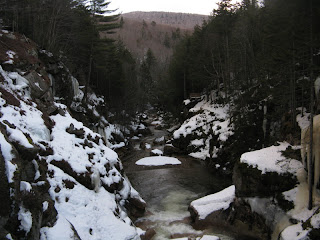 Ice formations on the east cliff of The Pool. 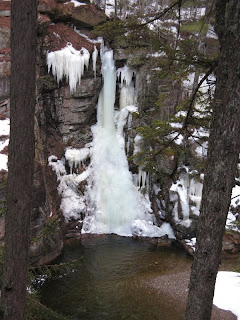 A cleared view up to Mt. Liberty is one of the highlights of the loop. 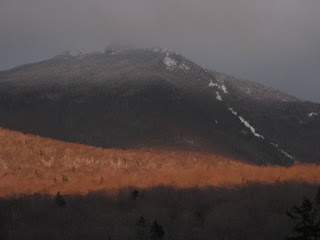 From the edge of the opening you get a peek N to Little Haystack, on the far L of the picture. 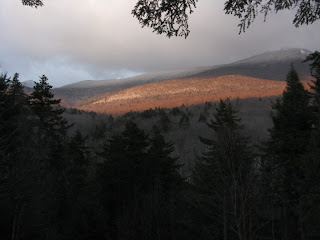 The meander back towards the Visitor Center leads past a number of large glacial boulders. 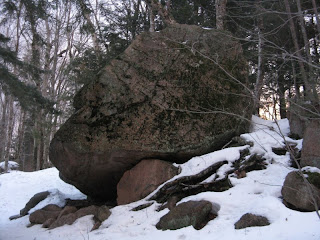 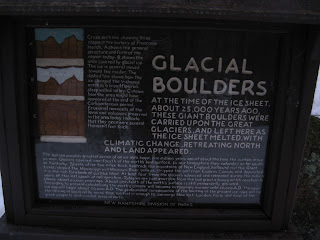 We spent a leisurely hour and forty minutes ambling around the loop. It's highly recommended if you're looking for an easy, rewarding outing in the snow.