OUT AND ABOUT IN THE MOUNTAINS.....

Posting a few photos from some shorter hikes we've taken earlier this month...but first, congrats to Tom Ryan and Atticus Finch, the dynamic man-and-dog hiking duo who have been roaming the mountains together for several years now and spent two winters bagging 4000-footers for the Jimmy Fund and then Boston's Angell Animal Medical Center. Tom's lyrical writeups of their adventures became staples on the Views From the Top hiking forum (www.viewsfromthetop.com) and in local newspapers, and are also found on Tom's blog (tomandatticus.blogspot.com).

For the last couple of years Tom has been working on a proposal for "Following Atticus," a book that would share their remarkable story with a larger audience. Last week Tom and his agent signed a major contract with William Morrow, a division of Harper Collins and the publisher of the hugely popular dog book, "Marley and Me." The deal calls for "Following Atticus" to be published in spring 2011. Rights have also been sold for publication in Italy, and an England publishing deal is in the works. Can a movie be far behind? Way to go, T & A! Also, the duo will be appearing on the "Dogs 101" show on the Animal Planet cable TV network on October 10. Here's a photo of Tom & Atticus taken a couple of winters ago on the Pine Bend Brook Trail on Tripyramid. 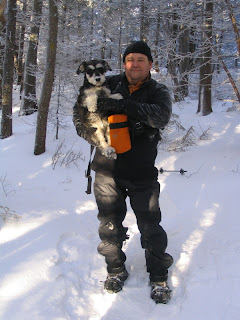 One evening a couple of weeks ago I did one of my favorite short hikes with a good view - up the Benton Trail on the NW side of Mt. Moosilauke to the outlook over Little Tunnel Ravine. This trek is 2.6 miles round trip with a solid 1100-ft. climb and gives you a "big mountain" feel for a minimal investment of time. On the middle section of the climb there is some fine open hardwood forest. 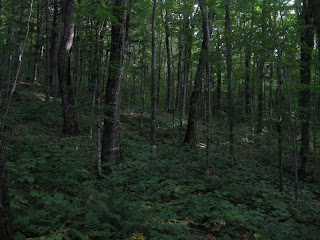 The ledgy outlook is just left of the trail and offers a nice vista north to the Kinsmans, with Mt. Cabot in the distance on the left. 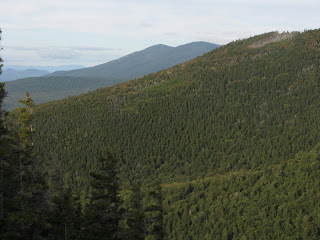 The most unique view here peers into the wild depths of Little Tunnel Ravine. Down there on Little Tunnel Brook is a series of waterfalls once known as the "Nine Cascades." We hope to investigate that later this fall. 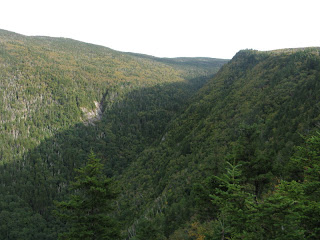 This impressive rock slab adorns the wall of the ravine. The top doesn't look very accessible, but it might be worth a try... 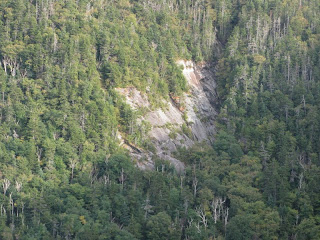 Another recent evening hike was up to Eagle Pass on the Greenleaf Trail.This is the wild rock cut between Eagle Cliff and the NW shoulder of Mt. Lafayette. The hike there is 3 miles round trip with 1000 ft. of elevation gain, with many switchbacks along the way. When you first emerge in the Pass you traverse beneath an impressive cliff face. It is slightly unnerving, however, as rockfall from a cliff such as this will occur sooner or later. 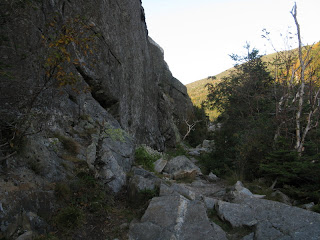 On the south side of the Pass is a new slide that apparently fell at the end of July during one of the countless rainstorms we had earlier in the summer. On August 1st it was informally named "Hansen Slide," after hiker John Hansen of Rumney, who was among the first to see it. 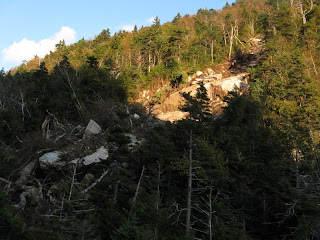 Some impressive destruction at the base of the slide, which is just a few yards from the trail. 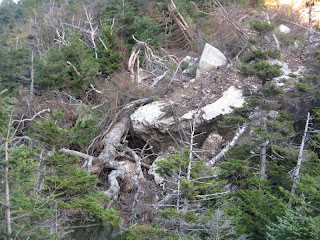 On the north side of the trail is a particularly tenacious tree. 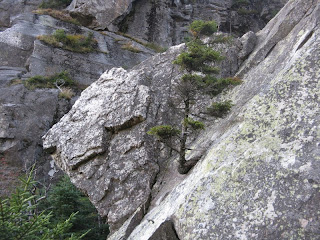 From a large trailside rock in the pass there is an unusual view of the Cannon Cliffs, with the SE ridge of South Kinsman beyond. The only demerit to this spot is the highway noise rumbling up from I-93. But if you go 200 feet farther along the trail to the east end of the pass, you'll find silence amidst a remarkable mossy glen. Eagle Pass is well worth the short climb! Took a stroll at Lincoln Woods on a spectacular fall morning, with foliage colors starting to pop out brilliantly. I always like to check out the view upstream to Mt. Flume from the bridge over Franconia Brook. 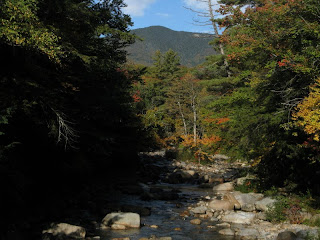 The Forest Service trail crew has built some great "turnpiking" over muddy areas on the path to Franconia Falls, making it a much more pleasant walk. 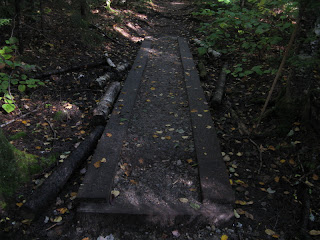 I approached the falls along the brook from the downstream side, passing this "alligator rock." 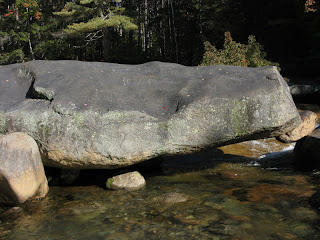 The lower cascade at Franconia Falls. 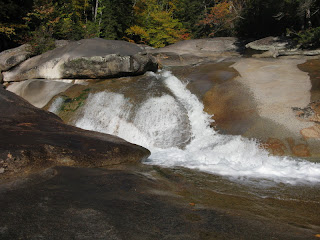 I scrambled up the slabs beside the cascade and came to this view of a classic waterspout pouring into a pool. (The granite ledges were surprisingly slippery under my well-worn Vibram soles, so caution is advised.) 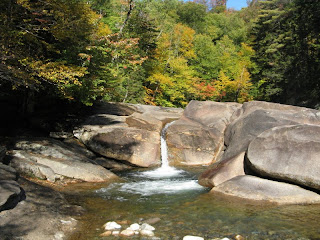 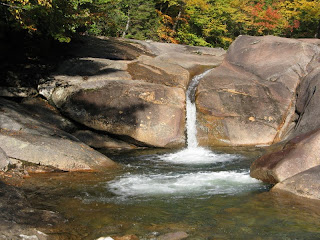 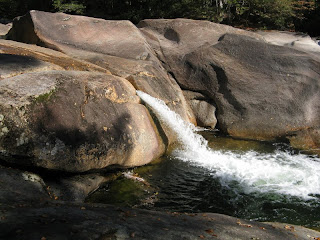 Whenever I go the the falls, I end up on the big flat ledge at the top. It's a great place to relax and gaze downstream, where North Hancock's rounded bulk can be seen over the treetops. 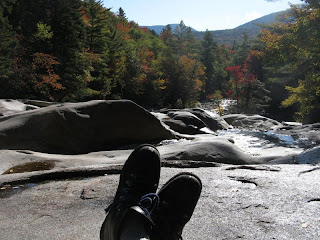 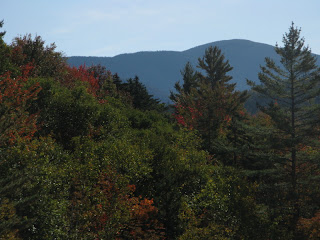 On the way back down the falls side trail I caught this glimpse of wild Northwest Hancock. 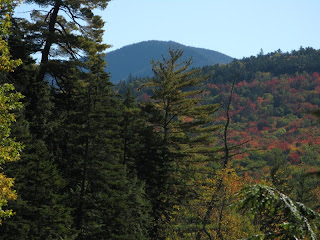 North of the Osseo Trail junction I hopped out on rocks in the East Branch for the great view upstream to Bondcliff and its sharp south spur. The Lincoln Woods Trail may be drudgery at the end of a long hike in the Pemi, but I always enjoy it as a couple hours' walk for its own sake. 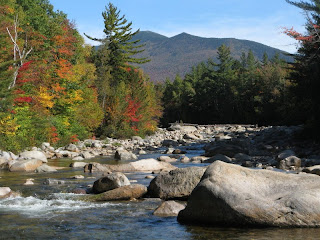