Mark Klim and I enjoyed great snowshoe bushwhacking conditions on a trek up a northern ridge of East Osceola to a ledge with a beautiful view down Mad River Notch. A sunny but cold and windy day.

The thaws and refreezes have set up a solid snowpack in the woods. 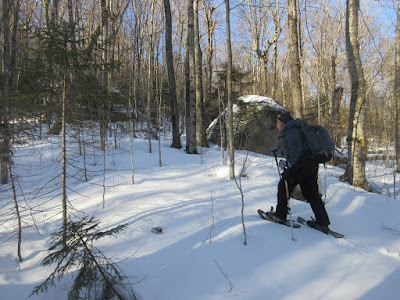 Heading up the ridge, into the sun. 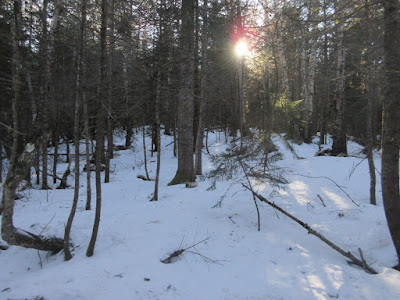 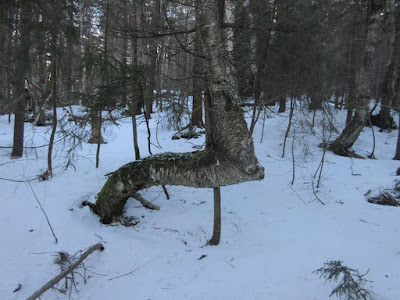 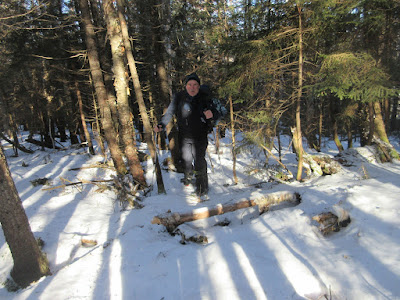 Blowdown from the October storm. 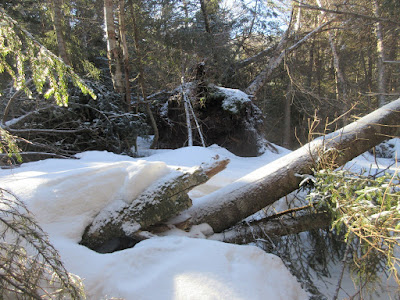 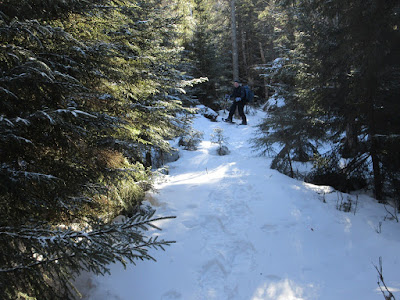 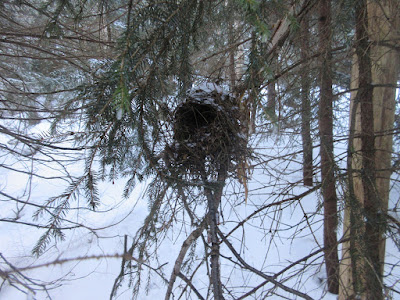 Steep and prickly on the push up to the ledge. The final flat approach was very thick. 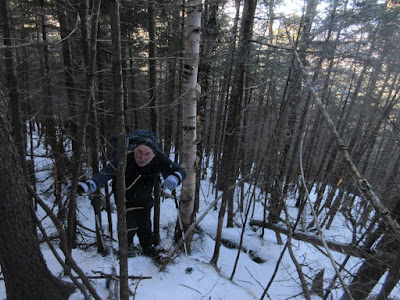 It took 2 1/2 hours to ascend what seemed like a long 1 1/2 miles. As we hoped, despite a temp in the single numbers, it was reasonably warm here in the sun and out of the bitter NW wind. 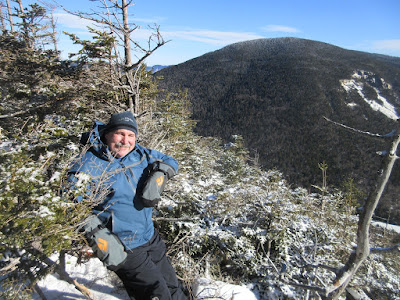 The view over the Greeley Ponds and Mad River Notch is one-of-a-kind. This was my third visit here on snowshoes within the last 5 years. 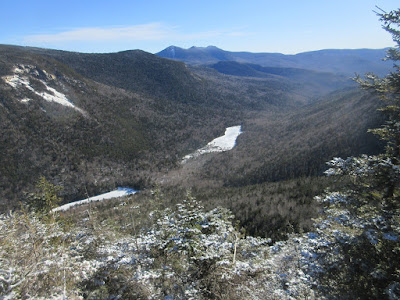 A favorable angle on the Tripyramids. 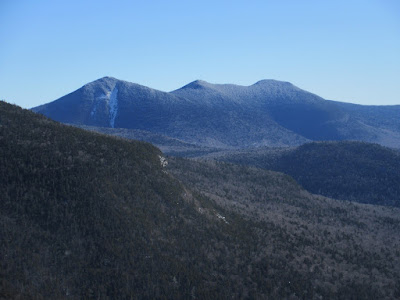 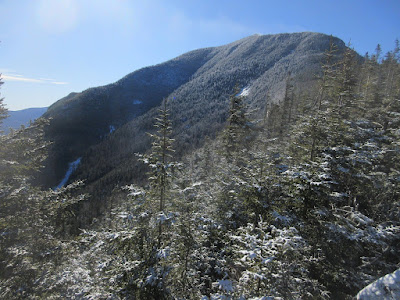 An icy slide on East Osceola. This is occasionally skied, but not right now. 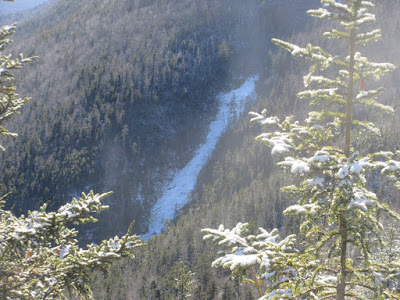 The winds really picked up while we were at the ledge (gusting to 91 mph on Washington), forming a snow plume on East Osceola. 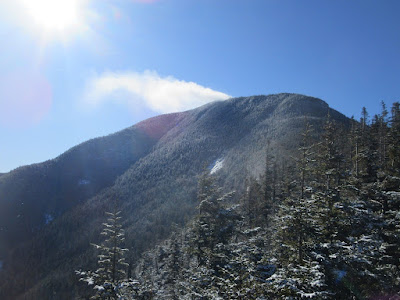 On the east side of the notch is the western knob of Mt. Kancamagus, and the K2 Cliff. 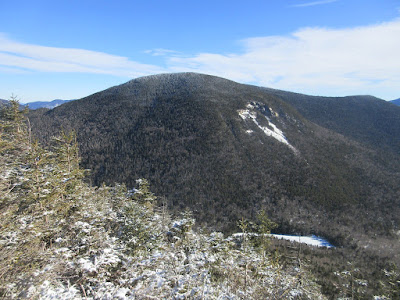 Parting shot, after a 1 1/2 hour sojourn on the ledge. 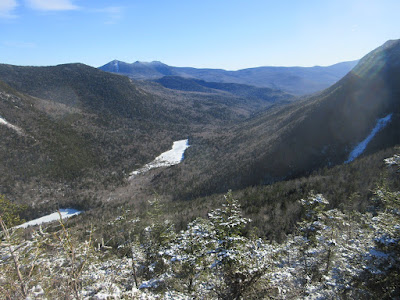 The arrow shows the location of the ledge, as seen from Lower Greeley Pond. 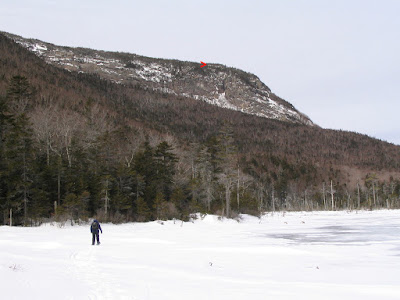 The NW wind blasted us as we descended the steep, thick and sunless slope behind the ledge. This was as cold as I've been all winter. 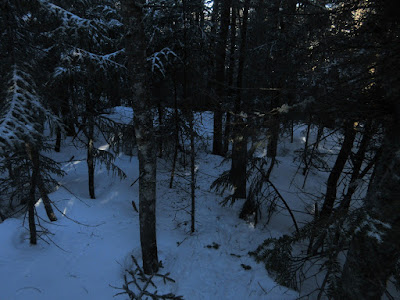 Mark checks out a pole that was bent while descending the steep section. 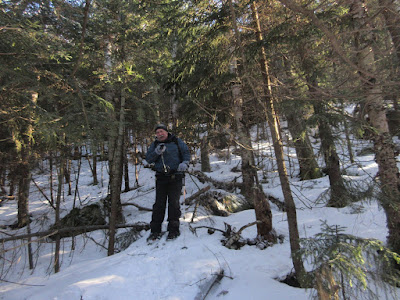 I had a pretty good frost beard going. 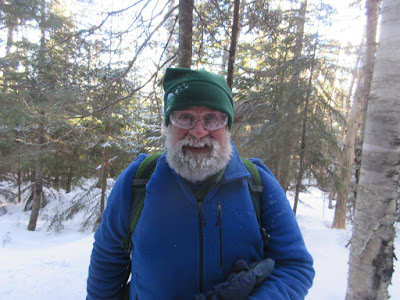 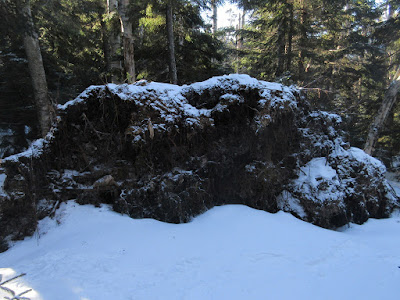 Good woods for a bit on the gentle part of the ridge. 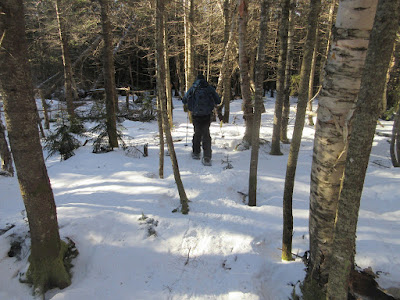