On the first clear, non-humid day in a long time, Carol watched the store and sprung me free for a hike to an old favorite, Mount Garfield. Due to a morning appointment I got a late start on the Garfield Trail - a bit before 11:00 am - but that was not an issue with the luxurious daylight hours of early summer. 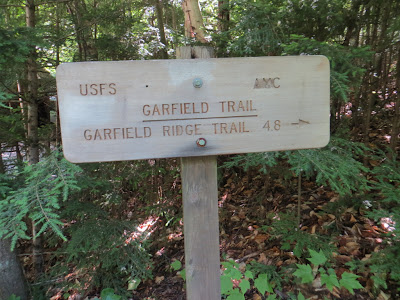 The first 0.7 mi. of the Garfield Trail leads along a mini-ridge with some fine hemlock forest. 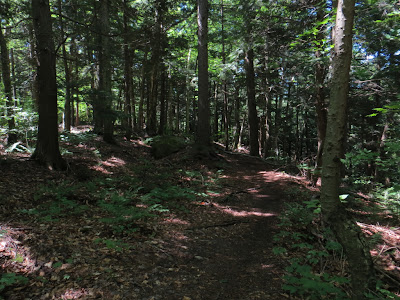 A mile in, the trail crosses Thompson Brook, then two parts of Spruce Brook near the point where these two brooks merge. It seems like there's now an extra crossing here where part of Spruce Brook is running down the trail, perhaps caused by Tropical Storm Irene [?]. 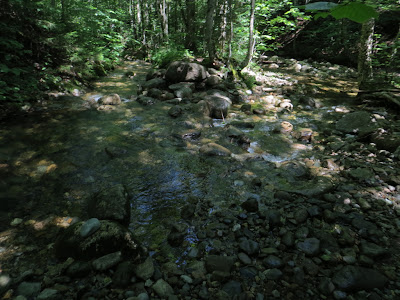 For a long time the Garfield Trail leads on an easy and occasionally moderate upgrade through a vast area of northern hardwoods. 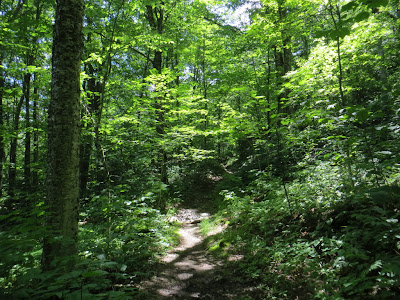 At 2.6 mi., about halfway to the summit, this flat rock next to a small brook is an inviting break spot. 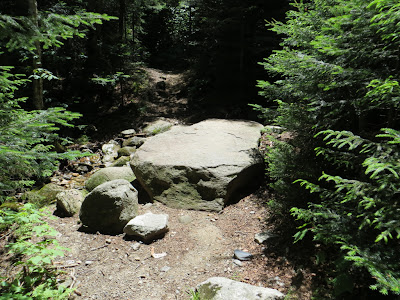 Above here the trail passes through an area burned in a 1903 forest fire, now grown largely to white birch. A small knob here was once called Burnt Knoll. 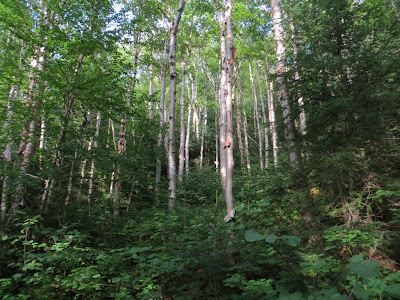 The easy to moderate grades continue up through conifer forest along several switchbacks, following the route of an old tractor road that served the fire lookout station on the summit of Garfield (in operation from 1940-1948). 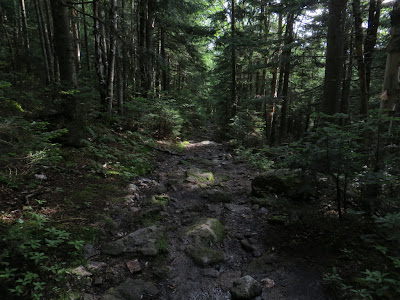 As part of today's hike I wanted to visit pretty little Garfield Pond, tucked into a fold at the western base of the summit cone. I hadn't been there for a few years. I decided to head over to the pond on the way up, in part following the route of the old Garfield Pond Cutoff. This trail led from the Garfield Trail to the old Garfield Pond Shelter and Garfield Ridge Trail. Due to overuse and deterioration of the surrounding area, the shelter was removed in 1971 (to be replaced by the Garfield Ridge Shelter on the east side of the mountain), and the Cutoff was abandoned. I had used this semi-bushwhack route a few times in the 1990s, and wanted to check out its current situation. If you know where to start, the old footway can be followed for much of its length, but several sections are either blocked by blowdown, are completely overgrown, or are under water, so it is now in part a true bushwhack. Not really recommended as a summer route. I came out behind the north shore for a view across the pond to the summit crest of Mt. Lafayette. 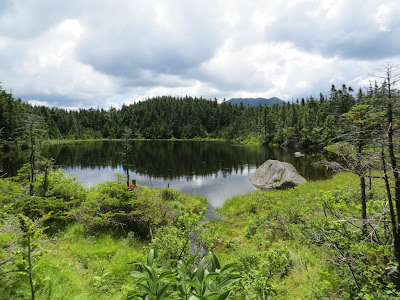 Near the shore the terrain is wet with fragile moss, so I whacked through drier (and fairly thick) woods to the west of the pond, eventually picking up a herd path that led to the Garfield Ridge Trail. From the trail, a well-used side path descends rather steeply to a rocky spot on the south shore, where you can get a good view of this peaceful high-country pond. I sat here for a while on a low and rather uncomfortable rock and listened to a chorus of Swainson's Thrushes mixed in with other songsters such as Nashville Warbler and White-throated Sparrow. 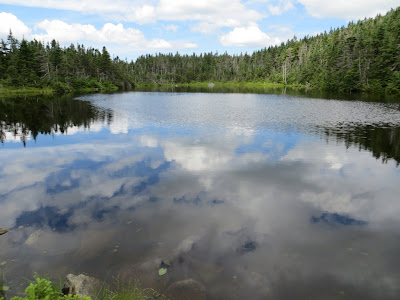 Then it was time to tackle the fairly steep and rough 650-ft. climb to the summit of Garfield. This was the only scrambly spot on the ascent. 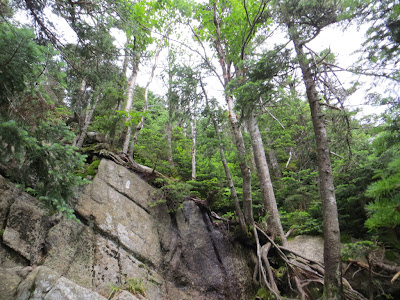 Above here I made a short, thick bushwhack to a small clifftop with a 180-degree westward view that included a look across the western Garfield Ridge to the Franconia Range... 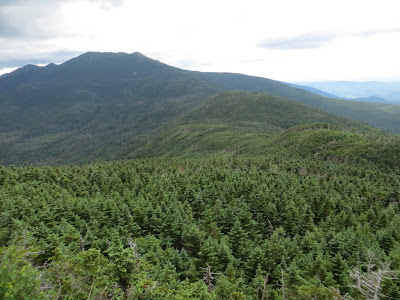 ...and an interesting perspective on Garfield Pond.... 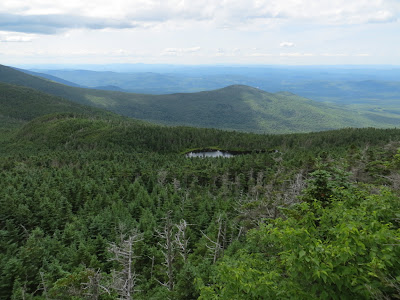 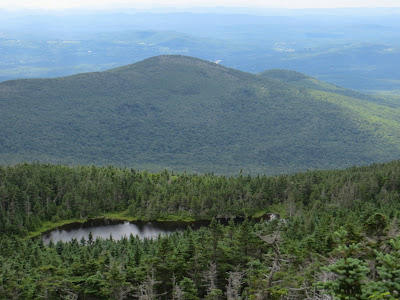 The Garfield Ridge Trail, living up to its reputation. 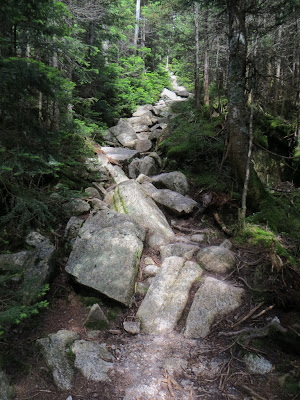 Approaching the top, a ledge to the right of the trail offers a look ahead to the summit rocks and the foundation of the old fire lookout.... 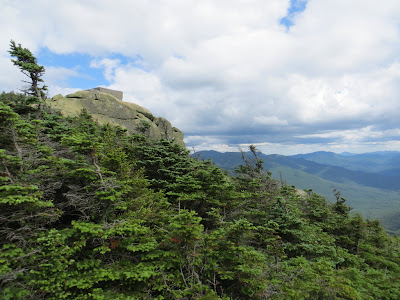 ....and out to Owl's Head and the western Pemigewasset Wilderness. 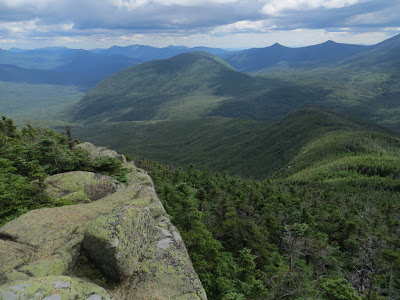 I arrived at the summit around 3:30 pm, expecting that there would be a number of folks enjoying the view. To my surprise - on one. I had this spectacular summit to myself on one of the nicest days of the summer, and no one came by during my entire two-hour summit sojourn. One of the benefits of a late start. Garfield is known among hikers as one of the best viewpoints in the Whites, and today did not disappoint, with 80+ mile visibility under partly sunny skies. One of the classic vistas is the broadside perspective on the Franconia Range, rising from the wild inner recess of the western Pemi. 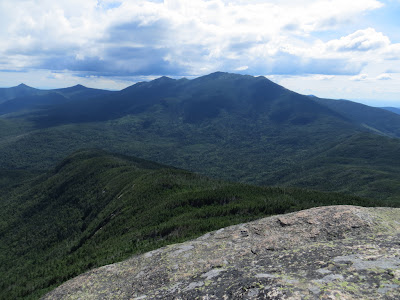 To the east, the massive and lofty Twins, with several craggy Presidentials peering over in back. 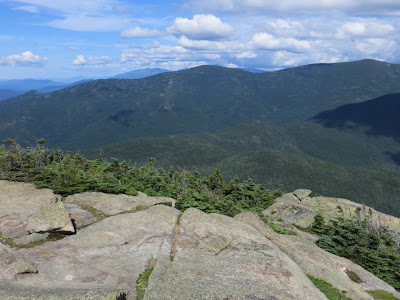 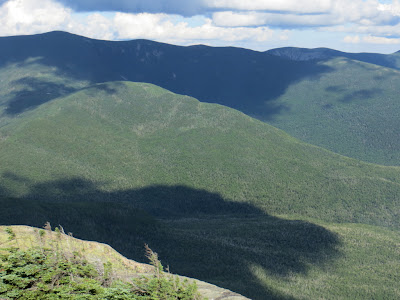 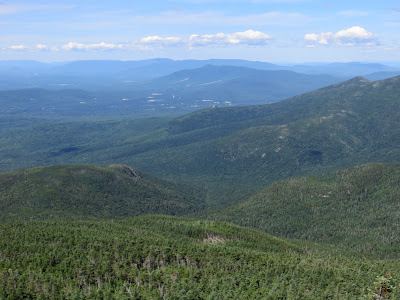 What a great spot to lounge while gazing at Owl's Head lurking out there between the Franconia Brook and Lincoln Brook valleys. 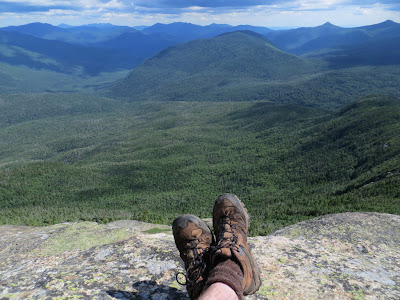 Ridges flowing off the Bonds into the Franconia Brook valley. 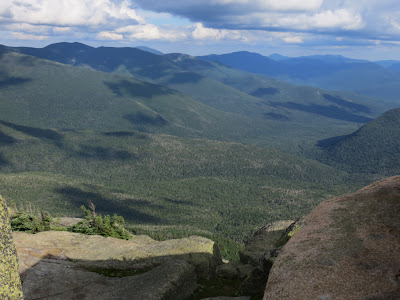 The creased crags of Bondcliff, with the tip of Mt. Chocorua peering over in back. 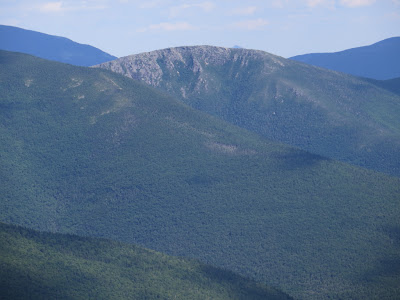 The Franconia Brook valley all lit up. 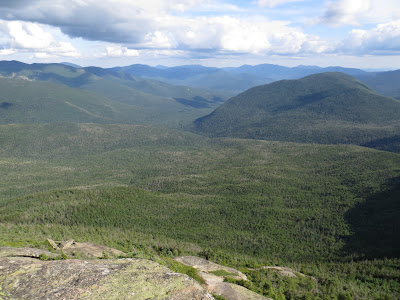 Evening shadows creeping in at 5:30; time to head home. As I was leaving the summit, the caretaker for Garfield Ridge Campsite came by for a quick look. 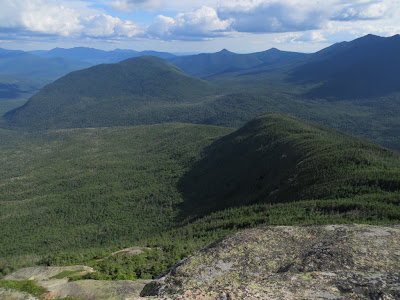 I met one other hiker down at the Garfield Ridge/Garfield Trail junction, making a total of just nine for the entire day. I saw no one on the 4.8 mi. descent from here. Seen below are some mature balsam firs in a ferny glade along one of the upper switchbacks. 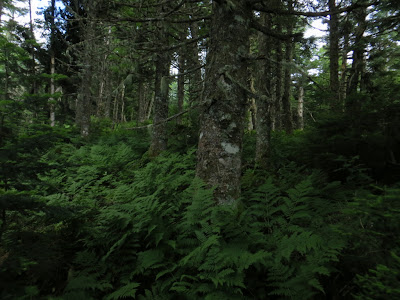 Evening sun lighting up some open woods around 3200 ft. With its easy to moderate grades, the Garfield Trail is one of the more pleasant descent routes from a high White Mountain summit. Good trail, great peak. 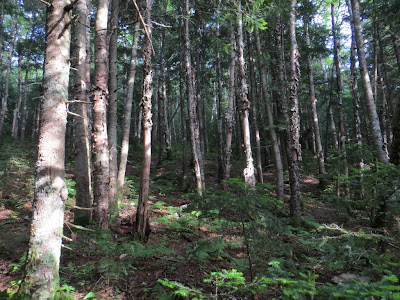