I was intrigued when reading about the quiet backcountry spot called Nebraska Notch, hidden away on the south side of Mt. Mansfield. After our glorious ridge walk to the summit of Mansfield, I wanted to sample one more Green Mountain flavor before heading home to New Hampshire. We drove out several miles from Route 100 on Moscow Road and Nebraska Valley Road to a parking area at the private Lake Mansfield Trout Club.

The route into Nebraska Notch from the east follows the Lake Mansfield Trail, which starts on the club grounds. For more than 100 years the club has graciously provided hikers access across their land. I set off from here late in the afternoon while Carol stayed in the car, reading a good mystery. 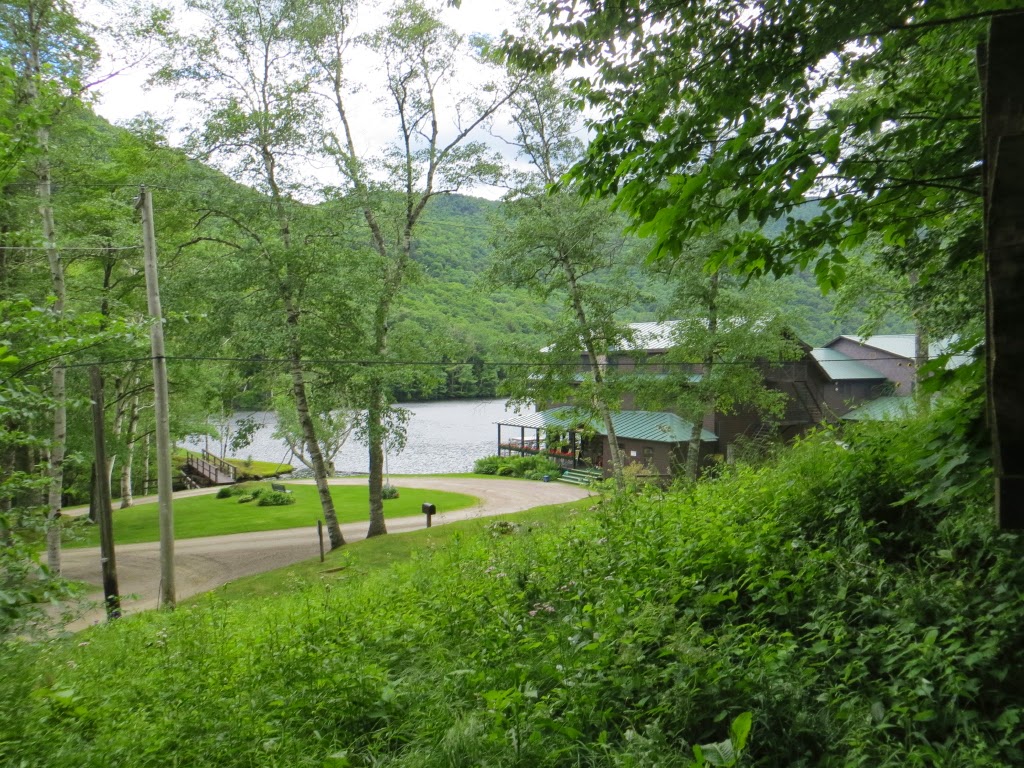 The trail parallels the lake shore in the woods above, but does come briefly down near the edge for a glimpse of the water. Hikers are requested to stay on the trail while crossing the club's land. Once past the lake, the trail enters the 40,000-acre Mt. Mansfield State Forest. 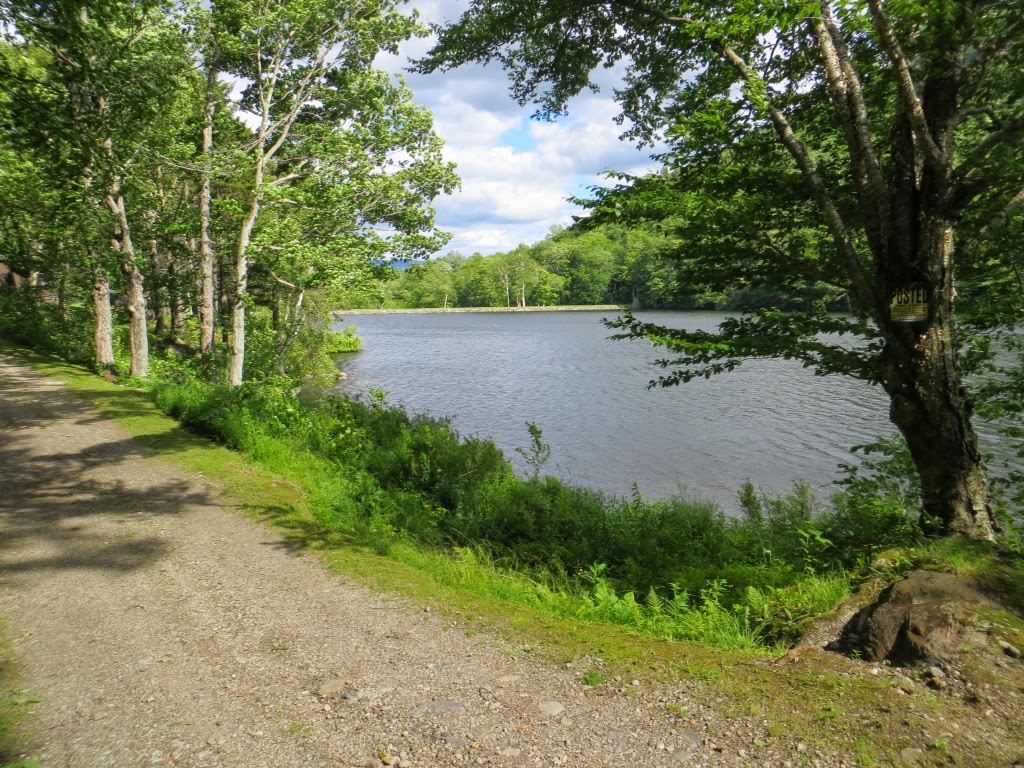 Please stay on the trail so that hiker access will continue! 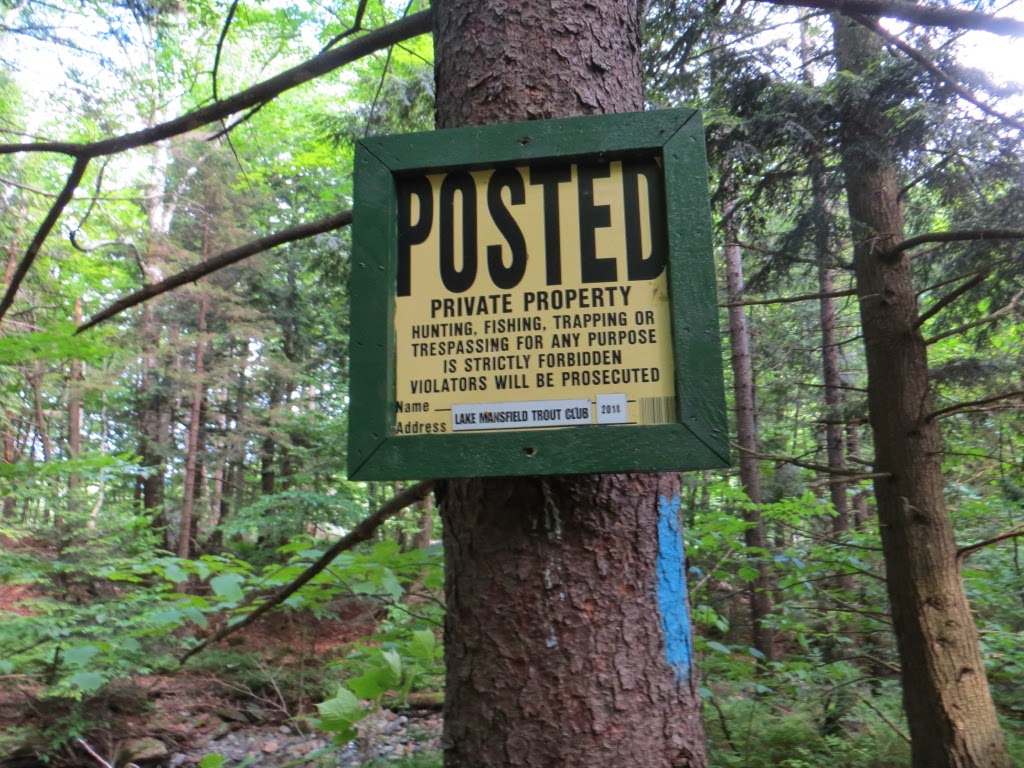 Lake Mansfield seen down through the trees. 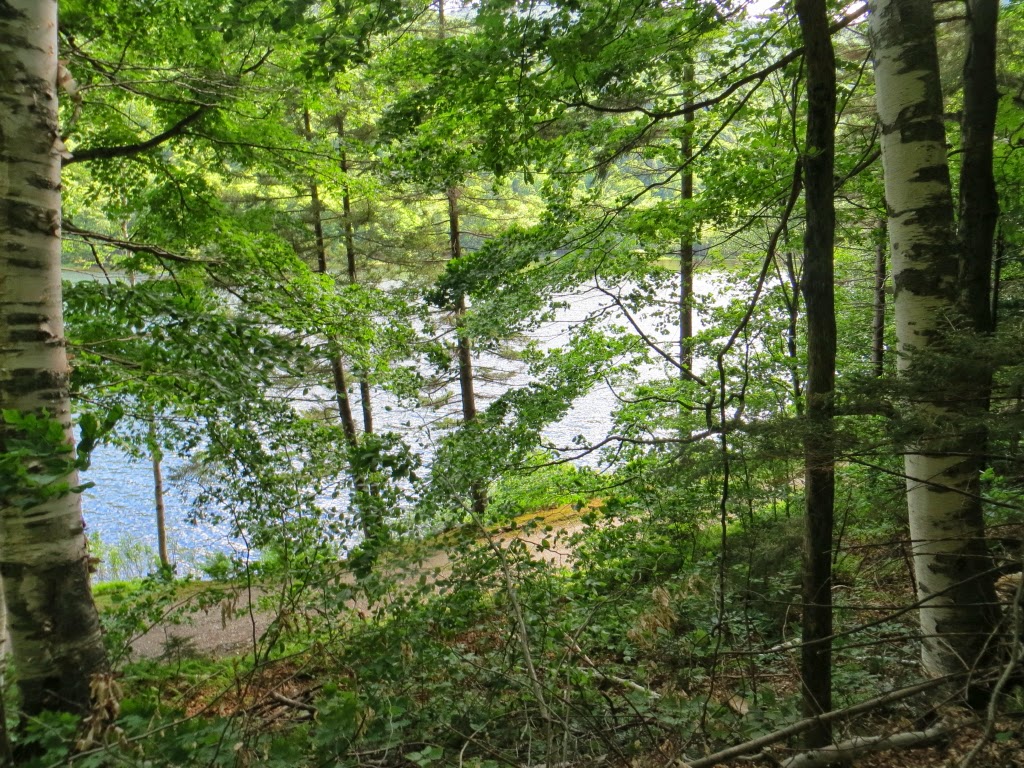 After a mile of mostly easy going, the trail begins a steady, rocky climb up to Nebraska Notch. After passing a veiled view of a waterfall, the trail curves around the head of a ravine in fine hardwood forest. 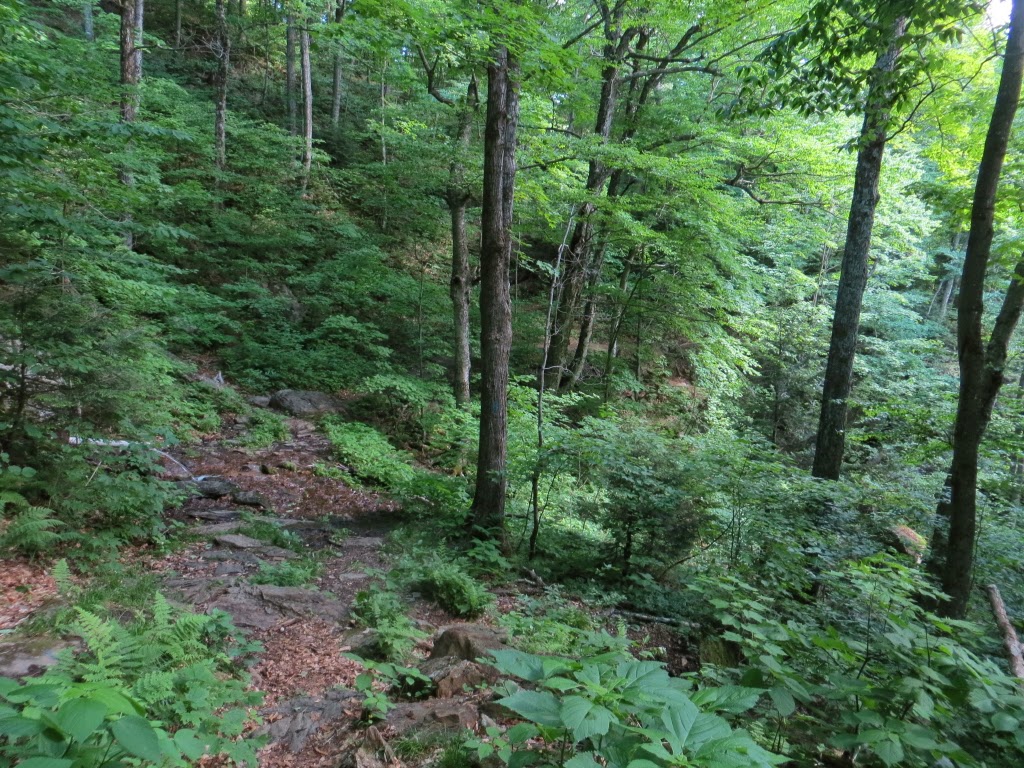 Here there is a piped spring that provides a water source for the Green Mountain Club's Taylor Lodge, a quarter-mile above. 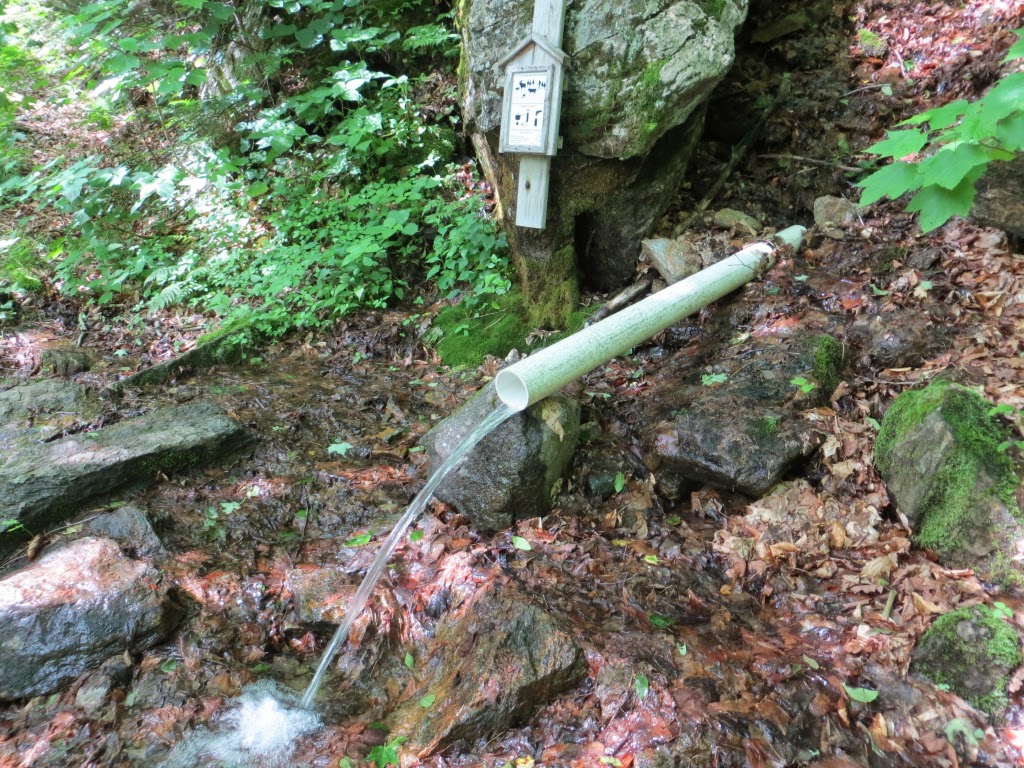 At the east end of the notch the trail passes by a large beaver pond and meadow with scenic views up to cliffs on a spur of Dewey Mountain. What a great backcountry spot! 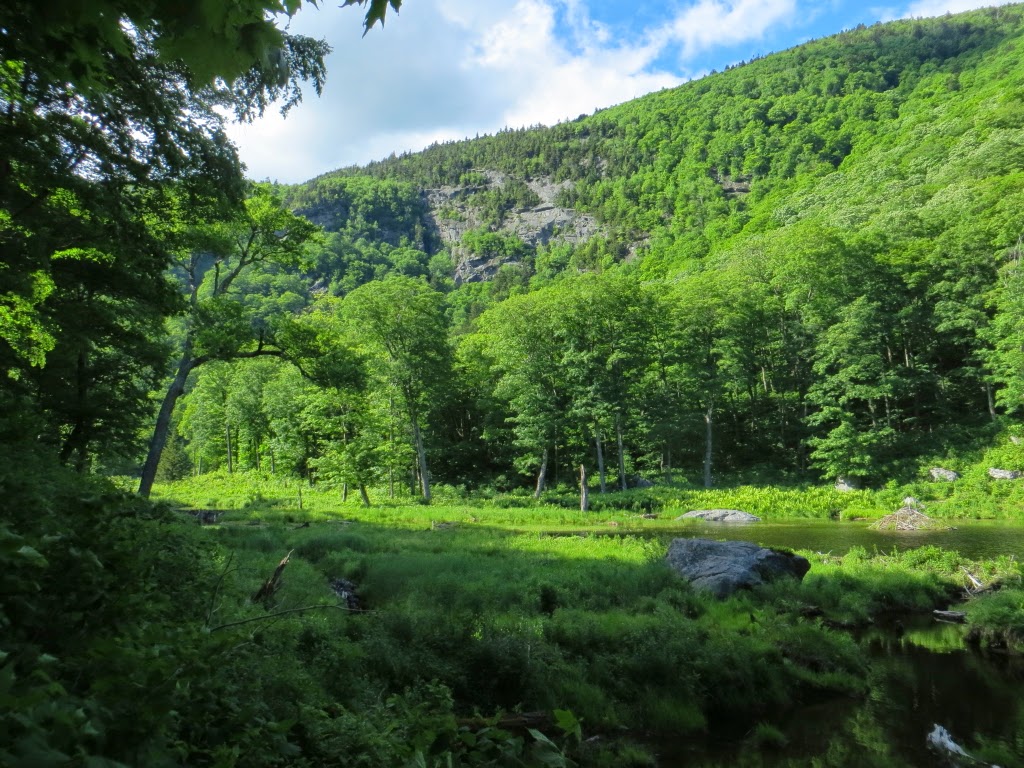 Climbing up the slope, you get a bird's eye view of the pond. 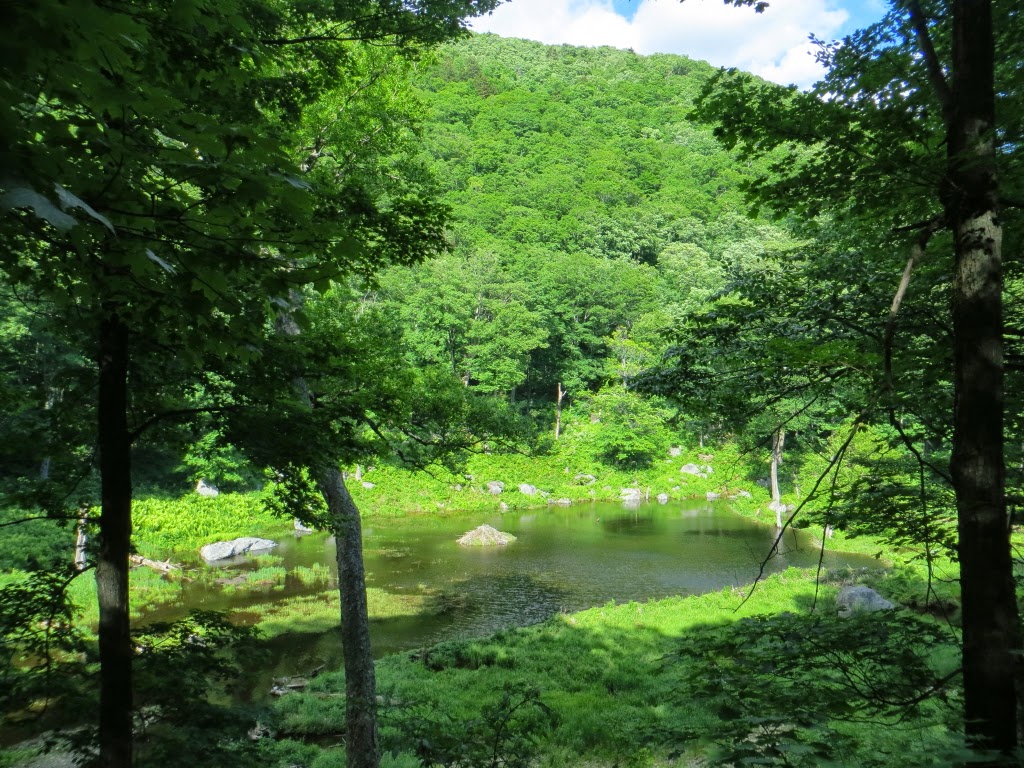 I watched a beaver swim over to his lodge, then dive to make his entry underwater. 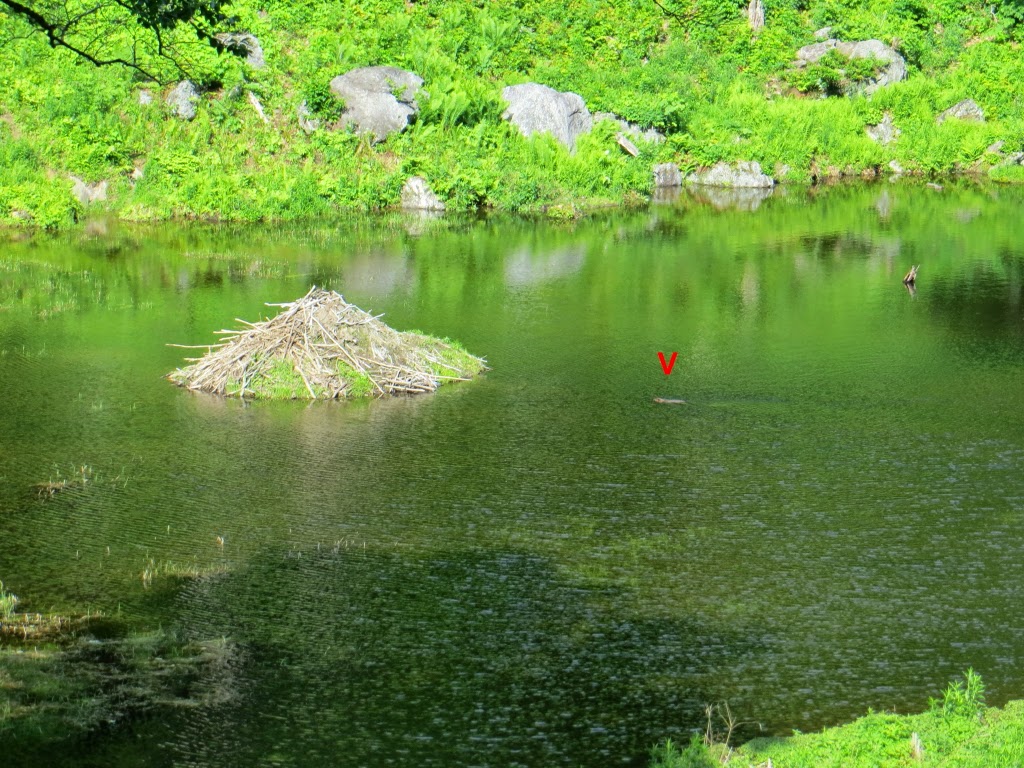 Junction at the top of the climb, where you also meet the Long Trail. 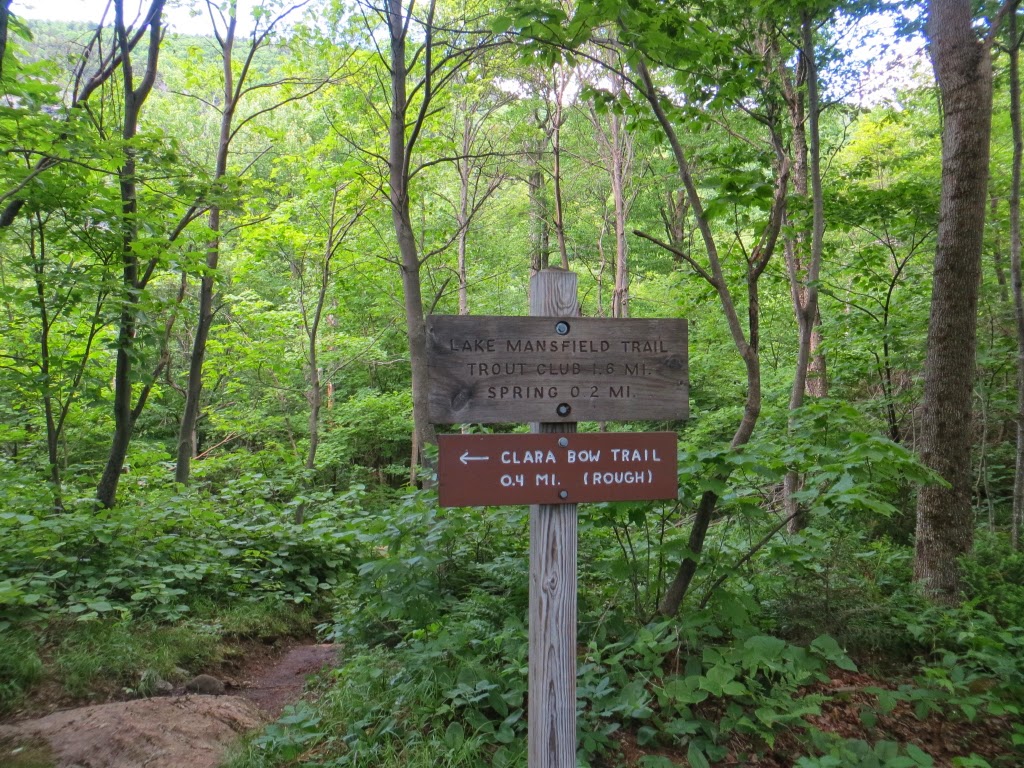 A few yards away is Taylor Lodge, named for James P. Taylor, the original founder of the Long Trail back in 1909. It was originally built in 1926 and called "Nebraska Notch Lodge." It was rebuilt after fires in 1951 (then receiving its current name) and 1978. Two Long Trail thru-hikers were staying there that night. The screening in front is to keep porcupines out. 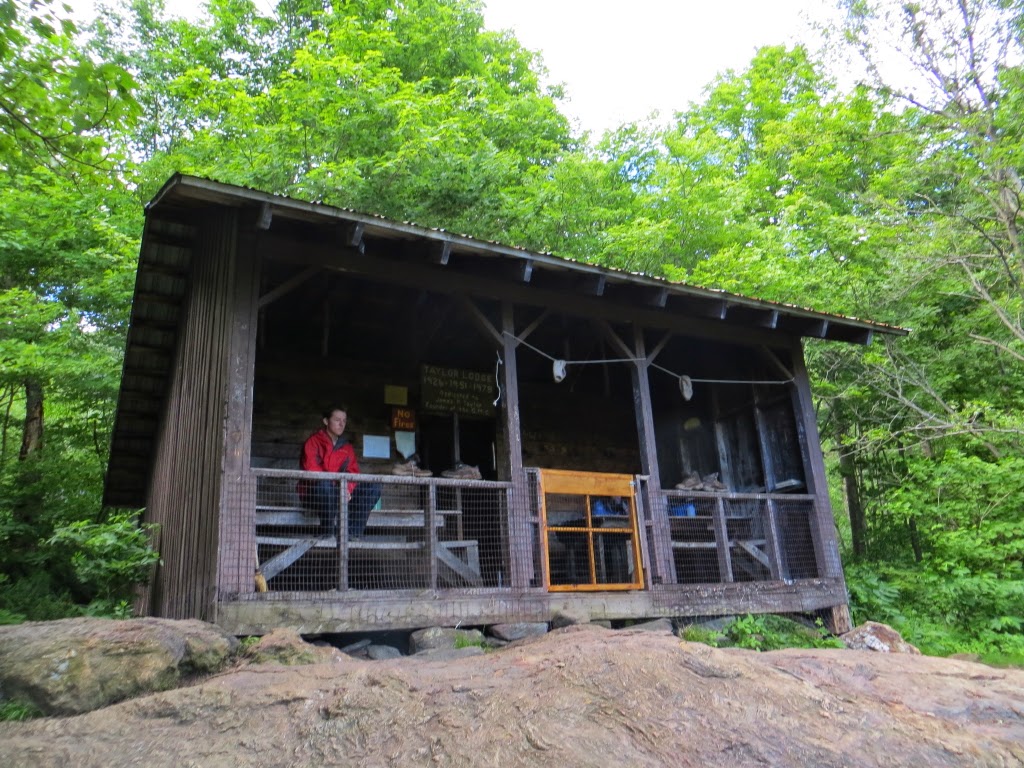 There's a partial view from the front of the Lodge. 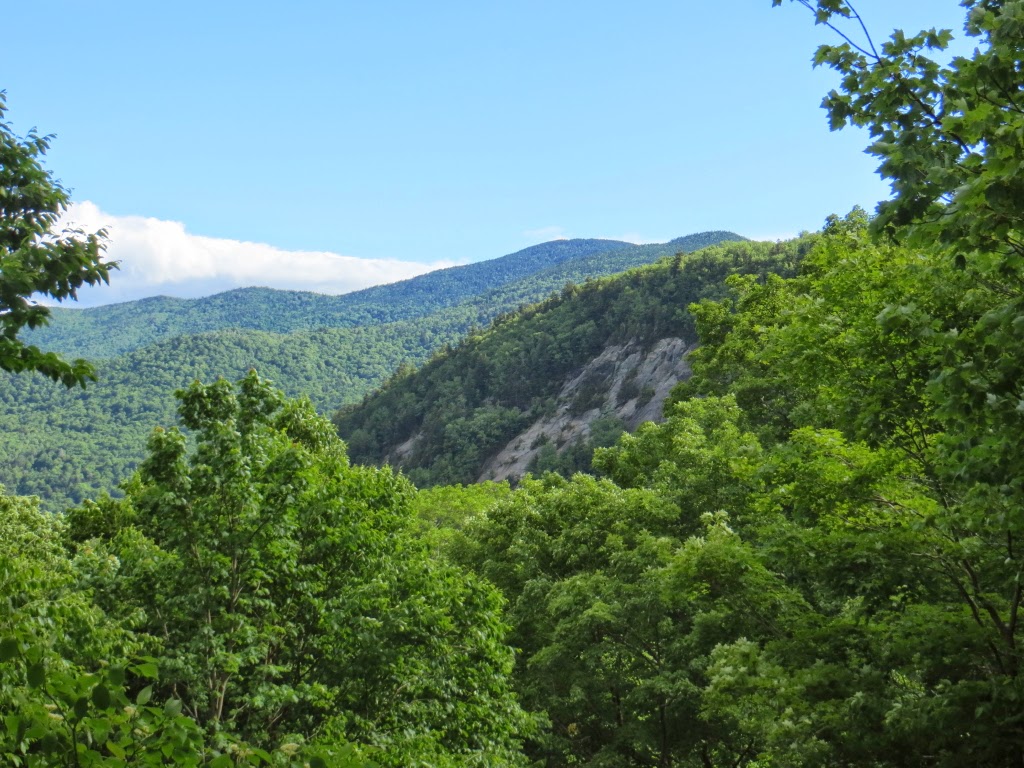 As revealed to us by a summit steward we chatted with on Mt. Mansfield earlier in the day, a short, steep spur path near the lodge led to a great viewpoint overlooking the "Nebraska Valley", the basin drained by Miller Brook, with Lake Mansfield seen on the left. In Sept. 2012 some careless campers had let a campfire get out of control up at what was a natural viewpoint. Many firefighters from the Stowe area climbed up here to fight the blaze, cutting trees and a fire break to help contain it. It was a difficult task, as some of the embers had fallen over the cliff and ignited below. 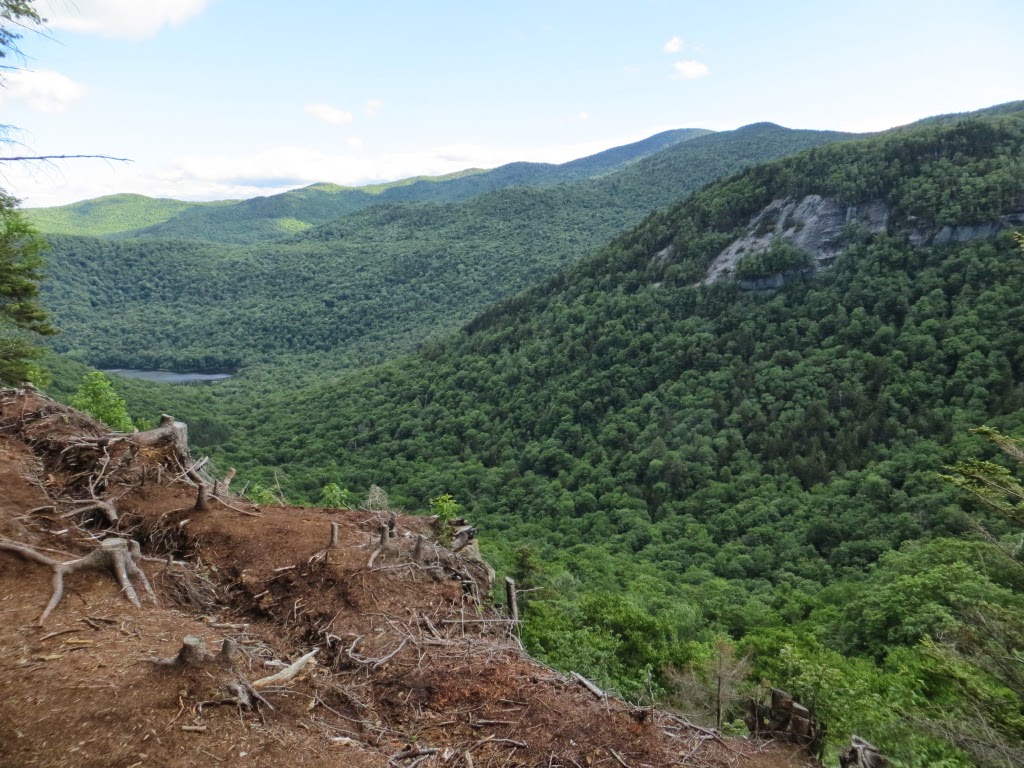 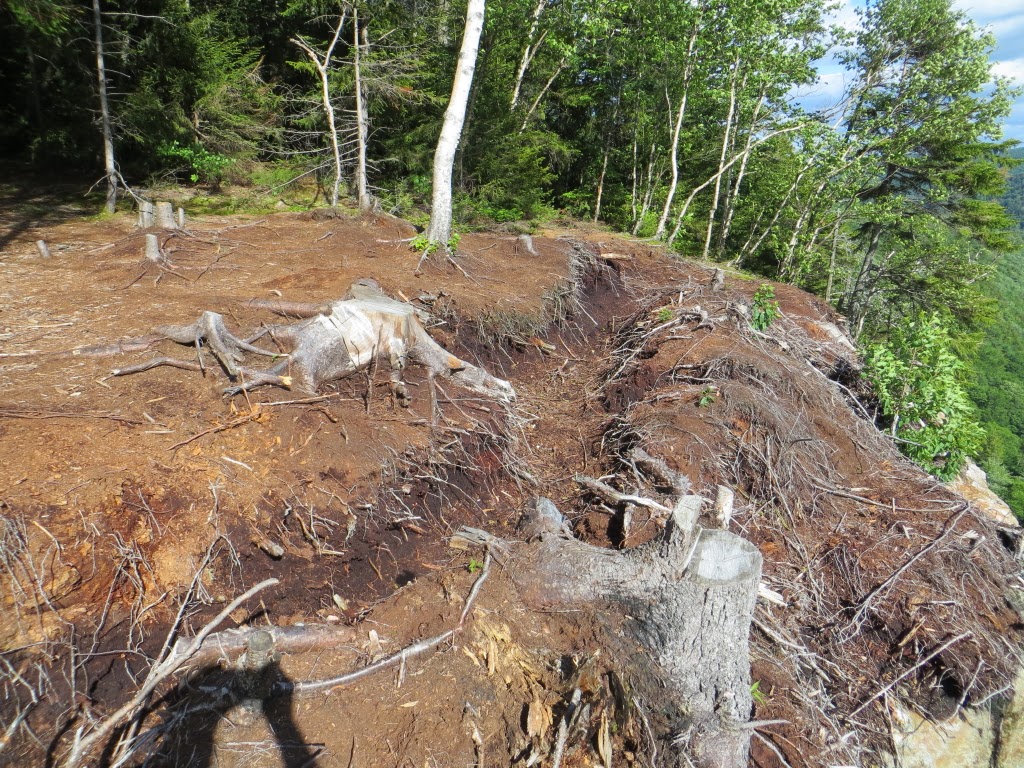 Clark Mountain looming over the headwall of the valley. 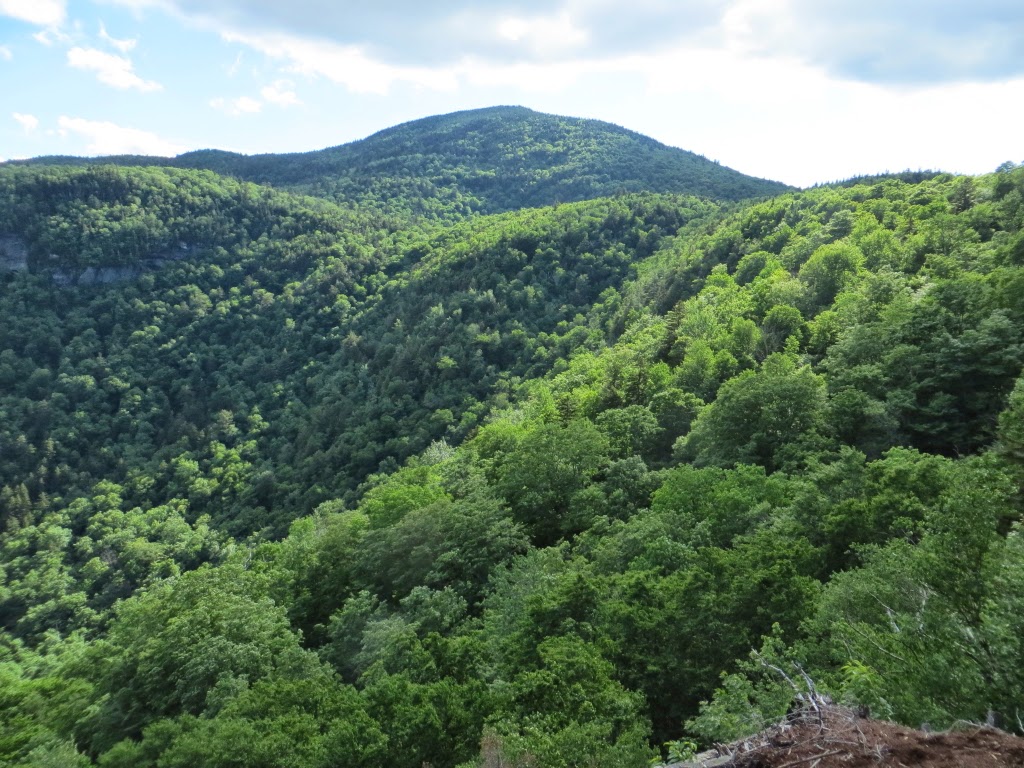 This valley is noted by geologists as having the characteristics of a glacial cirque, with a broad floor and steep sidewalls and headwall. In the background are spur ridges of Mt. Mayo and Bolton Mountain. A beautiful and quiet corner of Vermont. 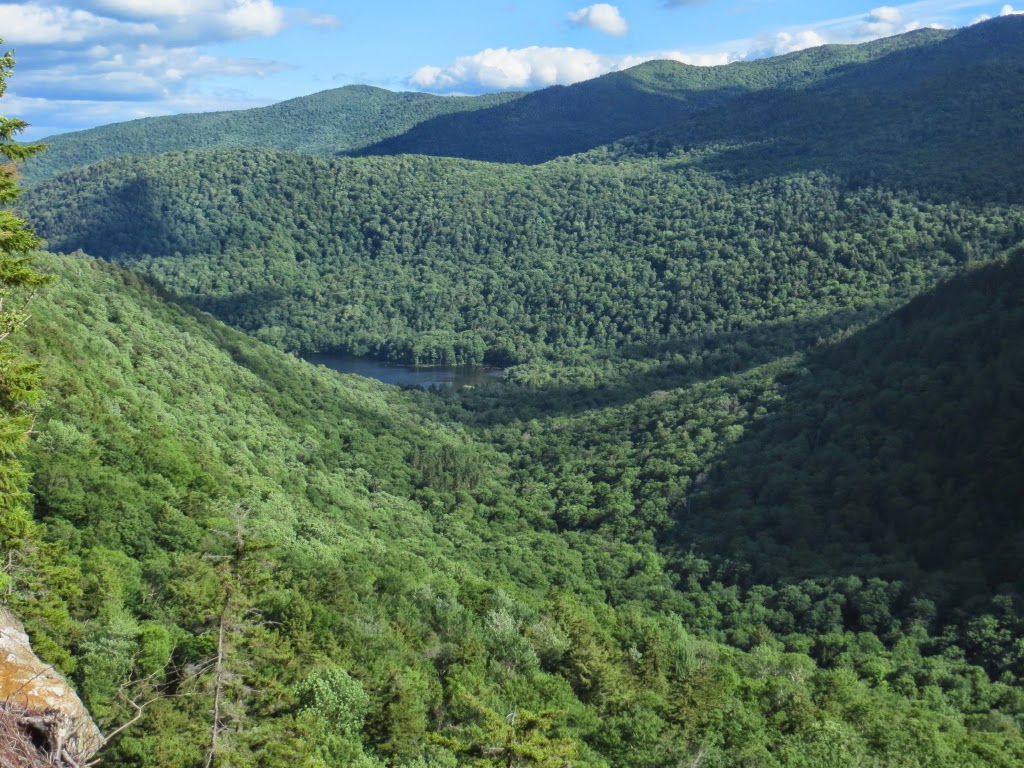 Parting shot of the beaver pond on the way back. 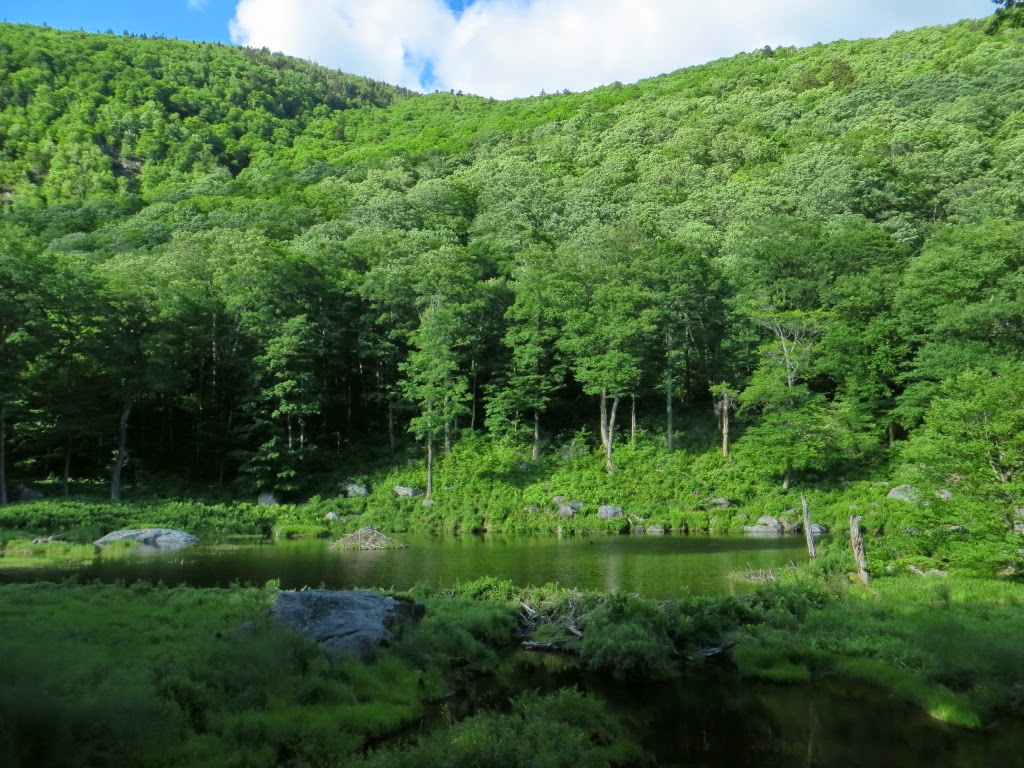 Below the beaver pond, a few steps down from the trail I found this down-look over a waterfall and gorge. What a great little hike, with a waterfall, scenic beaver pond, a rustic shelter and a fine viewpoint. We're looking forward to returning soon to the beautiful Green Mountains. 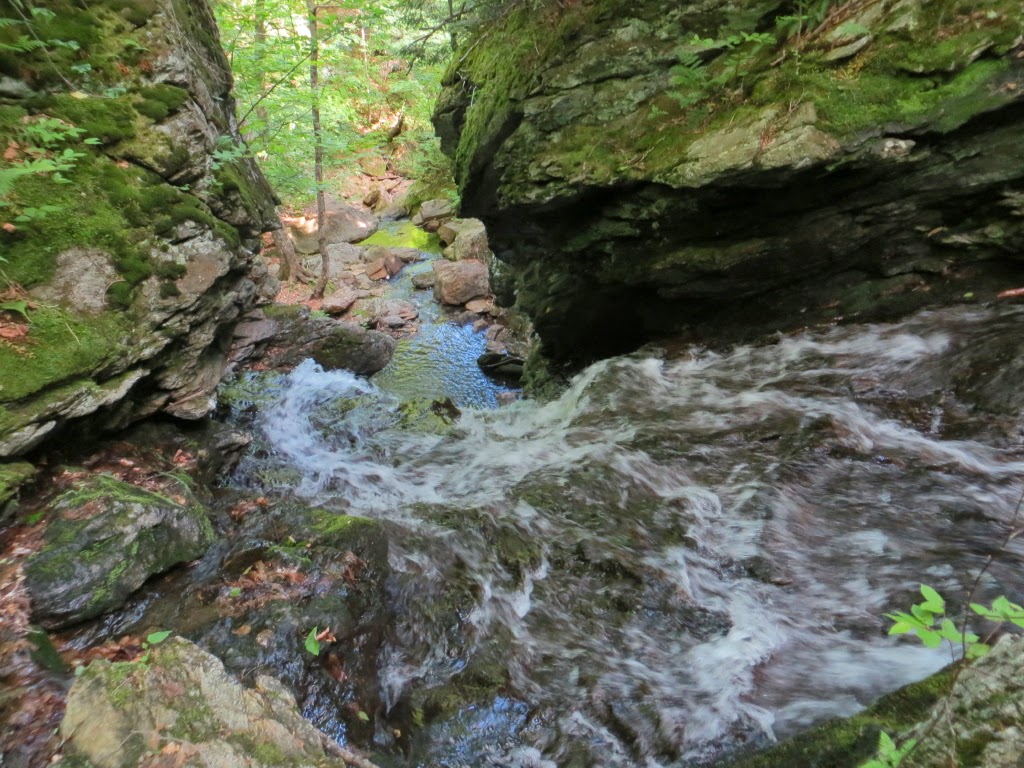